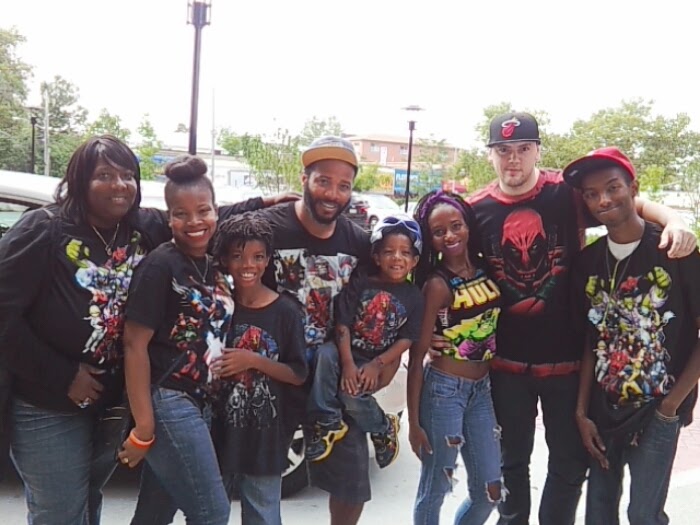 To say that my family loves Marvel Comics is an understatement, we are a bunch of super-hero loving fanatics and my 3 year old lil' monster Tristan and his big brother CJ are probably the biggest fans of the group. Seriously, when Avengers came out on DVD it was the first real movie Tristan had ever watched in it's entirety and although probably not age-appropriate he was fascinated by the characters and loved the action, so much so, that he'd watch the movie repeatedly and you could see his lil' monster fingerprints on the back of the disc because he'd grab it first thing in the morning to watch it again.  I'll never forget the Halloween the boys dressed up: CJ as Thor and Tristan was a baby Hulk because we laughed at the mighty strength he had as a toddler as he effortlessly lifted activity tables and pushed furniture around the house.

The boys, hubby and I were beyond excited when we got our invitation to attend opening night of Marvel Universe Live at the Izod Center last week on July 31st as guests of Feld Entertainment. When I learned about the opportunity to win extra tickets as a social media hero, we took on the mission of tweeting, sharing Marvel themed pictures on Instagram and recruiting other Marvel fans on Facebook to join in on the fun and build excitement for the show. In anticipation we bought Marvel T-shirts and even enjoyed a behind the scenes show on ABC & a super hero Sunday movie marathon on FX prior to the show.

Feld Entertainment is the creative genius behind other great family-friendly shows like Disney on Ice, Monster Jam and Ringley Bros. and Barnum & Bailey circus, so you know they are pros at putting on a spectacular show! If you haven't seen the commercials yet I can best describe Marvel Universe Live as an exciting, live- action, stunt-filled, circus like performance featuring an extremely talented cast that are dressed as your favorite Marvel heroes and villains. Marvel Universe Live features more than 25 characters that we all love, who are battling it out for the Cosmic Cube which is the ultimate source of power. We couldn't wait to see Spiderman, Hawk Eye, Captain America, Thor, Wolverine, Ironman and Black Widow defend the universe against Loki, Red Skull, the Green Goblin, Electro and other enemies, while doing acrobatic stunts, cool tricks during high-speed car chases and while flipping in the air on BMX bikes as they traveled around the world.

My oldest has been to the circus before and other theatrical shows but Tristan had never, so we had fingers crossed that he would like it. The show was captivating for both children and adults with an engaging story-line, colorfully accurate costumes and tons of action and special effects. It almost seemed like my boys never blinked so not to miss a moment while they cheered and clapped for the good guys who were on a mission to put an end to the bad guys evil plans. Without giving away too much detail I will say that I was impressed with how the story-line was easy for even the younger age group, like my 3yr old to follow along and the sets changed seamlessly without ever loosing his attention and the movie-like pyrotechnics and larger than life second half was by far our family's favorite part. Both my brother and brother-in-law admitted after the show, that they'd never seen anything like Marvel Universe Live when they were kids. 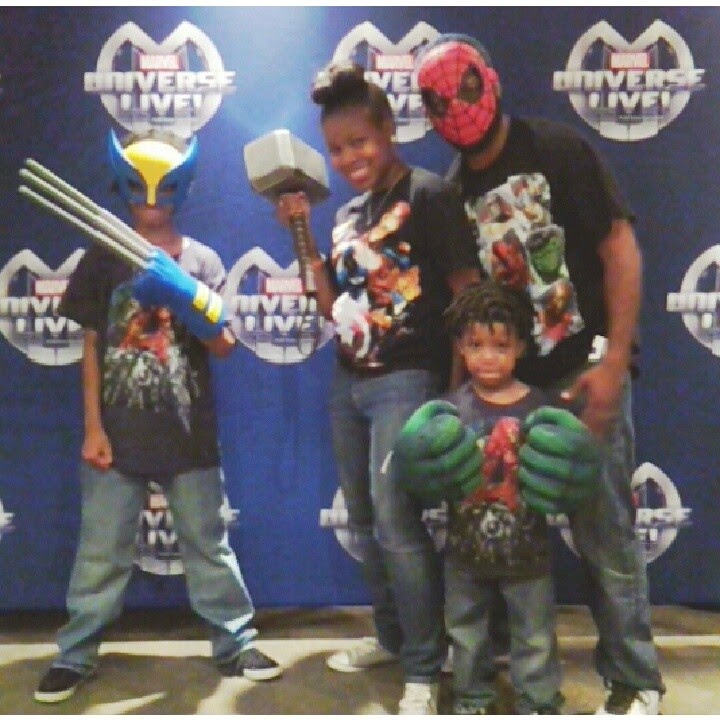 When we arrived at the Izod Center we got to hang out with our favorite parent bloggers and their kids in the Winners Circle, where we noshed on yummy finger foods like mini burgers, hot dogs, chicken tenders, pretzels and popcorn. The kids were excited to play around with Marvel props, and I kept saying Thor's infamous line "You want me to put the hammer down? I'll put the hammer down!" because in my house, mama is boss! Lol. I have to tell you though that hammer I'm holding was the real deal, it was really heavy and we couldn't imagine Thor flying around with that thing, let alone throwing it at bad guys all the time.  CJ couldn't get too close to us in the picture because according to him Wolverine stands alone because of his temper.


After taking a few photos we headed to our awesome seats, the boys and I sat across the arena from our family who were with other social hero winners in the center third row, so some of the pics you will see are from their perspective. But trust me any seat is a great vantage point to see this amazingly choreographed show, you won't miss any of the high-flying fun that makes full use of the arena floor. Make sure you are prepared to purchase the fun goodies that will be tempting your kids in the aisles, everything from character masks and whirling Spiderman decorated webs that light up to Marvel themed tumbler cups and bags of cotton candy that are too cute to resist. Also have your camera on hand to take some great pictures but remember to live in the moment and enjoy the show because there's a lot to be seen in the 90 minute performance. 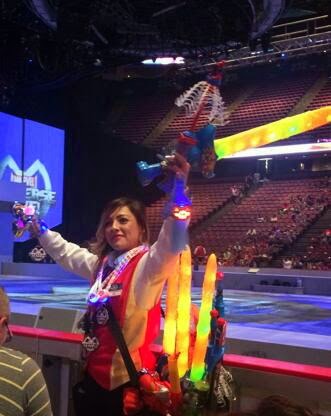 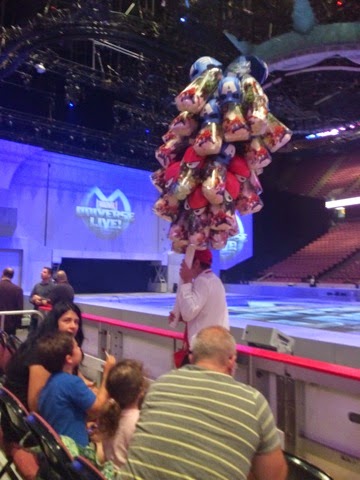 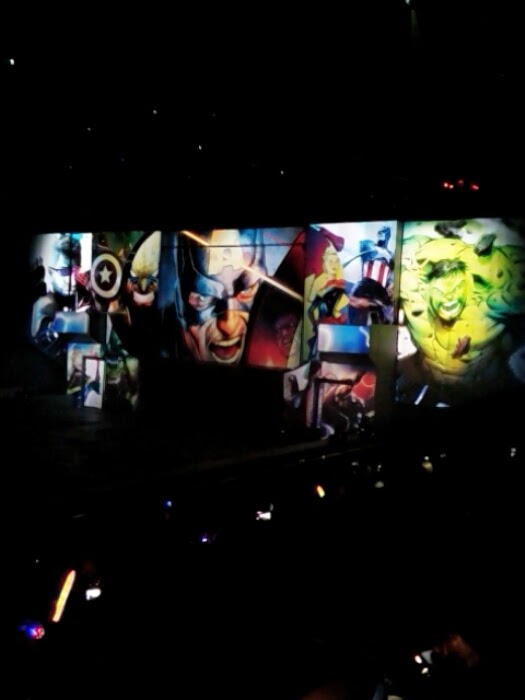 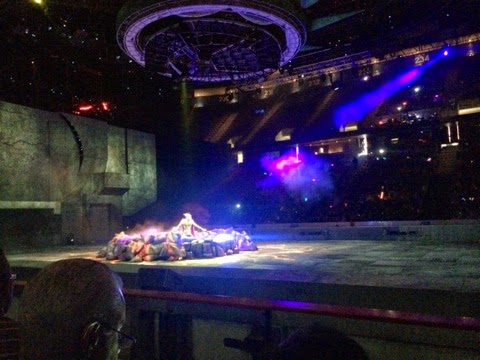 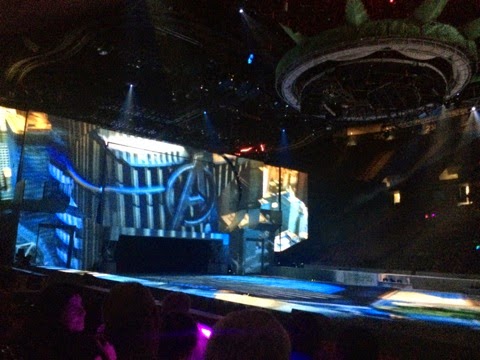 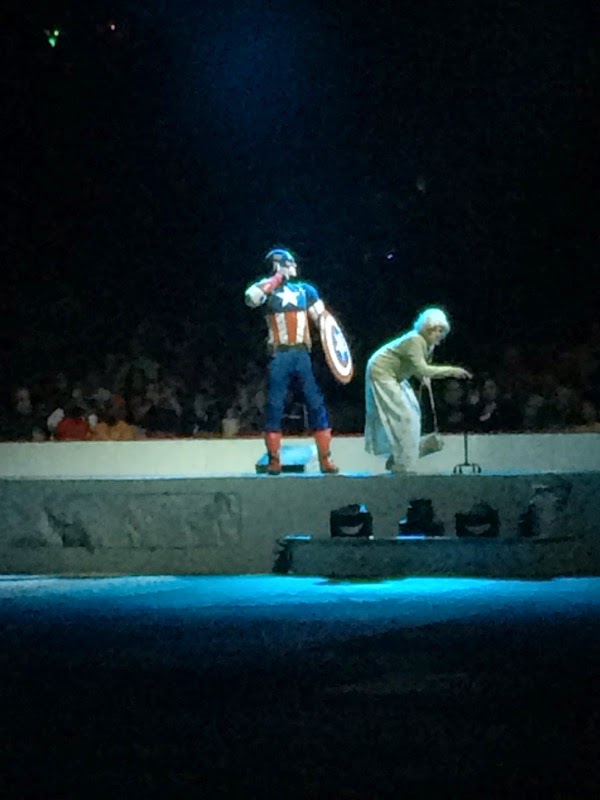 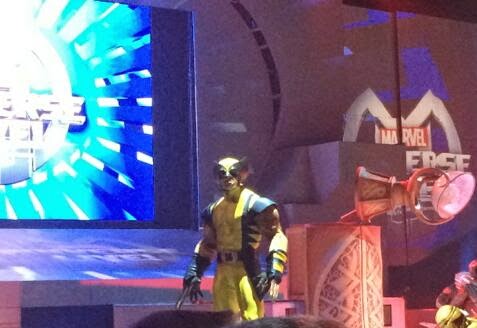 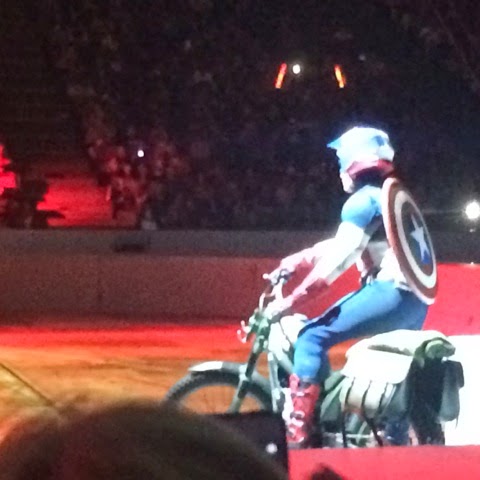 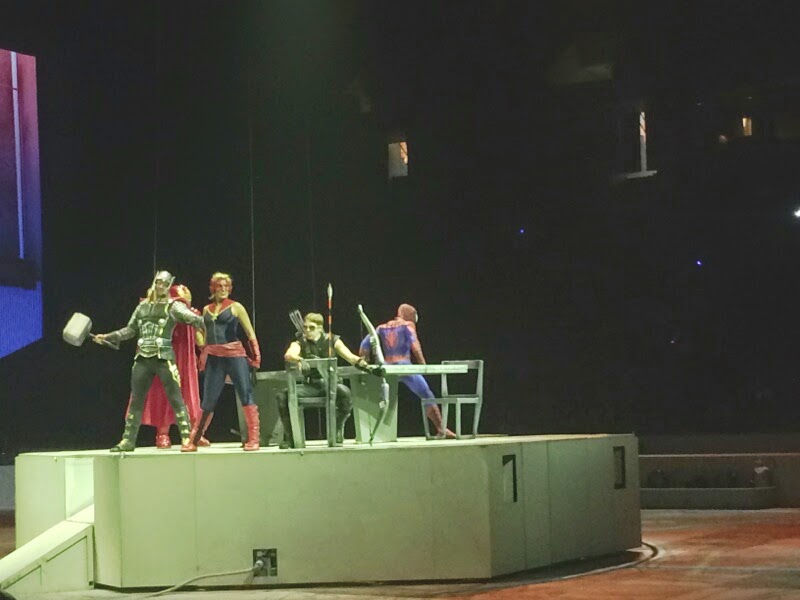 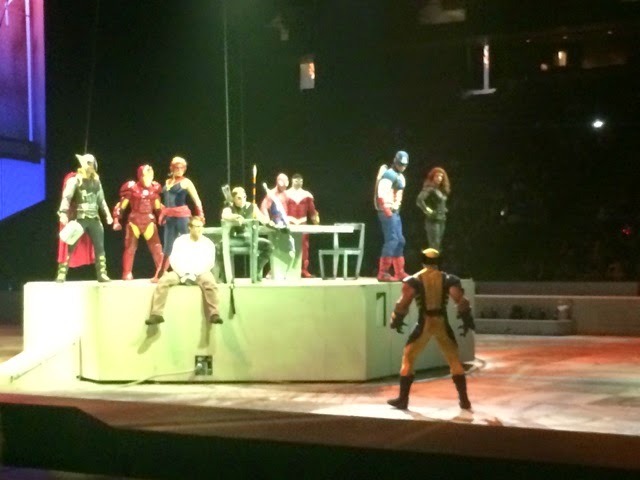 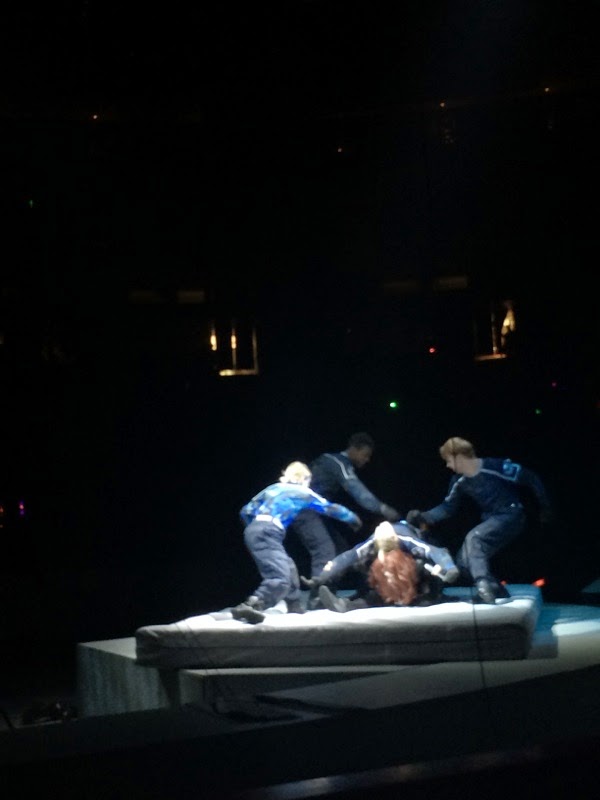 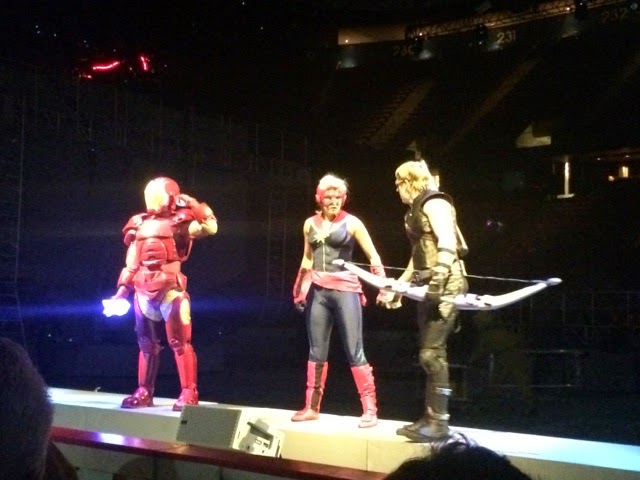 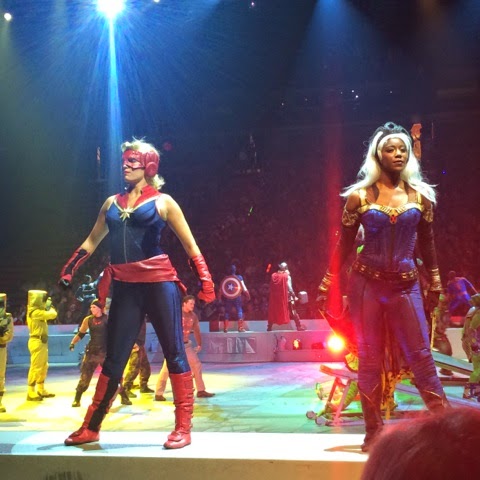 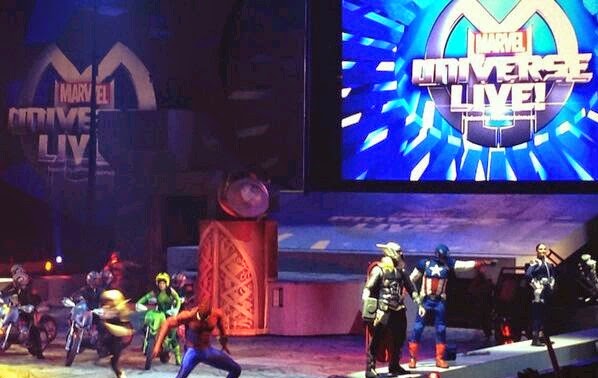 There is still time to witness your favorite Marvel characters join forces in an epic battle of good vs. evil so don't miss out on the fun! Marvel Universe Live will be at the Izod Center in New Jersey only until Aug. 10th before moving on to the Barclay Center in Brooklyn from Aug. 13th-17th and then Nassua Coliseum from Aug. 21st - 24th . For Further details head to the Marvel Universe Live site and stay updated and follow all the excitement on the Marvel Universe Live Twitter, Facebook , Youtube and Instagram pages. Now go grab your Marvel loving friends and family and assemble for a spectacular show!

*Disclosure: We were not compensated monetarily for this post, we received tickets to opening night in order to do this review and my children received goodie bags. Opinions expressed are 100% my own.