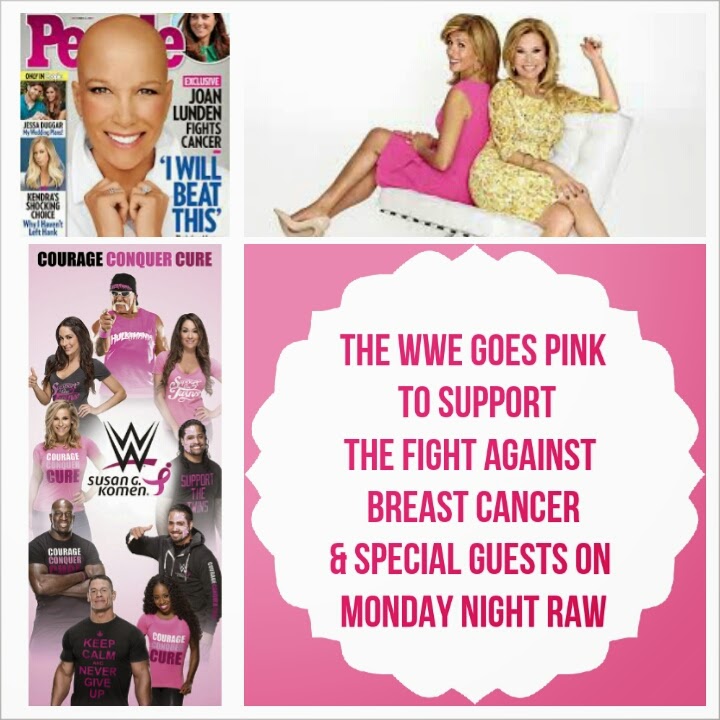 Last week (Monday, Sept. 29, 2014) we were tuned into Monday Night RAW and  my two boys actually noticed rather quickly that their hero John Cena was rocking a new t-shirt which read "Keep Calm and Never Give Up", they also realized that the ring's middle rope was turned pink, which allowed me to open up a quick discussion with my 9 yr. old CJ about the WWE teaming up with Susan G. Komen to help promote the fight against breast cancer.

If you haven't been watching recently, as a WWE brand ambassador and a niece and cousin to women who have battled with breast cancer,  I thought it was pretty awesome to share that for the month of October, the WWE Superstars and Divas will wear co-branded Komen and WWE apparel and all WWE platforms will “go pink.” The “Courage Conquer Cure” campaign will continue throughout National Breast Cancer Awareness month, and WWE will donate to Komen 20 percent of the retail sales price of all co-branded merchandise sold on WWEShop.com and at WWE live events, as well as 5 percent of all other WWE merchandise sold on WWEShop.com. For the first time, fans will have the option of donating $1, $5 or $10 upon checkout from WWEShop.com with all proceeds benefiting Komen.

Susan G. Komen and WWE have a history of success in raising awareness and funds for the fight against breast cancer. The partnership launched in 2012 with the successful “Rise Above Cancer” campaign and has generated more than $1.2 million for Komen to date. The two organizations also partnered for “Make Mom Proud,” a campaign that coincided with Mother’s Day and called on supporters to do something meaningful for their moms and other important women in the their lives. This past May, Komen and WWE teamed up again for National Women’s Health Week with a campaign to remind women how a healthy lifestyle is critical in the fight against breast cancer.

Tomorrow, the lively, funny and entertaining co-stars of NBC TODAY’s fourth hour are putting down their wine glasses and joining WWE® as guest stars on MondayNight Raw® on October 6 at 8PM ET/7PM CT on USA Network.

Kotb, who is a seven-year breast cancer survivor, and Gifford will join WWE for its third consecutive year supporting Susan G. Komen and National Breast Cancer Awareness Month. Before Kotb and Gifford rule the ring, WWE Superstar John Cena® will make a guest appearance on the TODAY show in the iconic fourth hour segment to give them a pep talk to prepare for the show.

Additionally, journalist Joan Lunden, who was recently diagnosed with breast cancer, will sit ringside as a special guest along with other breast cancer survivors. As TODAY’s special #PinkPower correspondent for Breast Cancer Awareness Month, Lunden is celebrating survivors, supporting those currently battling cancer and remembering those we have lost. Lunden was also featured on the cover of last week’s People Magazine talking about her personal fight against breast cancer.


I passed a magazine stand in the subway just this week and actually stopped in my tracks because her cover photo was just so beautiful. Joan Looked strong and empowered! Having been diagnosed with a chronic auto immune disease like Crohn's I have to get checked annually for colon cancer. I know it takes a lot of strength to believe that you can persevere and beat the illness.

“WWE is thrilled to have Kathie Lee Gifford, Hoda Kotb and Joan Lunden join Monday Night Raw to help shine a light on the battle against breast cancer,” said Stephanie McMahon, Chief Brand Officer, WWE. “These women continue to be a voice for the millions that are affected by this devastating disease. We are honored to have their support in raising awareness and funds to continue the fight.”


*Disclosure: As a WWE brand ambassador and a family member & friend to several women who have persevered through this disease that strikes both men and women, I am happy to share this campaign with readers. I was in no form compensated for this post.