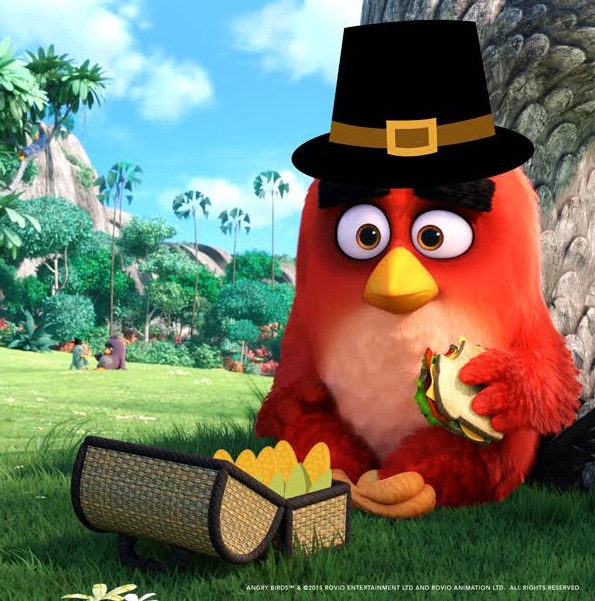 With Thanksgiving day only 2 days away I've got to tell you in all honesty I'm not a fan of the infamous bird for dinner. I know it's tradition, I know if you add a little tart, yet sweet cranberry sauce or marshmallow covered yams on the side, it jazzes up what I'd find to be really dry and turns it into something a little tastier. But I'd much much rather have a savory ham! And funny enough just yesterday a handful of NYC local bloggers were invited out to a "Birdless" Thanksgiving feast with all the fixings by Sony Pictures to get sneak peaks at the upcoming  3D animated, 2016 summer release of  The Angry Birds movie & to celebrate the NEW "Red" Angry Birds balloon being featured in this year's 89th annual Macy's Thanksgiving day Parade.

Of course it was fitting that the main dish was a pig roast because these adorably colorful yet feisty and comedic birds are not fans of chowing down on other feathered friends but would sacrifice a pig in a heart beat. If you're not familiar with the family friendly games from Rovio (with players having downloaded more than 3 billion Angry Birds games) it's an all out battle between the birds and those bad, egg stealing piggies which will be no different in the upcoming film where we'll discover why these birds are just so angry! 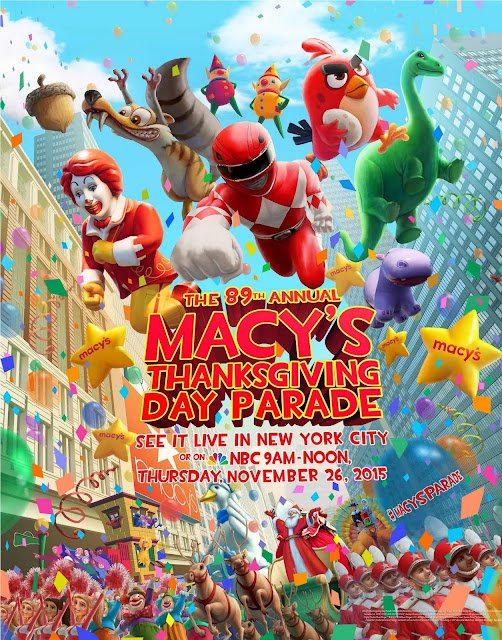 It's always amazing to see how many millions of people both that live locally and travel from all over during the wee hours of the morning to see this parade. It doesn't matter how old you are, how early or cold it may be or whether you're down on the streets or peaking down from the windows in the warm & toasty buildings over-looking, The Macy's Thanksgiving Day Parade is one of the best NYC traditions I've ever witnessed and implore everyone to do at least once!  As a kid my mom would layer us to the point where we thought we couldn't actually walk, make hot chocolate and feed us a hearty bowl of apple-cinammon oatmeal before we trekked uptown to the top of the parade at 5am and proudly claimed our spots on the city sidewalk located near food and the closest restroom, of course! And not surprisingly her efforts to make the day special were well after she spent hours in the kitchen preparing our holiday meal the night before. Attending the parade is one of the highlights of this time of year for me, whether i'm out there intermixed with the enthusiastic crowds or watching it live on T.V

There's nothing like the wonderment you can see glimmering from the eyes of lil' monsters as they sit perched on their parents shoulders & their eyes cascade quickly from the ginormous helium balloons drifting by to the vibrant floats who carry kid friendly tv characters and pop stars who energetically dole out songs  & high fives to all down below. 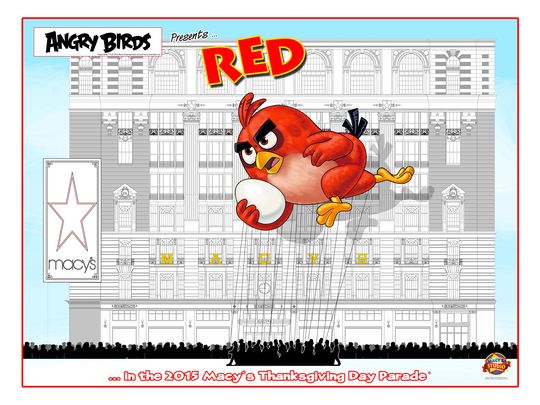 The new "Red" Angry bird surely won't disappoint in comparison to other anticipated balloons from years past - at a whopping 45.5 feet tall and 44 feet long. Amy Kule, executive producer of Macy’s Thanksgiving Day Parade in a statement for USA today said  “With his trademark angry look, but lovable personality, Red will protect his precious egg as he takes flight down the streets of Manhattan and into the hearts of millions of spectators lining the Parade route and tens of millions more watching from homes across the country.”

Just like the parade, the ever so popular Angry Birds games and weekend trips to the movies allow for families to spend quality time together and we can't wait to see the new balloon take flight this Thanksgiving and the fun-filled movie next summer!

Have you ever experienced  the parade in person before? Do you have a favorite Angry Bird you're looking forward to seeing in action in the movie?

Disclosure: All opinions expressed are 100% my own. No compensation was received for this post.
Posted by Dellah at 9:44 AM