The Release of Disney's Aladdin Diamond Addition with The Moms #AladdinMoms 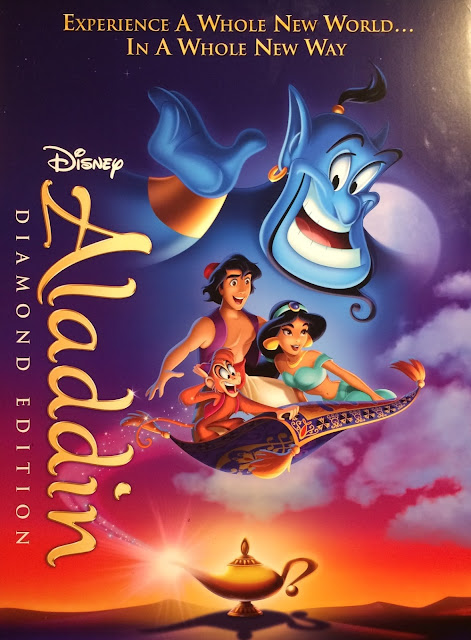 Aladdin has always been a favorite Disney movie of mine & I'm happy I got to share it with my daughters, Naya 4 and Lanna 2. My girls have watched movies before but this was their first time watching one in a real movie theater, buttered popcorn and all. It was so much fun singing along and watching it with them through their eyes during the screening event with The Moms Network. 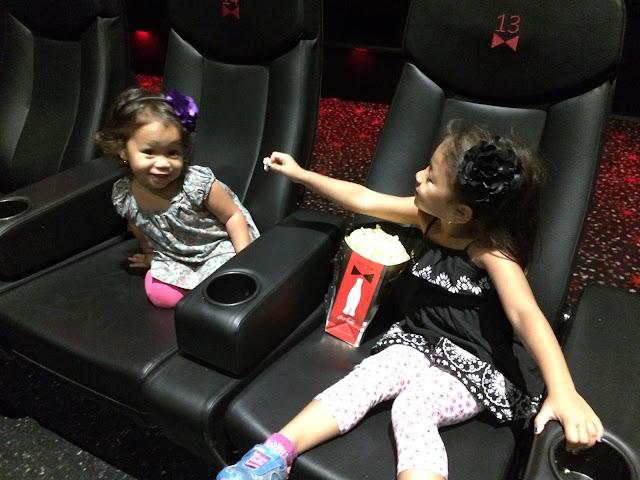 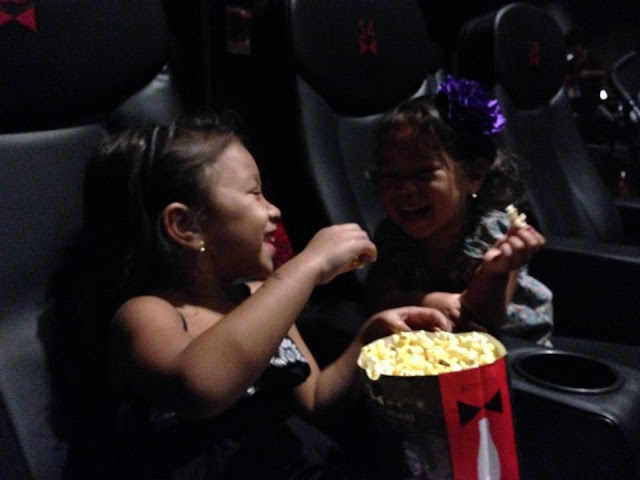 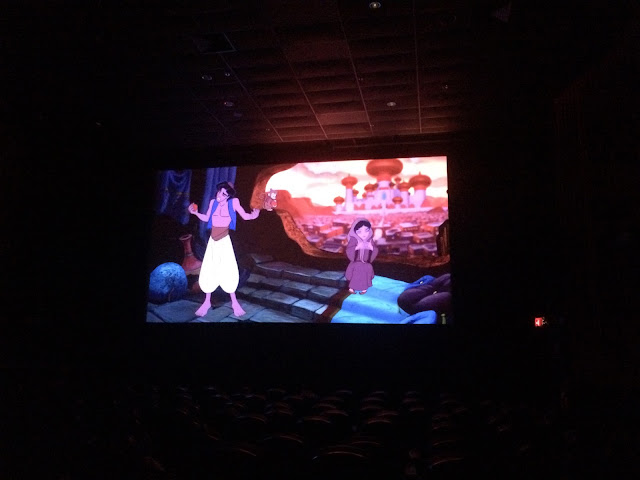 Aladdin and Jasmine have always been great role models: Aladdin is so determined and was out to prove that he was more than just a street rat while Jasmine was strong willed and wasn't the type of princess that just wanted to get married.  Princess Jasmine was the first Disney princess doll that my older daughter owned. There aren't that many dolls of color out there and I felt it was important for my daughters of mixed heritage (Trinidadian and Filipino) to have dolls that looked more like them. 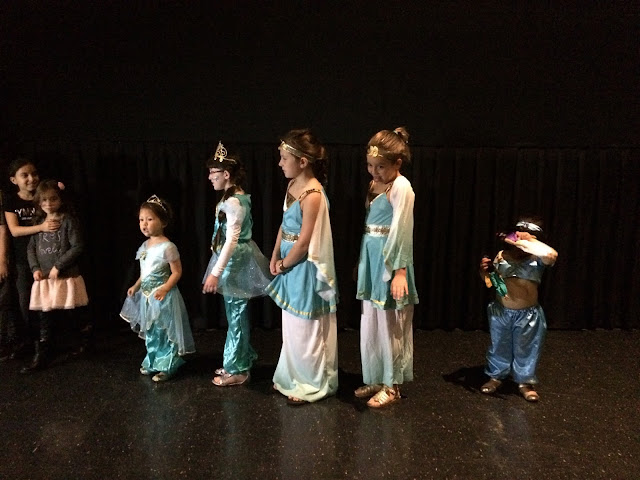 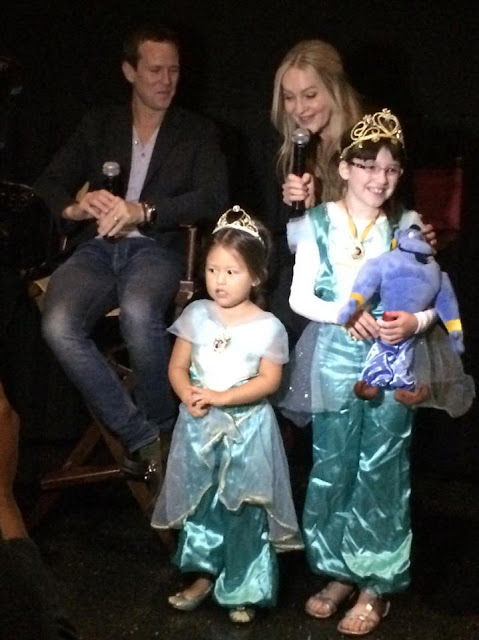 The kids were so adorable in their Jasmine costumes and got to show them all off on stage. After the movie we were lucky to have Scott Weinger and Linda Larkin, the voices of Aladdin and Jasmine make an appearance and answer questions from the audience. Weinger may look familiar to you if you were also a fan of a little show called Full House in the 90's. He played DJ Tanner's boyfriend Steve on the show. He mentioned how he actually took Candace Cameron to the screening of Aladdin when it opened in 1992. Both Weinger and Larkin we're excited to be sharing Aladdin with a whole new generation again. 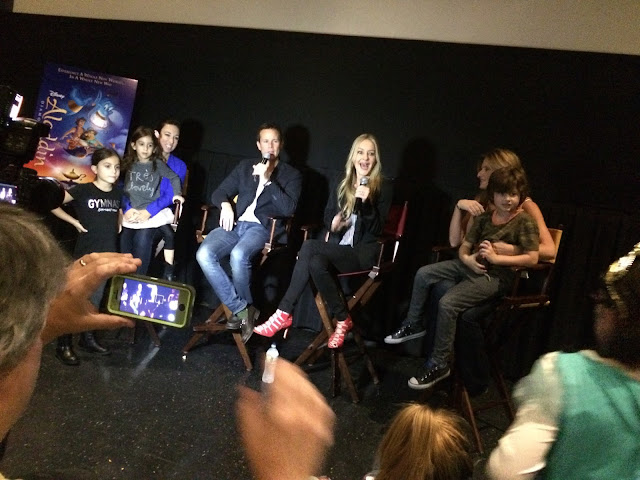 Surprisingly Weinger's 6 year old son, Mischa has only recently seen the film. It's one of those movies that is perfect for boys, girls and even adults. Larkin said, "The Genie resonates with adults, there are jokes in there that I got when watching it again." Both Weinger and Larkin were visibly emotional when an audience member asked who played the voice of the Genie. Weinger gathered himself and replied, "A great actor named Robin Williams played the Genie."  It was also my first time watching the film after his passing over a year ago and I too got emotional.

The two answered more questions from the audience, "Is there going to be an Aladdin 2?" They're too young to know that there was already a sequel. Weinger mentioned a few that went straight to video, Aladdin and the King of Thieves and Return of Jafar. Larkin adds there was even Aladdin the series.  One of The Moms, Melissa Gerstein asked, "Have you seen the Broadway show?" They actually were on their way to see it that afternoon. I think Naya actually saw it on Broadway first before she saw the cartoon movie. I loved how they really brought it to life!

When they're not playing Aladdin and Jasmine, Larkin is a New Yorker and does a ton of voice over work, most notably on the Royal Caribbean seashell. She's traveling to Florida and California promoting the release of @Disney's Aladdin Diamond Edition. While Weigner is based out in L.A. writing and producing, most recently for Black-ish and Galavant. 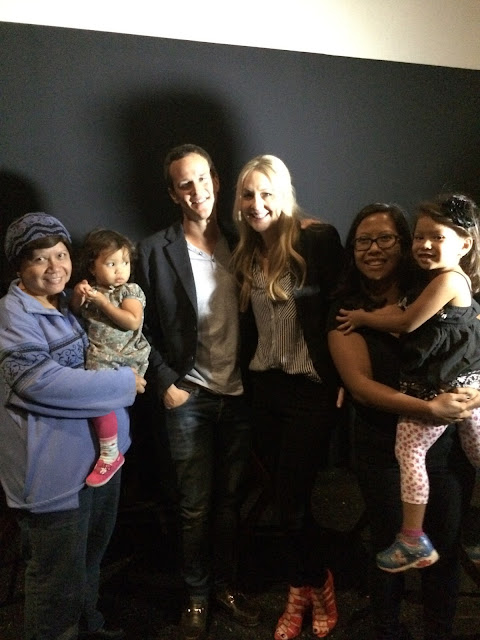 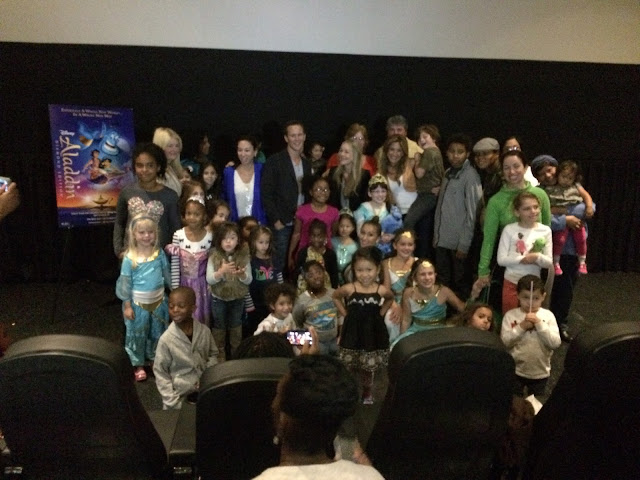 Disney's Aladdin Diamond Edition is now available in stores nation wide and would make the perfect gift for kids of all ages! A special thank you to The Moms for having us.

What's your favorite scene from this classic Disney

Contributor: Grace Andrews is a Queens mom to two little girls, 4 and 2. She loves taking them on adventures all over the city. When she's not busy doing that, she works in the Education Department at the New York Hall of Science (NYSCI). Opinions expressed are 100% her own and she received no compensation for this post.
Posted by Dellah at 7:44 AM