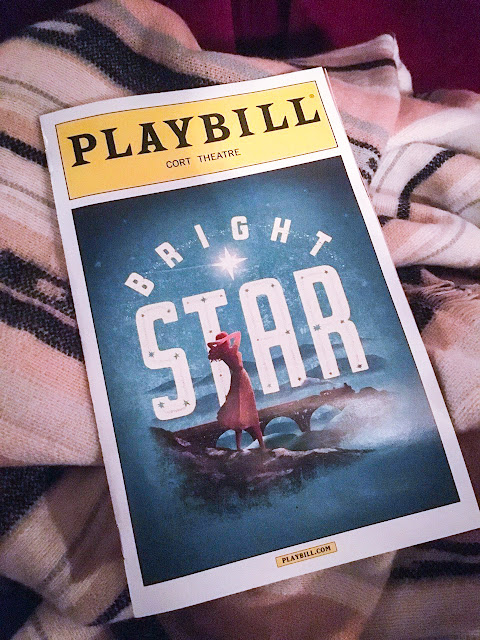 We don’t usually do date night – not with any regularity anyway. Special occasions – sure. But we don’t have date night penciled in on the calendar every 4 weeks. The reasons for this are usually strictly logistical. Firstly, my husband works long hours often and without much notice. Secondly, we have three kids, 3 grandparents working full-time and one PhD-pursuing auntie which means child-care has to be arranged weeks in advance. So, as much as I would love to have a nighttime rendezvous to look forward to every month, the realities of successfully coordinating the busy schedules of my hard-working family make regular date nights a fantasy I rather not tease myself with.
All that being said, I completely understand and whole-heartedly believe in the benefits of date nights. To put aside the time for your spouse, away from work and home, kids and coworkers; to have some else cook your meal for you , pour you a drink and then clean it all up afterwards; to go to the movies, to the gallery, to the park, to go dancing; it all helps. It gives you time and proximity. If I can get my husband to myself for 3 hours outside the house – that’s major! We operate on completely different terms then.  It’s not only what we talk about that changes but how we talk to each other. And if our date gives us something to talk about other than “our daily bread” – well, then we are that much better for it. So when Danielle dropped these tickets in my lap to go see “Bright Star” on Broadway, I did everything in my power to make it happen.


Disclosure: We were provided complimentary tickets to review this show, opinions expressed are 100% our own. No other compensation was received.
I was doubly motivated, you see. Recently, we’ve had plenty occasion to celebrate with our family – Easter, a few birthdays in a row, out-of-town guest, dinner parties. But it’s been a very long time since the two of us went out on the town. More importantly, however, my husband loves Broadway shows. He’s a very musical person. He plays a few instruments and he sings. When he first started taking voice lessons as a child, he was taught to sing show tunes and they have stayed dear to him all these years later. So I knew that a chance to see a new Broadway show would help him get out of work just a little bit faster. I arranged for Grandma to stay with the kids, I carved out some time to slap on some make up, I threw on a shoe with a heel on it and headed for the train. 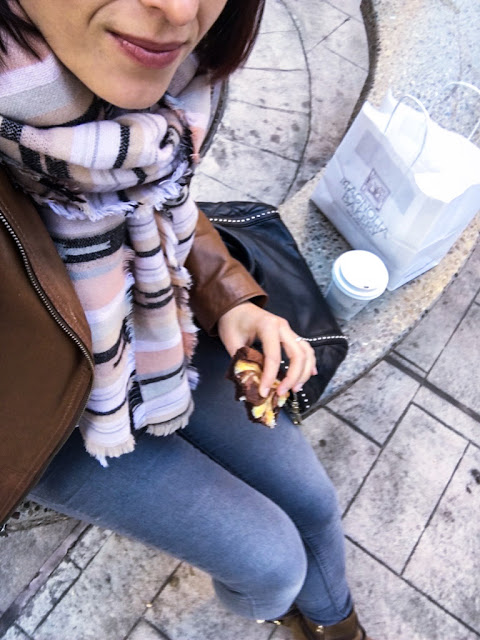 Now, the evening did hit a snag early on. My husband couldn’t get out of work as early as he had hoped. That left me with a good 30 minutes to kill. Not one to complain about having a bit of “me time” in the city, I grabbed something to nibble on from Magnolia Bakery (a marble brownie for me and a red velvet cupcake for him), parked myself on a bench on a plaza across the street and did some most enjoyable people-watching during peak rush-hour pedestrian traffic. Once my husband arrived, we made our way to the theater. 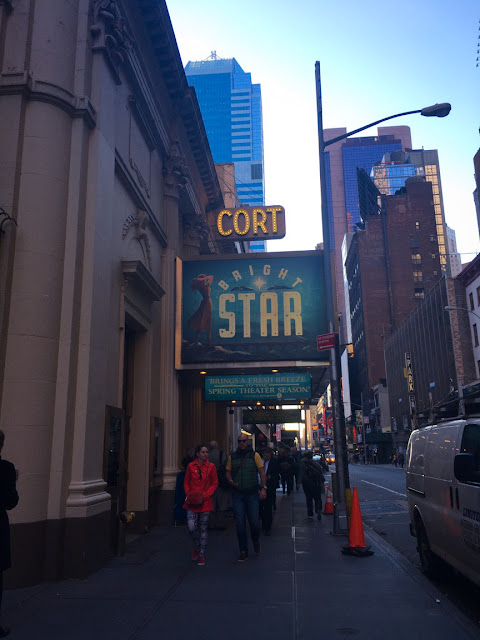 Walking into the Cort Theatre, I was struck by how cozy and intimate it was. As we settled in our seats, I started feeling that tingle of anticipation. It honestly surprised me. I haven’t felt like that about a Broadway show in a while. Then I realized there were a lot of layers of newness to this new show. Yes, it’s new in the sense that it did just open a few weeks ago. So it was exciting because we were going to see the original cast on stage playing to a packed house. But there was something else. 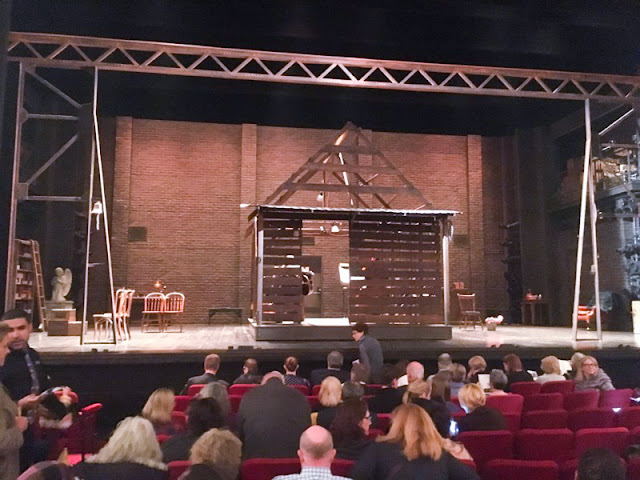 “Bright Star” has an original story, score and lyrics which for us was quite refreshing. You see, the last few Broadway shows we saw featured popular music repurposed for the stage – “Rock of Ages”, “On Your Feet”, “Jersey Boys”. Going into those shows we essentially knew what we were going to hear, it was just a matter of how the songs would be used to facilitate the story. Sitting in our seats, waiting for “Bright Star” to begin, I suddenly realized I was excited not to know what was coming. And once it did come, it was great.

Overall, the show is a very enjoyable experience. The bluegrass score gets your toes tapping. The storyline is written very well and fills the space with flashbacks, life-altering family secrets and two love stories. This seems appropriates since the main protagonists are writers. But here’s what struck me the most – the story is told without a hint of irony, without a single “wink, wink, nudge, nudge” to the audience. It chooses optimism, confidence and gumption as its themes and is unapologetically genuine, hopeful and bright (like the title says) even in, or perhaps especially because of, life’s darkest moments. It does this and still manages not to be saccharine. 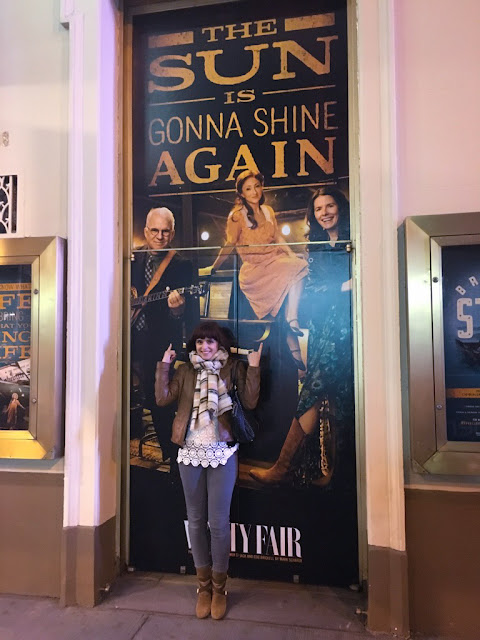 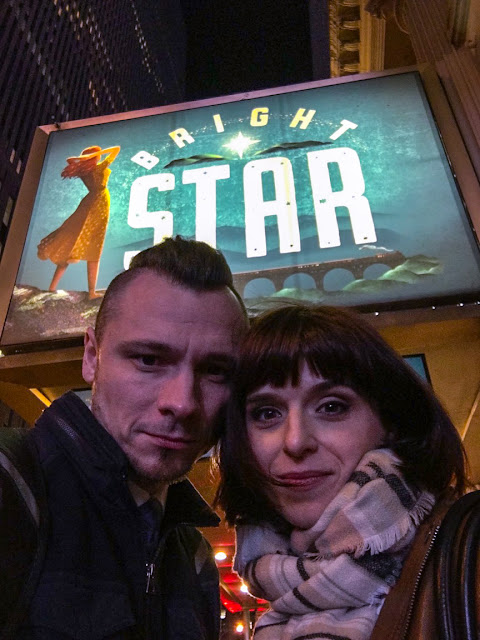 There’s something incredible refreshing about that. Leaving the theater, we both felt like we had a genuinely good time and the show gave us plenty to discuss on the way home. It also gave us an idea as to what we should get our moms for Mother’s Day – tickets to “Bright Star”.  I’m so glad we made the effort to make this date night happen and I sure hope we’ll do it again. Relatively soon.

Bright star is a musical written and composed by Steve Martin and Edie Brickell. Stay up to date on all show happenings on their Facebook, Instagram and Twitter.
Posted by Dellah at 5:58 PM