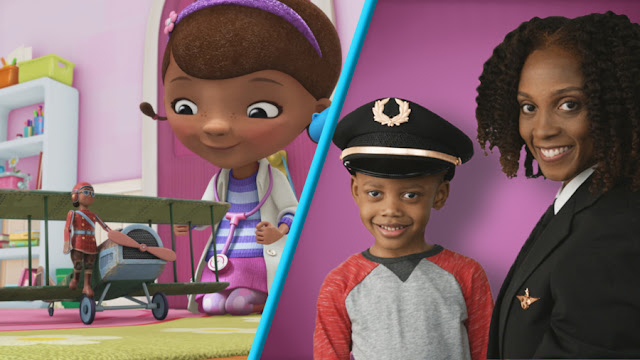 Now more than ever and not just for the month of February, as a parent and educator I feel it's essential to celebrate diversity and to embrace one's culture. Whether it's casual talks about our own families history as an African-American mother, who's married to a Jamaican-American or through shows and social media that inspire conversation, during Black History Month we always seek out positive ways to explore what it means to be African American. With the help of popular programming on the Disney Channel, Disney XD and Disney Junior children can enjoy shows that reflect on history and inspire kids to dream big.

During the month of February you can sit with your little ones to enjoy stories about distinguished men and women including the Tuskegee Airmen Chief Civilian flight instructor Charles Alfred "Chief" Anderson, the history-making commercial airline pilot Stephanie R. Grant, animator and Disney legend Floyd Norman, and physician, role model and activist Dr. Myiesha Taylor, will be presented as part of Disney|ABC Television Group's "Be Inspired" interstitial series during Black History Month on Disney Channel, Disney XD and Disney Junior.

The initiative begins with the story of acclaimed African-American pilot Charles Alfred "Chief" Anderson Sr., known as the "Father of Black Aviation" for his brave and innovative leadership as Chief  Civilian Flight Instructor for the Tuskegee Airmen. The story, hosted by Nathaniel Potvin (Disney XD's "MECH-X4"), originates from the non-profit Tomorrow's Aeronautical Museum in Compton, California, and includes the museum's founder and executive director Robin Petgrave, Ted Lumpkin of the Tuskegee Airmen 100th Fighter Squadron, and Kimberly Anyadike, the youngest African-American female to pilot an airplane across the United States.

For younger viewers (age 2-7), Doc McStuffins, the title character from the acclaimed animated series, introduces notable women and men in a series presented on Disney Junior. They are Stephanie R. Grant, a pilot who led the first all-female African-American flight crew to operate a commercial airliner; Disney legend Floyd Norman, one of the first African-American animators at Walt Disney Studios during the 1950s; and Dr. Myiesha Taylor, an emergency doctor and founder of the Artemis Medical Society, an organization comprised of over 4700 women physicians of color from around the world.

How have you and your family been celebrating Black History Month?
Posted by Dellah at 10:13 AM