Disclosure: We were provided screening passes to facilitate this giveaway, opinions expressed are 100% our own.

Do you know what makes a real hero? It's not the flashy costumes, or the cool gadgets and gizmos, It's definitely having your own awesome movie. It seems to the Teens that all the major superheroes out there are starring in their own films—everyone but the Teen Titans, that is!  But de facto leader Robin is determined to remedy the situation, and be seen as a star instead of a sidekick.  If only they could get the hottest Hollywood film director to notice them.  With a few madcap ideas and a song in their heart, the Teen Titans head to Tinsel Town, determined to make their dreams of movie stardom come true. But when the group is radically misdirected by a seriously Super-Villain and his maniacal plan to take over the Earth, things really go awry. The team finds their friendship and their fighting spirit failing, putting the very fate of the Teen Titans themselves on the line! 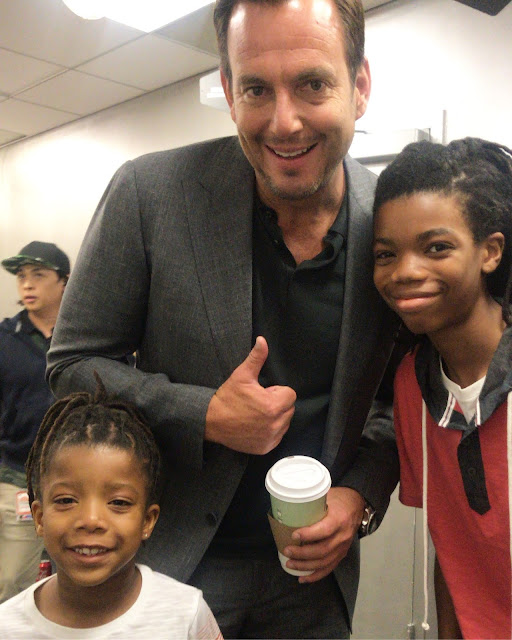 My two monsters, CJ and Tristan were pretty hyped to run into actor Will Arnett in the halls of The Today Show while he was promoting the new animated film and we've been counting down for Teen Titans Go! To the Movies to hit theaters on July 27th.

Please note that seats are first come, first serve and not guaranteed so you should arrive early! L-ET-S G-O! Enter you information in the form below and click BEGIN.

Email ThisBlogThis!Share to TwitterShare to FacebookShare to Pinterest
Labels: Entertainment, Giveaways, Movies and Television, Teen Titans Go! To the Movies