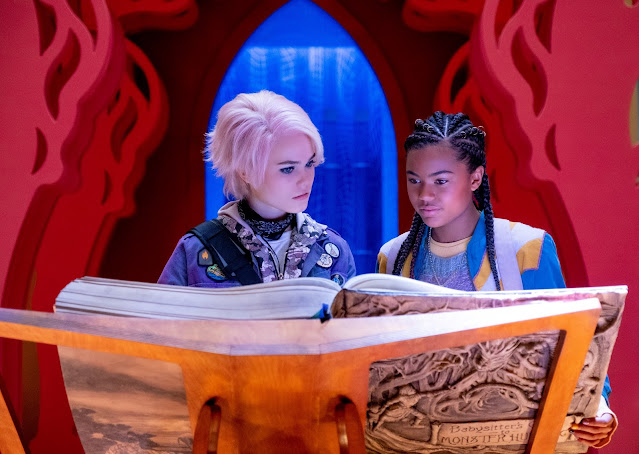 One of the biggest debates this month has been “To trick-or-treat or not trick-or-treat?” this Halloween. While we’re still on the fence on whether we’ll head out for some seasonal fun, we’ve ordered costumes even if it means we’re just dressing up for movie night and a scavenger hunt for goodies at home.

If you’re looking for a low-key spooky movie for the entire family that’s full of creepy fun for young ones who think they’re brave enough to watch the scary stuff, then add ‘The Babysitters Guide to Monster Hunting” to your must-watch list. I guarantee you’ll get a mix of movie vibes from favorites like the classic Adventures in Babysitting, Disney Pixar's Monsters Inc., and our household favorite the Spiderwick Chronicles!

Looking back I’m always in shock at the kinds of horror flicks my parents let me watch as a tween of the ’90s and it’s even crazier that my younger sister (there’s a 5-year difference between us) was able to tune in alongside me. We found ourselves peeking through our thick knit blankets thrown over our heads while we watched everything from the Puppet Master, Freddy Kreuger, Tremors, and everyone’s good guy Chucky.

Fast forward to today and I now have my own soon to be 10-year old who loves to binge-watch Stranger Things but knows he needs to follow it up with a marathon of Boss Baby or Archibold to clear his mind before getting in bed. 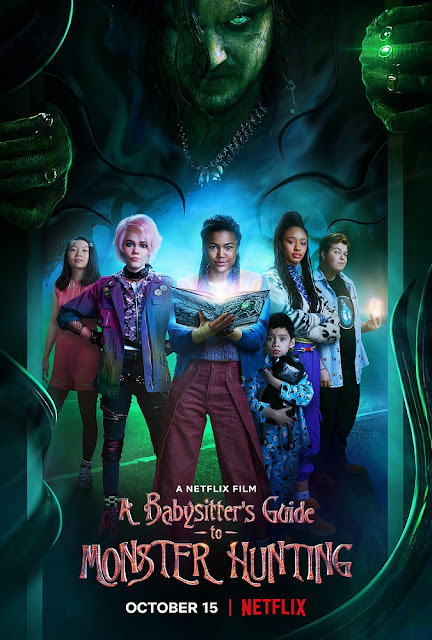 Based on the first installment of Joe Ballarini's popular scary book series of the same name, in 'A Babysitter’s Guide to Monster Hunting' we’re quickly introduced to a grade school-aged Kelly Ferguson (Tamara Smart) frightened in her bed by all things that go bump in the night. Creaking doors and thunderous rain have Kelly looking under her bed before a cloud of mysterious smoke, a gangly fleshy hand, and the sound of a male voice lurks from behind her closet door.

We’re barely 10 minutes into the movie with one eerie scene and the blinking eyes of an adorable white plush bear and my son had already turned to me to say “you and dad should probably make room for me in your bed tonight.”

Hubby and the teen jokingly roll their eyes and laugh at me with their ‘we told you so glare’ knowing they both warned me not to play the Rachel Talalay directed  (A Nightmare on Elm Street) movie before it got dark out.

But I am determined to have one scary movie watching buddy, he’ll be ok, lol. Aside from surely being a new family-comedy hit for Gen Z kids, the movie slides in some meaningful lessons on friendship, confidence, and facing your fears. 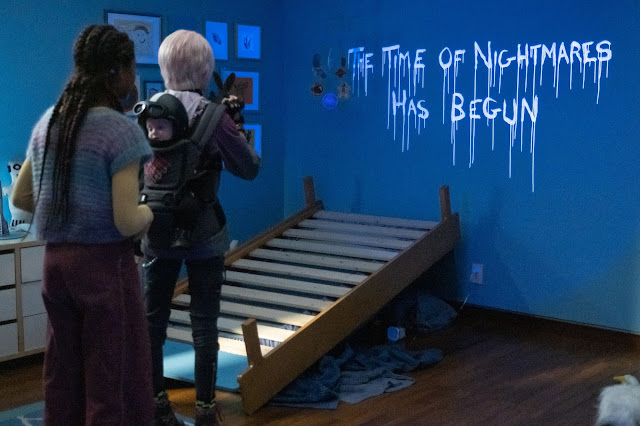 The awesome part about Halloween is that it’s the one time of year where you can be absolutely anything you want to be. When you’re a super-genius math wiz, bullied and known in town as 'monster girl' by all of your high school peers for telling everyone you were attacked by creatures, of course going to the biggest costume party of the year is the best way to reinvent yourself. That is until you find out you have to babysit your mom’s boss “the ice queen’s” kid on the same night.

When Kelly gets to the Zellman home, she clearly has no clue what kind of crazy evening she’s in for after agreeing to watch over Jacob Zellman (Ian Ho) an anxious, insomniac who tries to smuggle mouthfuls of chocolate just to stay awake.  Kelly tries to convince Jacob into believing that it’s safe for him to fall asleep and that there are bigger things to be scared of like climate change, talking to boys, and inequality. Ha! 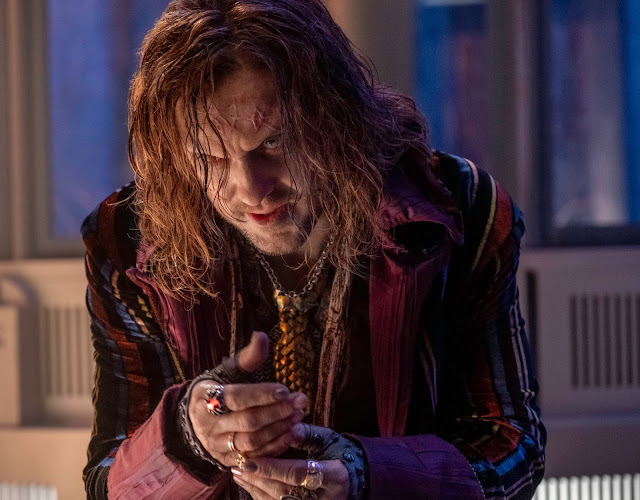 While Kelly gets a call from a friend and a glimpse into the party she’s missing, the same Beetlejuice wannabe from her dreams as a kid is hiding out in Jacobs's closet. Unrecognizably played by Tom Felton { Malfoy from Harry Potter), we meet the Grand Guignol or The Boogeyman who’s plan is to harness Jacob’s gift of dreams.

To do his dirty work, he uses these strangely cute, blue, yellow, and green monsters called ‘Toadies’ who’ve got snaggly teeth, weird hair, and lopsided eyes to snatch up Jacob into an underground portal beneath his bedroom floor. Honestly, these characters weren’t scary at all, our tween laughed at them and seemed to relax his shoulders once they were on the screen. Where these characters are a colorful reprieve to break up all the doom and gloom, the overdone CGI animation seems misplaced and throws it off a bit.

Freaked out about the possibility of getting grounded over her now lost charge, Kelly calls 911 but of course, with it being Halloween night, they think it’s a prank. Out of nowhere, after receiving a nightmare ping on her phone, rolls in Liz Lerue (Oona Laurence) on a motorbike with a baby strapped to her back in a carrier. Personally, I loved her feisty personality as Vice President of an international secret society of babysitters who protect kids from monsters. 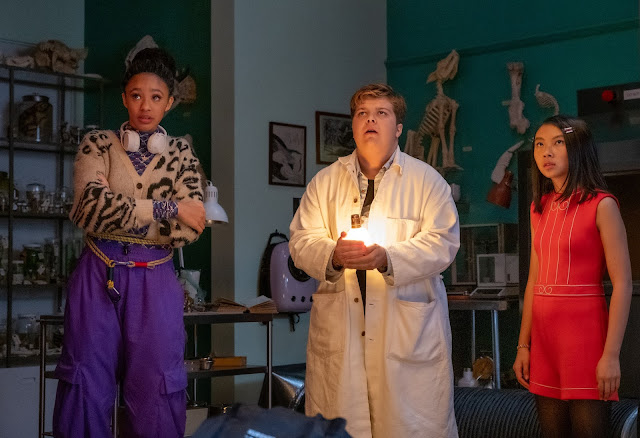 With the help of tech genius Berna Vincent (Troy Leigh-Anne Johnson), creature expert Cassie Zhen (Lynn Masako Cheng), and potions master Curtis Critter (Ty Consiglio) both Kelly and Liz set off to find Jacob with plans to defeat The Grand Guignol. Lerue whips out the babysitter's guide book, which holds thousands of years of monster hunting wisdom, and has Kelly realize she isn’t crazy after all.

Kelly and Liz make quite the heroic pair, they’re awkwardly funny, pretty dang smart, and have both had moments of feeling helpless and out of control. While Kelly encourages Liz even when things seem hopeless, Liz helps Kelly boost her confidence and reminds her that those cool kids at the party are actually insecure. It's so important for kids to understand that being different is not only okay but pretty awesome too!

In one scene when they’re at the Halloween party searching for the kidnapping Toadie, Kelly starts stressing out over her crush Victor seeing her and doesn’t stand up for herself against another girl who bullies her. Liz turns to her and asks “ how can you be more scared of a mean girl and some guy, over a monster?” and reminds her to play it cool and not to be that girl who swoons over the eye-catching guy and loses herself. 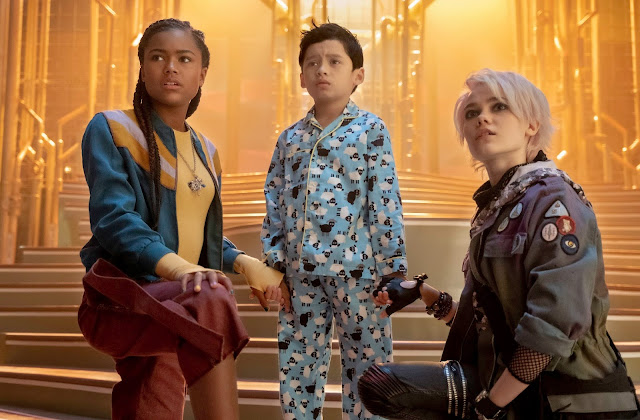 Poor Jacob ends up being whisked away to the Boogey Man’s Nightmare Nursery with evil lullabies to encourage him to surrender to sleep. He may be little, but Jacob’s pretty witty and tries to trick the Grand Guignol into giving him hyper cola energy drink and chocolate-covered espresso beans to prevent him from dozing off so that he can’t conjure up and bring an army of infinite nightmares to life.

After plotting to steal a much needed, mysterious amulet from a Hollywood glam monster named Peggy Drood (Indya Moore) and her mafia of black cats, Kelly ends up using her true power of mathematical genius, and an Angel Fire potion to battle it out with the Grand Guignol.

Our teen who teetered between scrolling his phone and watching finally jumps in to say he was disappointed in the ending. Considering how cool and menacing the bad guy seemed, the way they beat him was pretty lame.

Overall with a PG rating, it was a good watch for movie night that wasn't over the top scary, had a few good laughs, and without any more spoilers let's just say they definitely left room for a sequel. 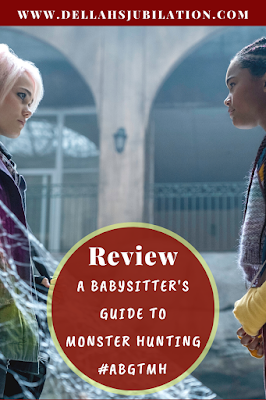 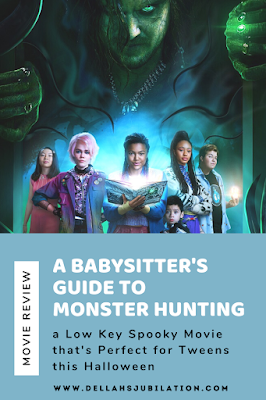 Have you read the book series? Did you watch the Netflix movie yet? Let us know what you thought!