This Thanksgiving not only am I looking forward to watching the Macy's Thanksgiving Day Parade and stuffing my face, I'm hoping that after we eat (we usually start with a turkey day lunch and pick our favorites while watching the dog show) we can go out to catch the new Muppet movie. I grew up on the Muppets and love everyone from insightful and lovable Kermit, the diva-liscious Miss Piggy to the misunderstood Gonzo. We can't wait to see them in this years film where they join together to save their old studio. Who was your favorite Muppet?

You might remember Jason Segel from some of my fave movies to watch with my hubby for great laughs "Forgetting Sarah Marshall", "Knocked Up" and " I love you man". To his credit we can now add co-writer (partnering with Nick Stoller) of this latest Muppet movie. I can't imagine the pressure behind writing for such classic characters. In an interview with Timeout New York magazine  he discusses how he felt writing for the film & what character he most relates to among other things.You should definitely get the family together to check out the new flick. It's been reported that there will be tons of star studded cameos by everyone from Whoopi Goldberg, Selena Gomez (my 6 year old CJ's girlfriend), Wanda Sykes to  Zach Galifianakis (my hubby's fave), Ben Stiller, Billy Crystal, George Clooney and many more.

Just recently I was sent an email from Disney.com  to check out the previews and the music video for the remade Muppet Show theme song featured on the "Green Album". We absolutely love the new version done by the band OK GO. Do you remember they're the guys who did the video of them singing and performing "Here It Goes Again" while on treadmills? My boys and I instantly grew addicted to the remake and love the video. Look out for the best scene in the video of the Muppets pretending to be the puppet masters of the band mates.  My 10 month old was bobbin his head and trying to clap to the beat, while his wanna be B-Boy older brother danced around the house. I just showed the video to the hubby and he's like "Isn't it phenomenal that the Muppets will never die, kinda like Mickey mouse. Why isn't there a Muppet Land  yet?" The "Green Album" also features other revamped classics such as "It's not easy being green", "Moving right along" and "Rainbow connection" by other contemporary artists. 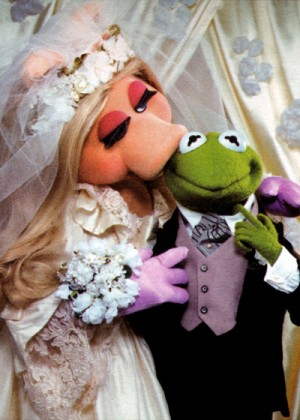 My sis Nicole and I loved watching Muppets Take Manhattan over and over again. Our favorite scenes were of the rats singing in the kitchen of the diner, while serving lunch. Piggy going off on the sexist construction workers and Gregory Hines helping Miss piggy in the park after having her purse stolen. No scene was quite as memorable as Kermie and Piggy FINALLY getting married and all of the Muppets including Big Bird were at the Chapel singing "Somebody getting married". During Nicole's maid of honor speech at my wedding she made reference to that song as she got all choked up and I got all teary, which was really special because we are rarely ever cheeseballs with each other.

I think the Muppets and Sesame Street Characters will be apart of our culture for years and years to come, outliving us all. Sesame street never gets old, I find myself watching it sometimes when the kids have already left the room and I don't even care that I'm watching alone.These characters bring back great memories of my childhood and for that i will always be grateful for the genius of Jim Henson. If you live in New York or are visiting between now and January 16, 2012 you should check out the Exhibit "Jim Hensons Fantastic World" at the Museum of Moving Image  which displays some of the iconic puppets, storyboards, drawings and you can even view some of the movies while there.


*images from: muppet.wikia & muppet.wikia ( Kermit and Piggy wedding added by ScareCroe)
Posted by Dellah at 9:34 PM

Email ThisBlogThis!Share to TwitterShare to FacebookShare to Pinterest
Labels: Books and Magazines, Entertainment, Movies and Television, Revel in New York, Things to Do