Keep Your Face Towards the Sunshine 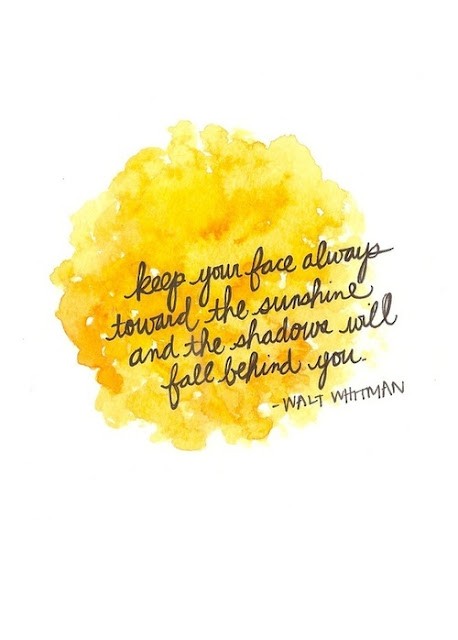 I haven't painted since my days in High school but I think I'm going to have to take a trip over to Michael's Craft store and recreate this for myself as a daily reminder and hang it in my tiny work space. What started off as a great weekend visiting {during the recent blizzard Nemo} with my parents and hanging out with my sissy, brother and my boys, ended up in an intense disagreement between my father and I over my career choices and an extra dose of self-reflecting for me.

Everyone has a story to tell, has had hurdles to jump and bridges to cross, some hills steeper than others, some dark days longer than most but we managed {maybe with a few bruises} to get through them, didn't we? Over the years the Hubby and I have experienced a few moments that have literally knocked us on our butts and had us shedding tears, arguing, praying for a ray of light and picking up the pieces {more than once}and starting all over. Many of the situations were out of our control {loosing a baby, two major surgeries, dealing with a chronic illness, job-loss} and many were our own mistakes {lack of communication, mismanaging money} but somehow we've managed to keep pushing forward with the support of each other and awesome friends and family.

As I recently just celebrated my thirtieth birthday for a second time I feel like I've managed to complete many of the things listed on "Life's Journey" checklist, maybe out of order but completed nonetheless. I got engaged, pregnant {celebrated the engagement and ended up with a surprise} and graduated with my bachelors all in a 4 month span. I became a stay at home mom, signed up for graduate school for Elementary Education while working full-time and the Hubby worked, and I mean worked hard, at sometimes more than one job at a time. He's put his dream of culinary school on the back burner and I can't wait for him to bring it all to fruition. When we got pregnant with our second child {with the baby, doctors said I shouldn't have had because I was risking my own health} I was still working at a private preschool in midtown Manhattan and dealing with Crohns Flare-ups simultaneously.

Despite the hiring teacher freeze in NYC and my contract not being renewed at the preschool I taught at and enjoyed for 4 years{yepp the recession sucked!}, my passion for teaching never wavered.  My dad's concern is that my heart isn't in teaching anymore because I've pushed off completing my degree, which is so far from the truth. With only one class left I WILL FINISH, I'VE COME TO FAR! He's worried about us earning enough to collect a decent social security and other benefits, and .......... I was furious because I felt like even with everything I had accomplished it still wasn't enough and I know that my dad is just trying to forewarn us and protect me, but he's placed quite a few band-aides on bruises already and has convinced me to believe, so in turn so does he.

I worry about stability just like anyone else, I've just needed to take a few detours to get there and yes along the way other things have peaked my interest, like wedding coordinating while working alongside a childhood friend {and a team of three other fabulous creatives} who decided to start her company My Bridal Budget. I've been passionately working on this blog but haven't been able to give it 100% like I want to and  know it deserves. There have been times I thought I should just quit it, but then something pops in my head that I just need to share with all of you.

Joseph Campbell said "We must be willing to let go of the life we planned, so as to have the life that is waiting for us".  Despite it all I still see a fabulously bright future for our young family and as we sift through stormy weather and face the sun I look forward to living in the moment and enjoying the little wonderful things that come our way.