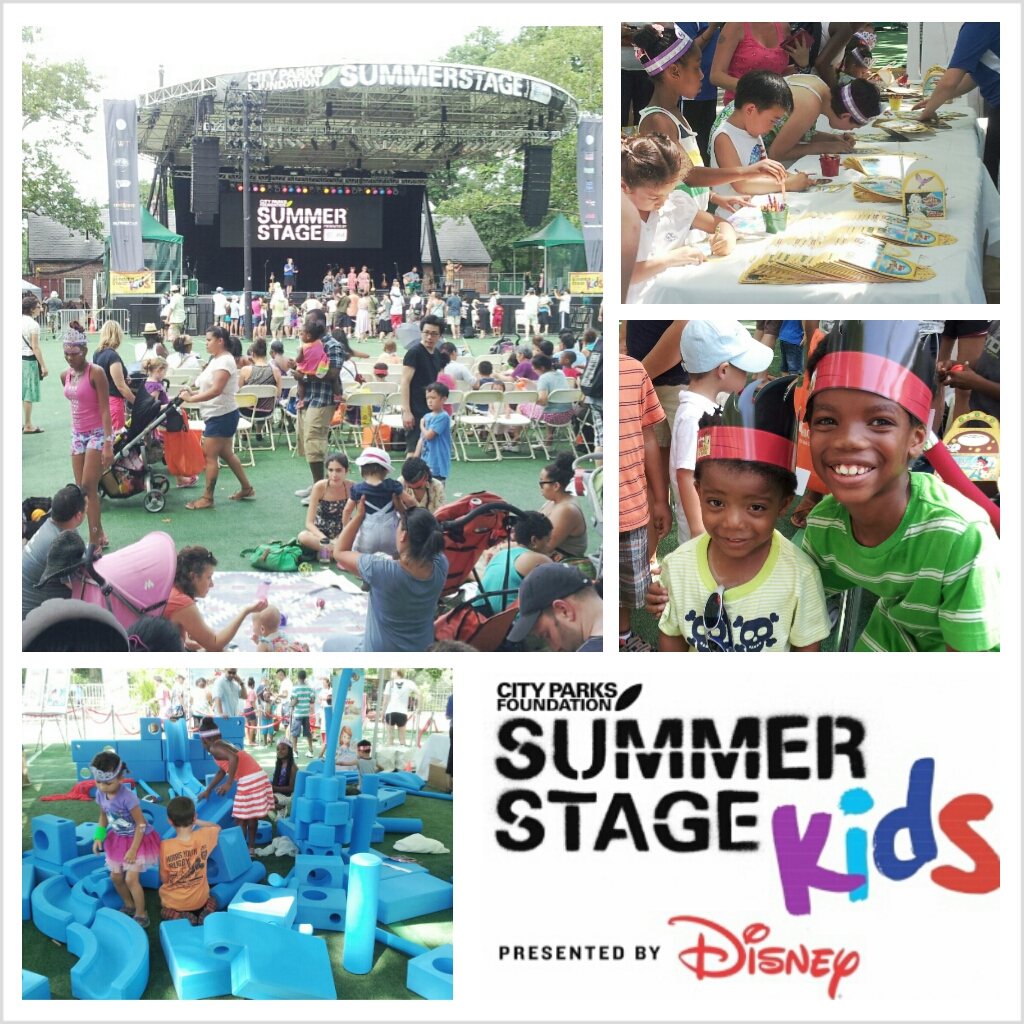 We are always looking for an adventure, so last month the boys and I headed to Central Park for Summer Stage Kids Global Family Day for an afternoon filled with performances, activity stations and tons of fun and excitement for kids of all ages. This was our first time at this annual event and we were pleasantly surprised with all there was to see and do and the awesome Free goodies that families got to take home. 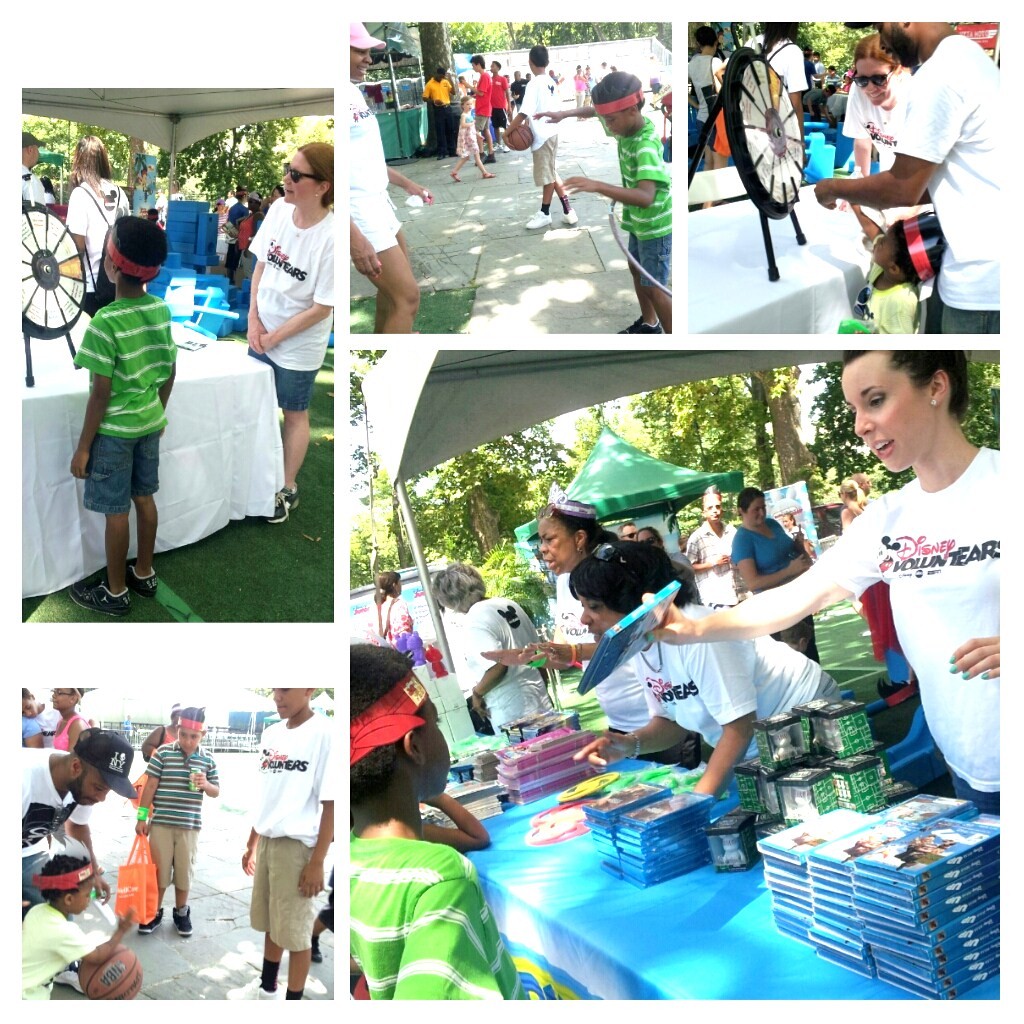 When we first arrived we were greeted by Disney's VoluntEARs and the boys each took a turn at spinning the wheel to land on a healthy and fun physical activity to try out. Guests found themselves hopping on one foot, dribbling a basketball and hula-hooping. After the completion of the activity each guest was invited to choose from 4 Disney Blu-ray DVDs that included Pixar's Up, The Prince of Persia, G-Force and the Johnny Depp version of Alice in Wonderland. Other giveaways included puzzles, wrist bands, frisbees and Vinylmation Mickey Mouse collectible figurines. 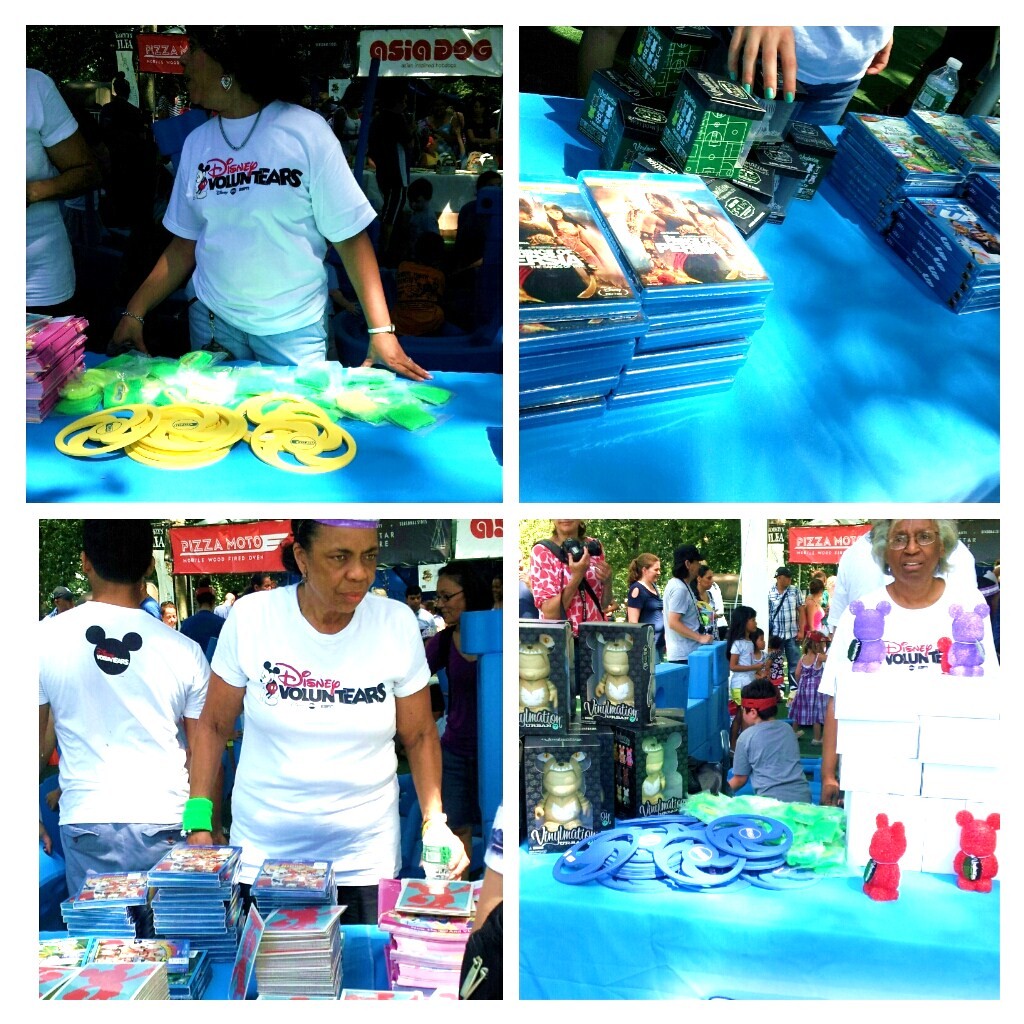 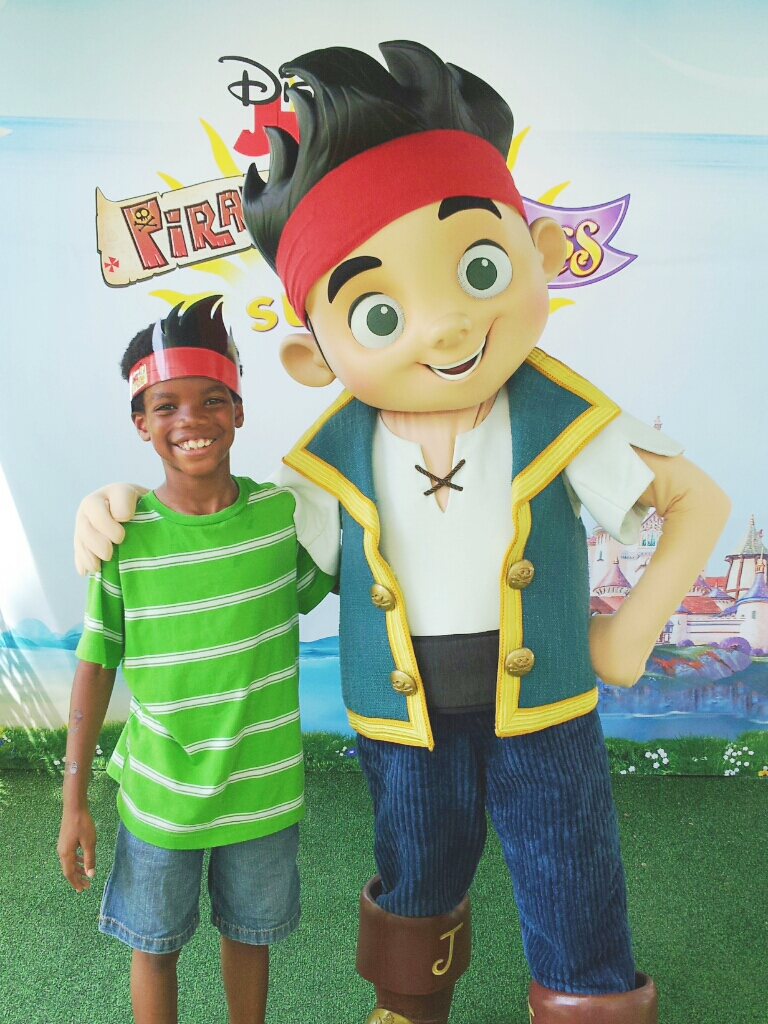 My 34 month old Tristan totally chickened out of taking a picture with Jake from the Disney Junior show Jake and the Neverland Pirates and instead insisted that his big brother CJ do it. This only has me concerned  and is probably a good indicator of how the lil' monster will react when he sees all these ginormous characters next summer during our family trip to Disney World. 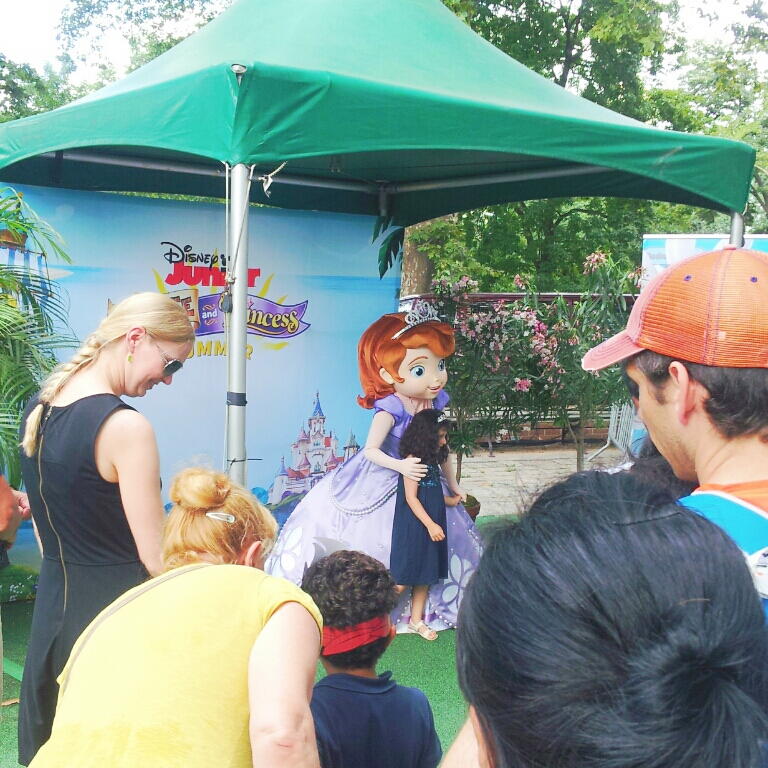 Princess lovers were thrilled to pose with the adorable Disney Junior character Sophia the First. 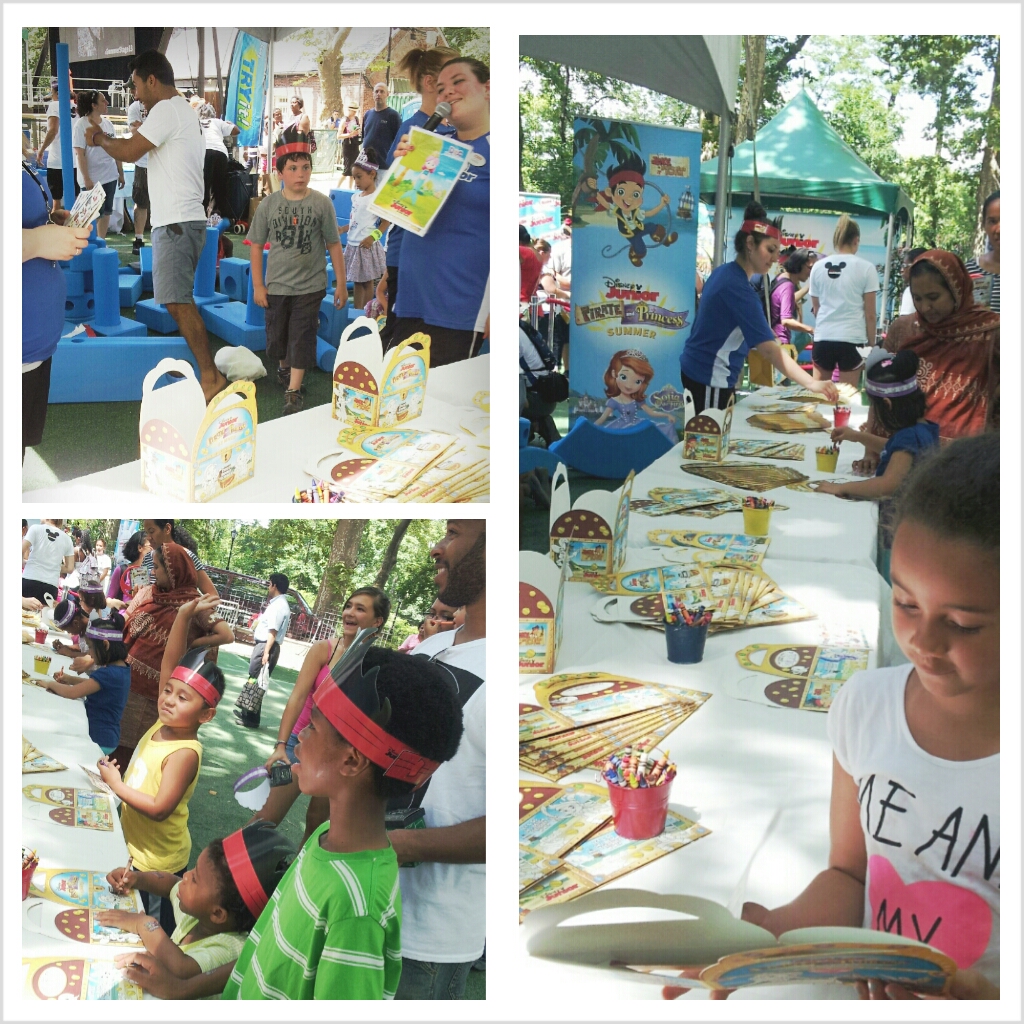 Kids got to take part in some Disney Junior television trivia and scored tattoo's and stickers while coloring treasure boxes that they got to fill up with other treats. 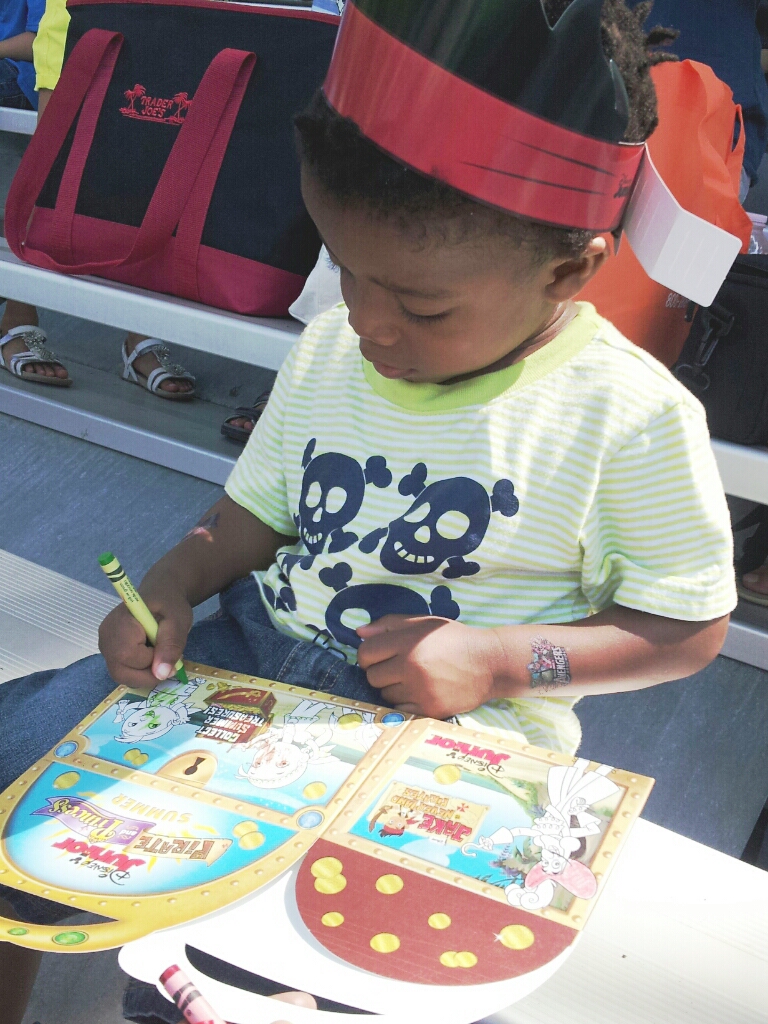 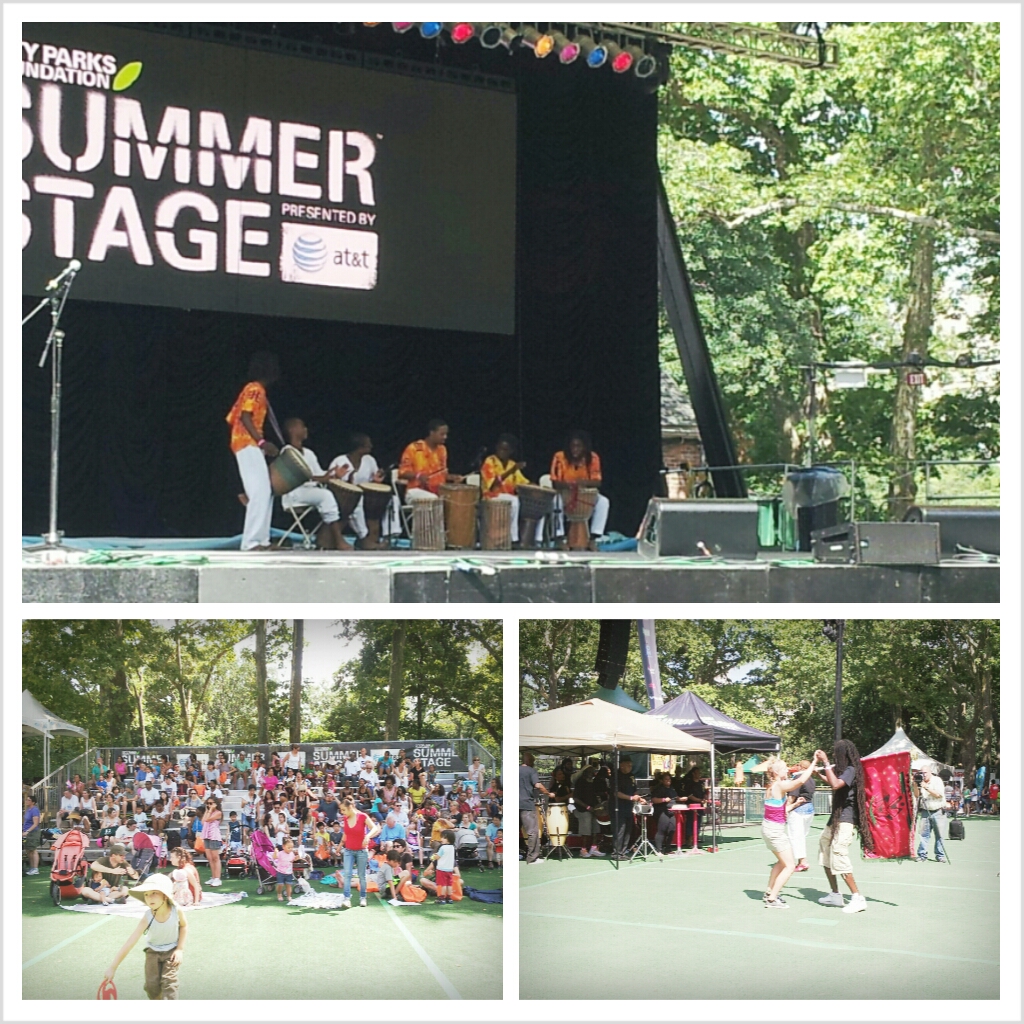 Most guests filled up the bleachers first that were shaded by trees, while others spread out blankets or grabbed a chair with family and friends to enjoy the line-up of Summer Stage performers. The show kicked off with the Natural Rhythm Expression Band that had the crowd tapping their feet and dancing to the sounds of the Caribbean with Steelband and Calypso music. 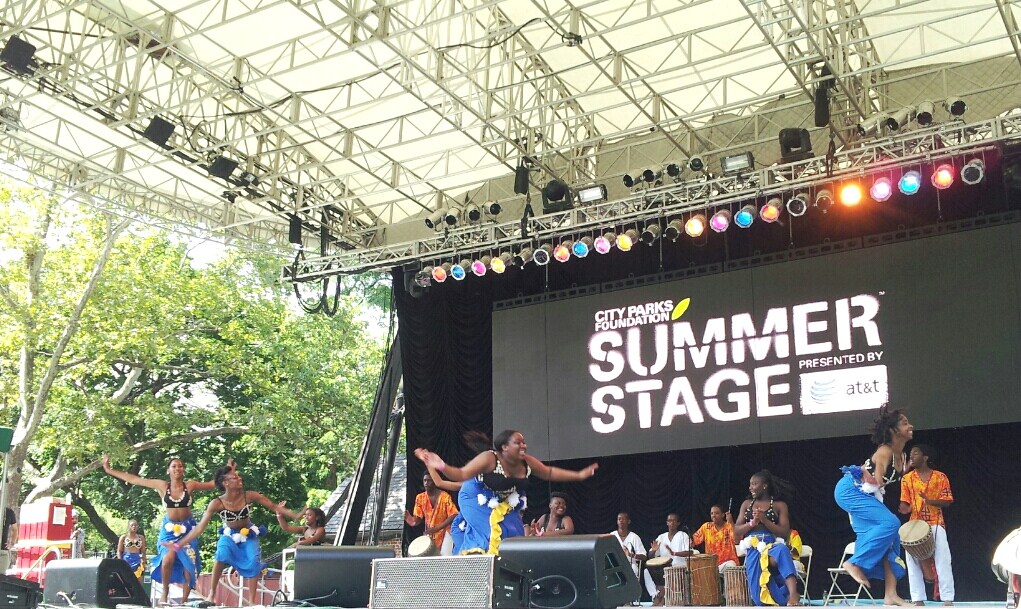 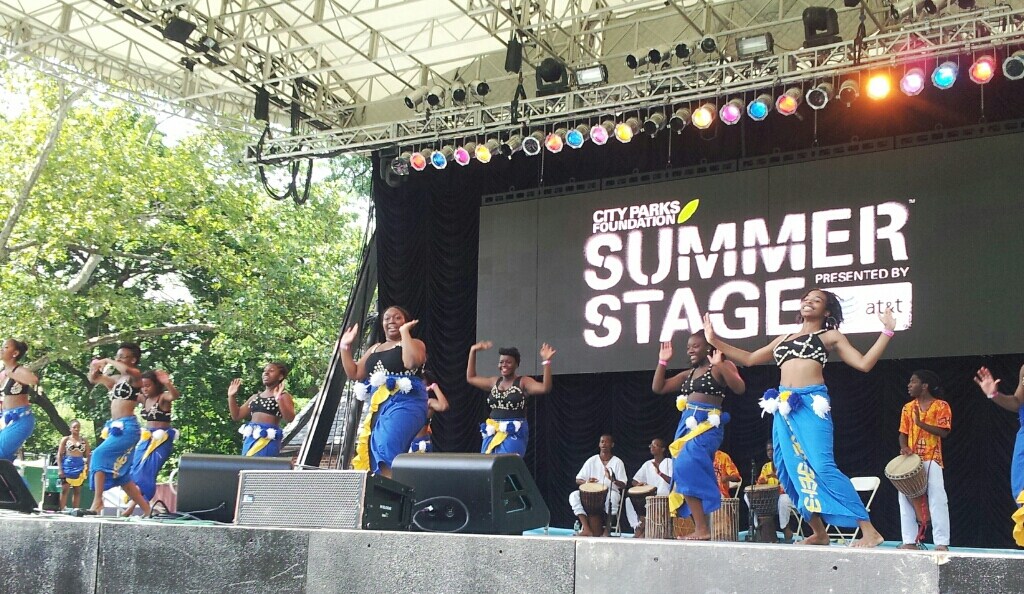 The dancers from IFETAYO youth ensemble were all smiles as they graced the stage and gave an artistic, beautiful, high energy performance. 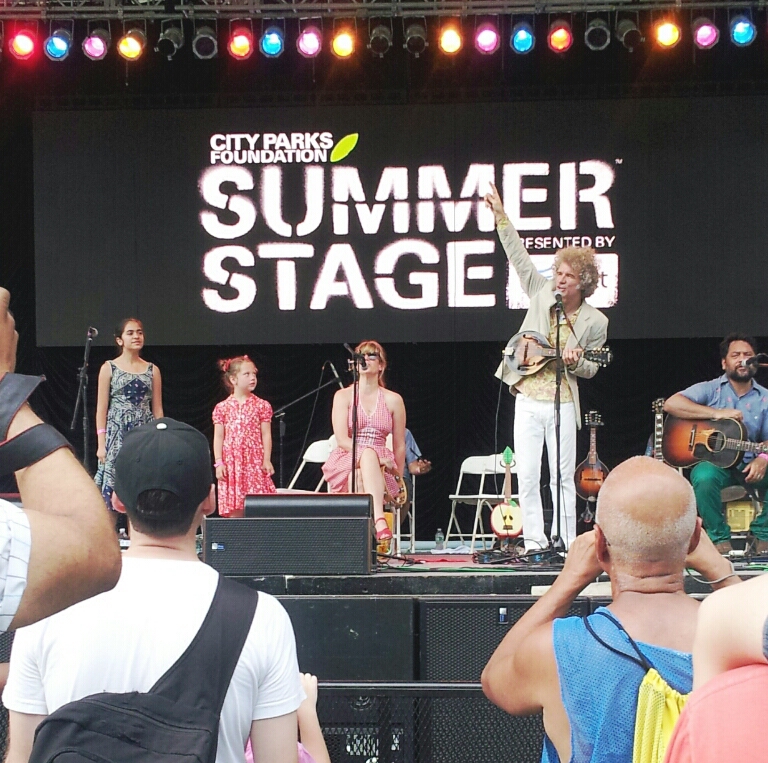 Two of our favorite Children's singers, Grammy nominated singer Elizabeth Mitchell and Dan Zanes joined together to sing a few tunes to get the audience moving and singing along. 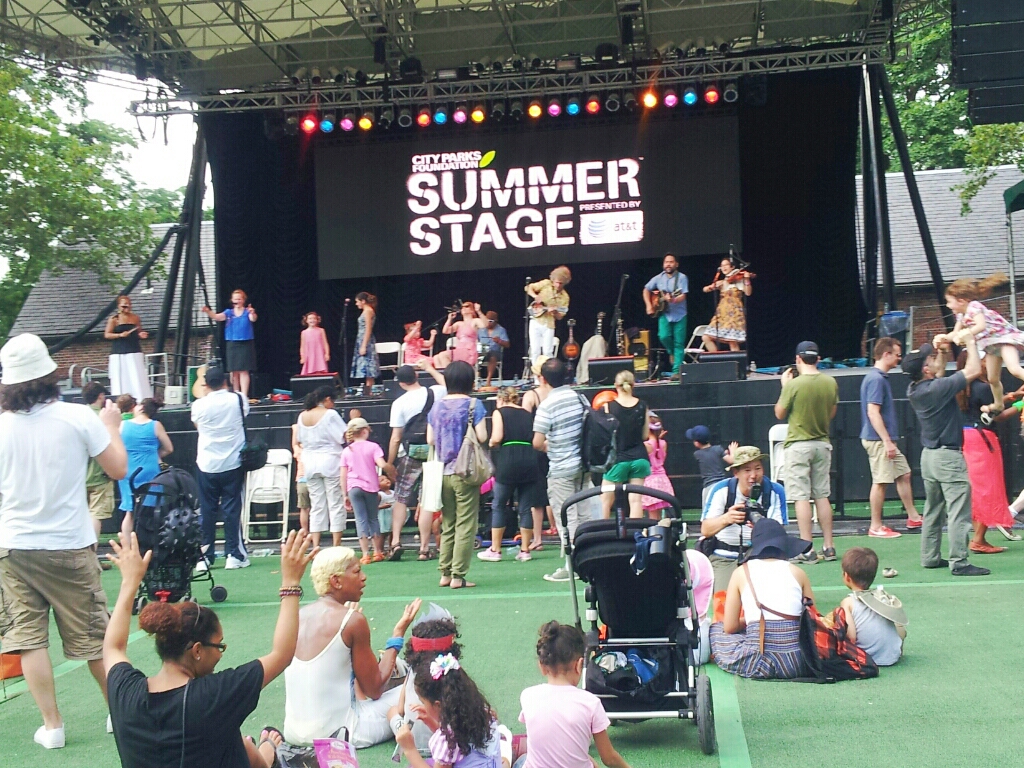 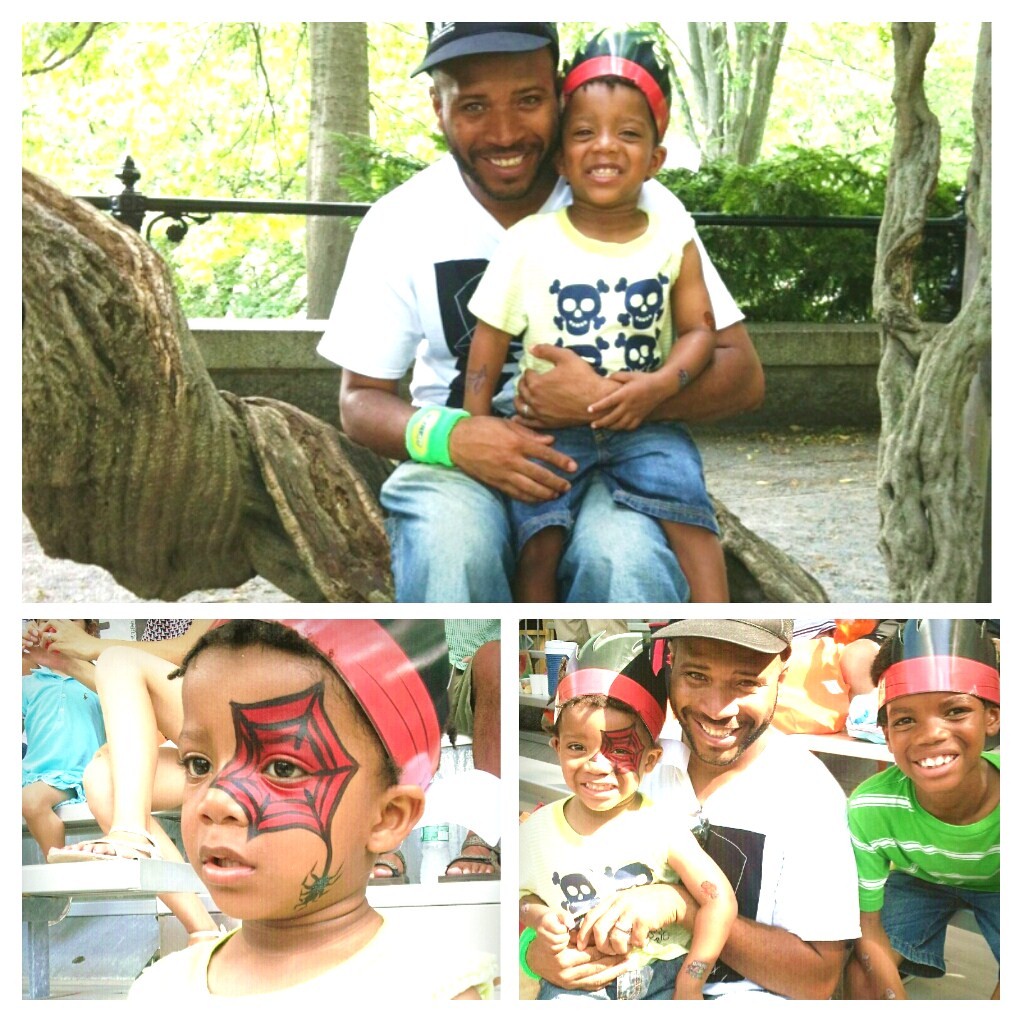 In between performances Tristan got his face painted for free in honor of his currently favorite Marvel character Spiderman and CJ tried getting creative while building towers with the imagination foam blocks. 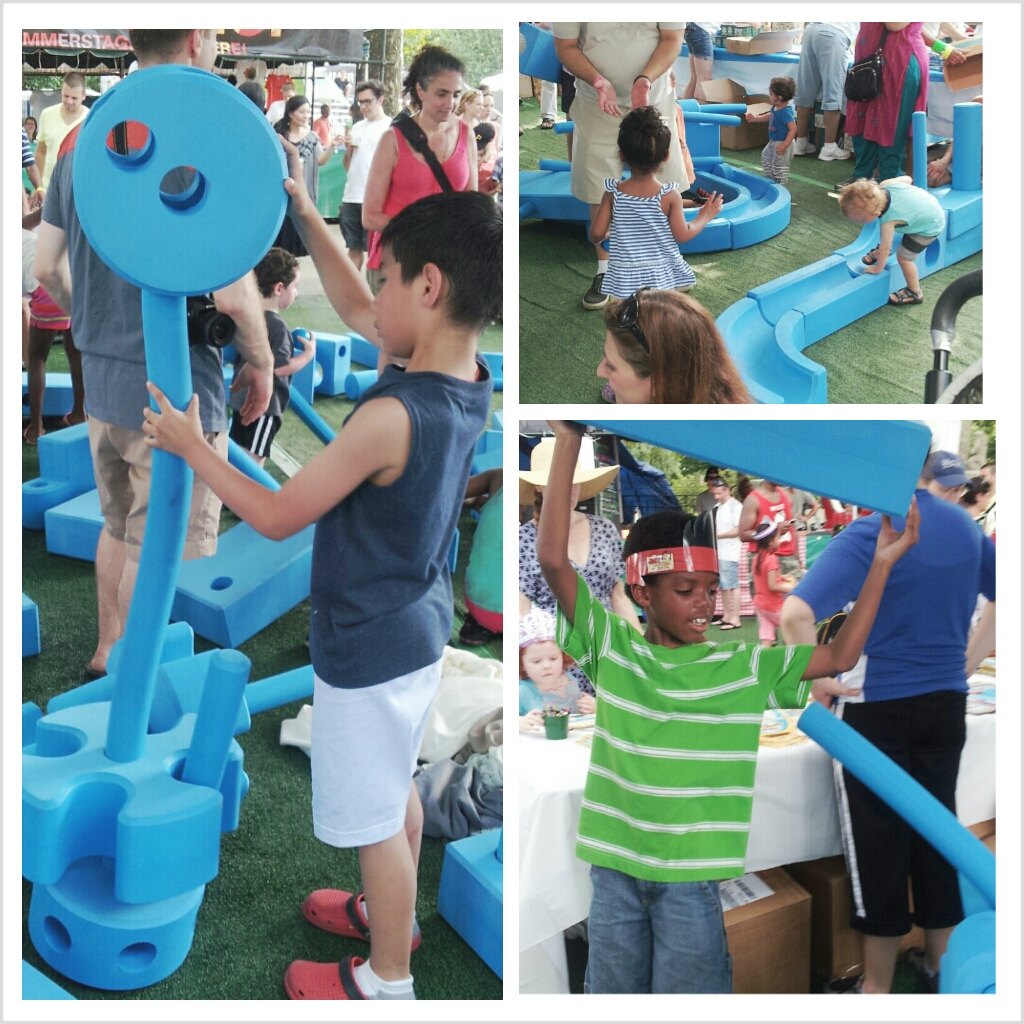 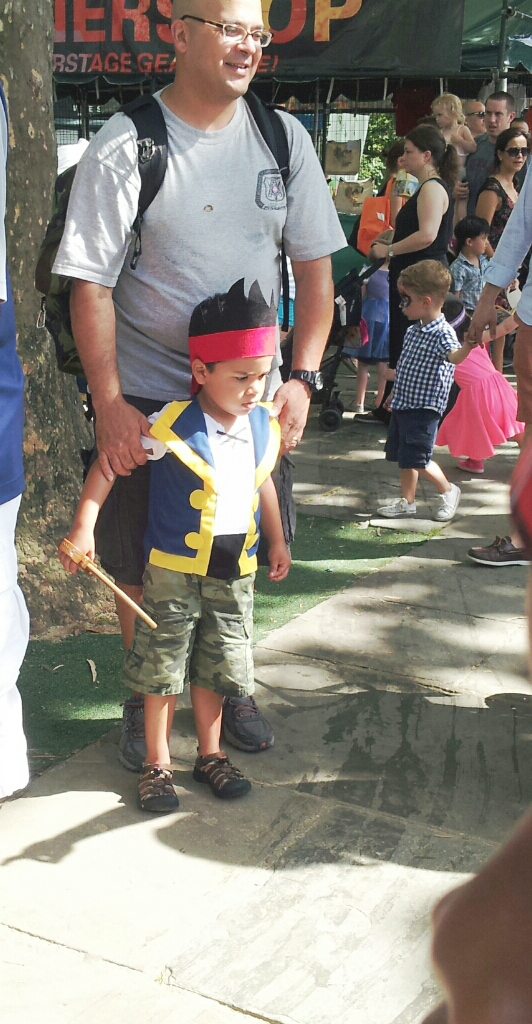 Little pirates and princesses that came to party were in for a  special musical treat. Once the Jake and the Neverland Pirates band hit the stage, all the kids and their parents were singing "Yo ho Let's Go!" 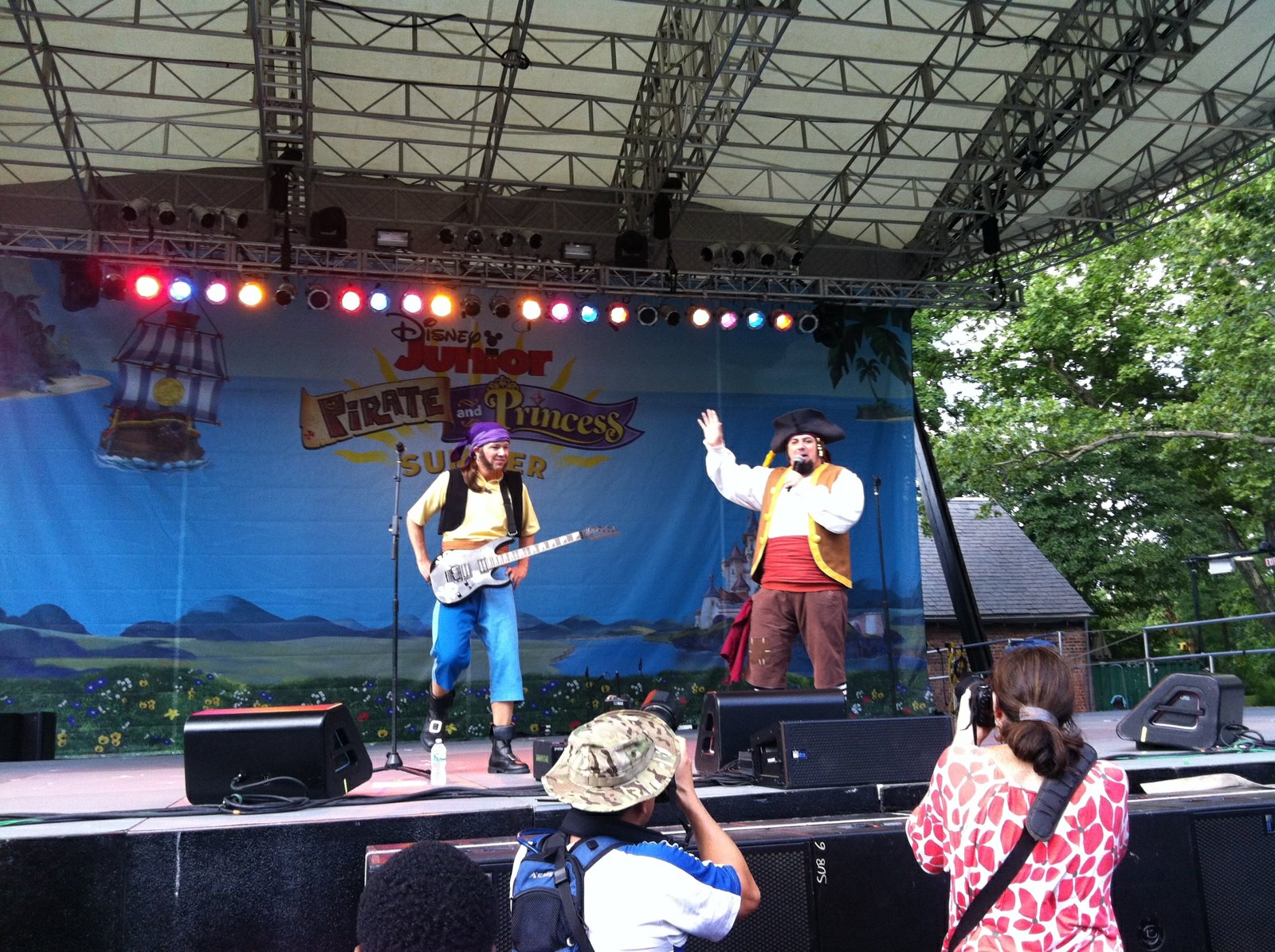 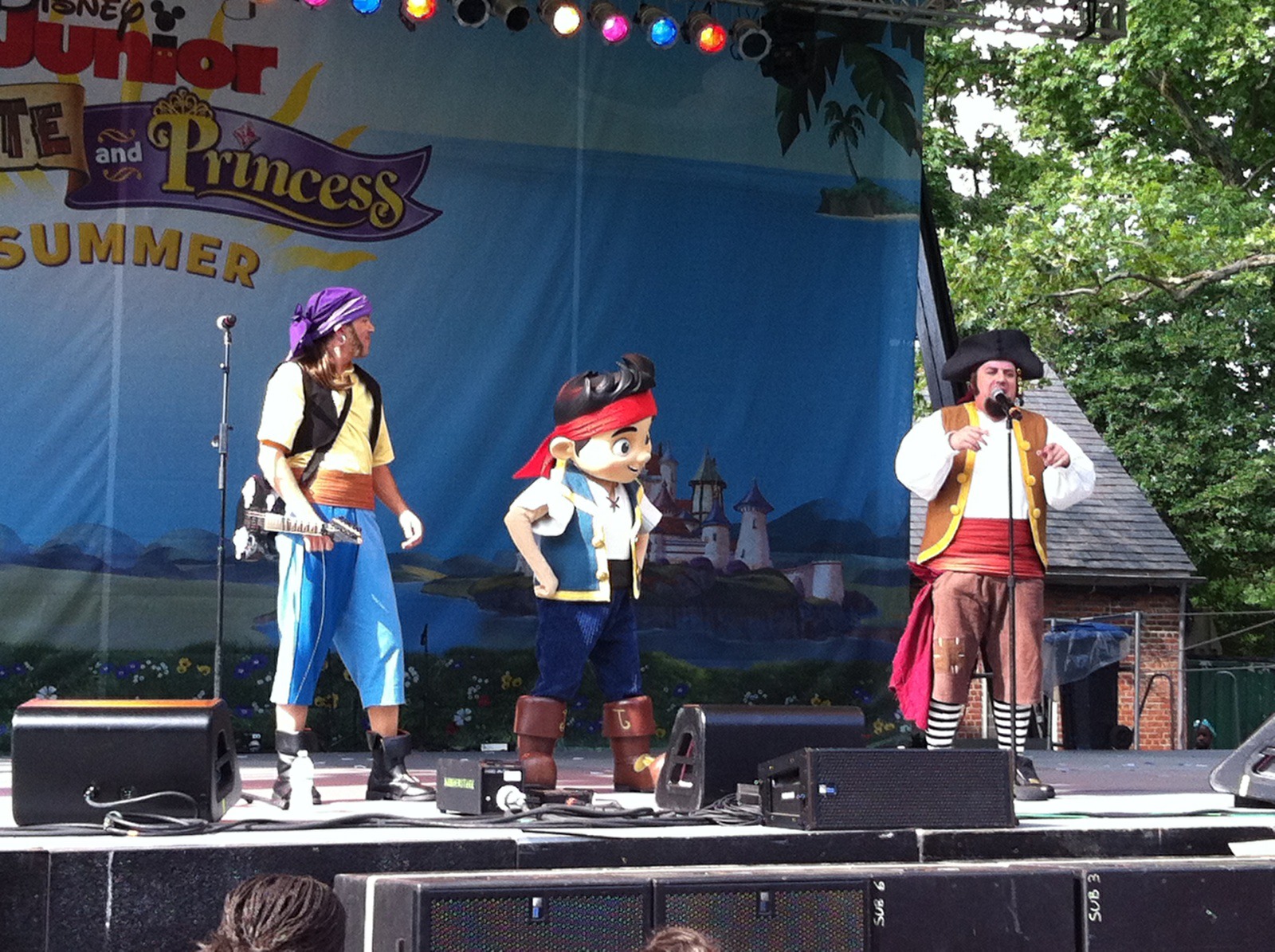 Nemcatacoa Teatro amazed the crowd with it's acrobatic stilt walking performance that left my boys in awe, despite being a little creeped out by their makeup and mysterious music. 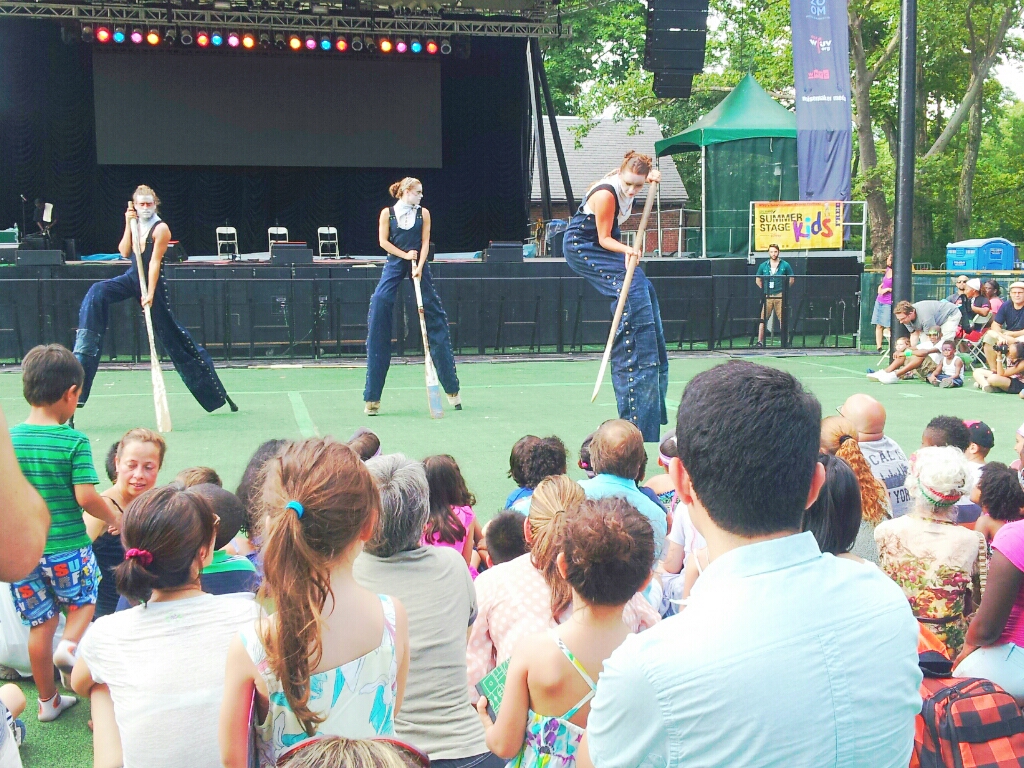 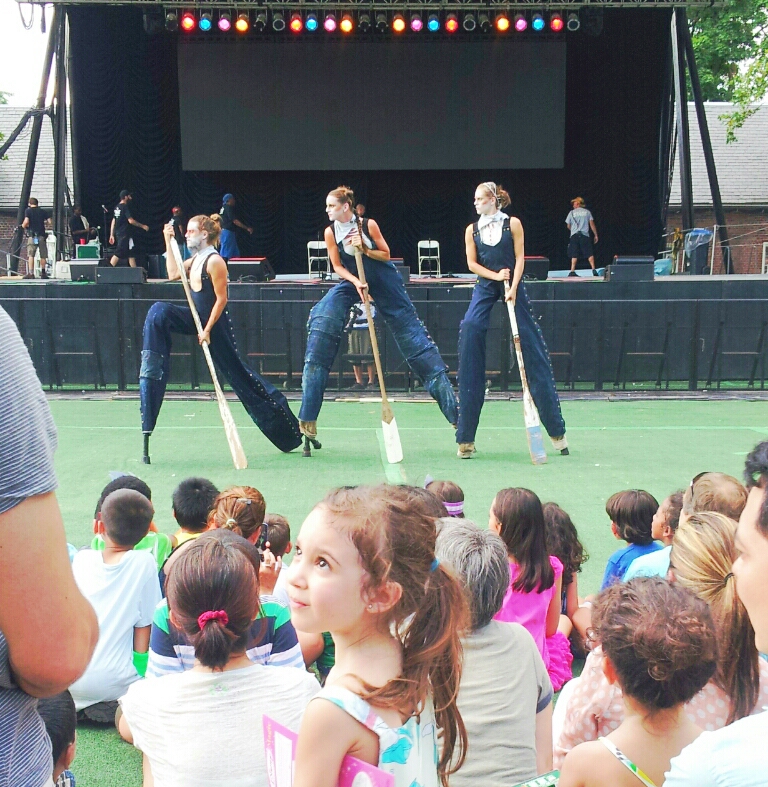 I couldn't have asked for a better way to spend a stay-cation with my family and the perfect ending was heading home, making popcorn and watching G-Force as the boys played with the rest of their goodies before calling it a night. 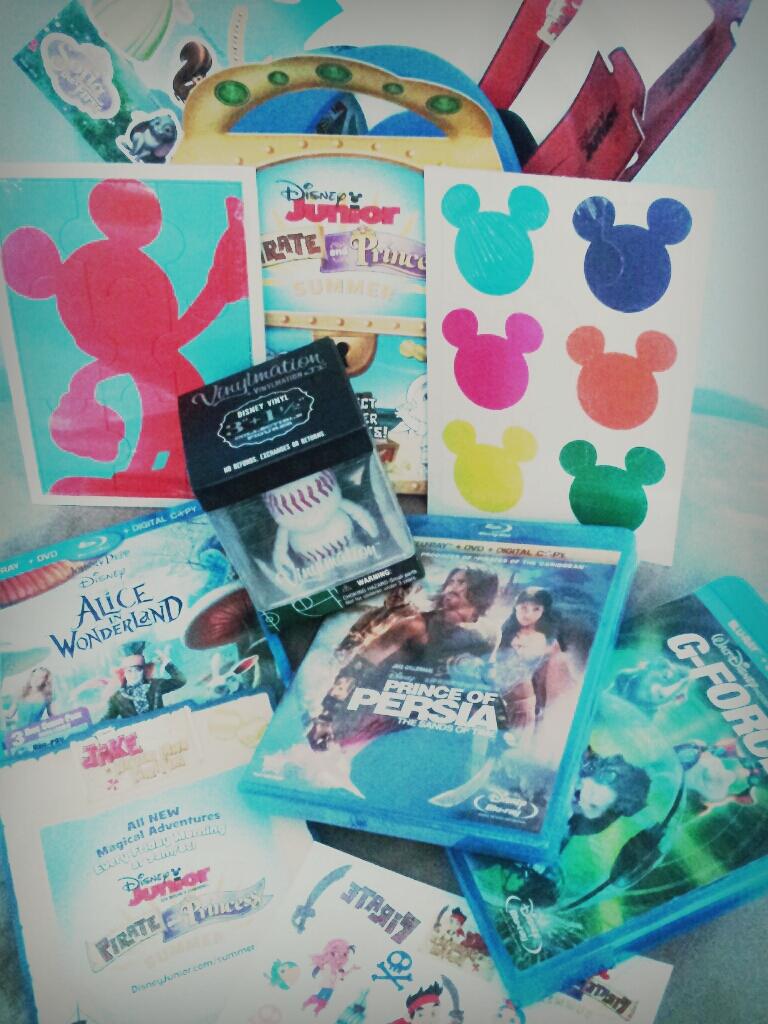 We will surely be marking our calendars to attend this Disney sponsored event with our monsters for years to come. It's really a great way to enjoy some entertaining, culture filled performances with the family for FREE right here in NYC. Summer Stage Kids Global Family Day is an event surely not to be missed out on and your kids will smile for hours.


*Note this post is solely my opinion and written to give you a glimpse into what the event was like. I received no form of compensation for writing this. All images belong to Dellahs Jubilation except for the Summer Stage Kids Logo.