* Disclosure: We were given tickets to attend the event, and products to host a giveaway. I was not compensated for this post and the opinions written are 100% my own. 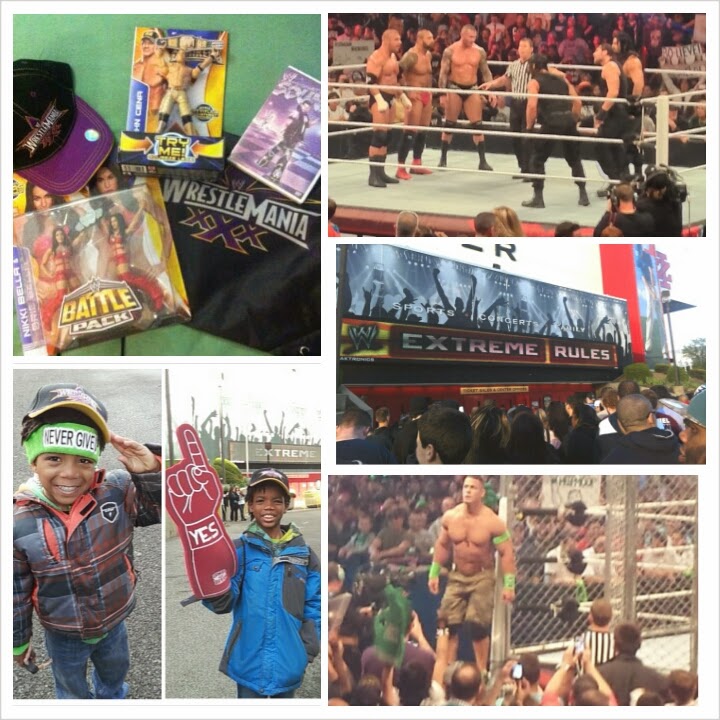 I can't even begin to tell you how much fun it was to head to East Rutherford, New Jersery's Izod Center with my two monsters, hubby and a friend to attend the WWE's Extreme Rules Pay-Per-View Event. Both my hubby and I grew up watching the WWF superstars as kids and now love watching it as a way to unwind with  2 boys. We all get excited when the infamous theme songs of John Cena, Triple H and Daniel Bryan play in the house while watching RAW and Smackdown on television or when catching up on the WWE Network.  As ultimate fans, to be there live, in a crowd of  thousands who were cheering for their favorites was an unbelievable experience. The last time I had attended an event was back in the 90's when my dad took my sister, my best friend and I to Madison Square Garden. I remember watching Yokuzuna fight the UnderTaker and being decked out in a Brett the Hitman Heart cap and shiny pink reflecting glasses, flailing my matching teddy bear around in the air, and honestly I'll never forget it.

From beginning to end, the Extreme Rules experience was non stop fun and high energy. We headed to the Times Square Port Authority and rode the Coach USA bus which was a quick, smooth ride to the Izod Center. As we filled the bus and took our seats, all of a sudden we were all cheering "Yes!, Yes!, Yes!" and getting hyped to see Daniel Bryan. Minutes later others began yelling out "John Cena Sucks!", which honestly I didn't care for because I can't stand the former Cena fans who have now jumped on the bandwagon {including my 9 year old, CJ} to root for that creepy Bray Wyatt and couldn't wait for their steel cage match-up. We got to the Izod Center about an hour early and there where tons of people already in the parking lots, tailgating and buying souvenirs, while others waited in line chanting in anticipation.

We were originally concerned about the event taking place on a Sunday night since CJ would still have school the next morning, but how on earth could we let the boys miss out on such an amazing first time opportunity? School night or not, we were not alone! Families were out there in groups, with some kids even dressed up in costumes to resemble their favorite WWE Superstars like: Kane, Bray Wyatt and Dolf Ziggler. Another major concern we had , was whether or not the event would be to graphic for the kids altogether and quite honestly, as avid watchers, it was really a pretty mild show in comparison to past years. As the WWE tries to shift gears and become increasingly more family/ kid friendly, the hubby and I agreed that the most slightly concerning part was at the end of the show during the match with Daniel Bryan vs. ane, which I discuss later in the post. 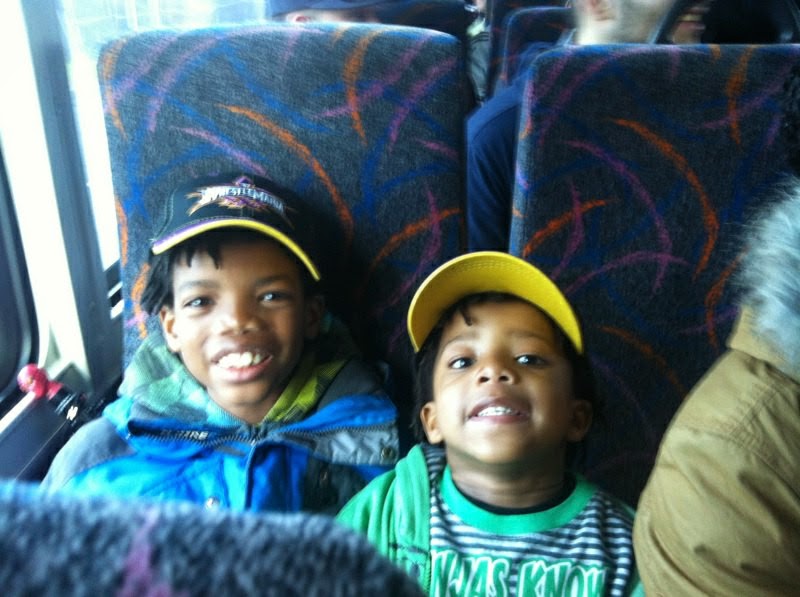 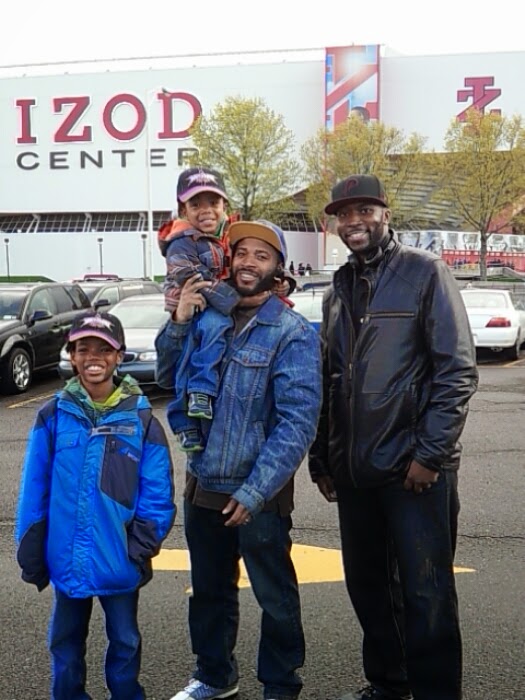 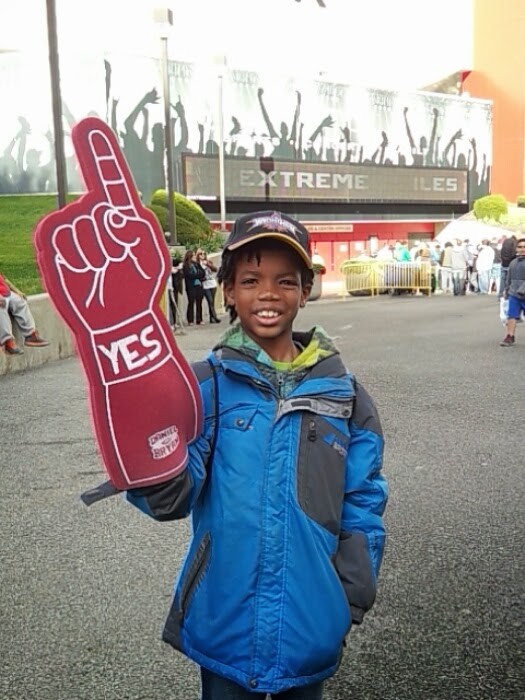 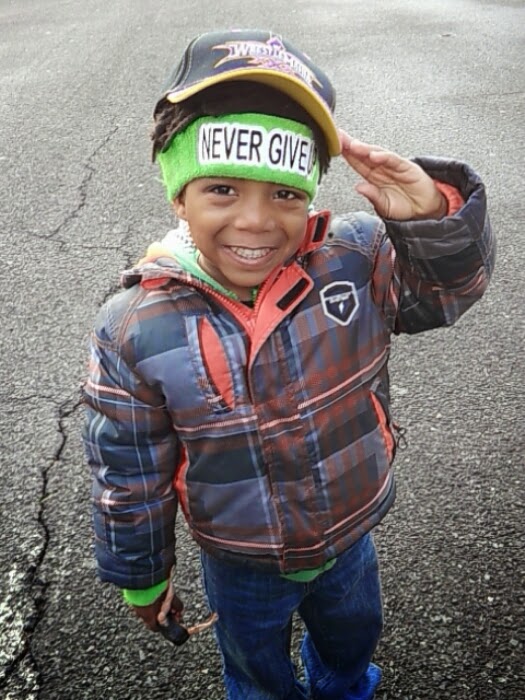 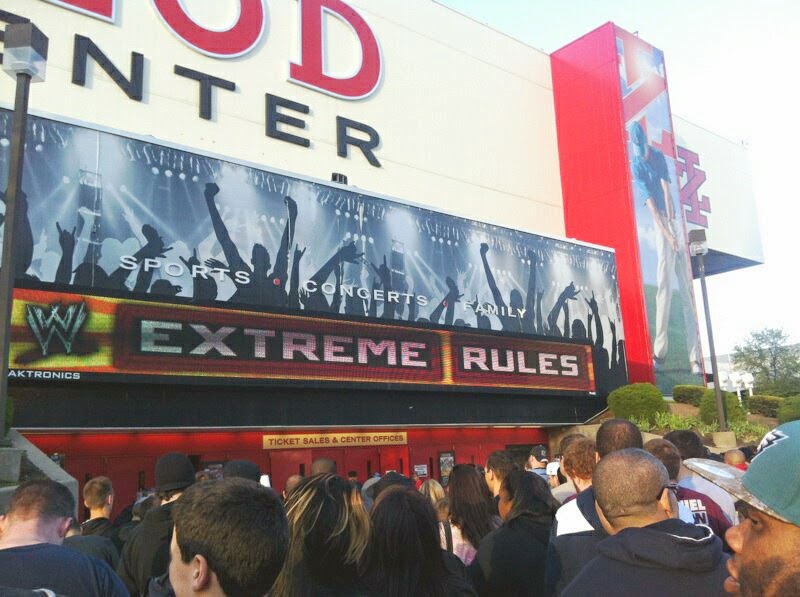 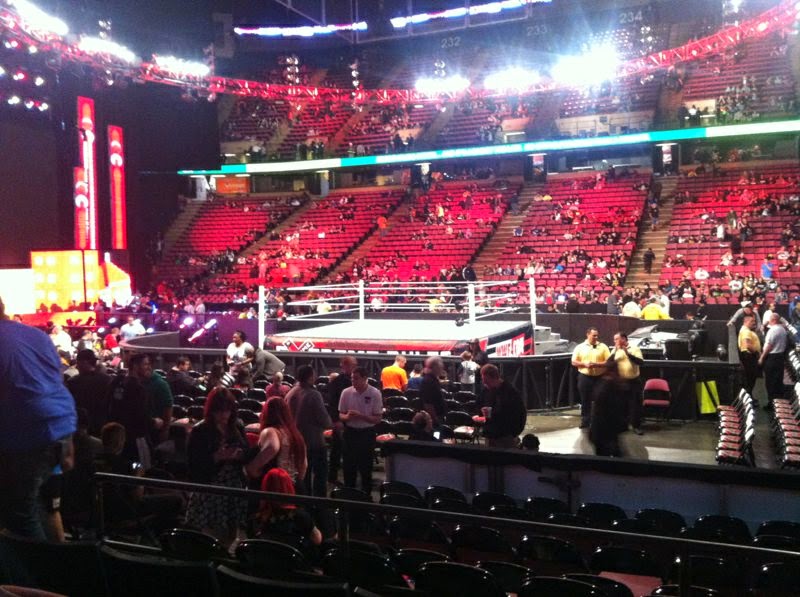 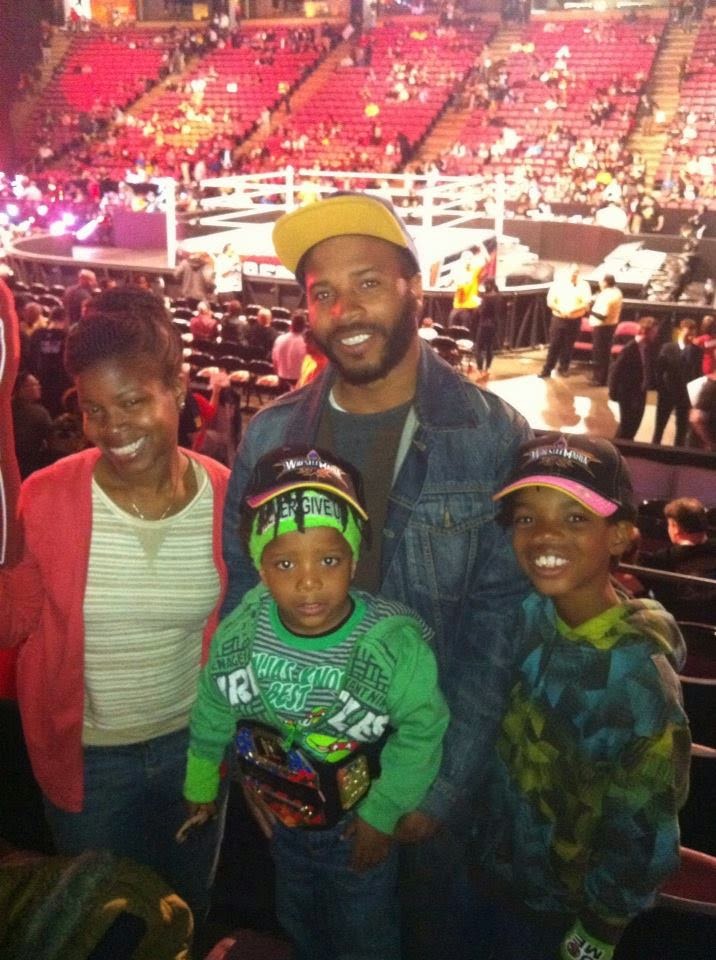 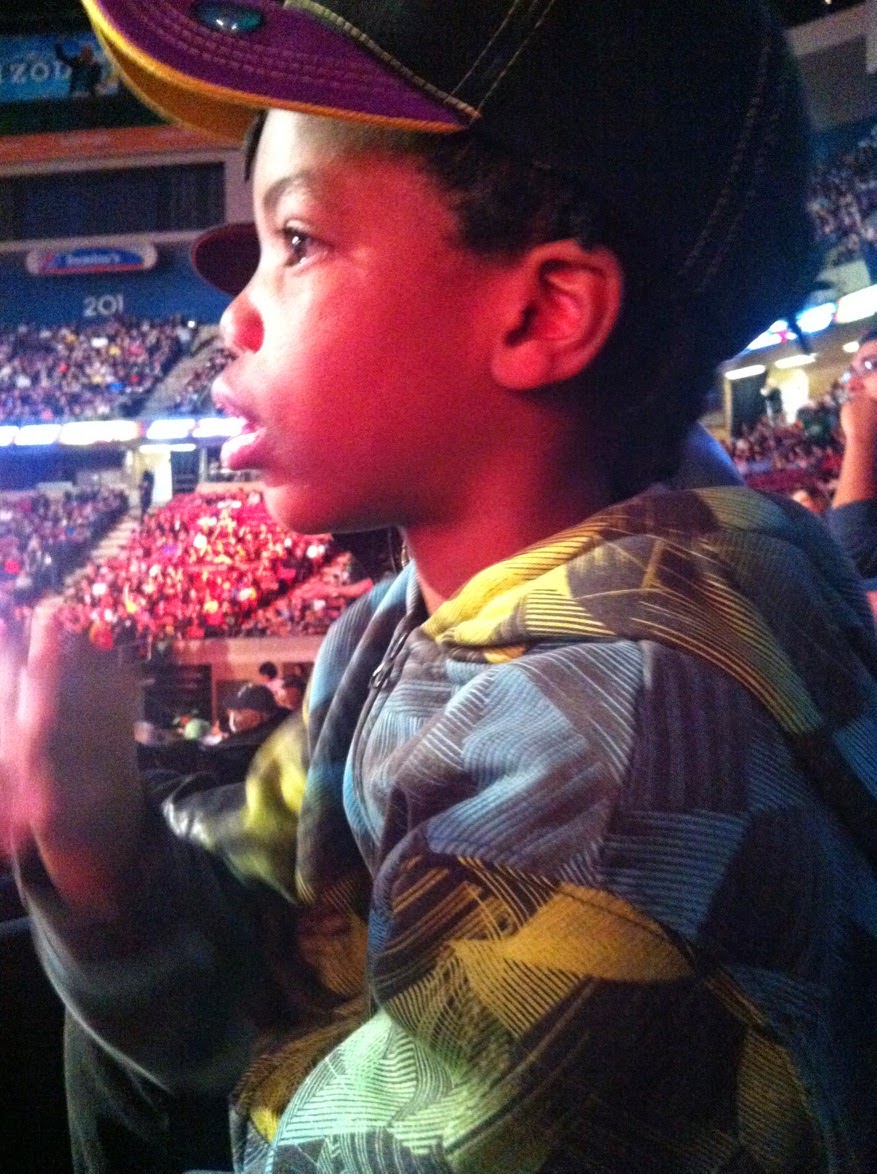 We could not have asked for better seats to witness such an epic night of battles between these iconic WWE superstars. CJ was so excited, he even started to tear up, and Tristan Riley just couldn't stop bouncing out of his seat anytime his favorite WWE wrestlers theme song played. I wish I could have captured the excitement in the twenty-something year old guys sitting behind us who admitted that this was their first live show. One of them even apologized in advance for his screaming, but could you blame him? You easily get so caught up in the excitement and action, you can't help yourself. 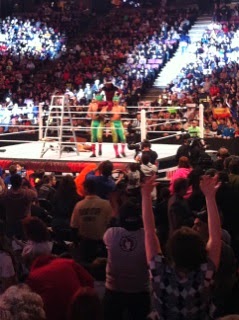 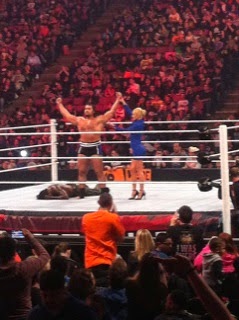 One highly anticipated battle by far, was the legendary Six man Tag Team match up between Evolution {The Cerebral Assassin: Triple H, The Animal: Batista and The Viper: Randy Orton} vs. The Shield {Roman Reigns, Dean Ambrose & Seth Rollins}.In my house we BELIEVE IN THE SHIELD! 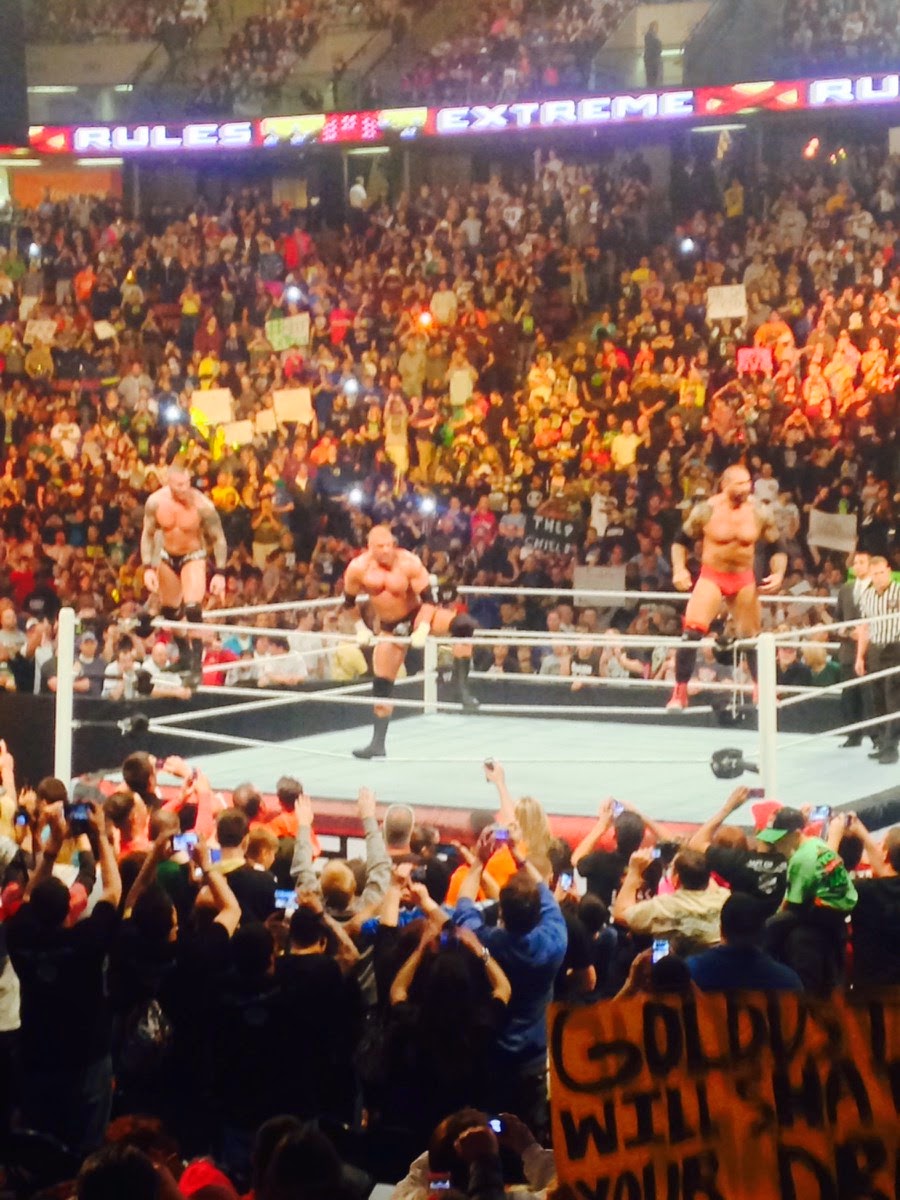 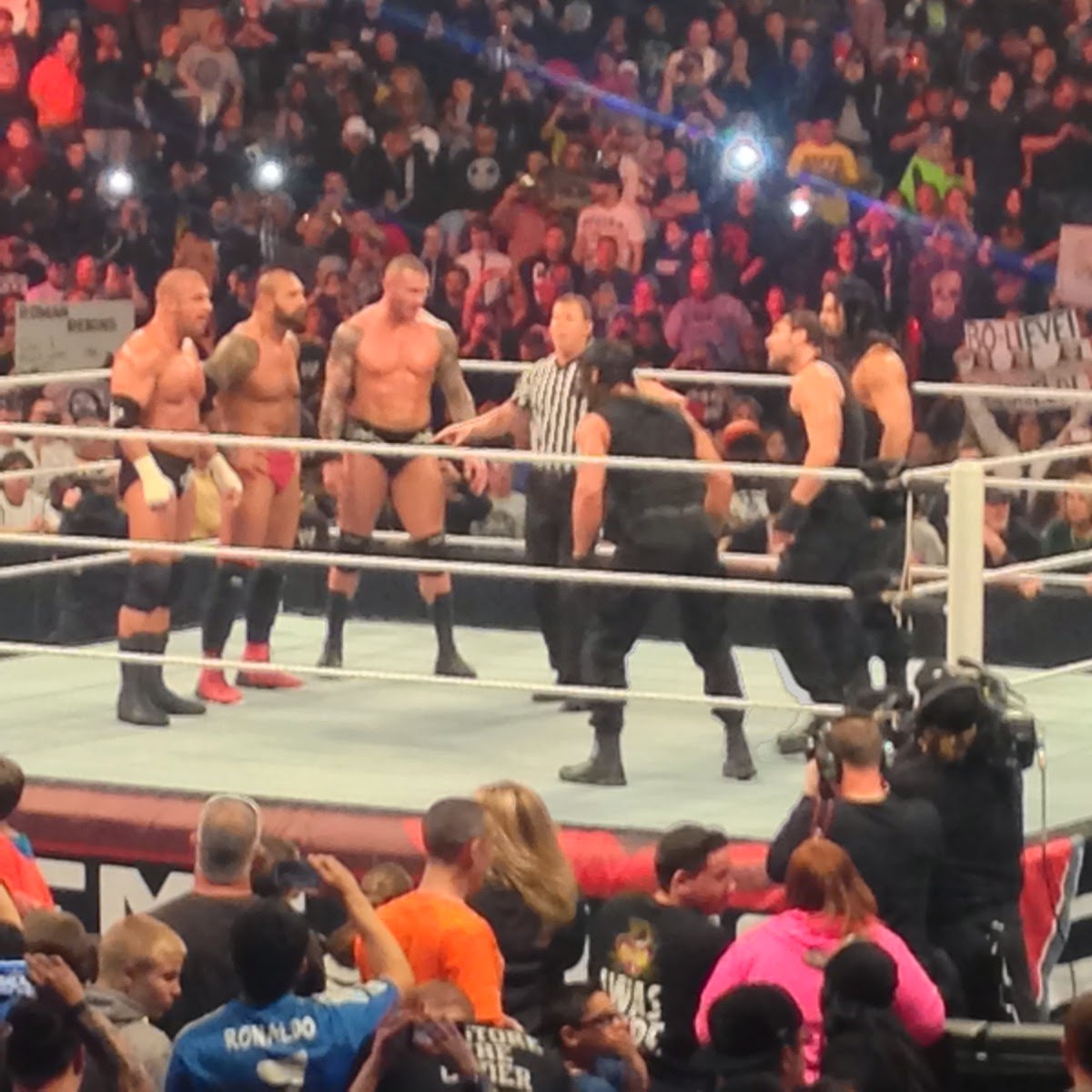 During the steel cage match between John Cena and Bray Wyatt we found out whether The Wyatt family really did have the whole world in their hands. 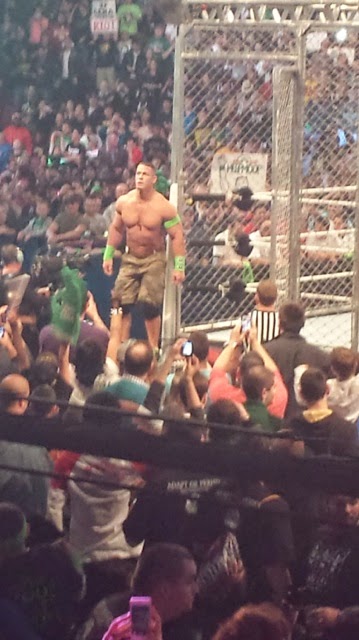 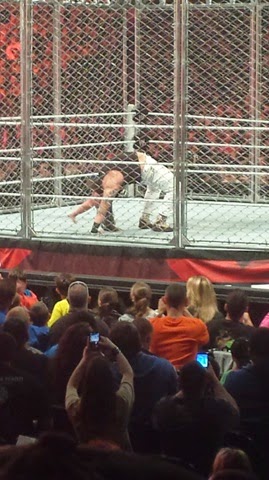 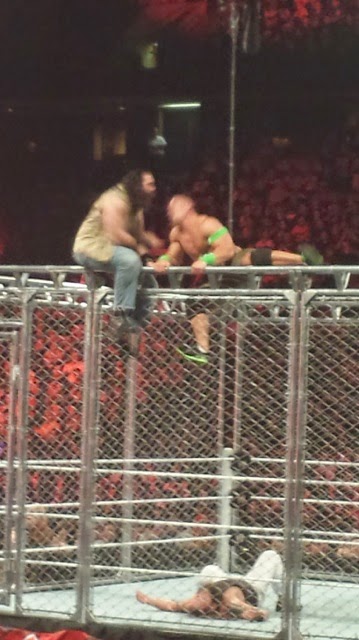 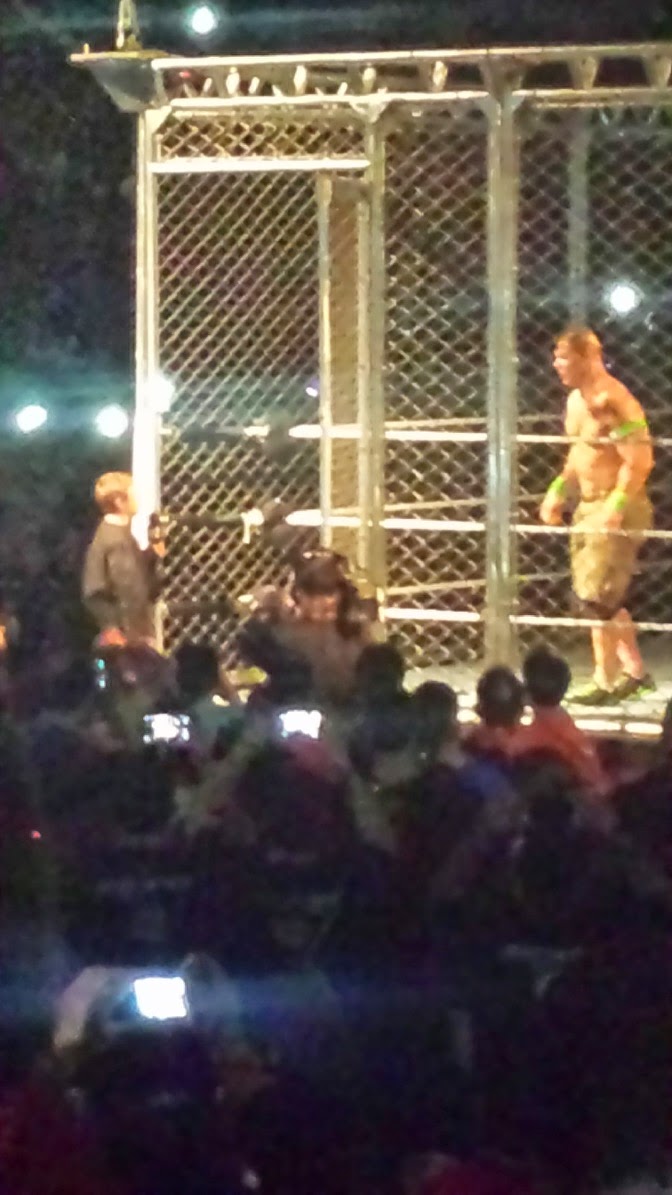 The WWE world championship match between crowd favorite and current champ, Daniel Bryan vs. the demon Kane called for a forklift and fire extinguisher after they dragged the fight out of the ring and into a loading dock. 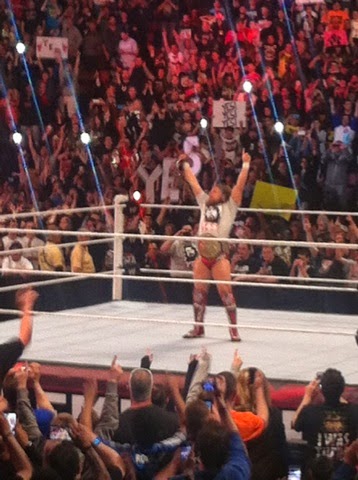 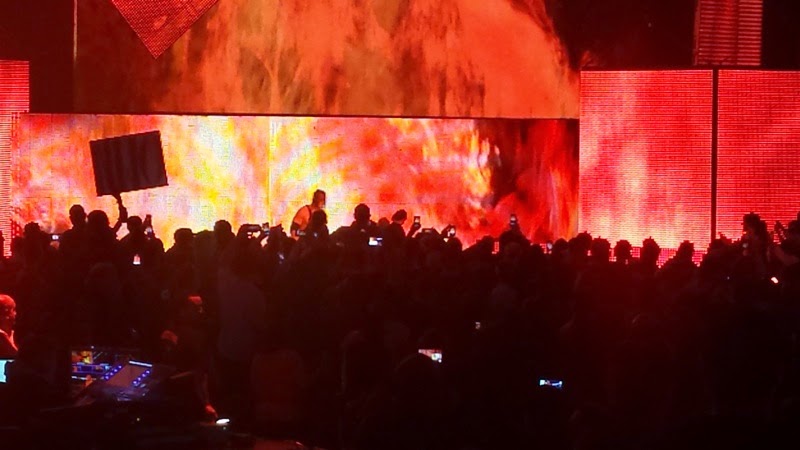 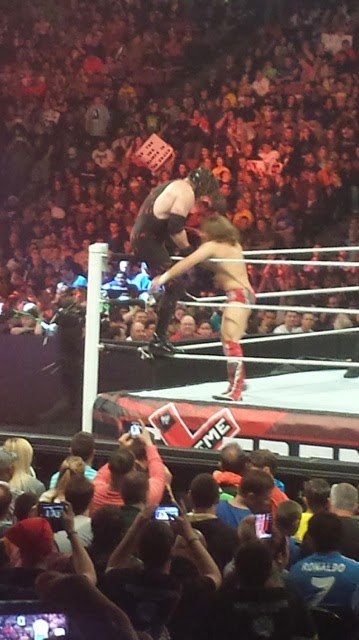 You can find the WWE Extreme Rules 2014 results online, but If you'd rather view all the Extreme Rules action for yourself, you still can by signing up for the WWE network which we really love because it's affordable. One Pay-Per-View event usually costs $60 from providers, but with the monthly subscription to the WWE Network you can see all 12 Pay-Per-View events for $9.99 per month w/ a 6 month commitment. You can also discover what other WWE family experiences we've had and new content and products that are out right now, here.

And as a special treat for all our fellow WWE fans + Dellah's Jubilation readers, I'm hosting a giveaway of some pretty awesome WWE products. Enter the rafflecopter below for your chance to win! [Items pictured in top left corner of post]

a Rafflecopter giveaway
Posted by Dellah at 9:24 PM