Elated with Etsy: Style Your Own Solange Inspired Wedding 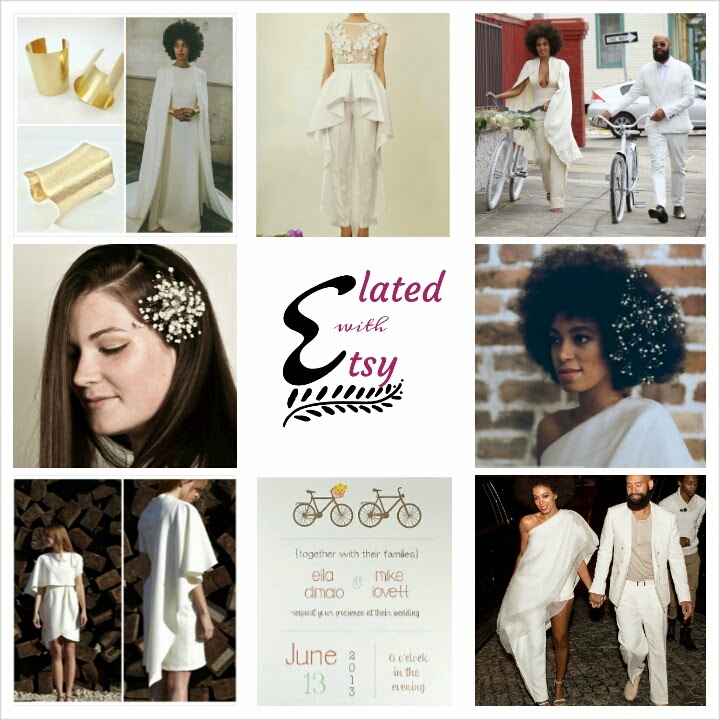 What can I say, I freakin'  loved everything about Solange's wedding day because you could see that it was planned around the couple's eclectic, laid back style and I love seeing unions celebrated in a way that reflects their own personal taste. She may be known to some as Beyonce's lil' sister but Solange has made a name for herself & is the epitome of going against the grain, in a good way! As one of today's most fashionable influencers she gives us lots of chic, quirky-glamour and edginess that seems effortless. She showed us all how you can shut the internet down with grace and it's been exciting as well as inspiring to see how her style has evolved over the years.

A traditional veil was replaced with a bad-ass cape and glamorous golden cuffs around her wrists that had her resembling a modern day superwoman as she said her I do's.

From the baby's breath that adorned her Diana Ross-esque fro, to the sexy, egg-shell white jumpsuit she wore while pedaling side by side with her extremely dapper hubby, to the asymmetrical dress which was one of many outfit changes she wore as they celebrated the night away in New Orleans.

Every, single last detail was ah-mazing!

Want to try to recreate parts of her wedding day style? Well discover these Etsy finds that I thought channeled the day best: