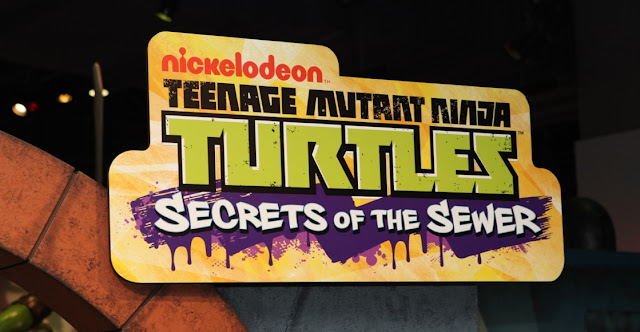 The infamous hero's in a half shell - Raphael, Michelangelo, Leonardo and Donatello are causing a bit of Turtlemania with the new exhibit Teenage Mutant Ninja Turtles: Secret of the Sewers exhibit at the Liberty Science Center in New Jersey which made it's East Coast debut just in time for turtle loving fans to explore while on summer break. It was without question that when we were asked to attend a press preview of the new exhibit by Momtrends and Liberty Science Center that we were excited for all of the fun they had in store for us that included channeling our inner ninja, a private meet and greet with the four brothers and of course a pizza party!

Disclosure: This is a sponsored post and opinions expressed are 100% my own 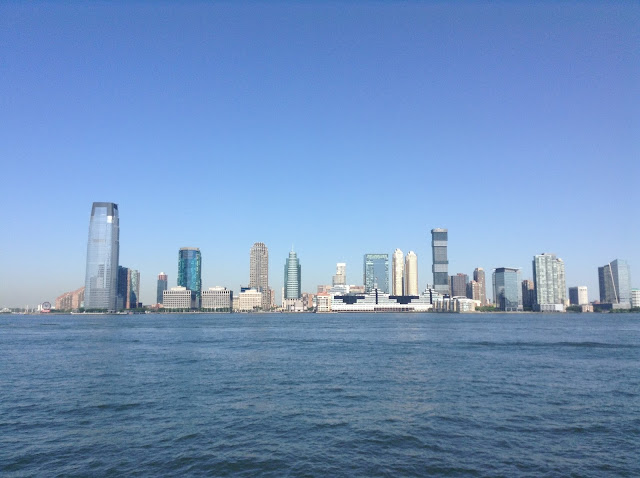 How to Get to Liberty Science Center:

Living in Queens and not having a drivers license {or any real desire to drive solely out of fear of crazy drivers} I'll quickly admit that we normally don't travel to New Jersey often and with the hubby working last weekend I wasn't too sure about the commute, or what I assumed would be an overwhelming trek to the science center. To my pleasant surprise, it wasn't daunting AT ALL! We ended up taking the E train down to World Trade Center and then caught the Liberty Landing Ferry at the World Financial Terminal, which was great. In the warmer months on a sunny day like the one we had I'd totally suggest it over taking the Path Train to NJ because the kids had a blast and it's really scenic and relaxing. We all loved it, so much so that once we got to the science center we made sure to tell all of our blogging friends that hadn't traveled that way, why they should and a handful of them actually decided to take the ferry home instead. If you aren't a fan of boats, then of course it's great that there's the option to drive or take the train. 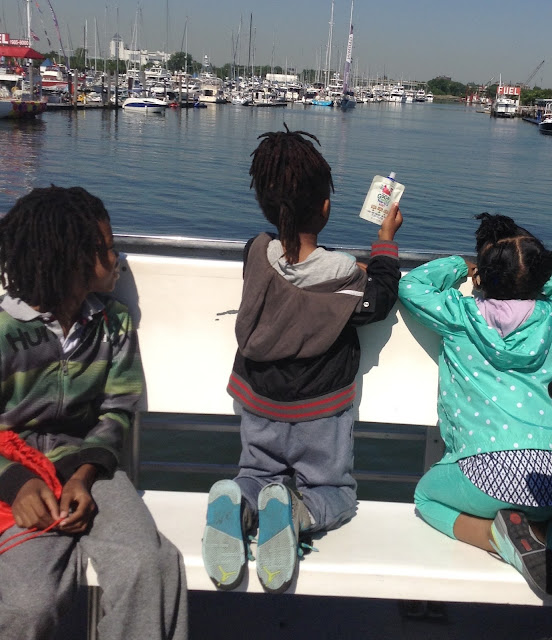 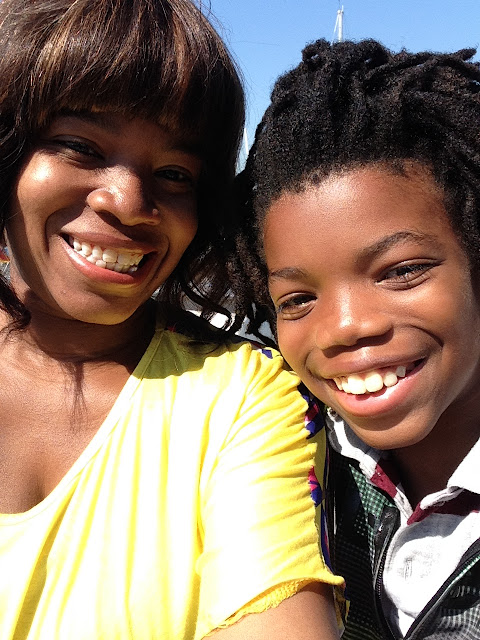 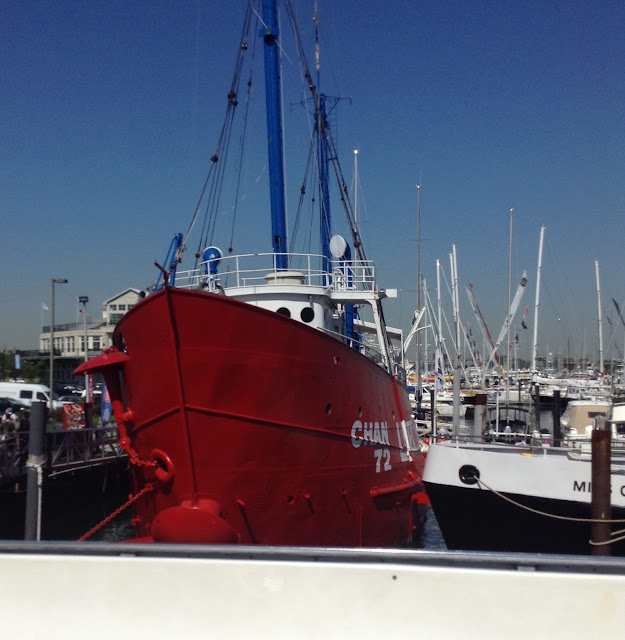 Key Reasons Why a Trip on the Liberty Landing Ferry is Totally Worth it:


The walk once you depart the ferry is about 15-20 minutes depending on if you have little tiny feet accompanying you, but it's simple to get to the center just by following the path. 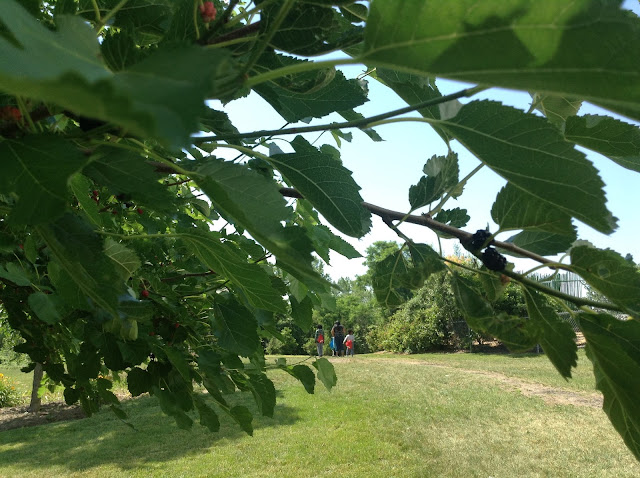 We arrived and were instantly enthralled by the series of ninja training sessions at the Pizza Ninja Academy that were set up in a room for everyone to test their skill before heading to the exhibit itself. 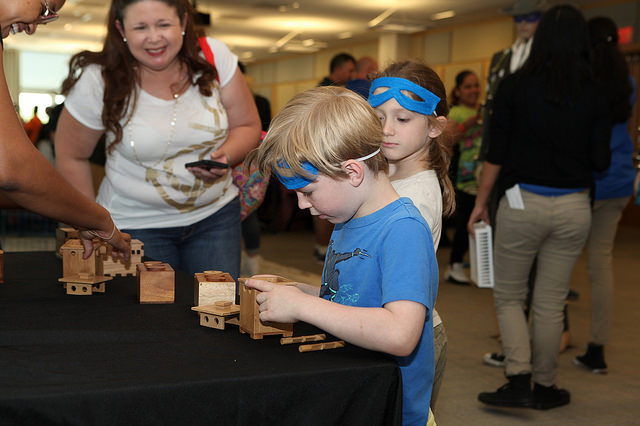 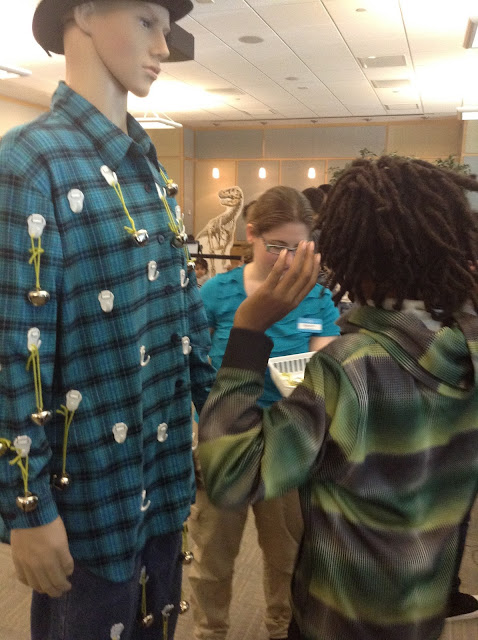 Do any of you remember the scene from one of the original Teenage Mutant Ninja Turtles movies where the turtles are being taught how to be stealth like - by removing multiple bells off of the jacket worn by a mannequin? Having trained in martial arts as a little girl, it's actually one of my favorite scenes and so I was really amazed that they had this set up for the kids to try and all the lil' monsters had such a great time and I saw a few parents trying to see how many they could grab silently too.

These city kids are tough competitors as they practiced their grappling skills to see who was the best. 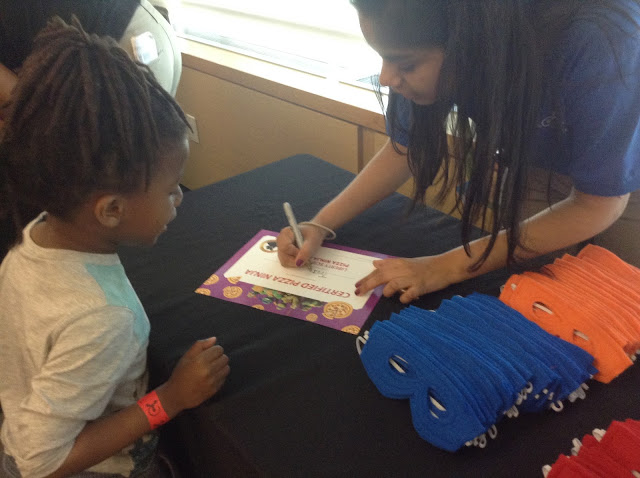 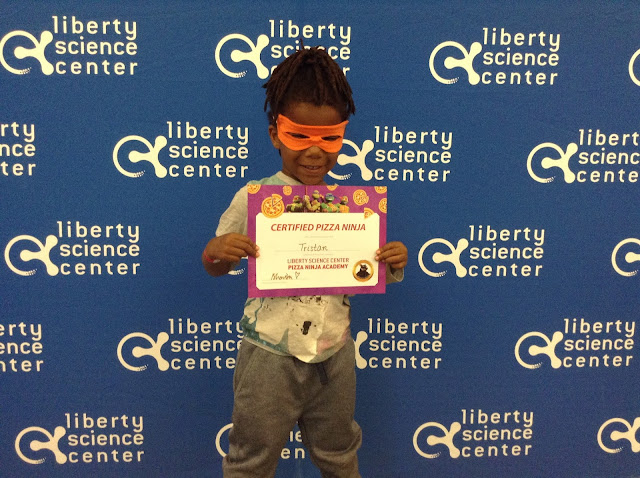 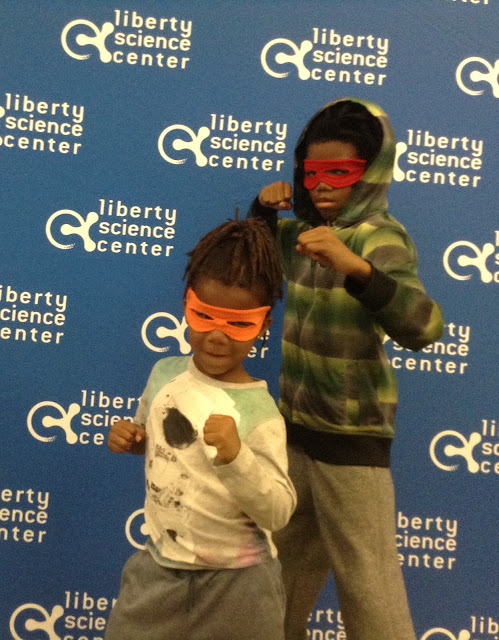 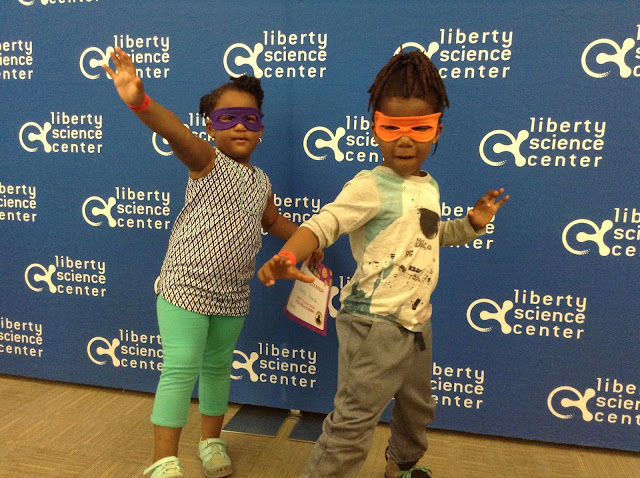 Once training was complete the little ones received a certificate of honor which also meant they earned themselves a few slices of pizza after working up an appetite. 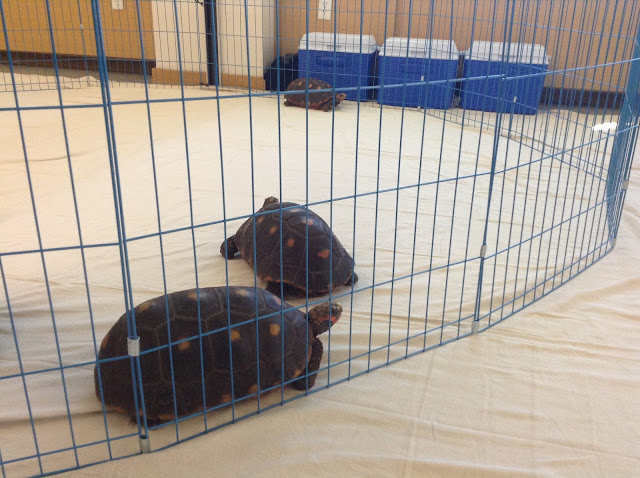 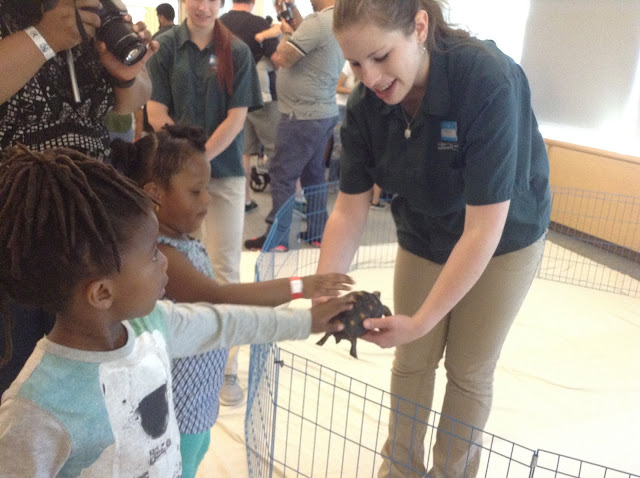 In between their intense training, families dug into a variety of pizzas and snapped a few adorable pics with both real tortoises and the iconic characters themselves. My boys even taught Donatello how to Dab, which they thought was hysterical. 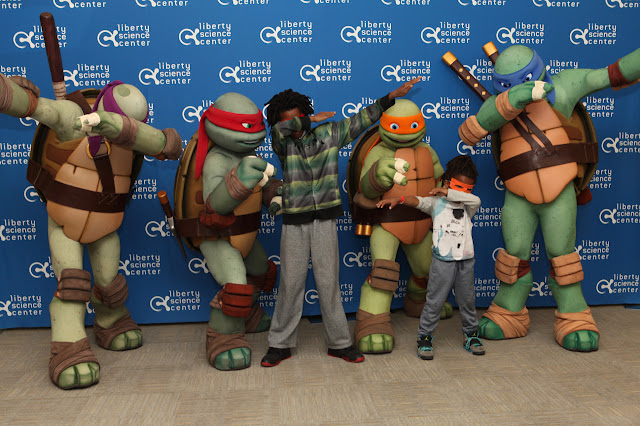 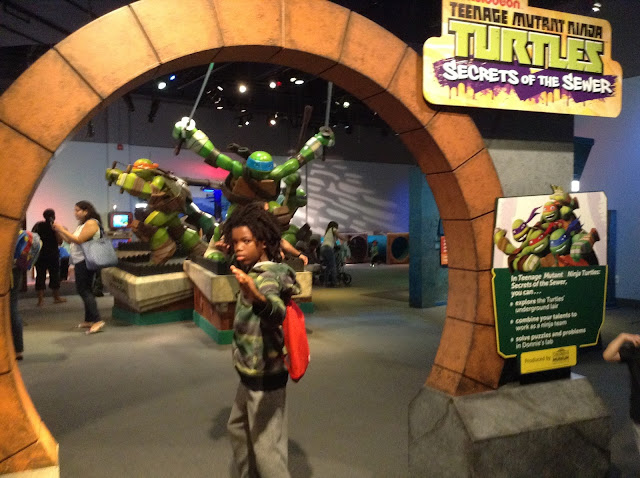 Once you step inside you'll feel like you're down below the streets of New York in the city's sewers, without the gross feeling, and as a New Yorker, I totally loved the cool graffiti on the walls. With larger than life statues of the heroes at the entrance visitors will find TMNT inspired fun at every turn. My boys being five years a part both enjoyed it and I had a hard time keeping up with them as they played with friends.

Through team-building challenges, collaborative games and mind-teasing puzzles, families and friends will learn skills to help them successfully work together. Here are a few examples: 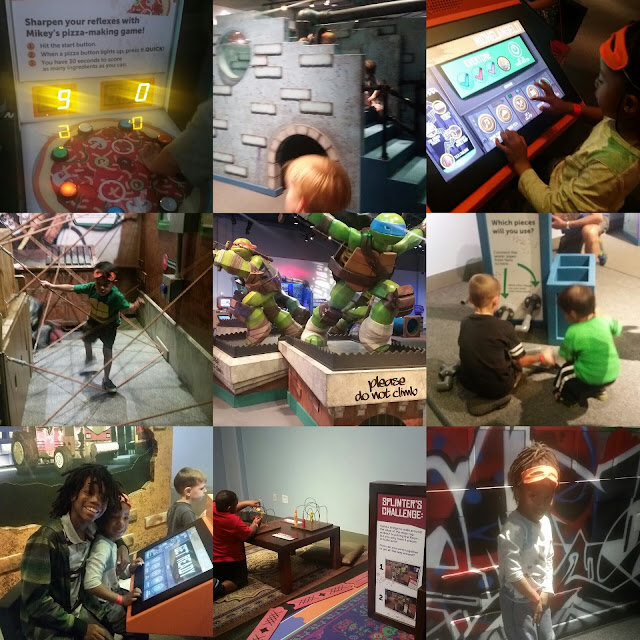 There is definitely something for everyone in this exhibit and as a parent you'll love that it's not overwhelming in size which will allow you to keep an eye on your kids from every corner of the room. Just make sure you check in those sewer pipes for sneaky little ninjas, lurking! 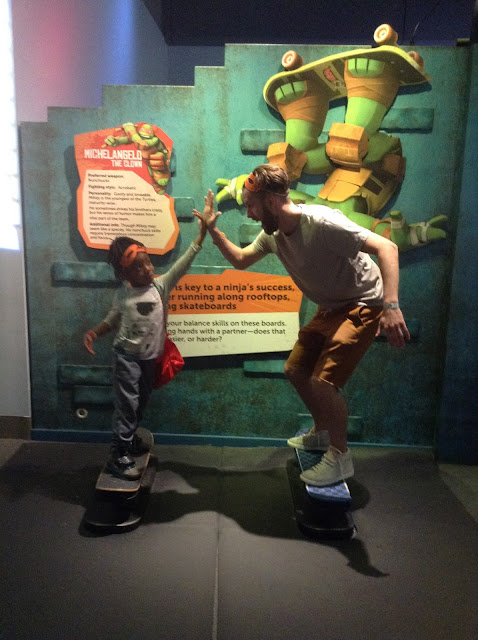 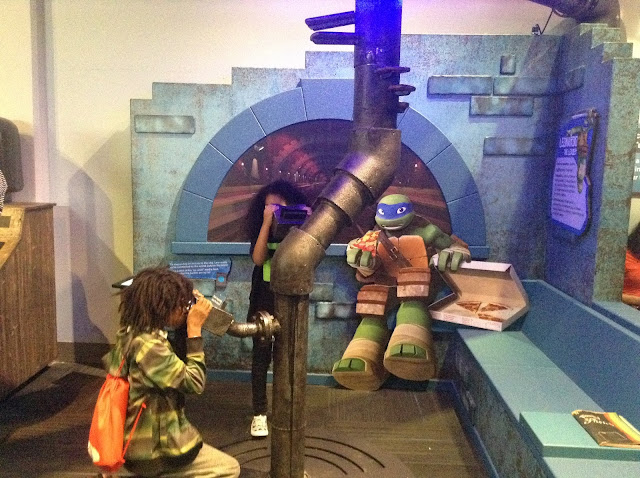 After having so much fun we headed to a special treat for that weekend, a Science of Pizza Making demo where the kids met Donatella Arpai, a celebrity chef who taught them all about the history of pizza and how it is made. The kids had the chance to kneed, roll and flip the dough, who wouldn't love the chance to play with their food? 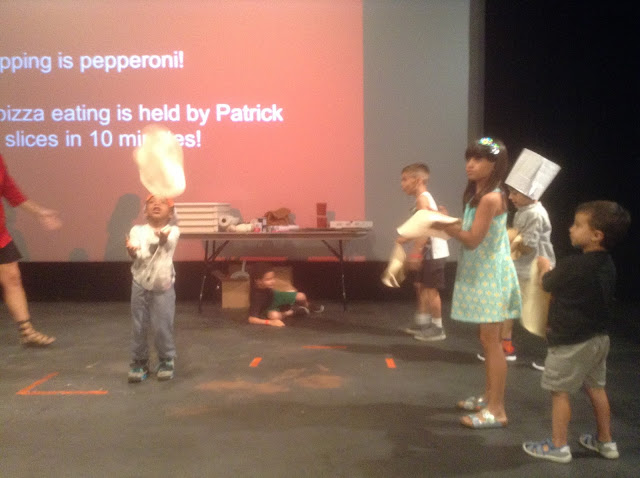 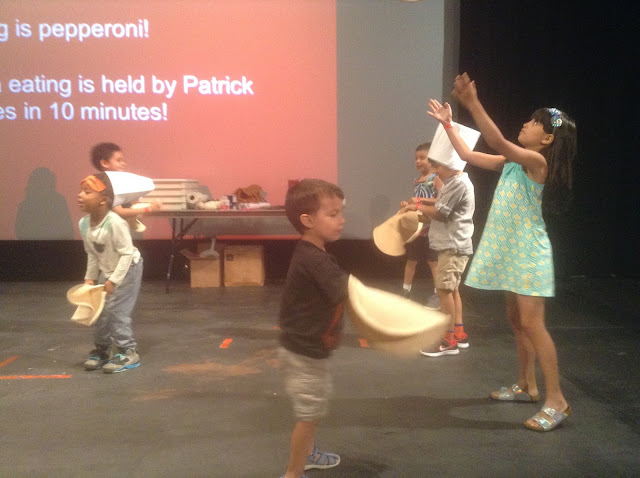 If you live in the boroughs and don't drive, don't let it deter you from venturing out to Liberty Science Center because it's such an easy and pretty affordable commute. Seasonal exhibits like these are a great reason to take a visit and to even consider getting your membership for because they are included. Take a look at our first trip to Liberty Science Center as a family.

Nickelodeon’s Teenage Mutant Ninja Turtles: Secrets of the Sewer will be at Liberty Science Center through September 5, and is included with general admission tickets ($21.75 for adults, $18.75 for seniors 62+, and $17.75 for children ages 2-12). Members and children under 2 are free. To learn more about the exhibit and to plan your trip head over to lsc.org