The Emoji Movie: Not as Poopy as the Critics Make it Seem & a Few Fun Interviews #EmojiMovie 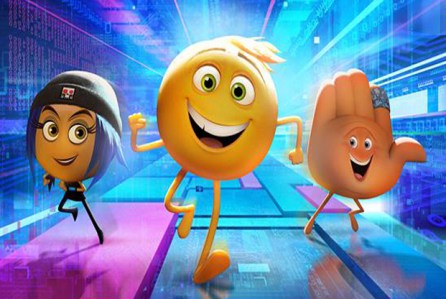 Let's face it, we're all so darn connected {maybe too connected} that sometimes it's just a lot easier to throw up a smiley face, a thumbs up or side eye emoji to quickly express what's on our mind.  And Seeing as our daily lives are consumed with the usage of apps that help us get through the day, whether it be a space to save our photos and keep our family schedules organized or a strategic game to keep the monsters entertained on our commutes all over the city, we honestly admit that we really wanted to see Sony Animation's new family friendly release of The Emoji Movie. The usage of emoji's has been a fun + simple way to express ourselves without the complexities of trying to find just the right words to get your feelings across and it's a form of communication that unlike trending slang seems to have no age barriers. Gotta love when the grandparents text back using them, it's kinda cute! This week we had the chance to screen the film before it hit theaters and leading up to it's release I had the opportunity to sit down with some of the cast and director of the film Tony Leondis.

The Emoji Movie unlocks the never-before-seen secret world inside your smartphone. Hidden within the messaging app is Textopolis, a bustling city where all your favorite emojis live, hoping to be selected by the phone's user. In this world, each emoji has only one facial expression - except for Gene (T.J. Miller), an exuberant emoji who was born without a filter and is bursting with multiple expressions. Determined to become "normal" like the other emojis, Gene enlists the help of his handy best friend Hi-5 (James Corden) and the notorious code breaker emoji Jailbreak (Anna Faris). Together, they embark on an epic "app-venture" through the apps on the phone, each its own wild and fun world, to find the Code that will fix Gene. But when a greater danger threatens the phone, the fate of all emojis depends on these three unlikely friends who must save their world before it's deleted forever. 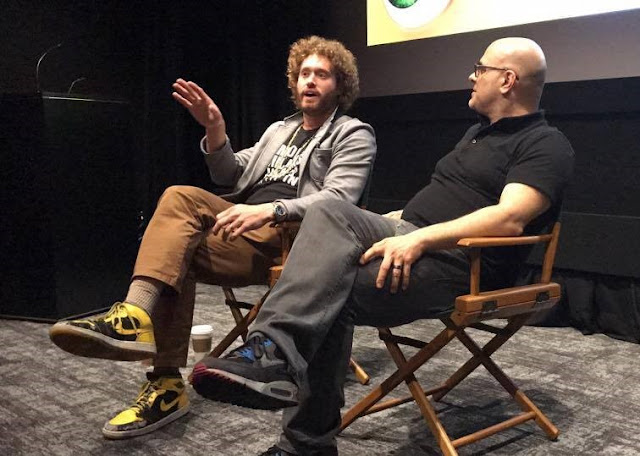 T.J Miller was the perfect actor to play the role of Gene the emoji "Meh" because he's probably one of the most expressive people you'd ever meet. Having no filter for showing how they feel is definitely what they both have in common.

You will appreciate the theme of "Individuality" in the movie as it shows how often times being different can be threatening to others. Today more than ever it seems like people seem to pride themselves on being indifferent when more than ever we should be encouraging that it's cool to care about the issues around us & for each other . We need to make sure that our children know that it's great to want to celebrate each others differences.

I'm hoping that my own two boys will always feel comfortable enough to express themselves {respectfully} no matter what it is because as their parents our love for them will be unwavering and despite how harsh the world can be, staying true to themselves is so important. 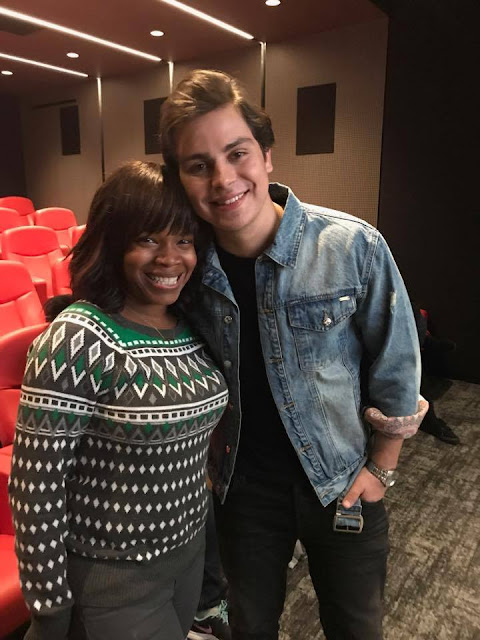 With a tween-aged middle schooler at home, as a mom I know that CJ and his friends are often chatting and texting about their every day happenings. I'm dreading the day when I find out he's crushing on a girl but totally understand that the day is inevitable . You should see how many times I've freaked when he's been facing time girls or talking to them on the phone, despite the conversations mostly being about a school assignment. 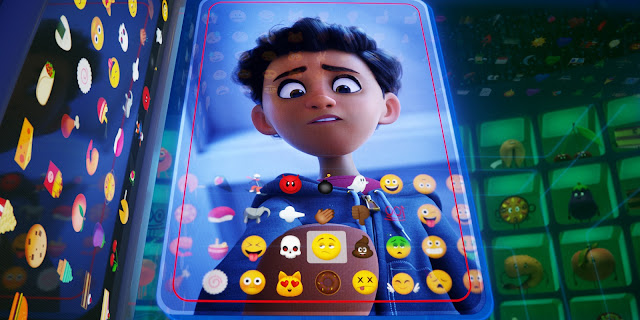 In the film the character Alex {voiced by Jake T. Austin, who's just so sweet and humble, starred in Disney Channel's 's Wizards of Waverly Place & voiced popular Nickelodeon character Diego} has been trying to text a girl he's into and he can't figure out which emoji is the best one to respond with.

Jail break is clearly the non-conformist SHE-RO of the movie who's dreamed of living by her own rules in the Cloud. Unlike the other emoji's this blue-haired cynical hacker doesn't live in a box and knows quite a bit about computers. Gene's hope is that she can "fix" him and make him normal.

Playing an emoji that's chipper and bubbly seems like it would be way too easy for Maya Rudolph because having chatted with her for the second time in person, she's really upbeat and charming. Her character Smiler is majorly deceptive, she may have a huge cheeseball grin on her face but she's downright evil as she plots to destroy Gene and convinces everyone that he's a malfunction. My youngest noticed right away how terrible it was to teach people that they can only expressive themselves in one single way "Mommy why does she want everyone to be just one way - it's good to laugh and smile and its ok to be sad or angry, right" 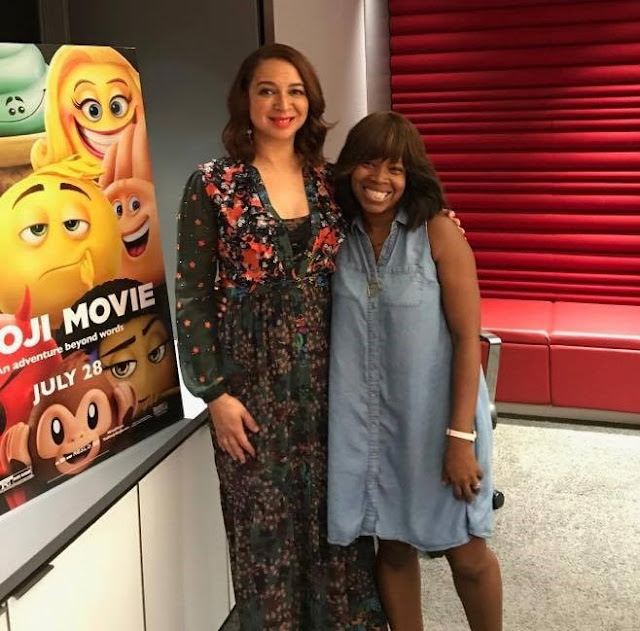 As a mother of four, Maya explained how nobody prepares you for navigating parenting in such a highly connected & tech consuming world. Managing electronics and social media along with the monitoring of the time used on these highly addictive gadgets can be a juggle sometimes.  Speaking with her was relatable, because our oldest children are about the same age, and her kids aren't on social media and don't have cellphones. Leave it to my son CJ and he'll try to convince you that he's the only almost teenaged kid in the universe that doesn't have a phone.  Maya voiced concern over her daughter playing a fashion themed game where players voted on each other's outfits. I totally understood why this bothered her and agreed that the idea of rating each other ,voting and counting likes just allows our kids to fall into the trap of judging each other. Honestly we aren't all "experts", we have to teach our kids that we don't need validation from all of these things, from all of these friends and followers. 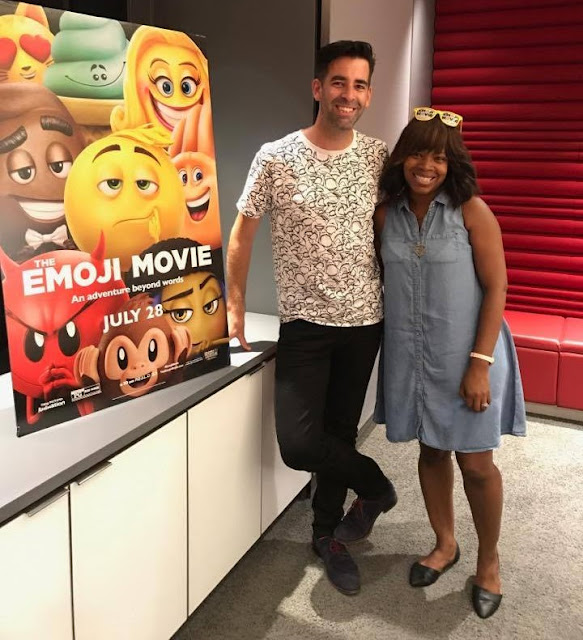 Nowaday's there seems to be a National Holiday for just about everything from lipstick to waffles and pets. Did you know World Emoji Day was celebrated on July 17th of this year? Or that there's an encyclopedia for the colorfully expressive symbols called the Emojipedia? During this month's press junket we learned from World Emoji Day & Emojipedia creator Jeremy Burge that there are 2,666 emojis in existence in the unicode as of this June and that there is a committee that he is a part of that votes on the creation of new ones like the recently released Breastfeeding, Meditating and Head scarf wearing ones. 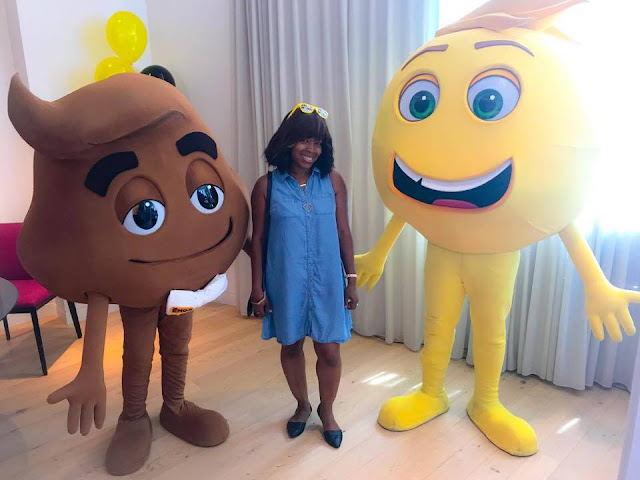 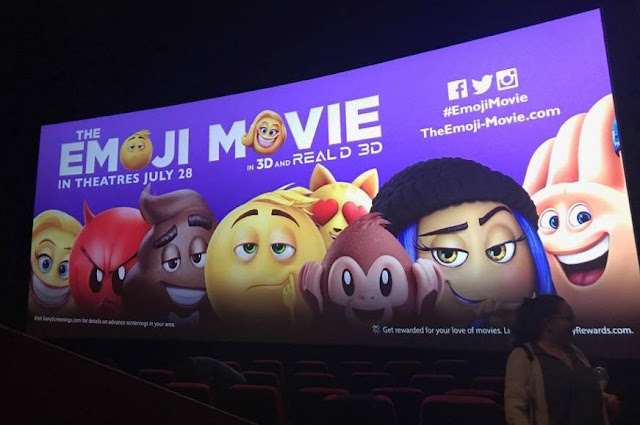 Would I say that the Emoji Movie will take home any big wins during award season - no, not likely. But not every good movie, has to right? Ultimately there's a great message for kids, you'll enjoy the Just Dance scene, where we are introduced the new, silly move "The Emoji Pop". Tony Award-winning, host of "The Late Late Show", James Corden plays Hi-5 and is really funny as to be expected while his character helps to show the importance of friendship even if you aren't one of the cool kids.

We love movies that show the inner workings of something that gets used by millions on the daily. The Emoji movie follows themes of two of our household Disney favorites, Wreck-it-Ralph and Inside Out. There are some moments where the jokes may go over your kid's head but it's not anywhere near as bad as some of these critic are making it out to be, because it wasn't a bad movie at all. 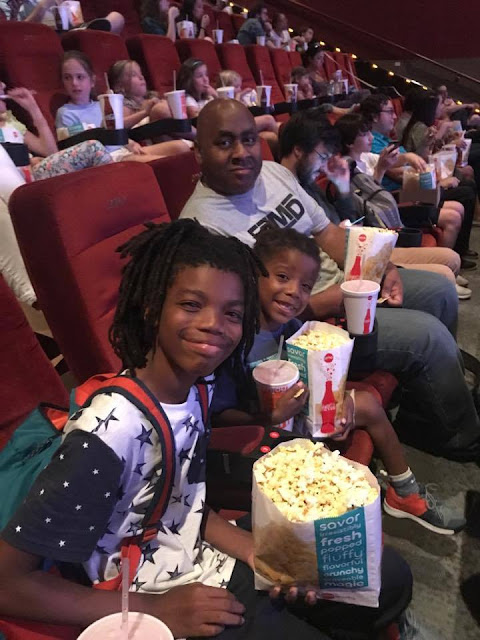 Our uncle Paulie thought he missed out on the chance to screen the movie because he saw me share a post about it on Facebook and surprisingly, he was excited when we asked him to join us. We even heard him laughing a few times, and the kids insisted on sending him an emoji filled text message from my cellphone once we returned home. Too cute for words! 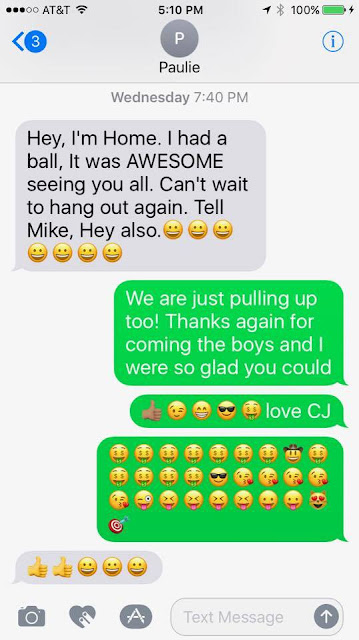 Head to theaters and check it out for yourself!