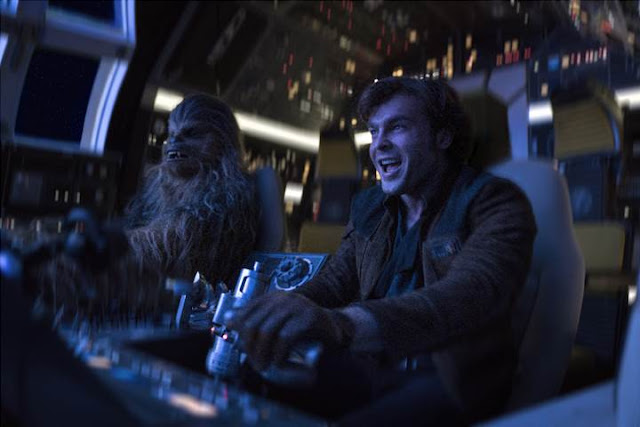 In honor of Star Wars’ release of SOLO: A Star Wars Story on May 25, 2018, I’ve teamed up with some amazing Disney Bloggers for a galactic giveaway of a Star Wars Gift Pack—a $300 value! No purchase necessary!

Before you enter to win the prizes below I thought you'd all love a few cool FUN FACTS from the movie:


VEHICLES & SPACESHIPS
• Han’s speeder is dressed with items as diverse as a Morris Minor bonnet hinge, a set of
baguette warmers and a re-fuelling nozzle from a Vickers VC10 aircraft.
• The 1960s-style chrome bezels and switchgear for the dashboard were purchased at a
second-hand auto parts sale.
• The final design of the white stripes on Han’s speeder were the result of almost 100
variations of width, shape, length, color and position!
• For stunt work, two of Han’s speeders were built on a custom-built chassis with a V8
engine, allowing them to reach over 100 mph!
• During the shoot, more than 80 tires were used on the two stunt-driving speeders due to
wear and tear.
• Two of Moloch’s speeders were also built on a custom-built chassis with a V8 engine.
• There is a real air intake from a helicopter incorporated into the Moloch vehicle grille
design.
• Three electric tugs were built, incorporating some triangular flood defense barriers for
their front bodywork, which were obtained from a government surplus supplier.
• The tugs were christened Huey, Dewey and Louie, after the Disney cartoon ducks because
they looked quite like ducks. Their names are written in Aurebesh on the fronts.
• A speeder that appears in the background in Corellia is very well traveled. It first appeared
in Star Wars: The Force Awakens in Abu Dhabi; it was then revamped and traveled to
Iceland for “Rogue One: A Star Wars Story,” and was then revamped for a second time
and shipped to the U.K. for this film.
• A Corellian factory vehicle and a mining vehicle in Kessel use a similar engine component
to that which appears on Rey’s speeder in Star Wars: The Force Awakens.
• During the kit-bashing process, as part of the skiff design, parts of Anakin’s podracer were
used on the concept model. When this model was scaled-up, these design details were
also scaled up and can be seen on the finished vehicle.
• The engine surrounds on the skiffs are actually made from the chrome wheel trims from
a 1966 Singer Chamois car.

PRODUCTION DESIGN
• The bridges in the frontier town of Fort Ypso were made “wobbly” using springs from a
Land Rover.
• The exterior Millennium Falcon build weighs 31 tons and has to be moved around using
two cranes.
• The interior Millennium Falcon set on C stage took three months to build. It is the largest
interior Falcon set ever made on any Star Wars film due to the addition of new areas.
• On the Interior Millennium Falcon cockpit set, rear projection screens have been utilized
so that the actors can see and react to pre-designed animations flying and entering
hyperspace! 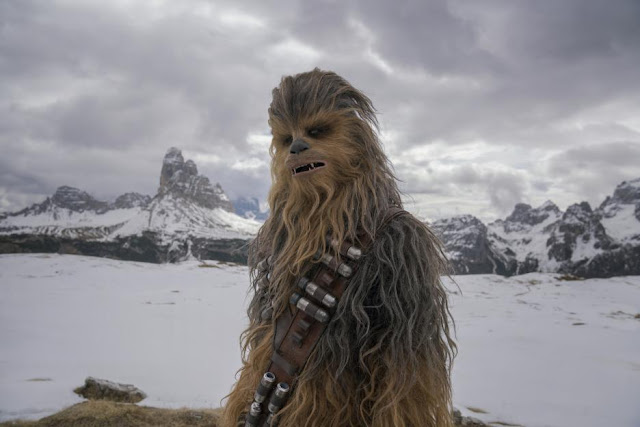 CREATURES
• Over 500 designs for the creatures were produced in the design process for the film.
• Six Eyes is the most sophisticated mechanical head ever produced. It has 50 servos inside
the head with on-board intelligence.
• This is the first film to feature Chewbacca in a lead role, so to achieve this level of onscreen
action, production produced eight suits and 10 heads. 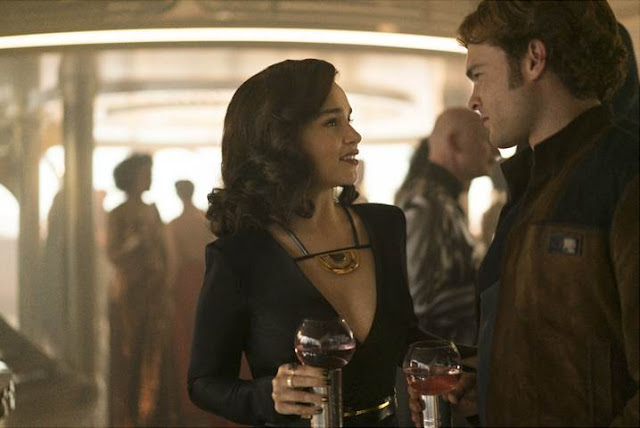 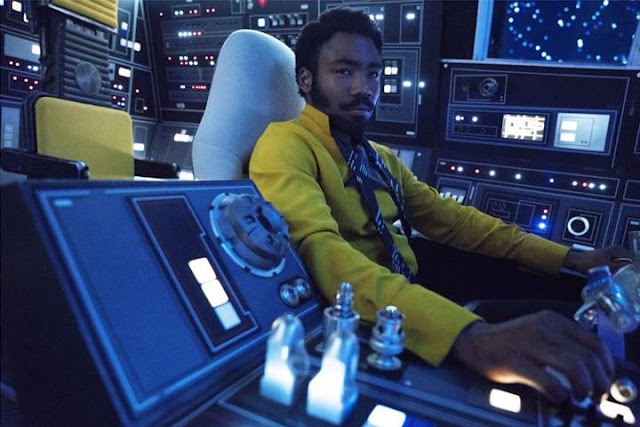 PROPS
• Nine copies of Beckett’s rifle were made. It is the rifle that ultimately becomes Han’s
pistol.
• Beckett, played by Woody Harrelson, has two pistols in the film. There are 10 copies of
each one for various purposes, such as soft ones for the fight scenes.
• Enfys Nest’s chainsaw pike had 14 copies of it made from a stunt version to ones that
open. One version was even made with pyrotechnic capabilities.
• There are 25 pairs of the iconic gold dice that hang in the Millennium Falcon. Three of
these were made by Tiffany.
• An R2 unit was turned into a BBQ fire pit for one of the scenes.
• Moloch’s staff features a carving of many faces; one of these faces has glasses on as the
designer decided to carve his own face into the staff.
• In Dryden’s yacht there are display cabinets, and among all of the treasures in them are
some that might be recognized from another film franchise: “Indiana Jones.” There are
the Sankara Stones from “Indiana Jones and the Temple of Doom,” the fertility idol from
“Raiders of the Lost Ark” and also the Holy Grail itself.
• Over a hundred E-11 mudtrooper blasters were made for the battlefield scenes on
Mimban. 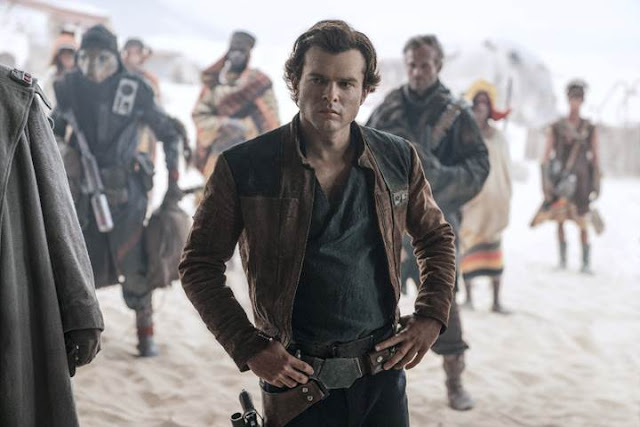 VISUAL EFFECTS
• The visual effects crew spent approximately 44 hours of airtime in helicopters in the
Dolomites and Fuerteventura scouting, shooting plates and photo-modeling.
• They also measured and mapped the interior and exterior of Fawley Power Station and
most of the surrounding site with sophisticated laser scanning equipment (Lidar). Around
200 acres in total!
• The visual effects team digitally scanned over 500 characters, props and sets.
• The on-set data wrangling team captured photo reference (still images), witness camera
data (small video cameras), and set survey data along with other reference
information. This data will total about 40TB, which will be sent to Industrial Light & Magic,who will use the data to assist in creating the visual effects shots for the movie.

Now for the Giveaway!  One (1) WINNER will receive a SOLO: A STAR WARS STORY inspired gift pack, with new collectibles and toys from Disney / Star Wars. The STAR WARS gift pack giveaway includes: 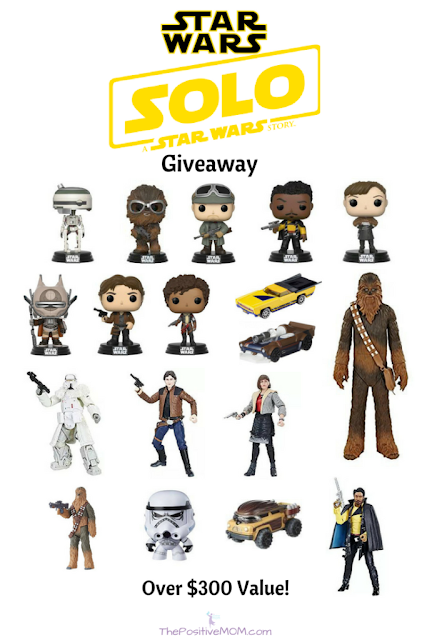 a Rafflecopter giveaway
Which of these STAR WARS collectibles is your favorite? Celebrate the Star Wars fan in your life (even yourself) with these amazing products. You can see the whole list of Han Solo movie inspired merchandise HERE.

This giveaway is hosted by: The Positive MOM and Disney Mom Guide