A Simple Space: The New Victory Theater Show that Throws Inhibitions Aside to Entertain Kids of All Ages #NewVictory 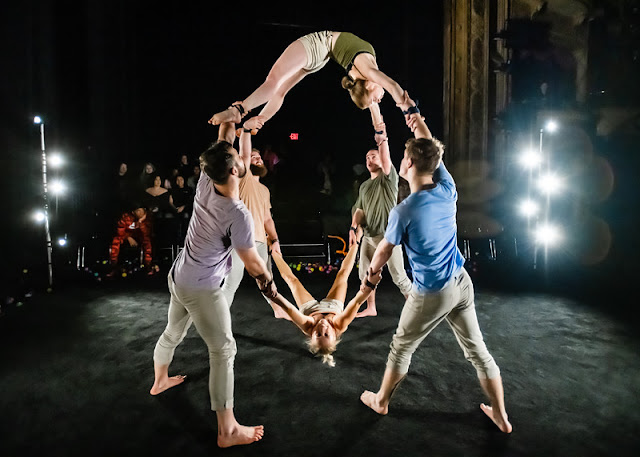 Winter break is in session and literally, while I write this post my two crazy boys are giggling in the midst of flipping each other and tossing one another around on my bed. Jokingly I tell them all the time that they should join the circus and entertain the world with the their stunts. I've got to wonder if childhood antics like these are what inspired Australian acrobatic ensemble Gravity & Other Myths to create their incredible show A SIMPLE SPACE which is playing at the New Victory theater now through February 24th, 2019.
Disclosure: We were extended complimentary tickets to facilitate this review and opinions expressed are 100% our own. 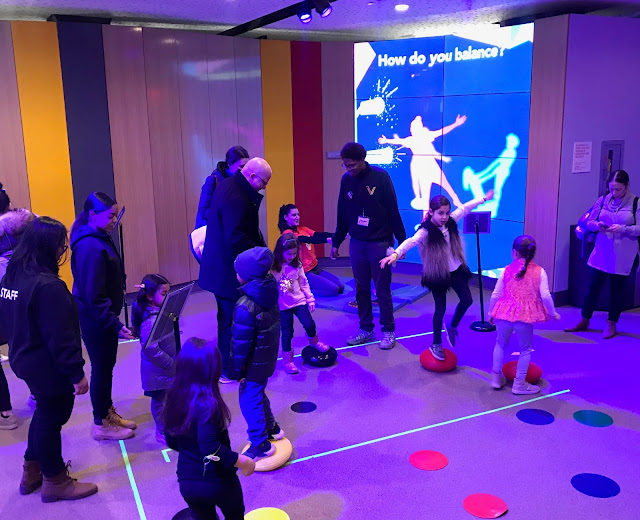 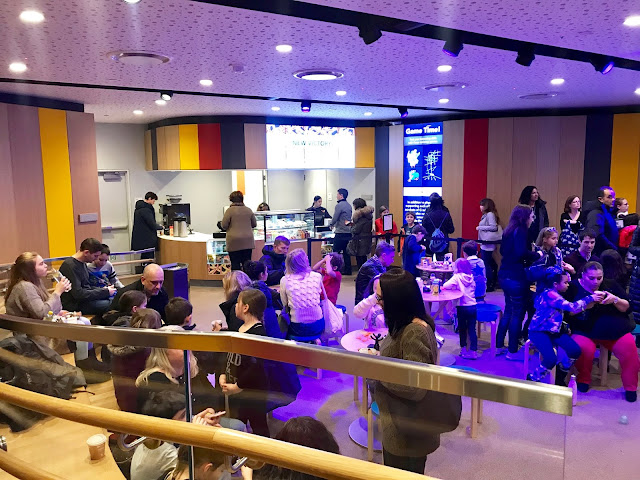 Favorites of the Spoleto Festival (2018, 2014) and the international festival circuit, Gravity & Other Myths entertain audiences of all ages with an engaging performance that will truly leave viewers in awe and Tristan and I had the chance to check out the show. If you've never been to the New Victory theater it's really one of the coolest places to take in a show and expose your kids to culture and the arts. If you arrive early enough you can grab a bite to eat and deepen your understanding of a show’s themes or art forms with arts-based activities thoughtfully designed by New Victory education staff. 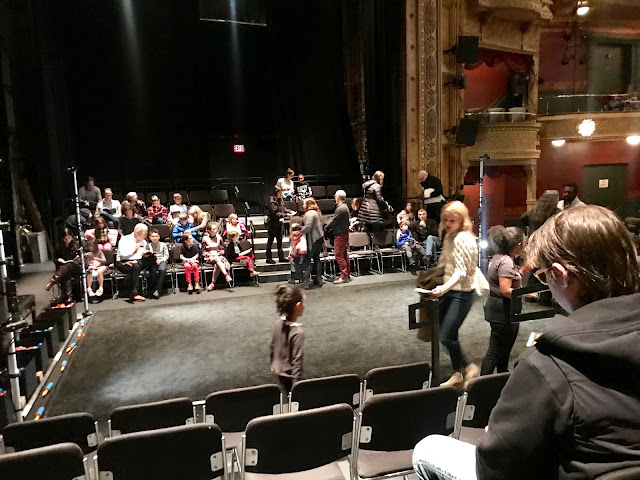 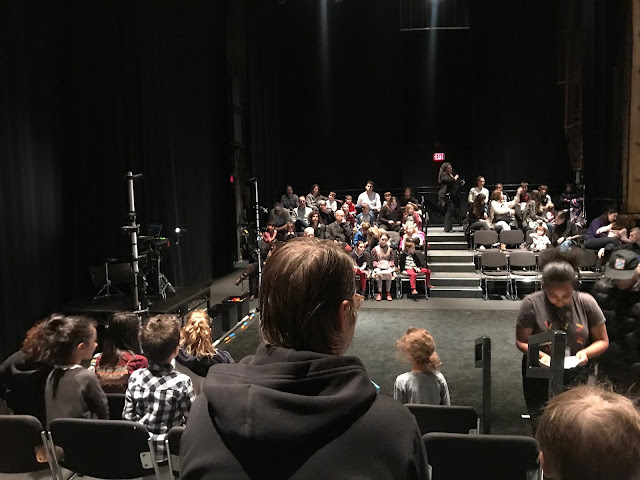 For what the show skips out on in flashy scenery, extravagant costumes and detailed lighting & effects they easily make up for in an impressive, raw display of talent & acrobatics. The set encompassed a carpet {which we all had to avoid stepping on because the cast spends the entire time performing on it}, a live percussion performance by a troupe performer who also participates in some of the physical acts, light stands at every corner of the carpet that created larger than life shadows throughout the theater, bins filled with colorful balls and just 7 talented troupe members. 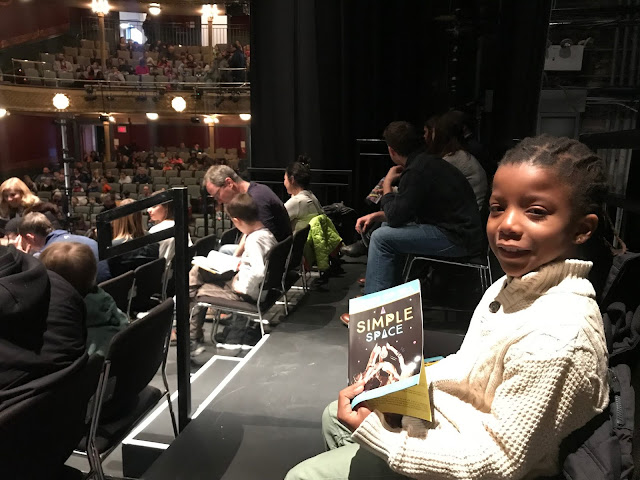 There's truly not a bad seat in the theater but if you'd like to get up close during the performance there's nothing like the opportunity to sit right up on stage to watch the captivating show just a few inches away. With stage seating you can see every intricate twist and turn of the performers bodies & hear every passion filled breathe as they aim to amaze us all without a safety net in place. 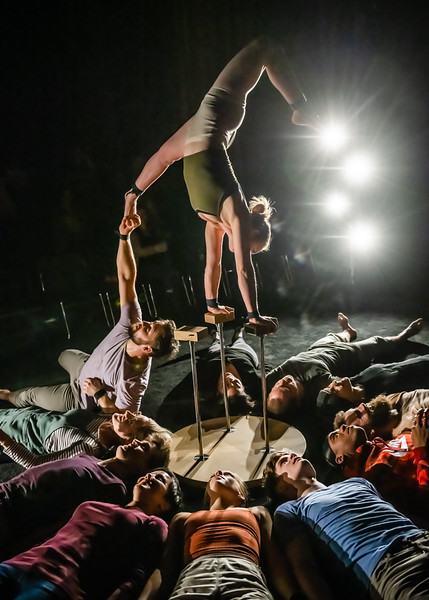 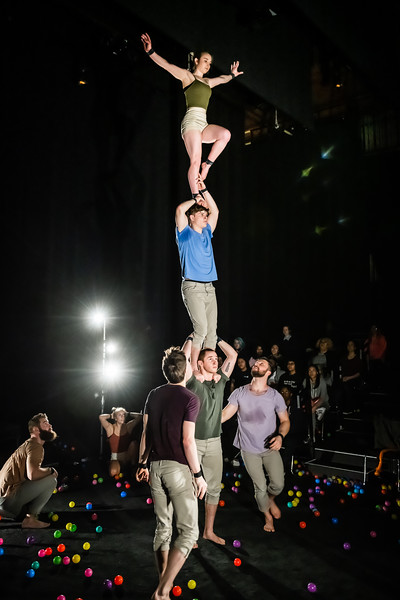 The simplicity and realness is what sets A Simple Space apart from many other circus type shows we've seen before. Stumbles and falls were taken in stride and didn't take away from the displays of pure strength, flexibility and creativity. Imagine taking a childhood game of jump rope up a notch by using two humans as the props, ha! I'm just glad Tristan hasn't suggested yet that he and his big brother try out some of the stunts at home. Tristan would turn to me and say "Whoa mom, how did they do that?" 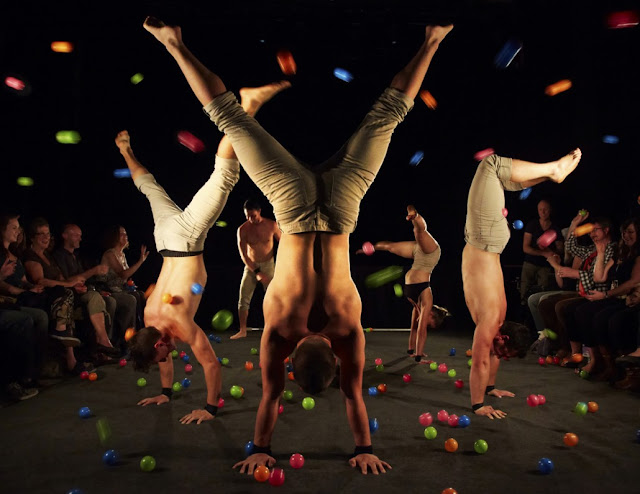 You can tell that on and off stage everyone is having a blast thanks to the show's humor filled moments. A bonus is that viewers can get in on the good time if they are chosen to participate, or get their hands on a few colorful balls to chuck at the cast while in mid handstand. Naturally that part took the energy level up and caused for quite a few laughs.
We'd recommend the show as a great family date, tickets are reasonably priced, it's perfect for all ages and not too long to sit through if you have little ones under the age of six.

Gravity & Other Myths was formed in 2009 by lifelong friends and graduates of the Cirkidz Circus School at the South Australian Circus Centre. Now, the troupe has tripled in size and grown to become an internationally renowned physical theater company. Pushing the boundaries of contemporary circus, Gravity & Other Myths has rocketed to stellar acclaim with a series of disarmingly accomplished ensemble works with a focus on human connection and acrobatic virtuosity. The company’s second show, Backbone, has toured internationally and already been nominated for multiple awards; their latest show, Out of Chaos, is scheduled to premiere at the Adelaide Festival in 2019.
A SIMPLE SPACE is co-directed by Gravity & Other Myths co-founders Lachlan Binns, Jascha Boyce, Jacob Randell, Martin Schreiber, Triton Tunis-Mitchell, and Elliot Zoerner. The show features the on-stage talents of acrobats Benton Adams-Walker, Rachael Boyd, Lachlan Harper, Jackson Manson, Ashleigh Pearce, Jacob Randell and Joshua Strachan. Elliot Zoerner is also the live percussionist and composer of this production.
Learn more about A SIMPLE SPACE at NewVictory.org
Remaining shows:
Monday, February 18 at 2pm Wednesday, February 20 at 2pm Thursday, February 21 at 2pm Friday, February 22 at 2pm / 7pm Saturday, February 23 at 2pm / 7pm Sunday, February 24 at 12pm / 4pm
A SIMPLE SPACE has a running time of 60 minutes with no intermission, and is recommended for ages 6 and up.
Ticket Information Full-price tickets for A SIMPLE SPACE start at $22. Special on stage seating starts at $42. Tickets are available online (http://www.newvictory.org) and by phone (646.223.3010)
Posted by Dellah at 4:10 PM