Watching Wrestling in our family is going 4 generations strong so when I think about all the cool and random moments we’ve had it’s really crazy to look back on all of our WWE experiences. My maternal grandmother {gramps} and my dad first introduced me to the sport and I was instantly hooked, naming my one boy cabbage patch doll after Virgil a professional wrestler for the WWF.

Fast forward to adulthood and my two boys CJ and Tristan have been fans of the WWE universe for nearly 5 years and have crazy dreams of becoming professional tag team partners one day. You can only imagine how excited we were to be invited to an early screening of Annapurna picture's new film "Fighting with My Family" - the life story of one of our fave WWE Divas Champ Paige!


FIGHTING WITH MY FAMILY is a heartwarming comedy based on the incredible true story of WWE Superstar Paige™. Born into a tight-knit wrestling family, Paige and her brother Zak are ecstatic when they get the once-in-a-lifetime opportunity to try out for WWE. But when only Paige earns a spot in the competitive training program, she must leave her family and face this new, cut-throat world alone. Paige’s journey pushes her to dig deep, fight for her family, and ultimately prove to the world that what makes her different is the very thing that can make her a star. 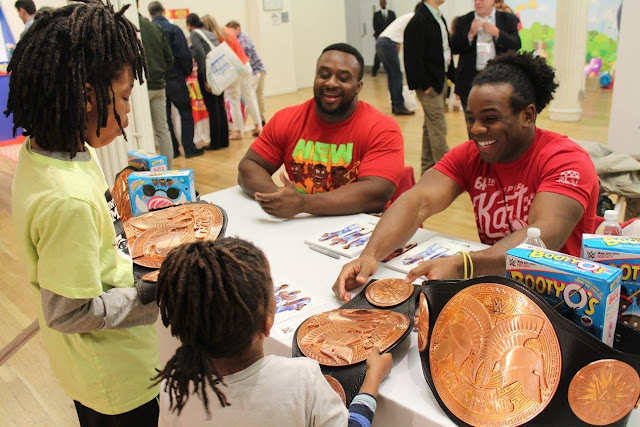 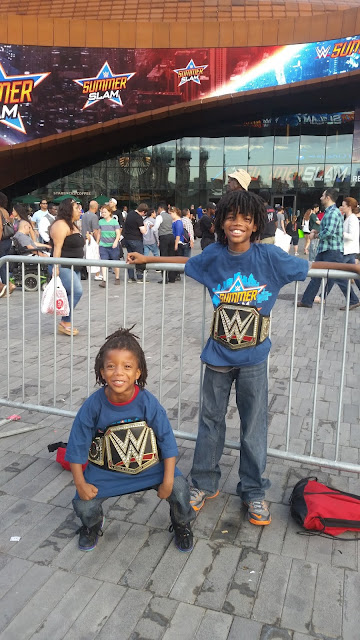 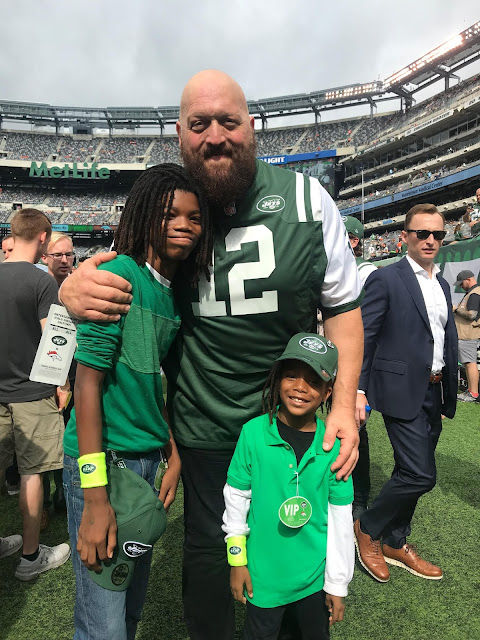 Watching my kids eyes light up when they once had the chance to hold the real tag team belts with Big E. Langston and Xavier Woods of The New Day and meeting so many superstars that inspire them daily, has definitely been a highlight for me as a fan and their mama. The idea of them wanting to become professional wrestlers is down right terrifying and exciting all at once, so I was looking forward to them getting a glimpse into what really goes into pursuing a career that's not only entertaining and fun, but requires commitment, can be physically grueling and mentally exhausting.

After screening the film and sitting down for an interview with the cast and director Stephen Merchant there were truly some fantastic takeaways from the movie  and conversation that can be appreciated and applied to life by viewers that may not be into the industry itself.


Make your Family Proud but Live for Yourself: 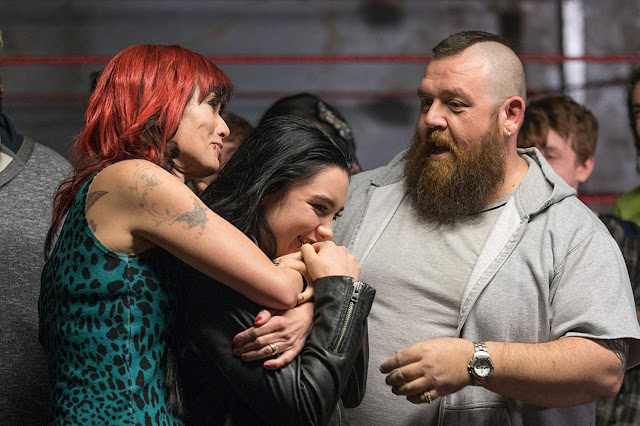 Everyone has a crazy family member or two {or three} and the Knight family is no exception! They're absolutely bonkers and what they may lack in poise they make up for in hard work & grit.  Like Julia and Ricky Knight {Lena Headey and Nick Frost} as parents we all want happiness and what's best for our children and sometimes we inadvertently impose our hopes & dreams onto our children.

Saraya {Florence Pugh} is faced with the question "Why are you here?" by WWE trainer Hutch Morgan {Vince Vaugn} and there are moments where we wonder if being a professional wrestler was something she'd always wanted for herself or if she was pursuing the career so not to disappoint the people she loves most & to help her struggling family.

Blogger: "Drawing on the fatherhood experience, what helped you kind of shape the character and the type of dad you were in the film thinking back and reflecting on the types of experiences you've had in your own life."

Nick Frost {dad, Ricky Knight}: I have two kids and I would literally do anything to make sure that they were safe and happy. You can have a violent past and be in prison and make mistakes and be a good dad. Those things aren't mutually exclusive. Ricky is a rough, hard man who's made mistakes, but he's also a good, kind man, who's a loving father.

Dream Big But Don't be Afraid to Fail: 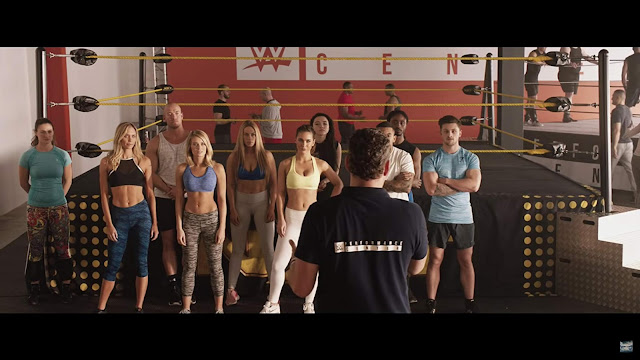 Failure sometimes is just a part of the process right? Both Saraya and her brother Zak {Jack Lowden} discover that no matter how much effort you put in, or how good you think you are the competition can be steep. If you're giving it your all, you can't beat yourself up over the setbacks. Comparing yourself to others tends to have us all easily loose sight of what brings joy to our life and we're so blinded that we forget what we've accomplished on the journey.

Our Question During the interview:

"My question to everyone would be, what advice would you give someone who wants to start out, like you guy's who've never been in the ring and now you've had this opportunity - what's hard about it, what would you say you should remember to do and not to do?"

Paige {WWE Divas Champ}: " Tuck your chin. When it comes to wrestling the first things you're going to be learning is to fall properly or it could lead to a banged head, a little stinger. So always tuck your chin; I learned that straight away. And also in wrestling, I would say be patient because it just isn't handed to you. It's a lot harder than how it looks and the same thing that Dwayne tells everyone is to stay humble and hungry. Humble because you want to be able to work with everyone and hungry because you never want to get complacent.

Stephen Merchant {Director}: " I think a part of the message of the film is that nothing is easy whether it's wrestling or anything else. Doors will be closed in your face, people will sometimes say no, sometimes you won't fit in, sometimes you'll be rejected and you just have to keep moving forward. You know you have to keep taking the punches and if you're passionate about it you just keep plowing on and eventually doors will open, and that's certainly true of all of us in our careers and I think certainly it's Paige's story - to keep moving forward."

Find your Voice & Stay True to You:

Throughout the film there are moments where Saraya finds herself struggling with developing a voice as Paige. Having a presence and being authentic in and out of the ring really does set the tone for how people will receive you and in many instances can make or break you in any field.

As executive producer of the film and a larger than life -superstar personality, Dwayne "The Rock" Johnson has a tremendously recognizable voice, but when asked how to win over the crowd he advises "I myself have come from a wrestling family too. I know exactly what it means to you. But don't worry about being the next me. Be the first you.

Blogger: " What advice would you give to young girls and women in general who feel stuck trying to find their place?"

Paige {WWE Divas Champ}: "Being yourself is your super power and that's the thing that got me to where I was in the first place. Never forget that, I can't preach that enough to people.  That was my issue for such a long time, I was never really comfortable with the way I was and I didn't think I was going to fit in anywhere. Always be yourself!" 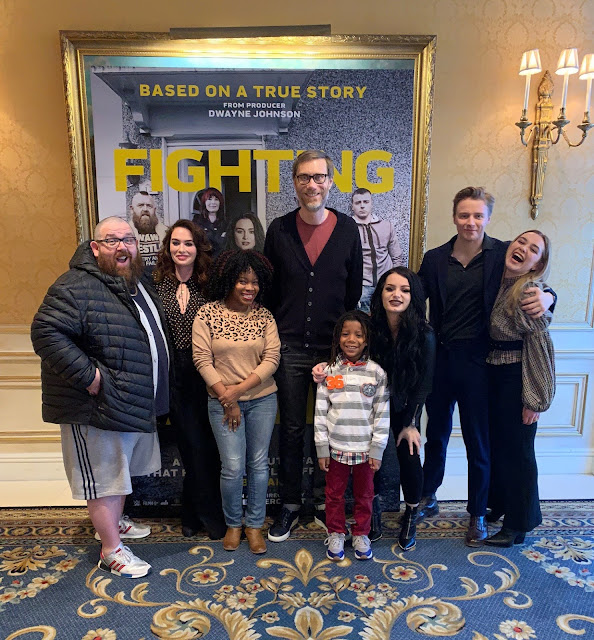 Can ya tell Tristan and I had the best time, he's still all giggly when he thinks about Paige calling him adorable and was so excited when she told him if she could ever return to the ring she'd love a match against her bestie Nia Jax or a trip to Suplex city! Thanks for having us Annapurna pictures, the movie was a blast to watch.