Toy Story 4 Review: Every Ending is A New Beginning as We Discover Purpose, A Voice and Prioritize Happiness

Whoa, where does the time go? It just dawned on me that it has been 9 years since we all thought the Toy Story franchise had come to an end as Woody, Buzz and the gang said farewell to their college-bound kid Andy and found themselves in a new room with the adorable, imaginative new kid Bonnie.

Last week the monsters and I had the chance to partake in an early screening of the latest Pixar adventure Toy Story 4 and I hope you all have plans to see it this weekend!  It was a truly hilarious journey between friends new and old, that highlights discovering your purpose, finding your voice and learning that it's really ok to prioritize your own happiness. You could feel the anticipation in the theater once the lights dimmed, and the sweetest giggles of a child two rows in front had us moviegoers all laughing before the opening rescue scene.

At the root of it, these iconic Disney Pixar characters are more than just our favorite toys who've been tugging at our heartstrings and making grown folks weepy for over 2 decades, they bring so many of our human characteristics to light in a relatable way. Would you have ever believed that Pixar's very first movie could carry such longevity and through animation allow us all to reflect on our own lives: successes, disappointments, and insecurities?

There's been a lot of internet buzz surrounding the film and whether or not there was a need for a third sequel and I'm going to say heck yes! I honestly think Toy Story 4 gives us the closure we didn't even think we needed and I'm happy that Disney Pixar decided to do it. Now, not everything in the film gave me the magical feels but didn't take away from the overall enjoyment and I'll break that all down in this spoiler-free review. 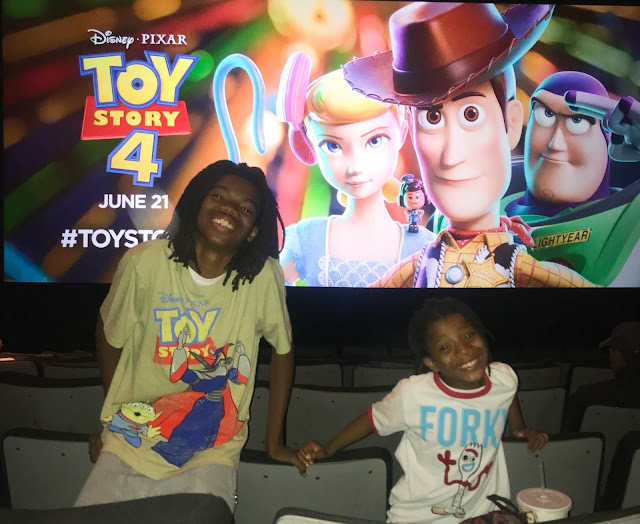 ABOUT “TOY STORY 4”:
Woody (voice of Tom Hanks) has always been confident about his place in the world, and that his priority is taking care of his kid, whether that’s Andy or Bonnie. So, when Bonnie’s beloved new craft-project-turned-toy, Forky (voice of Tony Hale), declares himself as “trash” and not a toy, Woody takes it upon himself to show Forky why he should embrace being a toy. But when Bonnie takes the whole gang on her family’s road trip excursion, Woody ends up on an unexpected detour that includes a reunion with his long-lost friend Bo Peep (voice of Annie Potts). After years of being on her own, Bo’s adventurous spirit and life on the road belie her delicate porcelain exterior. As Woody and Bo realize they’re worlds apart when it comes to life as a toy, they soon come to find that’s the least of their worries. Directed by Josh Cooley (“Riley’s First Date?”), and produced by Mark Nielsen (associate producer “Inside Out”) and Jonas Rivera (“Inside Out,” “Up”), Disney and Pixar’s “Toy Story 4” ventures to U.S. theaters on June 21, 2019.

Discovering New Friends & Purpose:
“Alright, Forky. You have to understand how lucky you are right now. You’re Bonnie’s toy. You are going to help create happy memories that will last for the rest of her life.” - Woody

Woody has always prided himself on being loyal and there for his kid, sometimes resembling a parental figure who always knows and wants what's best. As a mom with a soon to be high-schooler, I can't even imagine what my days would be like if CJ were my only child heading off to college. Not having him around to love on and create memories with or guide and set boundaries for, would feel really crazy.

Now that he's no longer the favorite and collecting dust bunnies (named tumbleweeds) in the closet, Woody has to find a new purpose as Bonnie transitions into Kindergarten. In true form, our heroic Sheriff stowaways in her backpack and is quick on his spurs to help her feel more comfortable in the classroom by providing Bonnie with random materials to create a new friend, a whatzit named Forky! From the very first teaser trailer, we fell in love with Forky, he's definitely a handful of anxiety, mixed with silly innocence and entertaining to watch.

Definitively and with conviction, once he's made it to Bonnie's room Forky says "I'm trash" and establishes that he's a spork that exists merely for soups or salads and makes several hysterical attempts at tossing himself in any receptacle bin within his googly-eyed view. As the saying goes "One man's trash is another one's treasure" and Forky isn't just Bonnie's saving grace but Woody's too.  As the adventure unfolds on an RV trip that takes all the toys on a crazy ride where they meet another set of misfit and abandoned toys at a carnival and within a creepy antique store, Woody makes himself useful and finds meaning in making sure Forky knows how important he is in comforting Bonnie. Leaving no toy behind, Woody is determined to rescue Forky after he throws himself out of the moving camper.


This time around, it seemed several of the characters are trying to find their voice and in scenes with Buzz Lightyear we see him tapping away at the colorful buttons on his suit to guide him to make the best decisions while he leads the other toys in Woody's absence. Buzz would do anything to support his pull-string buddy, but when his efforts land him in a carnival game booth as an inadvertent prize, he turns to his inner voice for guidance.

We're introduced to Gabby Gabby (voiced by Christina Hendricks) an antique pull string doll with a manufacturing defect who's voice box doesn't work and only has her eery henchman of sorts Benton and other voiceless ventriloquist buddies to keep her company. Gabby Gabby knows that if she can get her voice box repaired a little girl will fall in love and want her but as cute as she is, she gives off some creepy vibes.

I'll admit, if you have young ones who scare easily, Pixar really pushed the fear factor this time around. There was definitely a jump scare moment where the scene flickers and we could see the entire row in front of us leap back in their seats, totally unexpected. My boys are 8 and 14 so we loved every minute of it, they laughed at themselves for actually being freaked out by characters that don't even speak.

Prioritizing Your Own Happiness

Bo Peep is back and it's awesome to see how well Woody and Buzz's longtime friend has adjusted since leaving the playroom and being out on her own. Bo seems just fine as a lost toy and wouldn't let another day be wasted collecting dust on the antique store shelves and took finding happiness into her own weathered, porcelain hands, with her staff to guide her.

I truly loved the symbolism behind Bo's character as someone who bounces back and celebrates "life" despite their circumstance and makes the best of it, something I always try to inspire on my journey with Crohn's disease. Woody and Bo have such great chemistry and having them reunite is so bittersweet, and like many of us when faced with tough decisions we come to a point where we realize sometimes love may or may not be enough when it comes to pursuing our own happiness.

What Didn't Work For Me (It seems just me)

There were a handful of new characters and storylines in this one, some we could have possibly even done without.

Uggh. Please don't come for me when I say I didn't instantly love Duke Kaboom. I'm a big Keanu Reeves fan dating back to wishing I was trapped on that bomb-rigged bus back in "Speed" but I didn't see all the hype around this new character. He was good, but I think everyone's been swooning over the actor himself because I couldn't actually make the connection or find an attachment. However, the storyline about his own kid was pretty funny and quite clever when you think about the expectations little ones have of their action figures when watching them in commercials. 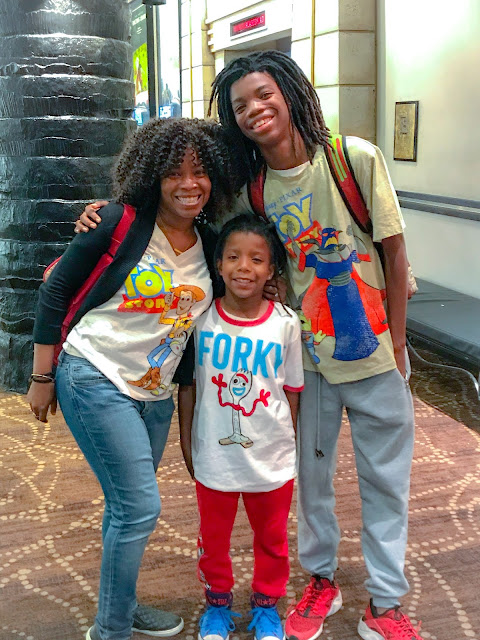 The success of the Toy Story films has been the character development over the years, they've been embedded in our childhoods and re-introduced to our children in a way that has had us all emotionally tied to their journey. Personally, I've always felt that Pixars range of movies from Cars to the Incredibles, Monsters Inc and of course Toy Story can always lend themselves to sequels and even spin-off series. Can't you see newcomers Ducky and Bunny in a hilarious one of their own?

Ya'll better stop playing! I've seen folks question whether this is really the end, the real end and you know what? if it's not you'll be right alongside the rest of us grabbing your popcorn and kleenex for the next one! Toy Story 4 is in theaters today, go see it a few times.
Posted by Dellah at 6:04 PM