Frozen 2: An Empowering Disney Princess Sequel that Shows Boys its Ok to Have Real Feelings 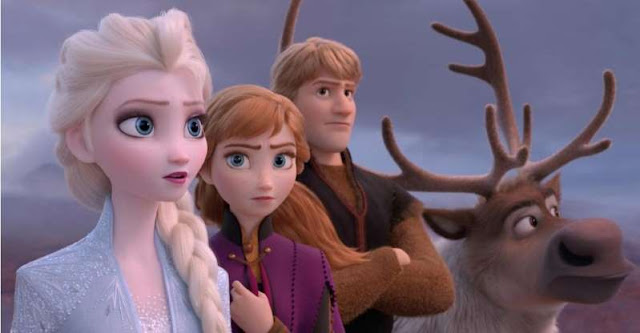 When Disney's Frozen hit DVD five years ago, I had no idea that the animated movie would be repeatedly played as often as it would be by our then threenager son. Tristan was absolutely obsessed with all of the layers that made the record-breaking movie so wildly popular in the theaters: beautifully engaging scenes, catchy hit songs, and a great storyline with lots of laughs. We'd both done a teaser trailer reaction video together for Disney's sequel, Frozen 2 and regardless of it being a "princess" movie, my tween son has been counting down for it to hit theaters this Friday, November 22nd.

I'm still in complete disbelief that I  was blessed with the opportunity to walk the red carpet and attend the world premiere of Frozen 2 during my stay in Burbank California for The Geekly Retreat. The movie takes us on a visually stunning adventure alongside two fiercely determined sisters who follow a voice and their gut to understand their past. It's definitely a more complex storyline with some darker themes but there were some beautiful takeaways on owning and expressing feelings that boys can learn from.

Why was Elsa born with magical powers? The answer is calling her and threatening her kingdom. Together with Anna, Kristoff, Olaf and Sven, she'll set out on a dangerous but remarkable journey. In “Frozen,” Elsa feared her powers were too much for the world. In “Frozen 2,” she must hope they are enough. From the Academy Award®-winning team—directors Jennifer Lee and Chris Buck, producer Peter Del Vecho and songwriters Kristen Anderson-Lopez and Robert Lopez—and featuring the voices of Idina Menzel, Kristen Bell, Jonathan Groff and Josh Gad, Walt Disney Animation Studios’ “Frozen 2” opens in U.S. theaters on Nov. 22, 2019.

There's no shortage of movies that tout storylines of female empowerment but as a mom of young men I do think it's a rarity to find ones that encourage boys to easily express their feelings. Chivalry will not die with our two sons who've learned from their daddy to give up their seats and hold doors open for women and the elderly, win awards for empathy amongst their peers in school, willingly still hold my hand and hug me in public {yep, even my 14 year old} and randomly tell me "I love you mommy" several times a day.
This fall I think during their flag football experience they were truly impressed by the girls that hit the field who could run as fast and throw as far, if not further than they could and they thought it was awesome! Where stereotypes have our boys believing that they have to be rough and tough cool guys, I'm hoping they leave theaters understanding it's ok to have deeper, bigger feelings and that there's nothing wrong with showing them.

Kristoff, played by Tony-winning actor Jonathan Groff is planning to tell Anna (Kristen Bell) that he wants to spend the rest of his life with her but she's all caught up and distracted by concerns for her sister Elsa (Idina Menzel) who's setting off to find the origin of her powers.
There's a battle scene where Kristoff saves Anna and he doesn't jump in like the typical heroic dudes we always see in movies that swear the princess needs him to fix everything. Instead, he looks at her and says ‘I’m here, what do you need?” ........ say whaaaat?!
I loved that moment so much because it really showed the true level of respect that he has for her, to trust that she can handle the situation and to assure her that he's got her back.

During the Frozen 2 press conference actress, Rachel Evan Woods chimes in to say "It's just really profound and I think people are going to be excited as to how the men are represented, he's Prince sincere, not Prince Charming" and the cast all agreed that this was their little contribution in the war against toxic masculinity. 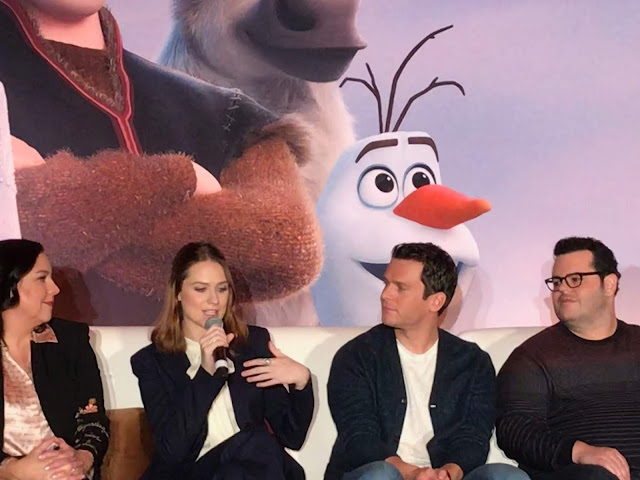 Music is always a great tool to help people get their thoughts across, especially when it comes to crooning over that love of our life. Don't pretend like you don't remember the stacks of mixtapes you made back in the day with hearts scribbled all over them somewhere!
During the junket, Kristen Bell admits that where they went wrong with the first Frozen was that someone as vocally talented as Groff was unable to showcase his talents. We've all come to love the popular chart-topping ballads like "Let it Go" that allow little girls to belt out their emotions but Frozen fans are going to get such a kick out off Kristoff singing "Lost in the Woods" a heartfelt song with an 80's retro vibe.
Bridge:
But I’ll waitFor a sign (For a sign)That I’m your path‘Cause you are mine (You are mine)Until thenI’m lost in the woods........
We're so used to seeing princesses losing themselves in despair over a guy, it's kind of fun and really sweet to see the reverse with the male character intensely in love and feeling sad and confused. At one point in the midst of singing, his wise reindeer buddy Sven tells Kristoff, “Your feelings are real. Feel what you feel. Let your guard down and let your feelings out.”  It's such a subtle yet special moment I'm hoping that audiences really pick up on when they see it.