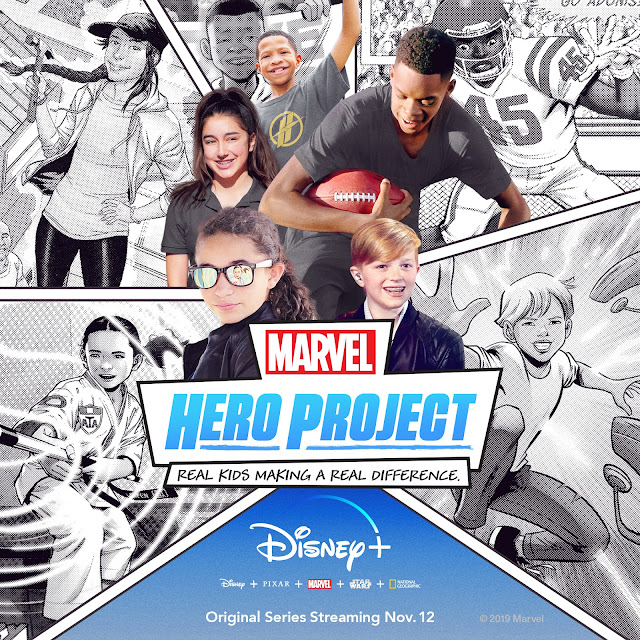 We may all sit back and ooh & ahh at the incredible powers of our favorite Marvel comic book heroes as they unfold in million-dollar CGI effects on the big screen, but there are everyday heroes among us in impressively passionate children who are suiting up to make the world a better place!

Grab your kleenex because once you watch and read about the inspiring story of 14-year-old Football player Adonis and all of the extraordinary kids featured in the upcoming 20 episodes of The Marvel Hero Project, you'll undoubtedly end up a hot, ugly-crying mess.

During our visit to Disney Studios, while attending the Geekly Retreat for entertainment writers, we had the opportunity to enjoy an early screening of episode 103 - The Unstoppable Adonis from the new Disney Plus original with an introduction from their VP of non-fiction content.


ABOUT THE MARVEL HERO PROJECT

The series, produced by Marvel New Media in partnership with MaggieVision Productions, reveals the remarkable, positive change several young heroes are making in their own communities. These young heroes have dedicated their lives to selfless acts of bravery and kindness, and now, Marvel celebrates them as the true Super Heroes they are. 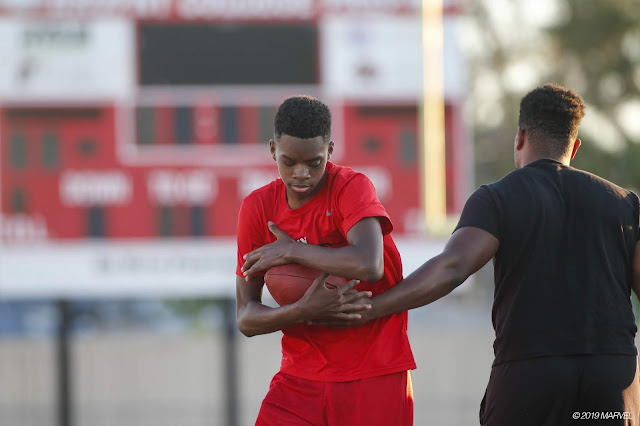 There's something to be said for an unstoppable and determined force of nature like Adonis who despite his loss of vision has inspired not only peers with vision disabilities but his community and people all over the nation.

Once I got back to New York from the retreat, I knew I had to show my boys the video of the superstar athlete that went viral. The appeal of his story wasn't solely because it showcased his undoubted skills as a superstar football player but because he’s a true testament to what it means to keep pushing, to persevere despite it all!


Can you imagine just one day out of the blue, spending time with your family at the pool and suddenly losing your eyesight? At just 5 years old, Adonis realized after splashing around in the water that his vision was extremely blurry, to the point where he ended up undergoing eye surgery that very same day. Diagnosed with Glaucoma (an eye condition that progresses to permanent blindness) he underwent 12 surgeries before the age of ten in hopes to regain his vision.
" I can't see anything and that includes limits for myself".  Adonis hasn't let his disability block him from reaching his fullest potential and thanks to his supportive family of athletes who love a bit of friendly competition, he's driven to succeed. There came a point where Adonis felt he was falling behind in school work and was missing out on life so he courageously decided to not go through with any more surgeries. Imaginably tough for his mom, she felt like he was giving up on fixing this part of him but the teen with dreams of joining the NFL was determined to prove that he wasn't broken and insisted he play on his school's football team. 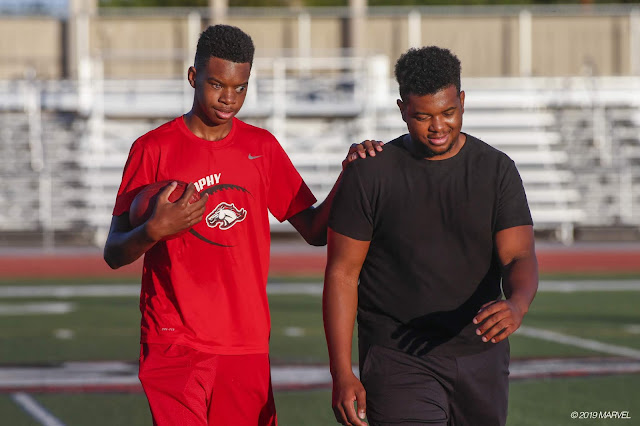 Adonis's mom admits " When I see him in his uniform, for those 3 hours it's like his uniform is his cape" and yet now beaming with pride she acknowledged that for 2 years she didn't support him enough. There was a really honest moment where she shared that they'd gone all of that time without taking a single family photo because they didn't want to document that tough moment in their lives. My heart hurt for them because clearly, they were having a tough time dealing with their son's diagnosis, deep down all they wanted was for him to get ready for the next surgery. Realizing now that the choice was a mistake she has since vowed to be his biggest cheerleader and not stand in his way.

As a mama to boys who play NFL flag football, I know his parents must have been petrified because it's hard enough to witness your child being tackled on the field, let alone a child who can't actually see the obstacles in front of him. Parents tend to forget how resilient kids are and project our own fears and issues onto our kids because we want nothing more than to protect them. Diagnosed with a chronic illness as a teen I can relate to having my own parents set limitations on my capabilities because they feared I’d push myself too hard. Over the years I’ve learned that the only way you can overcome a diagnosis is by not letting it define who you are.

Marvel's team compared Adonis to comic book superhero Daredevil who was blinded during a childhood accident involving radioactive material. Although both young men could no longer see, with their other senses heightened they'd been given special abilities to accomplish incredible things. Where Adonis isn't able to connect with people in a superficial way based on appearances, through the vulnerability of losing his sight he's able to connect with people on a much deeper level and it's had such a positive effect on others.

Blind to limitations and with the realization that he has to work twice as hard as his teammates, as a high school freshman Adonis suits up and gives his all every day to be the best running back he can be. Waking up at 4 am to practice, appearing in every game and making 3 touchdowns in the season all while maintaining good grades. I'm grown and I have hard time getting up at 6am, he's truly such an awesome role model for everyone. 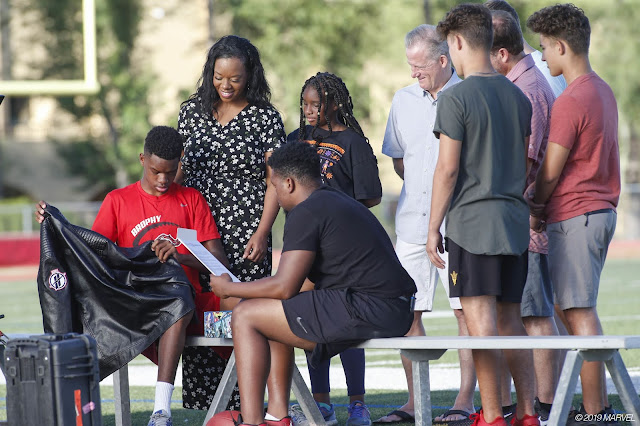 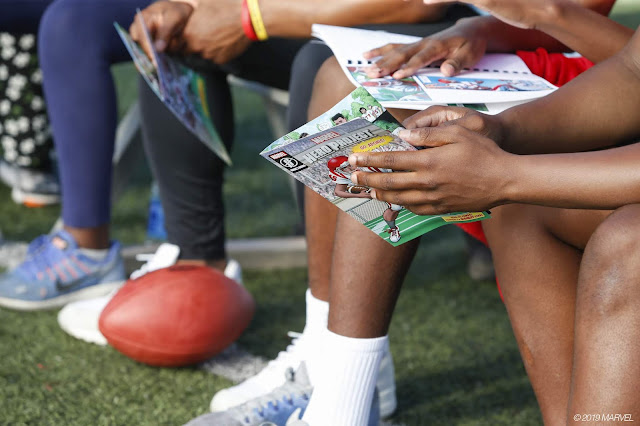 The Marvel Hero project is an amazing way to celebrate Adonis and the 19 other children who've accomplished greatness and inspire so many. As members of an elite club, these real-life superheroes receive a custom Avenger style jacket, will have their stories immortalized in their very own Marvel Comic book and in their honor (Marvel, for their first time even created one in braille just for Adonis) a generous donation in the amount of $10,000 is donated to a charitable organization they support. There's even some pretty dang cool surprises they receive,  that they are all so deserving of.

Grab a seat, check out The Unstoppable Adonis comic book and watch this eye-opening show on Disney + every Friday as a family.  It's an honest look at kids from different walks of life who are making a difference despite their circumstances. Kids of all ages should be able to walk away from watching these stories thinking "If they can do it, I can do it too!
Posted by Dellah at 8:20 AM

Email ThisBlogThis!Share to TwitterShare to FacebookShare to Pinterest
Labels: A Cause for Jubilation, Disney, Disney Plus, Entertainment, Reviews, The Geekly Retreat, The Marvel Hero Project