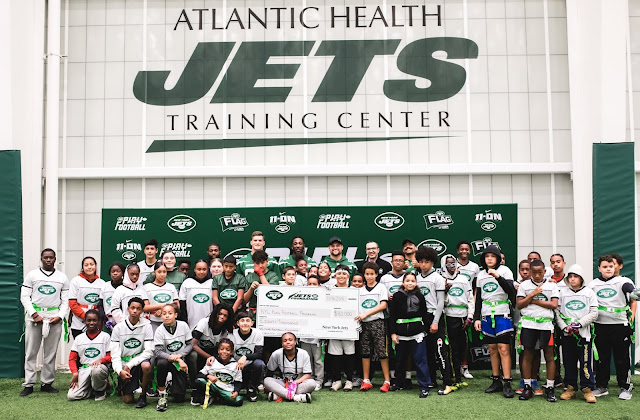 Disclosure: We attended the clinic as media but please note this event is normally not attended by parents of the players.  All photos of the players at the Jets training center have been provided courtesy of the NFL.

Gen Z kids just aren't moving their bodies enough these days and as parents and former athletes, Mike and I are advocates for encouraging a healthy balance between screentime, unplugged fun & physical play. Once Track and field ended for the summer with the city parks program I started researching other ways to keep our active boys busy while saving a coin or two. Let's be honest all of our kid's interests and activities can quickly add up, especially if you have more than one child. If you're looking for a free or inexpensive program promoting physical activity, we'd really recommend that you look into offerings from your local parks programs and recreation centers.

Through the NYC Parks and Recreation NFL Flag Football programs boys and girls ages 5-17 can join participate in the instructional series which includes fundamental instructional drills & strategies and all equipment is provided: Official NFL league jerseys, flags, and footballs. The NYC Parks Flag Football League is open for girls and boys ages 9 to 17 for league play, which includes Borough, City and Regional championships before heading to Florida for the NFL Flag Championships during the Pro Bowl. 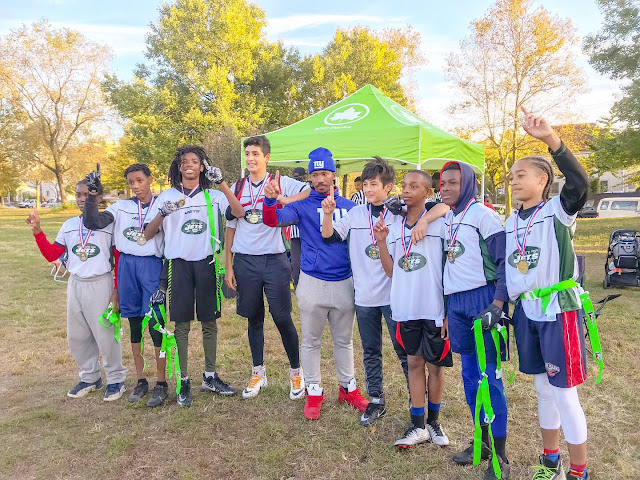 Our kids had been asking to join a tackle football team for the longest and we felt that joining a flag football team would be a great way to ease them into playing the sport without the concerning physical contact.

To say that Tristan and CJ have enjoyed the program is an understatement, to be honest, our entire family has looked forward to them hitting the field every weekend and cheering on all of the youth players. An added bonus is the way the program has brought the community together, we've met so many great families and our kids have all made lots of new friends that we all look forward to seeing. You can take a look at our experience on my Dellasjubilation page on Instagram.
Our teen and his teammates (ages 13-14) played really hard this season and with only one practice a week and a committed coach they were named Queens Borough Champions after 7 straight wins. The chemistry between the boys of the Kissena A team has been so impressive to watch and we all couldn't be more proud of the work they've put in from the start. 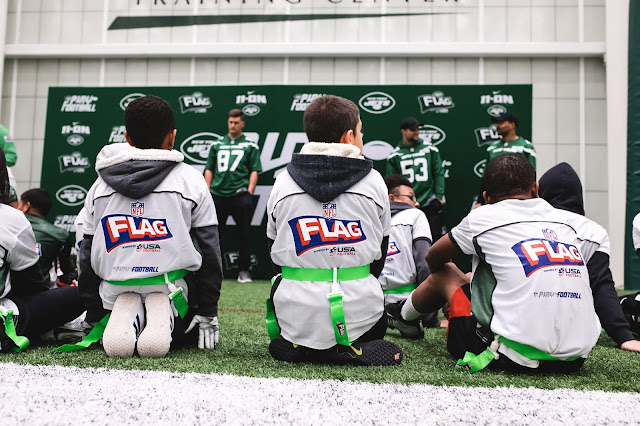 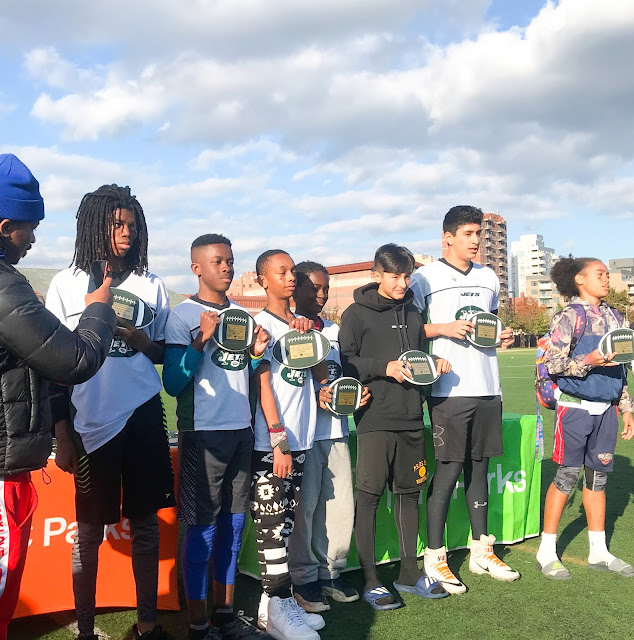 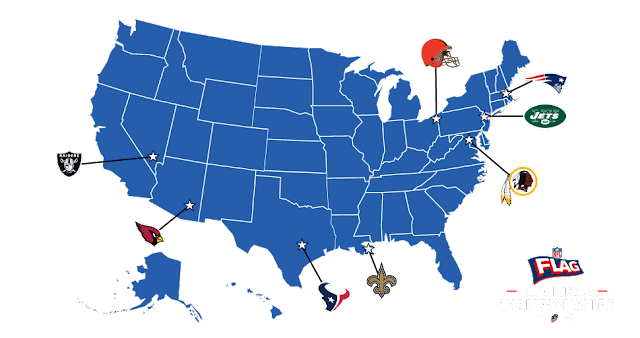 It was a really special moment and a boost of morale for our kids who came in 2nd place at the City games the weekend prior. We'd never lost before and the Brooklyn team the kids played against were definitely fast on their feet, tough talkers who didn't seem to believe in good sportsmanship. You definitely can't win them all but our boys didn't let the loss keep them down for too long and if anything we all agreed that they needed to be humbled to stay hungry! We know there's going to be some tough competition ahead, with our team facing off against other kids from across the nation at the regional games. 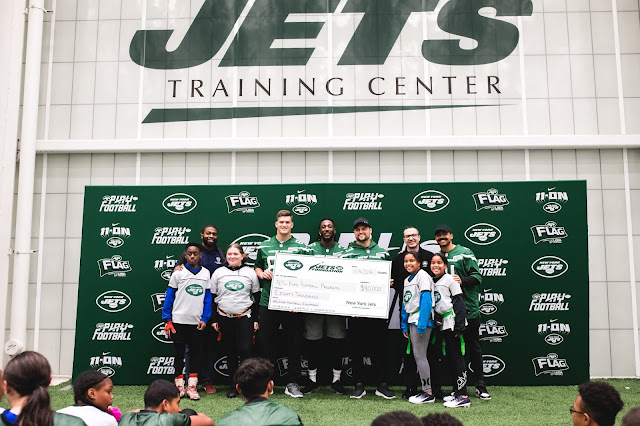 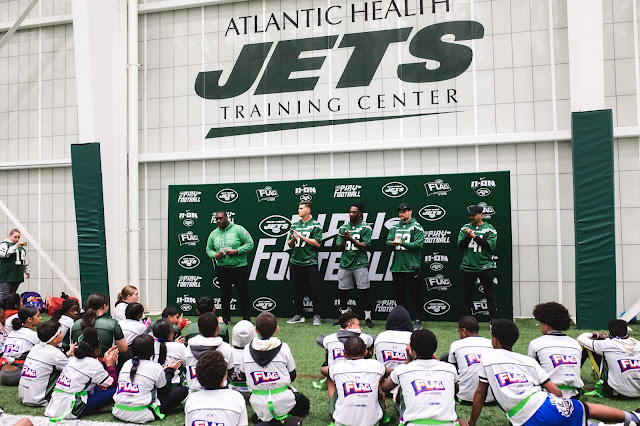 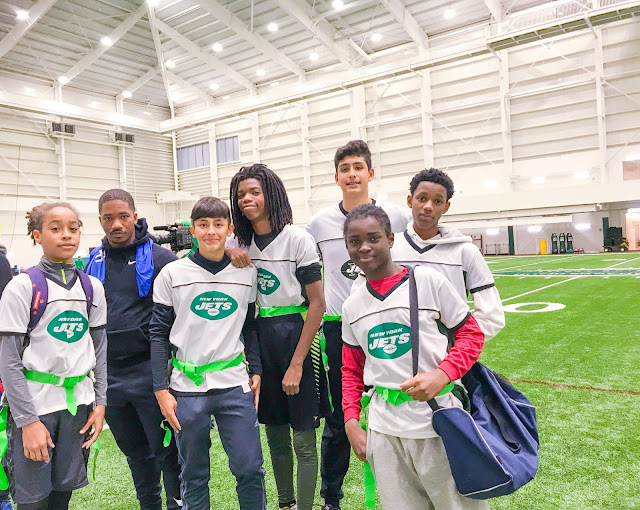 The partnership with both programs aims to bring the community closer together by providing over 3,000 youths from the five boroughs of New York City the chance to play flag football at no cost. Teams representing the NYC Police Athletic League are led by volunteer NYPD officers, who coach teams near their local precincts. 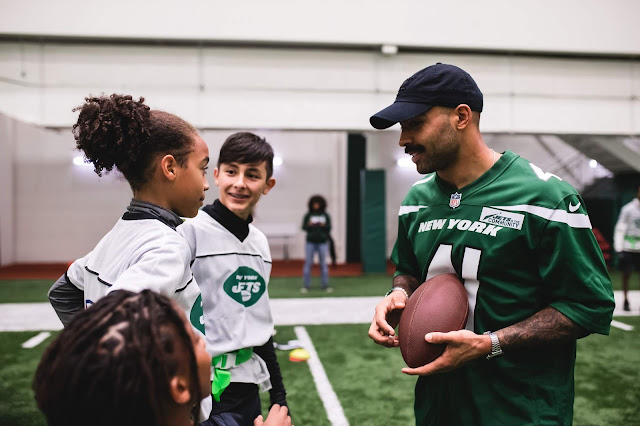 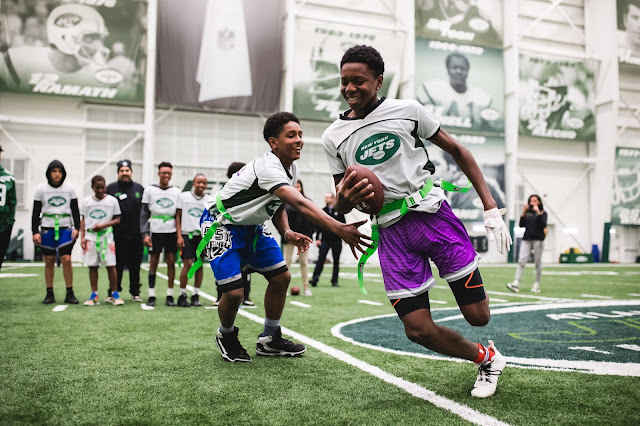 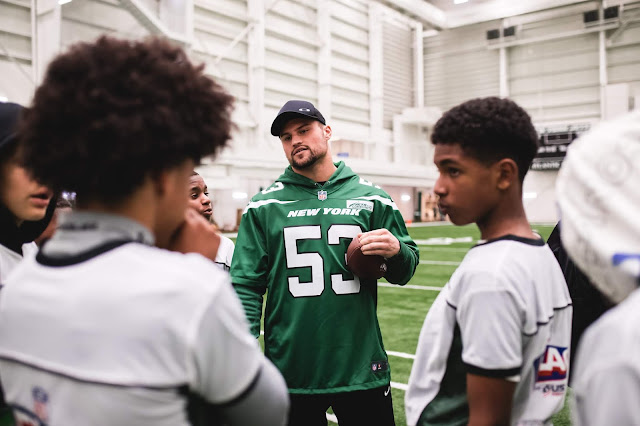 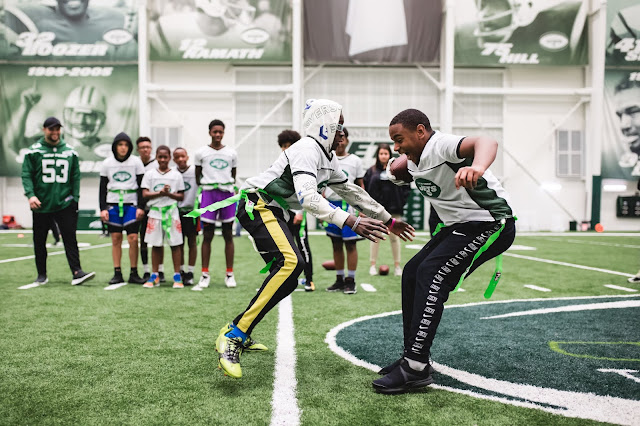 During the clinic, the Jets players lead football activities and taught the flag players proper technique and tips. We emphasized how important it was for them to pay attention because that knowledge would definitely prove to be helpful when all four teams attend the upcoming NFL FLAG Regional Tournament on Saturday, November 16th at Belleville High School in Belleville, NJ. Graciously the Jets will cover all transportation and tournament fees for the four teams and you better believe my family and I will be out there cheering hard for our Queens team! 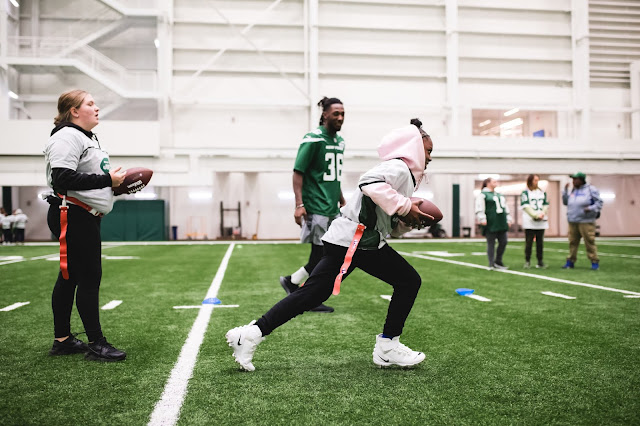 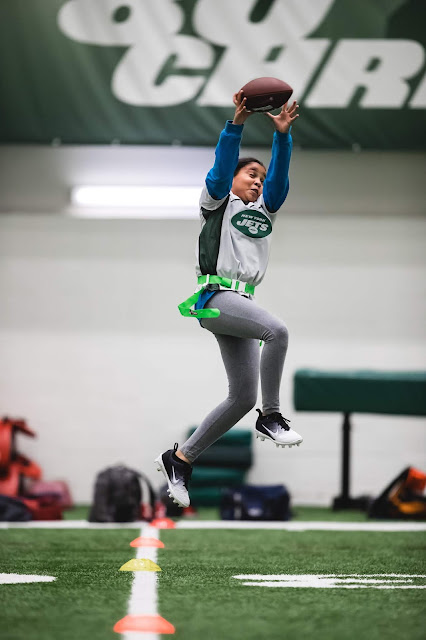 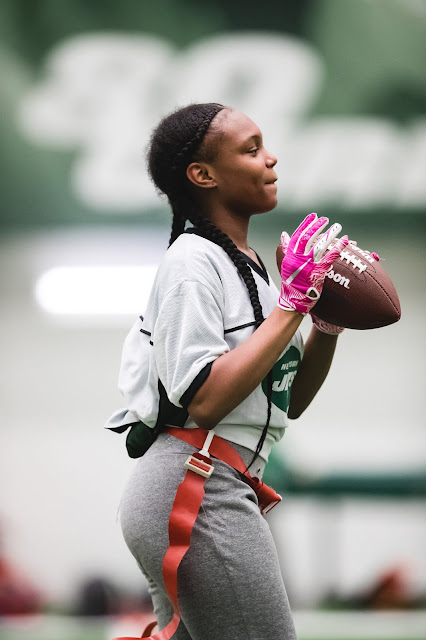 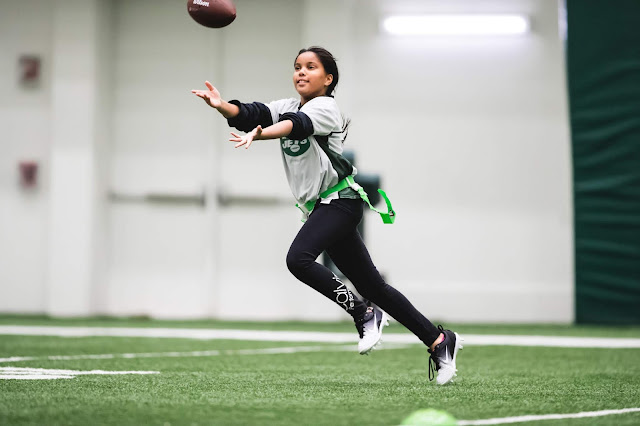 I'd be lying if I said, I wasn't extremely excited to see the young ladies showing off how skilled they are as flag football players. 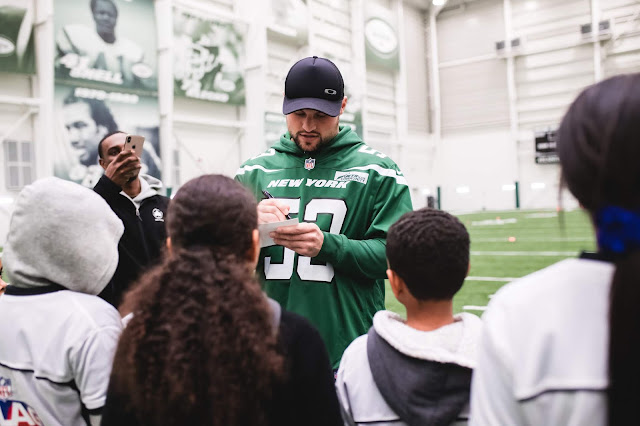 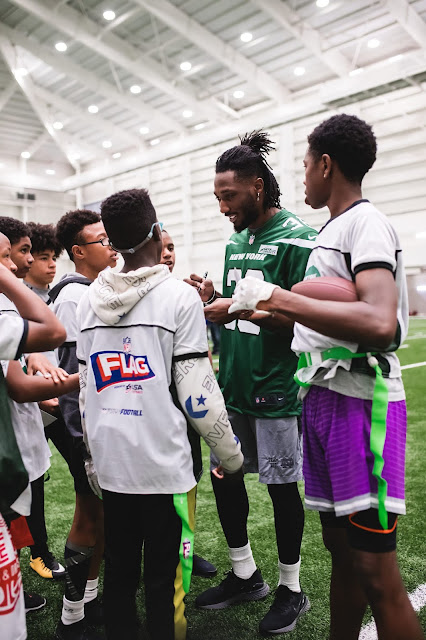 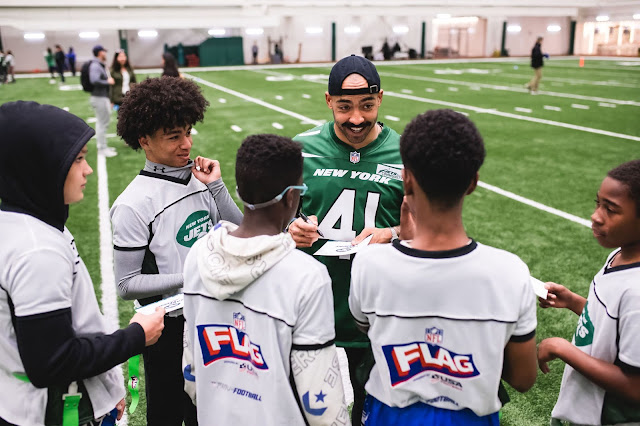 Before the scrimmage, the kids grabbed autographs from the players and then we headed for dinner. You can never go wrong with grilled cheese, chicken tenders, mac and cheese, mini burgers and fries. 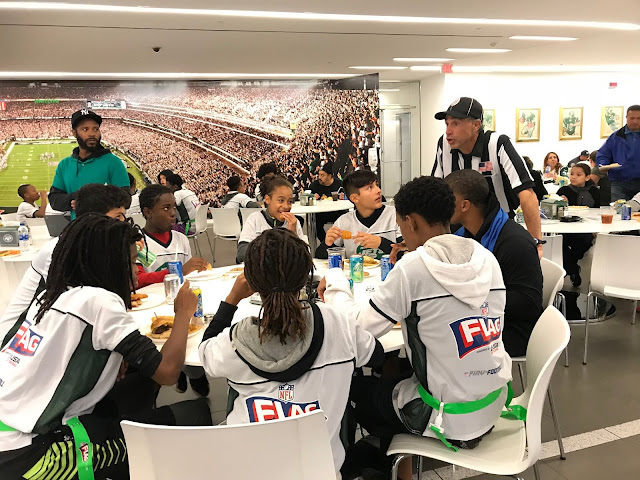 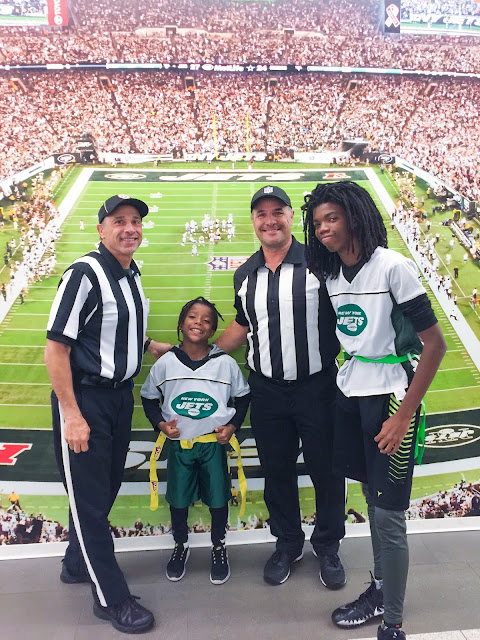 Some of the referees who've had years of experience were on hand to answer any questions that the coaches or players may have had about the game. One of the calls they said they most often make during a game is when a player jumps on the field, players must remember that one foot always has to be on the ground! 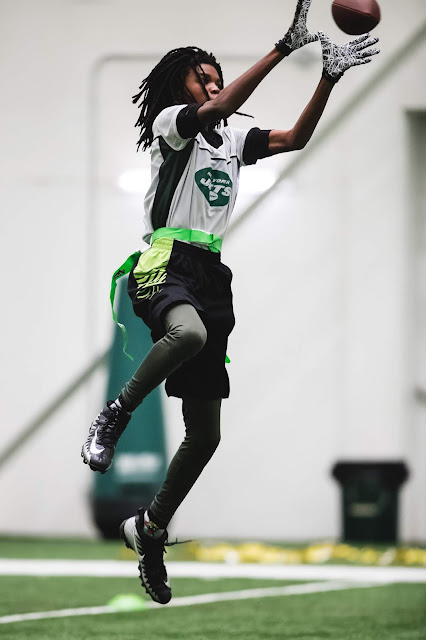 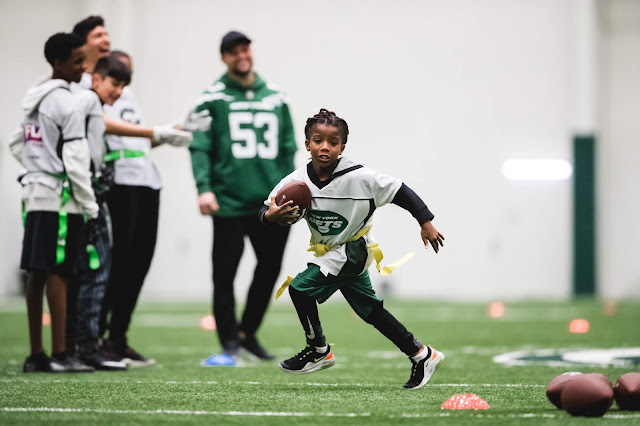 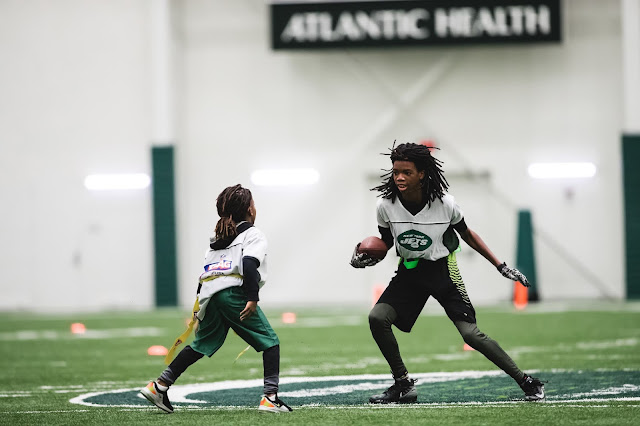 When we rode back to NY I asked each of my boys what they thought of their clinic and scrimmage experience at the training facility. From their faces, I think they were still in disbelief at what had just happened. Going into this I don't think any of our families really knew what to expect other than one practice and one game a week.


Our teen CJ thought "It was cool to play on a 100-yard field alongside real players, catching their throws and running their routes."

Our tween, Tristan lucked out and got to tag along as a guest, he even had the chance to do some of the drills. "It was really fun playing with the actual NFL players and to toss the ball around with the big boys. I was really surprised when I actually caught my brother's flag. I think I surprised him too!" 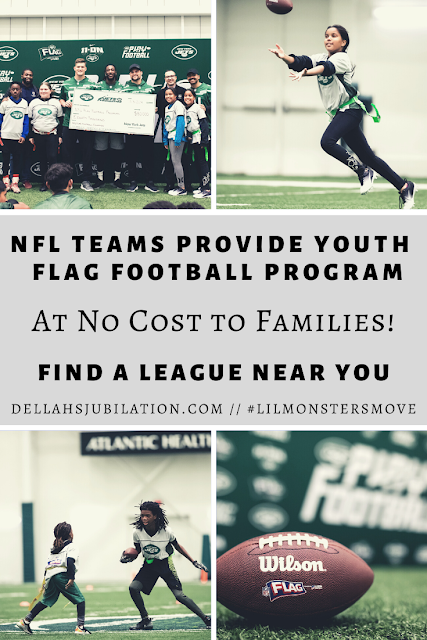 The evening was certainly one I know these four teams will never forget and I'm so glad that as a mom and a writer that I've been able to document their experience and share its success with families in our community. If you're reading this, please help spread the word about this amazing program and if you're looking to sign a child up, find a league .

Do your children play any league sports in your community?
Tell us about it in the comments below.
Posted by Dellah at 8:21 AM