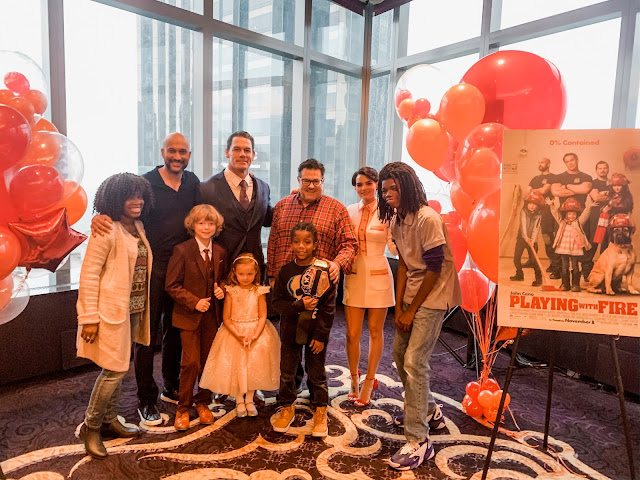 What's tougher, being a smokejumper battling dangerous wildfires, a wrestling superstar throwing down in the ring in front of thousands of audiences daily or juggling three witty, high energy kids who keep you on your toes? I'm sure if you ask the adult cast of Paramount Pics' new film Playing with Fire, they'd say that babysitting is no easy feat, even if they're just acting. This month NYC family bloggers and content creators had the chance to attend the Premiere of the family-friendly new film and our mini reporters were handed the mic to ask all the important questions to the cast and Director on everything from what inspires them, owning up to their mistakes & their fave hilarious moments in the movie. 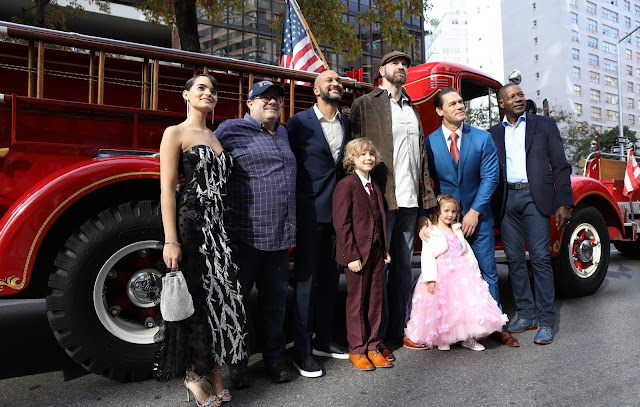 When straight-laced fire superintendent Jake Carson (John Cena) and his elite team of expert firefighters (Keegan-Michael Key, John Leguizamo and Tyler Mane) come to the rescue of three siblings (Brianna Hildebrand, Christian Convery and Finley Rose Slater) in the path of an encroaching wildfire, they quickly realize that no amount of training could prepare them for their most challenging job yet – babysitters. Unable to locate the children’s parents, the firefighters have their lives, jobs and even their fire depot turned upside down and quickly learn that kids – much like fires –are wild and unpredictable.

Kid Reporter: This question could be for any of you. It's, did any past experiences help you with the role?

Director, Andy Fickman: I will say the experience that helped me and hopefully we were able to pass it along to everybody is we got to spend time with the real smoke jumpers in Reading, California. And, everything that you see in the movie, the look of the movie and the wardrobe, everything was helped by the actual smokejumpers. And so, that was the thing that inspired me the most.

Keegan-Michael Key: my two best friends from childhood growing up both became firefighters. And, when we were young we used to ride our bikes to fires and stand behind fire trucks. And, my best friend used to watch and he'd say "I'm going to do that one day. I'm going to be that or a fighter pilot" So, he did do it. So, I've been able to watch a lot of fires. So, I get the experience of what it's like when they tell me about their job and what it's like to be in the mask and seeing the smoke and how hot it really is inside the room you know, so I use a little bit of that.

Christian Convery:  A few past experiences that help me with this role are well, I've learned how to act and a bit of improv because of Keegan and everyone else on this show.

Everyone thought it was pretty funny when John Cena jumped in to admit that Christian probably didn't learn that from him. Yet if you follow John's career, it's really impressive how he's become this entertainer in the ring to full-fledged movie star on the big screen and hit television shows like 'Are You Smarter than a 5th grader' on Nickelodeon.


Brianna Hildebrand:  I have some older brothers, so, I guess the experience of being a younger sibling helped me sort of wrap my mind around what it would be like to be an older sister

Kid Reporter:  So, in the movie when the soap and the suds get everywhere the little boy owned up to his mistake. So any, so this question can be for any of you guys--have any of you owned up to like a very big mistake?


Keegan-Michael Key:  Owning up to mistakes, I mean, I feel like I do it every day. It's very good to hold yourself accountable for your actions because then you can learn from them. And also, it helps wipe the slate clean every day if you--if you really do it. And, the only key to it really, I think, is that you just have to really be sincere.  It always feels better if you really apologize from a very genuine place. 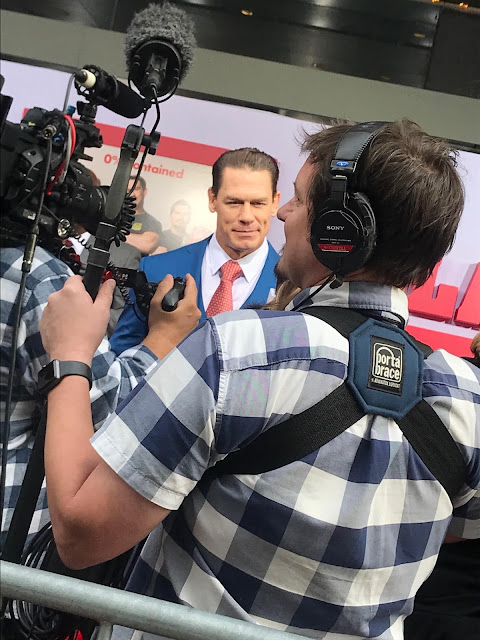 Kid Reporter:  This could go to all of you. what was the hardest scene to make in the movie?

John Cena:  So, for me it's when Keegan is trying to chastise Brianna's character because I had to keep a straight face through that. When he keeps getting up he's like, nope. And then sits back down and stands back up again.  And, he did one take where it was eight minutes long. And, I was supposed to just stand there like I was being a parent and she was being scolded. And he's incredibly funny. So, he made me laugh so many, so many, so many times. So, it wasn't like oh, this is hard work. But it was impossible for me to keep a straight face, which was most of the time when he was doing his thing and I had to stand there and look like I was important and tough and be like. So, that was--that was difficult. 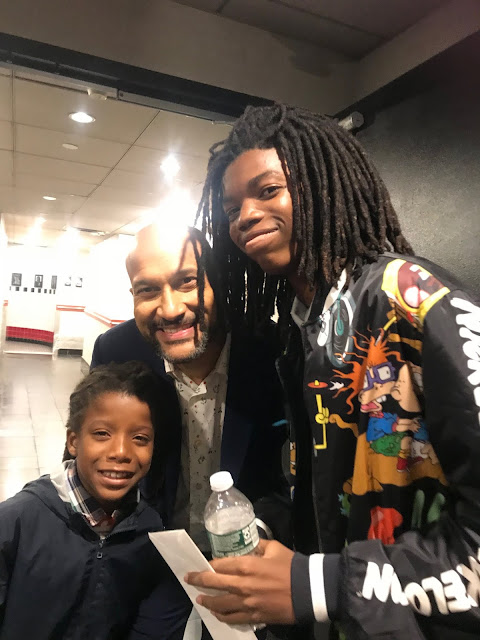 If you're familiar with Keegan Michael Key's work than you know he's a super talented actor,  with hilarious comedic timing, having worked Comedy Central and some of his more kid-friendly projects have been The 2019 Disney's Lion King, Disney Pixar's Toy Story 4, Hotel Transylvania lll.

Imagine how funny it was for my teen CJ to take his little brother to use the bathroom before the NYC Premiere only to look to his left and see that Keegan Michael Key was right next to him. I'm just proud that I raised my boys with enough sense that waited until after they'd all gone to the bathroom before asking him for a picture, unlike the man that tapped him on the shoulder before he could even zip up.

Kid Reporter:  Hi. My name is Abraham. This is for John Cena.

Kid Reporter:  What made you switch from like fighting and action to and movies and stuff?

John Cena:  I'm going to answer your question with a question--when's your birthday? What day?

So, I really enjoy storytelling and I enjoy entertaining audiences and having fun. Movies is a different way to do that. It's weird cause there's 10,000 people either cheering you on or telling you you stink. But it's still a fun way to tell stories and the WWE WrestleMania type moments like we had yesterday at the premiere we can watch the movie in front of a theater full of folks.

So, I'm not done. I haven't had my last match yet. I hope to have more matches in the future just not as many matches. Because when you sign up for a movie with folks like this and you tell the director like "hey, on weekends can I go get my face bashed in?" He just says no. So, you kind of got to do one thing or the other.

I'm not--I'm not done quite yet. I haven't--I haven't had my last match quite yet. 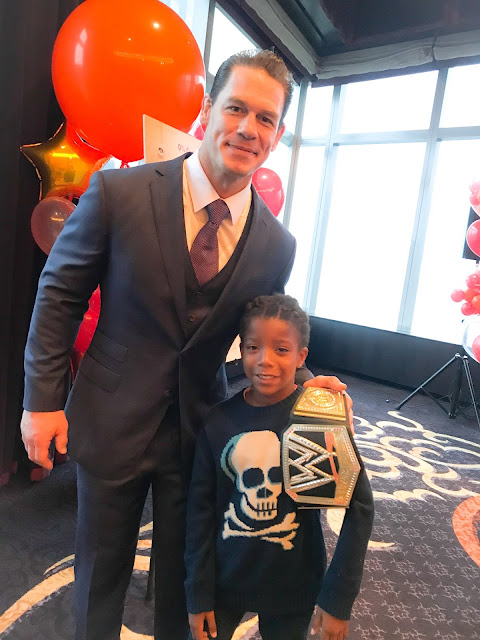 If you've been following us hon this space all these years then you know that I'm a huge WWE Mom fan and my three guys have and I have all grown up watching the incredibly athletic superstars like John Cena for ages. Where I do love him in all these family-friendly movies, I made sure that while we took our pics with the cast to tell him that he had to break that 16x World Championship Tie with Ric Flair, so he's got to get back in the ring. When he took his solo pic with Tristan he said it was definitely something he'd take into consideration, and we'll be tuned in and cheering him on! 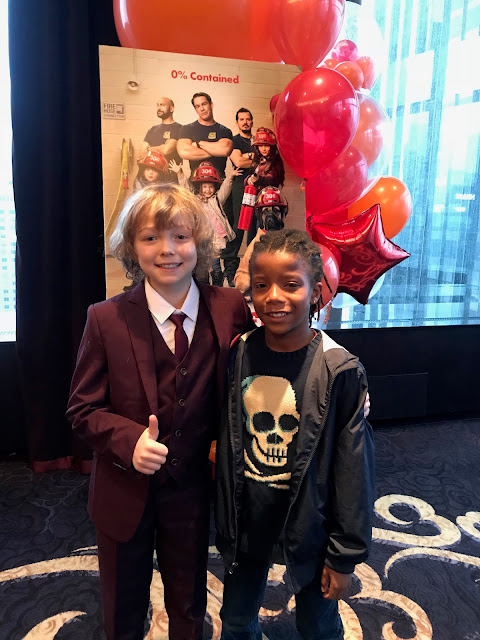 My boys have both always expressed an interest in acting, so I love when they have the opportunity to sit down and chat with the talented actors and actresses about their experiences on and off the set because although a lot of the scenes and special effects look like a ton of fun, there's certainly a lot of work that gets put into making all the cool moments happen. One scene in particular that Tristan thought was awesome was when the fire station flooded with bubbles, so he knew exactly what he wanted to ask.


Tristan:This could be for all of you. The scene with the bubbles in the fire station looked like a lot of fun. What was your favorite part of making the movie and why?

Christian Convery:  So, they rigged me up to a harness and then they attach me to a rope on the ceiling. And then, they would pull ropes and I would just start flying around at--for a very long time and it would be insane. And I would be screaming really loudly.

Keegan-Michael Key:  And, you were just hanging there on the harness?

Christian Convery: And I was like ah, the whole time.

Keehan-Michael Key:  And did they fly you around?

Keegan-Michael Key:  So, there was like six or seven guys, right?

Director Andy Fickman:  To be fair to Christian, once we got him up there and he was there for such a long time I forgot and went and got a sandwich, right?  And so, I just left the room and he was swinging around.

But I will say there is something interesting about that scene too with all the bubbles that involved all of them, as fun as it looked that was maybe the hardest scene to film because those bubbles in a very tight space. You had to have safety mats that were below and when you put that much bubble in a space the air isn't as fun as you would want it to be and they had bubbles.

And so, fire was dangerous. I think filming our bubble scenes was more dangerous than our fire scenes cause we had to open up our doors immediately to get the air out. That was probably our hardest scene to film. 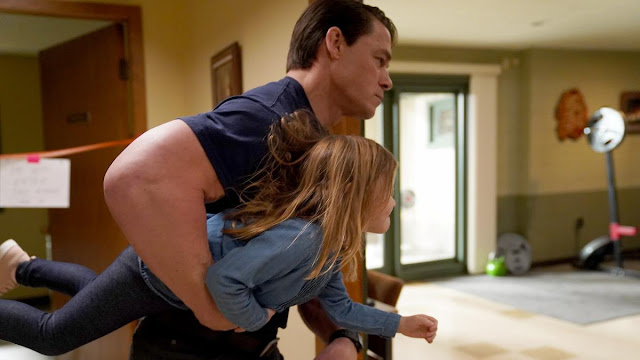 Before the interviews wrapped one final kid reporter got to ask their question which received the most hilarious response from the youngest, most adorable actor, Miss Finley Rose Slater.  There were some really sweet and hysterical moments between her and John.


Kid Reporter:  Of this movie? What's their favorite part of the movie?
Andy Fickman:  Hm, Finley, what's your favorite part in the movie?
Finley Rose Slater:  When John Cena made pooping in the woods.
John Cena:  Thank you so much for your kind words. I will never forget this.

Playing with Fire is now playing in theaters as of today Friday, Nov. 8th. If you're looking for a good family movie this weekend despite some of the critical reviews out there, it's entertaining for kids of all ages. Some of the special effects may seem a bit dangerous (the fires, shooting nail guns & falling objects) and the poop humor may feel over the top but to its core, it's really a sweet story that will guarantee laughs.

What we did enjoy was that the cast had great chemistry, there wasn't any foul language or adult undertones and although the storyline may not be anything new and out of the box, it's still really enjoyable. Let us know if you see it and what you thought!