Can't get to the Disney Parks? Bring the magic home with over 20 themed games for kids of all ages If only a bit of pixie dust could save us all from the coronavirus pandemic! It was announced earlier this month that Disney Parks would close its doors across the globe in hopes to flatten the curve and slow down the widely spread virus. This news has been such a bummer seeing as we were finally planning to take our youngest to Disney World in the fall to celebrate his 10th birthday and first visit.  On our last episode of the Brown Side of Disney my co-hosts and I talked about the park closings and ultimately think a lot of folks underestimated the seriousness of all this news and then realized things were really about to hit the fan once the house of mouse shut things down.

Since we're all practicing social distancing and can't visit the parks, bring the magic of Disney straight to your home and pass the time away with over 20 Disney themed games. As a believer in finding the good in everyday moments big and small despite our circumstance, we hope amidst the challenges ahead you look at this moment in time as a way to unplug to connect with your kids.


Disclosure: This post contains affiliate links to which we'll earn a few coins (a small percentage of sales) should you make a purchase based upon our recommendations. Thanks bunches in advance, bunker down like us with a few fun games & wash those hands. Stay safe all! 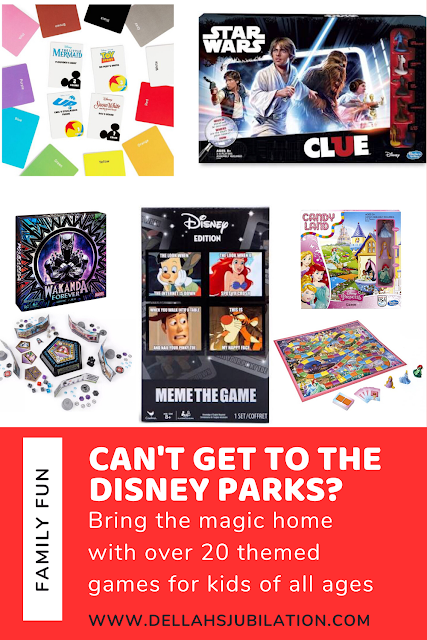 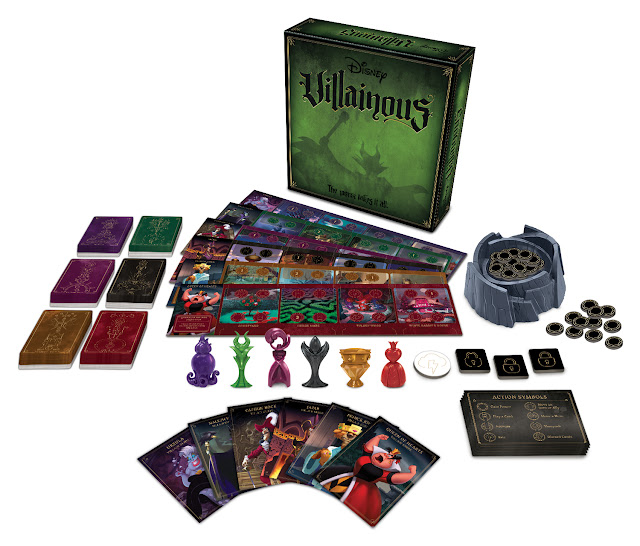 Ravensburger Disney Villainous  (Wonderforge)
If you're into strategy games then you'll love playing Disney Villainous for hours just like my two boys do with the family.  It's so good to be bad and for all the fans of the misunderstood yet cool villains, this is the game for you! Choose from 6 iconic Disney Villains - each with their own sinister objectives & goals. Disney Villainous comes with Captain Hook, Maleficent, Jafar, Ursula (my favorite) Queen of Hearts, and Prince John. The Fate Decks allow you to mess with your opponents' objectives and also feature your favorite protagonists like Aladdin, Peter Pan, Ariel, and more! Ages 10+

Be prepared to have a good time with expansion packs featuring Scar, the Evil Queen and Cruella. Disney Villainous can be played as a standalone game or with the other games in the Villainous line: Evil Comes Prepared, Wicked To The Core, and Perfectly Wretched. 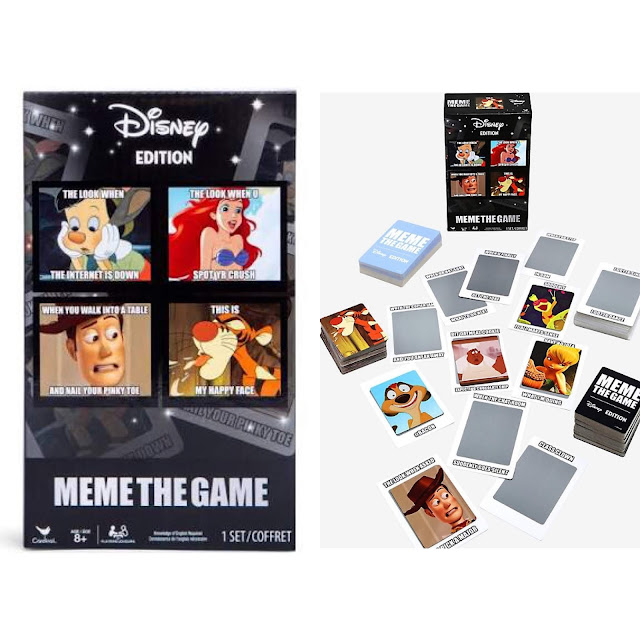 The Disney Meme game (Cardinal)
We could all use a few laughs these days and there's nothing like a hilarious meme to lift your spirits! Have you seen the few memes floating around on social media since it was announced that the park would close? 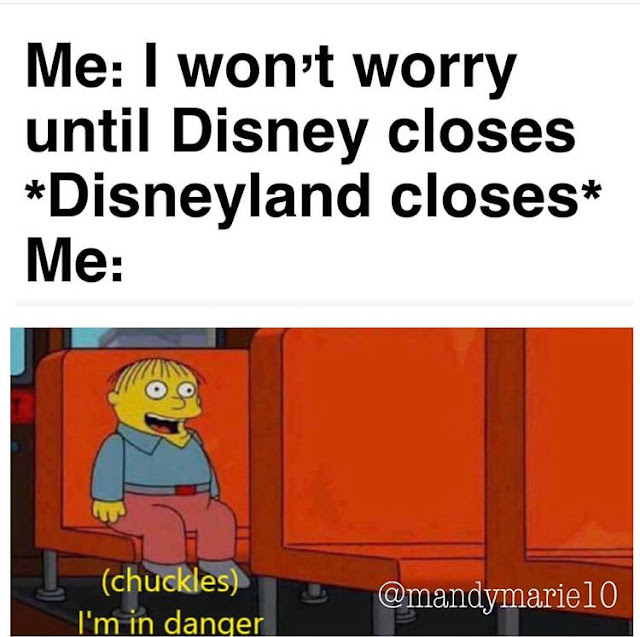 Personally, we all love this game because it's something quick that we can squeeze in between dismissal and bedtime during the week and lots of laughs with our friends and family over the weekend and during parties. It was a hit with kids of all ages at Tristan's 9th birthday party last year. Unlike the original meme game, this version is friendlier for kids and lets us pair our favorite Disney scene with the meme that fits the best. The other game players will judge who has the funniest matchups, and whoever has the most wins! You can also find it here at Box Lunch 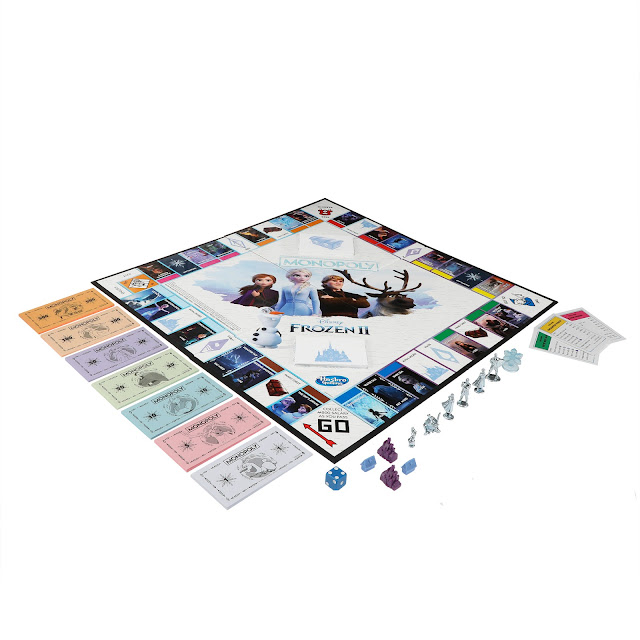 Monopoly Game: Disney Frozen 2 Edition  (Monopoly)
We're that family with a dozen or more different versions of monopoly, so when I spotted this new version of the classic game in the media lounge during the Frozen 2 press junket I was so excited to see it. Who's calling dibs on the Olaf token? Journey through Arendelle with Anna and Else while moving across scenes inspired by the movie. When players land on a Snowflake space or draw a certain Chance card, they can place the Snowflake token on any scene they own. Whoever lands there pays double rent. Ages 8+ 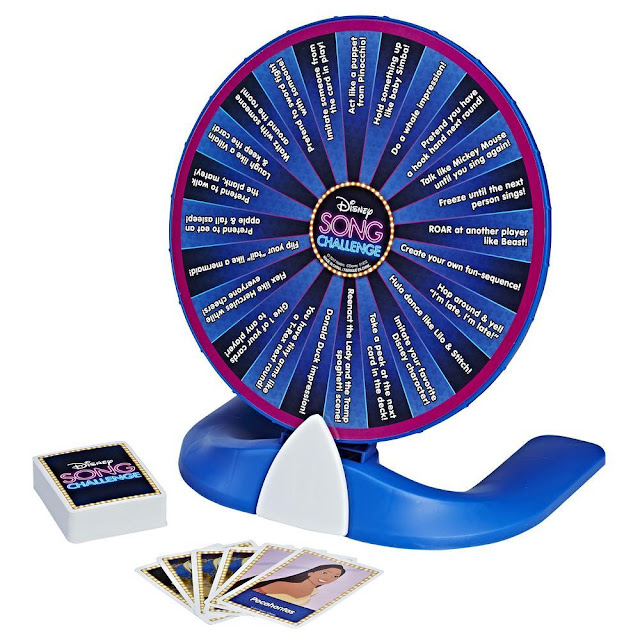 Disney Song Challenge (Hasbro)
It's time to test your song skills to see who's the ultimate Disney Movie and TV fan. My hubby Mike is one of those folks who know all the words to the songs from the classic movies, so he was a critical judge of the Aladdin and Lion King live-action remakes. In the Disney Song Challenge game, a card is flipped over from the deck, revealing a Disney movie or TV show. 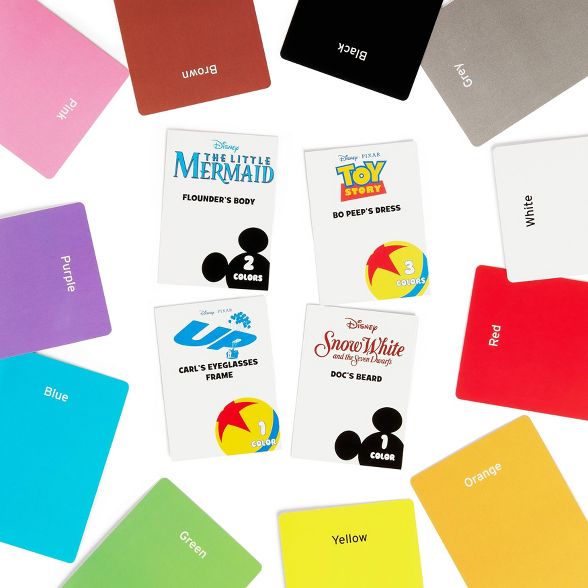 Disney Colorbrain  (Big Potato)
Do you have a keen eye for color and a great memory? Can you remember the color of Princess Elsa's eyes in frozen? How about the color of Woody’s vest in Toy Story? In this Disney board game, all the questions can be answered with one (or more) of the 11 color cards in your hand. From Peter pan to Pumba, there are 250 questions from over 20 Disney films. Put down the right color and wait for the other teams to slip up. The first team to score ten points are the winners! Ages 8+ 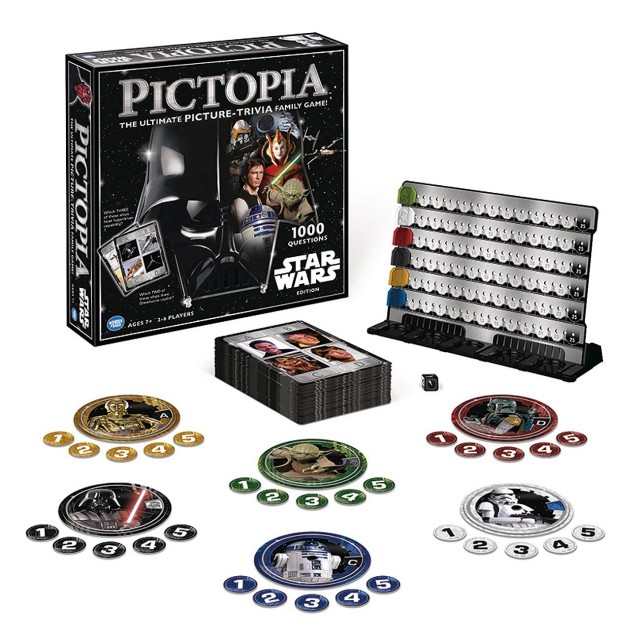 Make family game time epic! Prove whether you are a Padawan or Jedi Master when your knowledge of STAR WARS is tested with 1,000 questions on the iconic planets, ships, villains, and heroes from a galaxy far, far away.. It's a game of teamwork with a competitive edge! Sometimes you'll work together and other times answer alone, but you'll wager every time! How much you risk depends on how well you know your STAR WARS trivia! Feel the Force questions add an exciting twist by revealing how much you sense about other players! Ages 7+ 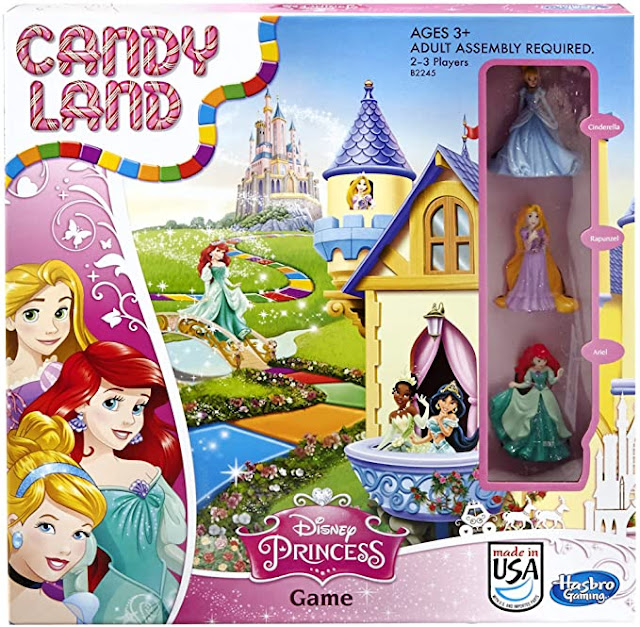 Take a dazzling journey through 8 magical lands in the Candy Land Disney Princess Edition game! You'll pick your favorite Disney Princess - Cinderella, Rapunzel, or Ariel - and start drawing colorful cards that guide her along the rainbow path. Who will be the first to reach the castle? If it's you, you win! Disney. Ages 3+ 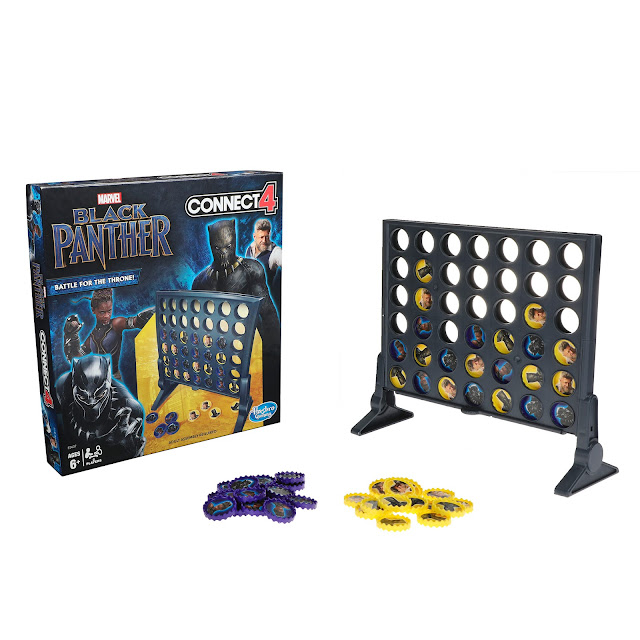 Connect 4 Black Panther Edition (Hasbro)
Wakanda forever! I almost wish this was a real kingdom where we'd greet everyone without actually touching each other and likely not spread deadly viruses. Get exciting Connect 4 disc-dropping gameplay with discs featuring the images of T'Challa, Shuri, Killmonger, and Ulysses Klaue. Stack the 4 discs vertically, line them up side-to-side, or go on the diagonal. The first player to get 4 of the same color in a row, wins! Ages 6+  (in case it doesn't restock on Amazon, find it here at Walmart too) 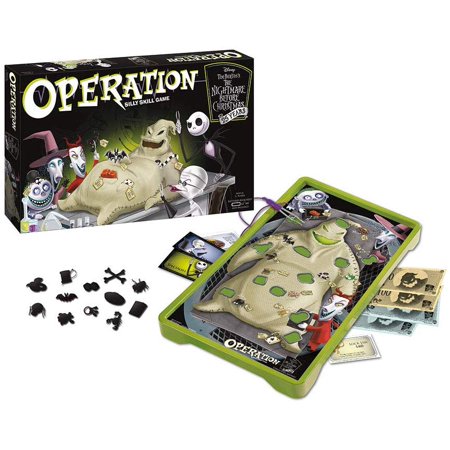 The Nightmare Before Christmas Operation (USAopoly)
The classic game of Operation is now a collectors addition perfect for The Nightmare Before Christmas fans. Be the surgeon and remove custom Funatomy parts from the patient, Oogie Boogie. The game features custom removable parts which include a snake, spider, dice, worms, needle & thread, roulette wheel, card deck, keys, bones, scorpion, bat and bug. Ages 6+ 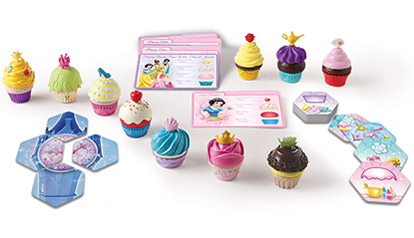 Let's try not to stress eat all the snacks in the house and distract ourselves with a cupcake party with all the Disney Princesses! Collect the ingredients on the recipe cards, and make as many cupcakes as you can! When the clock strikes, count up your cupcakes – it’s time for the party! Ages 3+ 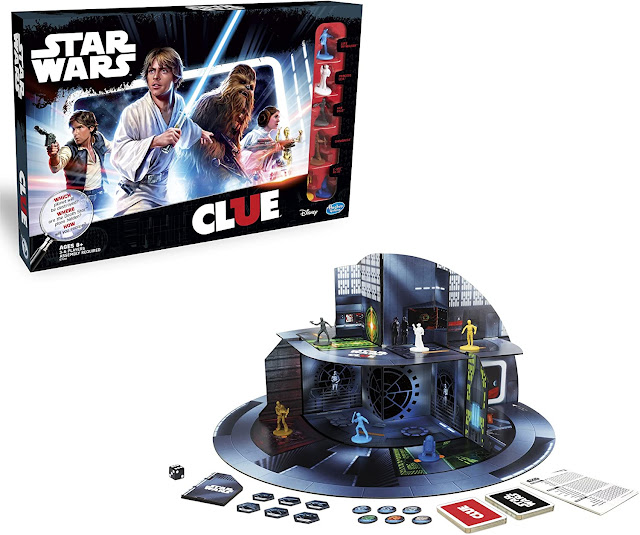 Hasbro Clue Game: Star Wars Edition  (Hasbro)
In this Star Wars edition of the popular "who done it" Clue game, players move about the gameboard as one of their favorite Star Wars characters on an important mission to foil Darth Vader's plans, and to save the Galaxy from destruction. Play as Luke, Leia, Han, Chewbacca, R2-D2, or C-3PO. Ages 8+ 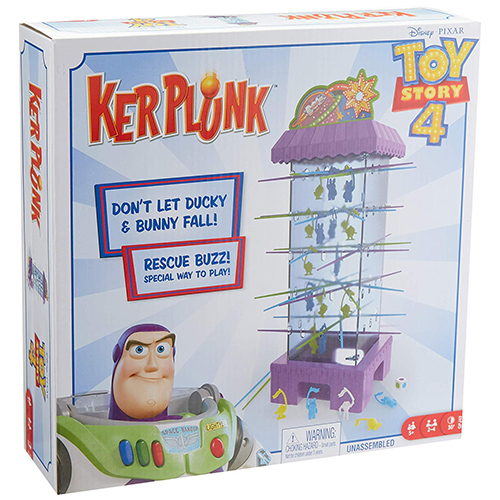 Disney Pixar Toy Story 4 Kerplunk Game (Mattel)
I'm going to be honest, we've never played Kerplunk but it sounds like a game my youngest would get a kick out of! Featuring Disney Pixar Toy Story 4 is the classic kids’ game you know, now with a fun theme that Toy Story fans will love! Featuring fan-favorite characters Ducky and Bunny along with a carnival-themed game unit, this easy-to-learn kids game is sure to be a hit.

To play, create a lattice of sticks inside the translucent, carnival-themed tower. Then, drop the Ducky and Bunny character pieces inside where the web of sticks will hold them. Each player takes a turn rolling the die and pulling out a colorful stick -- whichever color the die indicates. Be careful not to let your favorite characters fall -- the player who drops the fewest Ducky and Bunny character pieces is the winner! When you’re ready to shake things up, grab the Buzz Lightyear character piece and try the super-fun special game mode. Ages 3+


Wakanda Forever  (Spin Master Games)
Are you ready to take the throne as a slew of villains threaten Wakanda? As the five tribes of Wakanda, players battle together to keep the country safe. Roll the dice to collect Vibranium to help defeat a lineup of villains and earn points as threats are eliminated. Win the game with the most points and cement your legacy as the Black Panther. Ages 10+

A pretty fun list of games right? Which of these do you already own or are you planning to add to your collection? 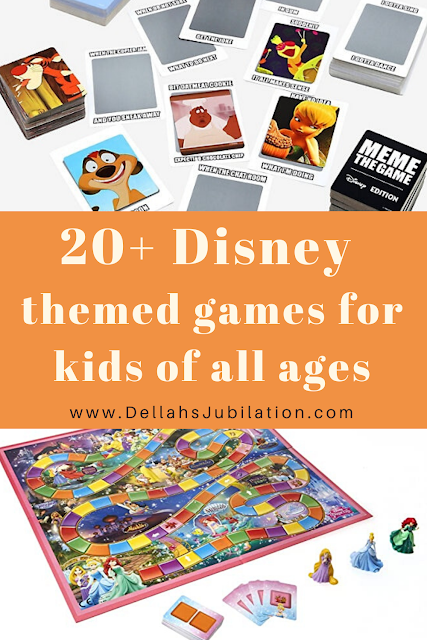 Email ThisBlogThis!Share to TwitterShare to FacebookShare to Pinterest
Labels: Board Games, Disney, games, Must Haves for Lil' Monsters