Don't You Dare Close Your Eye's! 4 Reasons Disney's Aladdin is a Must See + Video Review and Giveaway #Aladdin 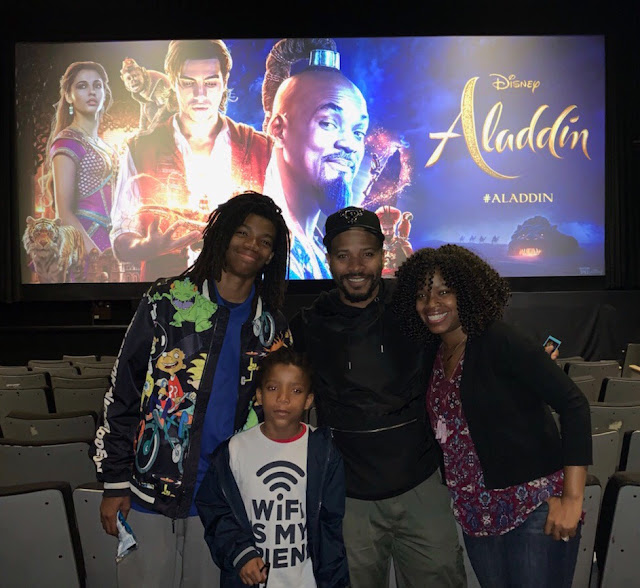 Disclosure: This post is sponsored by Jakks Pacific whose sponsoring this giveaway and our annual holiday toy drive. Thank you for reading & supporting the brands who help us support families in need.

Growing up I remember watching Disney’s Aladdin in the living room of our 2 bedroom apartment in Queens, we'd pull off all the seat cushions from the couches and spread each of them across the floor. My sissy and I would pretend that we were hopping from one rooftop to the next like we were being chased through the city of Agrabah. I'm surprised we didn't ruin the dang VHS ribbon after the number of times we played that tape. We'd belt out all of those catchy songs at the top of our lungs and crack up at Robin Williams in his larger than life role as the Genie.

Fast forward to today and us 80’s and 90’s babies have been waiting patiently for the release in theaters, some of us with a little skepticism after seeing what felt like subpar trailers and having high expectations of Disney’s latest live-action update. Would it be masterfully produced, and visually engaging? It's freaking Disney of course and Guy Ritchie was at the helm in the director's seat giving his touch of fast action and grit, while the legendary Alan Menken would undoubtedly have us singing along on a new adventure, with 2 brand new songs.

Aladdin is one of those movies that quintessentially represents our childhood and we knew there was no way with all the cinematic magic in the world that Disney could fail us, or could they?

I'll say this, Don’t You Dare close your eyes on this movie or underestimate Will Smith in his role as the Genie! We screened the film with our 2 boys and it brought a whole new world to light in a way that was true to the nostalgiac storyline yet updated with a few modern twists that were meant to appeal to a Gen Z audience. 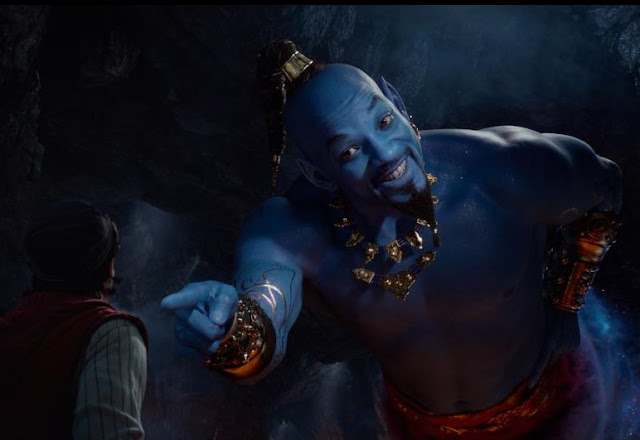 I figured let's jump right in and start with Will Smith because most of the media buzz surrounded his smurfy blue CGI character that left most folks questioning if he could even come close to bringing the Genie to life in the same humorous yet charismatic way that the legendary Robin Williams had. Now look, we all know that no one could ever compare to the original character and that's ok because a multi-faceted actor like Will Smith can handle the challenge! The rapper turned actor put his own spin on it with classic quick rhymes while bringing some Fresh Prince flavor to Agrabah. Within the first few moments of the movie, he is already singing and overall he did an exceptional job: he brought the charm and the swagger and of course, made us laugh and I think Robin Williams would truly be proud. 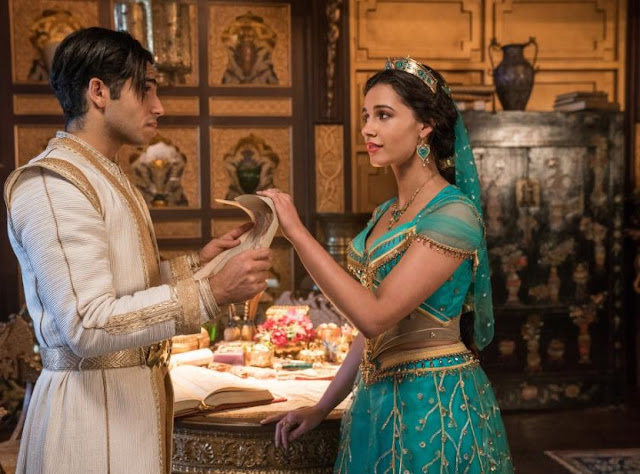 When Mike and I started dating, I'd get such a kick out of him excitedly reciting all the lines from Disney’s Aladdin, I mean he knows practically every single word and he'd sing along with the cutest smile and youthful enthusiasm. So cheesy! But he’s always reminded me of Aladdin, street smart and charming. You should have seen him, he was so hyped and I could feel him nudging me during certain parts, smiling when he approved. As cheesy as it is we were both singing " A Whole New World" and holding hands, even though I had Peabo Bryson and Regina Belle's version in my head.

The title may be Aladdin (Mena Massoud) but this story was just as much, about Princess Jasmine (Naomi Scott) who's character development is way more in-depth this time around. I don’t have daughters but it was so cute seeing the little girls in the theater dressed up like the independent princess who isn't scared to speak her mind. If you thought Princess Jasmine was sassy in the animated version, wait to you see how headstrong she is now. A standout moment was certainly Scott singing the new song "Speechless" which is this really climatic song that gives her a voice with it's empowering lyrics. Mena Massoud played the role of Aladdin like he was destined for the role, it suited him perfectly, showcased his charmed and athleticism. There was a great lesson surrounding his character and self-acceptance. 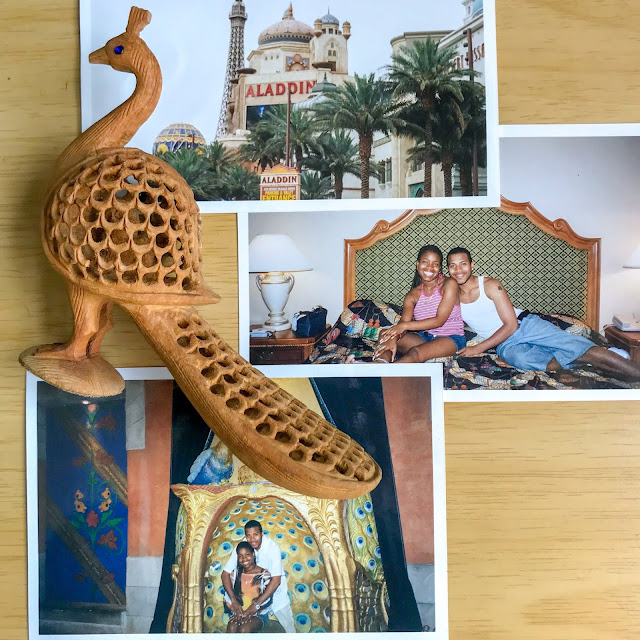 I'll never forget when Mike and I went on our first trip together with my family to Las Vegas nearly 16 years ago and we knew we absolutely wanted to stay at the Aladdin hotel. It’s unfortunately closed now, but it was such a fantastic hotel to stay at with a true Persian vibe. As you walked through the shops, it was like a desert passageway and on the hour there was a really cool indoor rain shower that we visited frequently. 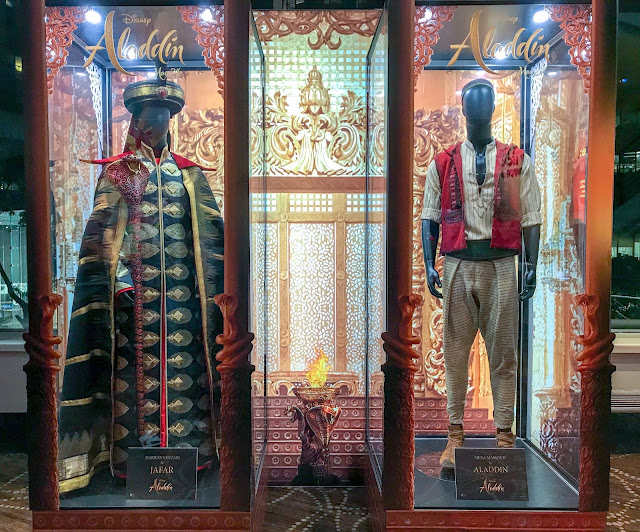 Once we took our seats I know like me, the crowd was looking forward to being whisked away to escape the day to day reality on a visual ride of our lives. When we received the invite to screen the movie it made no mention of us previewing it in 3D. Honestly, it must be the magic of Disney because normally I’d pass on the annoying plastic glasses to just see the plain version and avoid the headaches. Surprisingly not this time! I was fixated on every moment and was mesmerized by every scene. Watching the story unfold in 3D will leave you feeling like you’re trudging through sand dunes, dodging dangerous perils in the Cave of Wonder and singing along through starry skies on that magical carpet right alongside Aladdin and Jasmine. From the Marrakech walls draped with textured tapestries, to the vibrant marketplace filled with colorful fruits and jewel-toned accented jewels, the sets seemed to be so intricately designed.

Passing through the halls of the theater were full Jafar and Aladdin costumes that everyone stopped to take pics of. The emphasis on the details were incredible!

4. MUSIC & CHOREOGRAPHY
The greatness that is Alan Menken was remixed with a combination of modern music where hip hop/ pop meets Bollywood, leaving viewers tapping their feet to the beat. The choreography was really fun to watch and designed by Jamal Sims (Hair Spray and Step Up) and had a contemporized feel with break dancing featured in big numbers like "Prince Ali" and "Friend Like Me". In "One Jump Ahead" we really get a sense of the athleticism of the cast, with really impressive, fast-paced action sequences we all thought required a stunt double.

"Hands down the Best animated to Live - Action Disney Movie released to date"
Now at first when my teen CJ said this to me, I raised an eyebrow knowing how much he and Tristan truly enjoyed Mary Poppins Returns but then he clarified that he meant for those that were originally fully animated like Cinderella and The Jungle Book.

Overall it was wonderfully made and we left the theater beatboxing to the songs and searching for the soundtrack on our walk to the subway. Take a look at our family review video on Youtube (we let you know what didn't really work for us) and let us know why you loved the movie too! 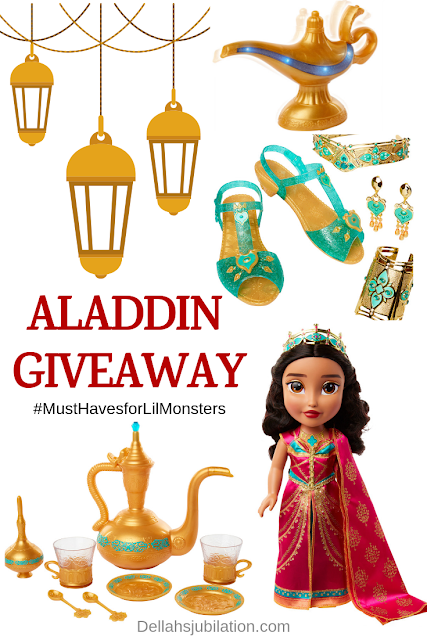 (1) lucky winner will receive an Aladdin themed prize bundle ( valued at $89.96) including 1 of each thanks to Jakks Pacific who is sponsoring this giveaway and our holiday toy drive!
Genie Lamp //  Deluxe Jasmine Accessory set
15" feature Jasmine Doll // Arabian Inspired tea set