The Magic is in the Details: Netflix's Musical 'Jingle Jangle: A Christmas Journey' is a Holiday Must Stream! 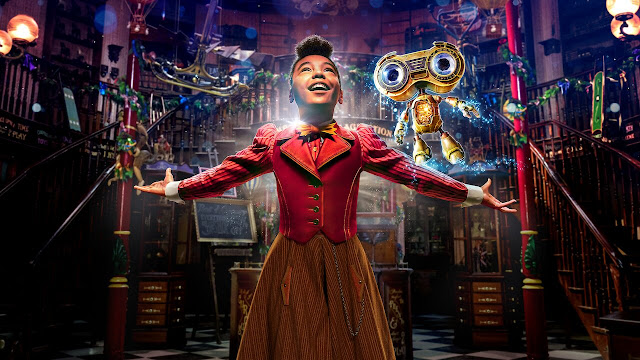 A lot has happened over the last few months and at this point, we could all use a moment to be whisked away on a whimsical journey that removes us from the harsh realities of the world. Even if it means for two hours of movie watching with our favorite people.
Netflix has been doing such an incredible job of creating engaging, original, diverse content and we had no doubt that their new musical 'Jingle Jangle: A Christmas Journey' would be a must-watch magical, holiday hit! 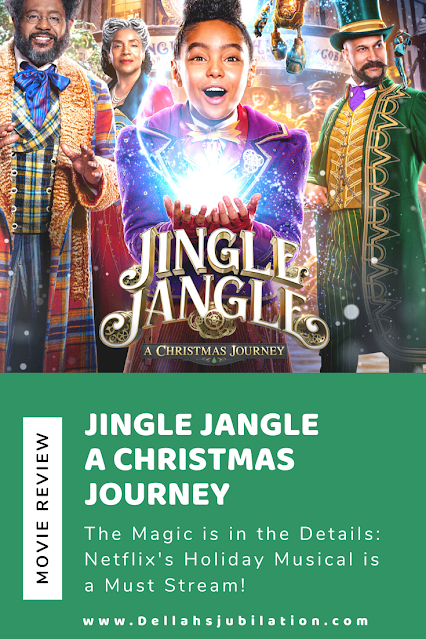 Here we are mid-November and folks have already started blasting their soulfully festive tunes and have put up their flocked and tinsel adorned Christmas trees to drown out the noise and change the crappy narrative of 2020.

20 years in the making and you'll be truly mesmerized by the imaginative story brought to life for Gen Z Kids, their millennial parents, and the generations before them, all thanks to the amazing duo, writer-director David E. Talbert and his partner in life and film production, wife Lyn Talbert.

Growing up, the only musicals with a mainly Black cast that I'd ever been exposed to were 'The Wiz', 'Carmen Jones', and my first Broadway play as a tween was 'Sarafina'. With the pandemic sadly shuttering the doors and turning the lights out on NYC's infamous theater district, our family is definitely among those who greatly miss the dazzling experience of watching elaborate stage performances.

It's certainly no easy feat to be able to bring all of the complex elements of a detailed musical production mixed with CGI animation together to create something so out of the box and as entertaining as 'Jingle Jangle". Originally developed to be a play, the Talbert's felt that the story would be better suited for film, and honestly, it was so well executed I'm hoping that they reconsider their decision and bring it to Broadway someday!

Although we were in the comfort of our own living room when we screened this, we were imagining seats in the mezzanine and vibrant, high energy dance numbers worthy of numerous standing ovations. Until then here are all our reasons why Jingle Jangle is going to be Netflix's must stream holiday classic. 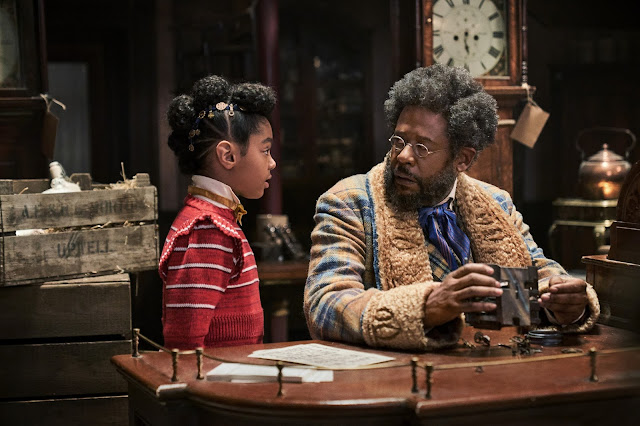 An Inclusive and Diverse Cast

Being able to see ourselves within the shows and performances we watch and stories we read will always be a big deal. Although it seems Hollywood has ignored this for decades, it's finally becoming more common for our Black and Brown kids today.
As part of Netflix's 'Representation Matters Collection', not only does Jingle Jangle creatively highlight the story of an innovative, beautiful Black family but it features a cast compromised mainly of talented Black actors.
When we first saw the trailer I instantly knew it was going to be a must-see with legendary actors like Oscar winner Forest Whitaker (older Jeronicus Jangles), Tony Award winner Anika Noni Rose (Jangle's daughter), and the iconic, Tony Award winner Phylicia Rashad (Grandmother) cast.
Ever since my kids ran into him in the restroom of The Playing with Fire premiere they've been fans of the hilarious, Emmy Award winner Keegan-Michael Key who plays the trusted apprentice (older Gustafson) and inevitable bad guy.
During our interviews with the director, producer, and cast, we're introduced to film new-comer Madalen Mills who plays Jangle's inspiring granddaughter Journey. For a fun dose of comic relief, we absolutely loved the scene-stealing character Ms. Johnston the mailwoman (played by Lisa Davina Phillip)  who crushed hard on Jangle and made her infectious, joyous presence known through soulful, larger than life songs that even include a trio of fun backup dancers with Victorian swag. 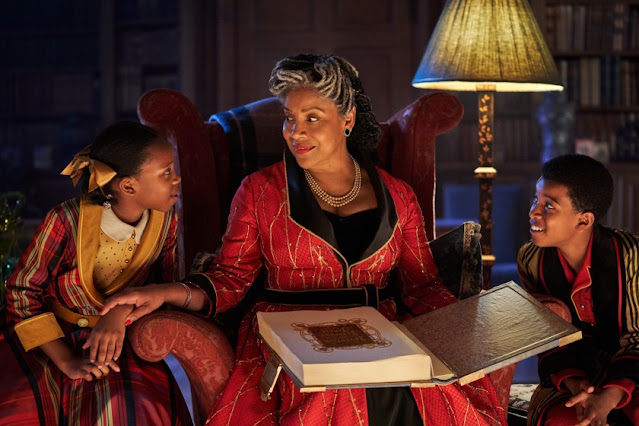 This film is an absolute gift wrapped in grandeur, eye-popping details, and charismatic characters. Honestly, the only one thing some folks may be turned off by is that it has a multitude of layers and may feel like there's too much going on but really it touches on a lot in all the best ways possible!
Phylicia Rashad kicks off the film alongside her two adorable grandchildren who are eager to hear a fresh new holiday story.  While opening up a book entitled "The Inventions of Jeronicus Jangle", beautiful 3D elements of animated gears spin and turn as we're introduced to the greatest inventor in all the land.
A mix between two of our household favorites Willy Wonka and Mr. Magorium, Jeronicus Jangus is an ambitious toymaker whose passion has always been to bring joy to all ages. You probably wouldn't know that there was a mathematical formula to derive at "the Square root of possible" until you stepped foot into his shop "Jangles and Things" filled with his extraordinary gadgets and gizmos. 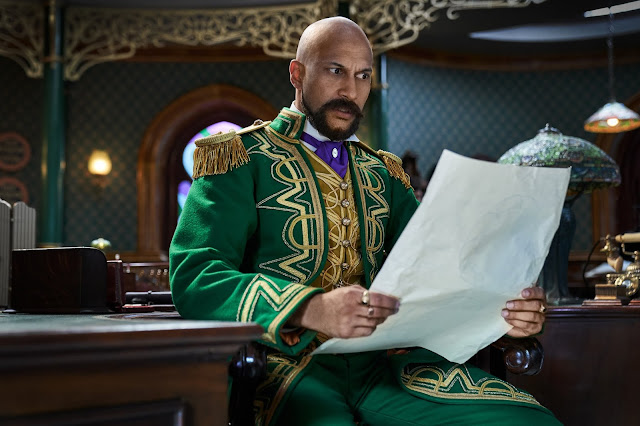 Sometimes life's moments can just seem to be too good to be true and you end up swindled by the people closest to you. Just when he's about to unveil his breakthrough creation, the toymakers' prized work ends up stolen by his impatient and jealous apprentice Gustafson "Magic Man G".
Feeling unappreciated, he runs off with his mentors' book of ideas and most impressive invention, a bossy tin matador toy 'Don Juan Diego' (voiced by Ricky Martin). With life-like features and a knack for slapping him around, Don Juan persuades Gustafson to steal him away for a future of unearned popularity and success.
Where the film is enchanting and festive there are highlighted moments of grief and remorse, but nothing that's too heavy for children to understand. Plagued by poverty and loneliness, Jangus finds himself missing the wife who passed on years ago and a brilliant grown daughter, Jessica that he pushed away.
It's a really relatable moment in time, especially these days as so many business owners, entrepreneurs and creatives find themselves out of work and spiraling through feelings of failure and depression.
All thanks to his visiting granddaughter Journey who is wise beyond her years, mathematical whiz & shining light, he's able to prevent his magnificent toy shop from being repossessed by the bank on Christmas day with the power of believing and his creation of Buddy 3000. 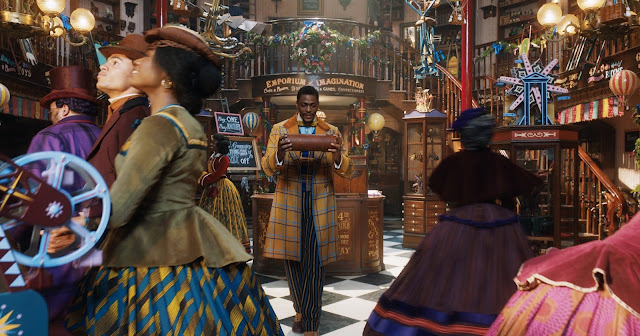 I'm a complete nerd about all the details that go into shaping a film and loved how it was a priority to celebrate and pay homage to Black culture.
The Afro-Victorian costumes were absolutely everythaaanggg, do you see how luxurious they look?! When you think of the early 1900's it was practically unheard of to see people of color dressed to the nines and nonetheless in attire that showcased stunning, vibrant African prints. With every braid and twist, the cast was styled to showcase the beauty of natural hair. Phylicia Rashad's hair was inspired by and intended to resemble that of Lena Horn and Toni Morrison and it all looked fabulous!
I'll get into the choreography a bit more below but there's one dance scene that looked like it was straight out of a college fraternity step show and had our tween leap right out of his seat to stomp and clap along.
If you look close enough you'll see that some of the buildings within the town of Cobbleton are named after famous Black inventors, scientists, and innovators which are such important details. Real talk, how many of us grew up not knowing the significant contributions that so many Black geniuses have made simply because they weren't mentioned in any of our school textbooks?
There are also tons of similarities to movies we've all loved as children: Mary Poppins, A Christmas Carol, Short Circuit, Peter Pan, and there's even a quick tribute to Black Panther's Wakanda that we missed when we first watched.
If there's a movie we missed please let us know in the comments, so we can compare it too! 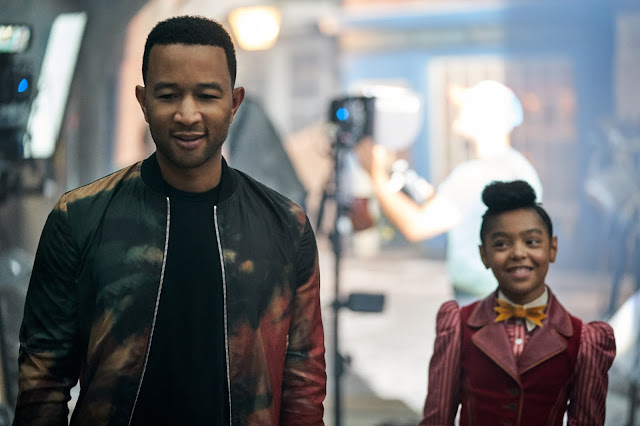 At the center of any phenomenal musical are the captivating songs that give you all the feels and become instant favorites that are belted out and sung repeatedly. Let's be real there aren't tons of holiday movies with a memorable, soulful soundtrack and offhand the only ones I could think of were 'The Preachers Wife', 'The Best Man Holiday', and 'This Christmas'. With 7 songs and 5 reprises, the music behind Jingle Jangle highlights an array of genres that mix traditional theater elements with R&B and pop vibes. You're going to want to give the entire uplifting soundtrack a listen when it releases on Friday, Nov. 13th, it's truly so dang good.
I knew the snowball fight scene was instantly going to have my dance-loving kids tapping their feet and nodding along to the culturally infused movements. Watching Forest Whitaker get in on some of the dance moves at that moment was really unexpected and cool to see him all loosened up. The first musical film my two brown boys ever got hyped over was 'The Greatest Showman', so it was no surprise that the amazing choreographer Ashley Wallen was called in for this project. All throughout the movie we're given show-stopping performances with grandiose moments inspired by musicals from back in the day and combined with African dance movements that have gone viral all over Tik-Tok and Instagram. 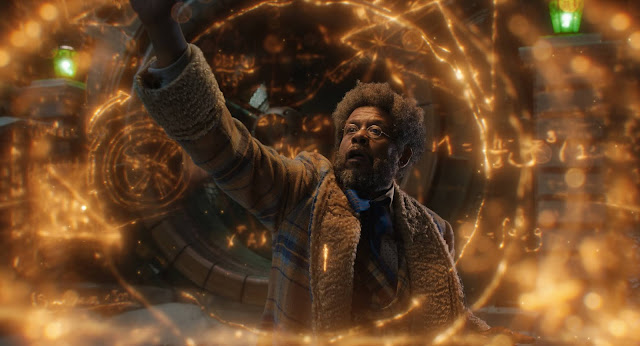 There's no denying that Jingle Jangle is visually stunning to watch and what's even more impressive is that the massive team had to finish up the film while in the midst of a pandemic and on lockdown. We can't even imagine the amount of work that goes into pulling off a production of this caliber, or how they were able to make the toys seem so realistic. Where Don Juan Diego had great comedic timing, Buddy 3000 reminded me of a curious robotic toddler and both were given their own realistic personas that made them really expressive with every movement and facial expression.
When Jeronicus and Journey worked out mathematical problems it was cool to see the golden formulas float across the screen and reminded us of the days when we'd use our fingers in the air to try to solve an equation while doing homework. 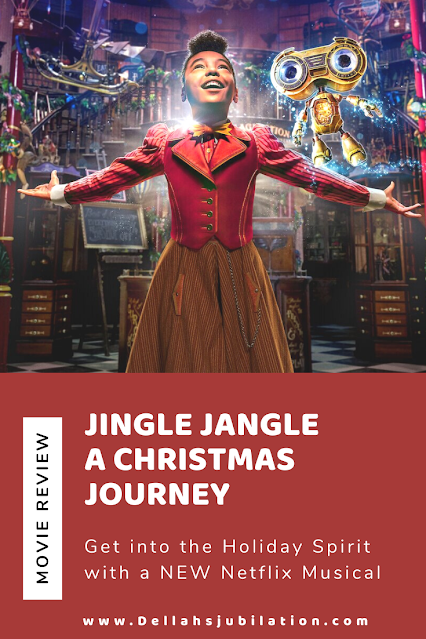 What makes Jingle Jangle: A Christmas Journey so spectacular is that it's a film created to show in an inclusive way that people of color and diverse backgrounds can not only be super intelligent inventors but can also exist in a magical, fantasy world too!

Find your matching jammies for you and the fam, make some frozen hot chocolate, and pile up on the couch to watch pure Black joy unfold starting Friday, November 13th on Netflix.