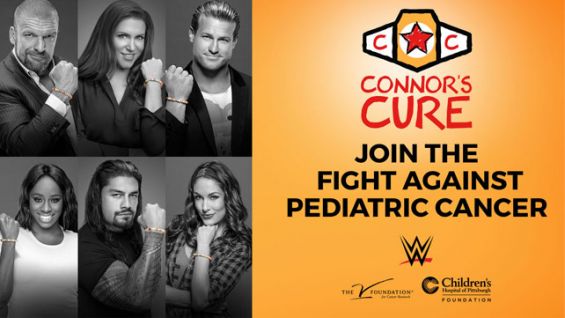 Children are just so resilient, even in the face of adversity in situations where most adults would crumble and it just breaks my heart to know so many have to fight to persevere against Cancer. Having been diagnosed with a chronic auto-immune disease in my late teens I could never imagine a child of any age having to endure some of the awful symptoms of battling a terminal illness like Cancer and the toll it takes on them not only physically but mentally. If you're a fan of the WWE then you are all too familiar with the story of the vibrant, humorous, cancer-fighter Connor Michalek, an 8 year old who inspired everyone who was in presence or watched him from a television screen across the WWE Universe. His passing in 2014 of pediatric brain cancer was just heart wrenching to watch as a mom, and Connor "The Crushers" story of hope and resilience will never be forgotten! 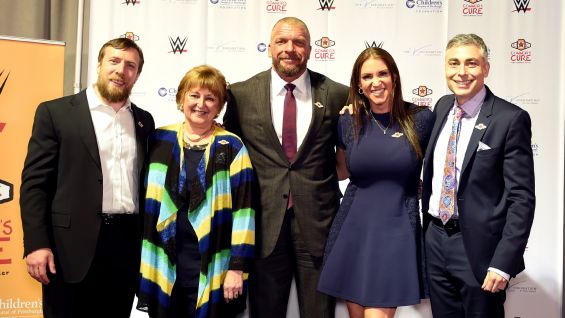 In an effort to help find cures for pediatric cancer, WWE (NYSE: WWE) and The V Foundation for Cancer Research announced a multi-year partnership to support cancer research nationally through funds raised by Connor’s Cure. The announcement was made at Children’s Hospital of Pittsburgh, where Connor’s Cure was originally established, with representatives from the hospital, WWE and The V Foundation. In 2014, Connor’s Cure was created by WWE Chief Brand Officer Stephanie McMahon and WWE Executive Vice President Talent, Live Events & Creative Paul “Triple H” Levesque as a fund within Children’s Hospital of Pittsburgh Foundation to support pediatric brain and spinal cord cancer research.

The new partnership will expand Connor’s Cure outside of Children’s Hospital of Pittsburgh Foundation and support other top research centers and hospitals nationwide. Connor’s Cure was established in honor of 8-year-old WWE fan Connor Michalek, a patient at Children’s Hospital of Pittsburgh of UPMC who battled medulloblastoma, a rare tumor that affects the brain and spinal cord. To date, Connor’s Cure has raised nearly $1 million and assisted more than 100 families around the world. 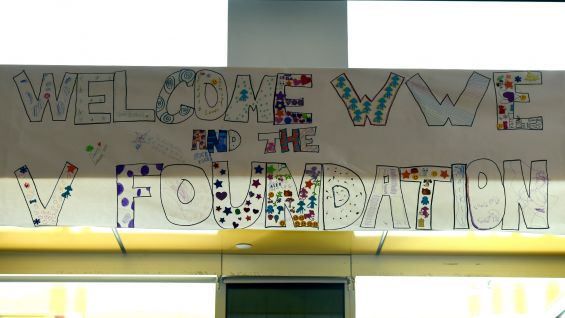 As a result of the new partnership, funds raised by WWE will support Connor’s Cure through The V Foundation’s grant-making process. The V Foundation’s Scientific Advisory Committee, comprised of world-class physicians and research scientists, vets and awards top-rated grant proposals from the nation’s leading medical facilities. In addition, funding will continue to support the research being done at Children’s Hospital of Pittsburgh of UPMC.

WWE is committed to raising awareness and funds for pediatric cancer research throughout the year through the sale of Connor’s Cure bracelets, fundraising programs and through its global platforms including WWE Network and TV broadcasts, live events, and digital and social media. 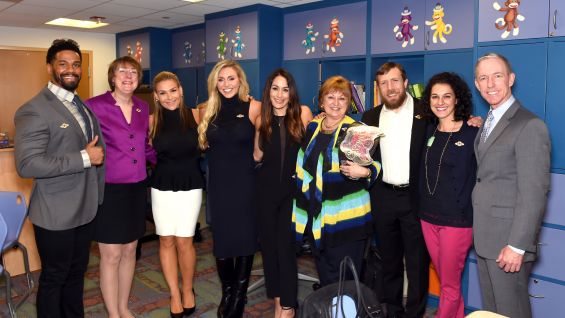 “WWE is proud to partner with The V Foundation for Cancer Research and expand Connor’s Cure in an effort to raise additional awareness and funds in the fight against pediatric cancer,” said WWE Chief Brand Officer Stephanie McMahon. “The extensive reach of The V Foundation combined with the incredible support provided by the Children’s Hospital of Pittsburgh Foundation will help bring more awareness to this devastating disease.”

“The V Foundation is proud to partner with WWE in the fight against pediatric cancer,” said Susan Braun, CEO of The V Foundation. “Funding research at Children’s Hospital of Pittsburgh and around the country, we are partnering to let the world know that we are helping children by finding cures.” 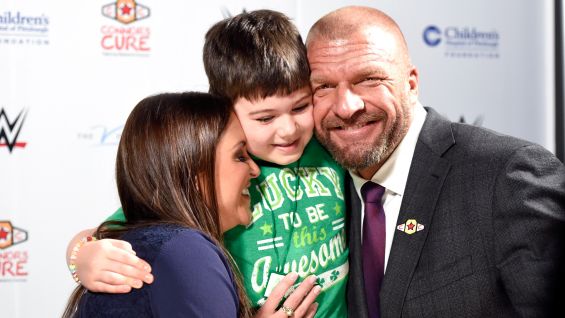 “We are extremely grateful to Stephanie, Paul, and the entire WWE community for the passion and commitment they have shown in creating Connor’s Cure and honoring the memory of a little boy who clearly touched them deeply,” said Greg Barrett, President, Children’s Hospital of Pittsburgh Foundation. “The funds raised through Connor’s Cure have already made a significant difference in the lives of children battling cancer. The new partnership with The V Foundation will expand the national reach of Connor’s Cure and work towards the ultimate goal – ending pediatric cancer.”

About The V Foundation for Cancer Research
The V Foundation for Cancer Research was founded in 1993 by ESPN and the late Jim Valvano, legendary North Carolina State basketball coach and ESPN commentator. Since 1993, The Foundation has funded more than $150 million in cancer research grants nationwide. It awards 100 percent of all direct cash donations to cancer research and related programs. Due to generous donors, the Foundation has an endowment that covers administrative expenses. The Foundation awards peer-reviewed grants through a competitive awards process vetted by a Scientific Advisory Committee. For more information on The V Foundation or to make a donation, please visit www.jimmyv.org.

About WWE
WWE, a publicly traded company (NYSE: WWE), is an integrated media organization and recognized leader in global entertainment. The company consists of a portfolio of businesses that create and deliver original content 52 weeks a year to a global audience. WWE is committed to family friendly entertainment on its television programming, pay-per-view, digital media and publishing platforms. WWE programming reaches more than 650 million homes worldwide in 25 languages. WWE Network, the first-ever 24/7 over-the-top premium network that includes all live pay-per-views, scheduled programming and a massive video-on-demand library, is currently available in more than 180 countries. The company is headquartered in Stamford, Conn., with offices in New York, Los Angeles, London, Mexico City, Mumbai, Shanghai, Singapore, Dubai, Munich and Tokyo.
Posted by Dellah at 2:55 PM