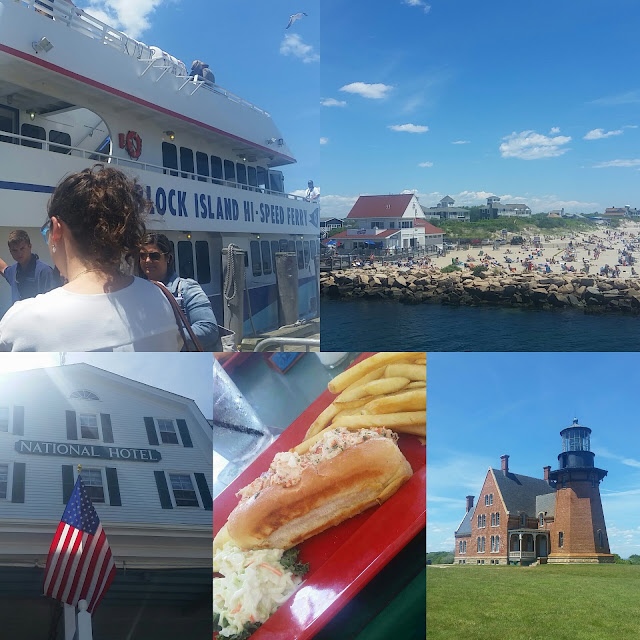 With the first official weekend of Summer behind us, I'm sure we've all been wander-lusting and counting down the days until the first travel adventure of the season as a way to get away from it all. It's bound to happen when you live in the city- all the scheduling, commuting and meetings combined with juggling family life can be quite taxing on a person mentally and physically. Unfortunately it can sometimes be really hard and often dang near impossible to get away from it all for a long block of time, so it's important to take moments to just catch your breathe & unwind even if just for a day. My recent trip to Block Island earlier this month was just the escape I so badly needed and I knew I had to tell you guys all about it. Block Island is a destination that has just a bit of everything from restaurants serving delicious foods {chowder and lobster rolls take priority} to hiking, fishing and insightful tours that are fun and educational. Thanks to Adam of Dada Rocks I was able to accept an invite from Rhode Island Tourism to cover the trip for both of ours sites, along with a very intimate group of fantastic bloggers. We were able to enjoy this serene, little island that has no traffic lights or chain restaurants with the exception of Starbucks {there go those priorities again!} and it was fantastic!

The last time I traveled anywhere via Amtrak I was about 6 or 7 years old and my mom, aunt and I rode it all the way down to Florida, which I can imagine as a kid must have been pretty cool. Fast forward to the present and I was so anxious that I'd miss my 8:30 a.m train, so much so that I passed up on popping in Starbucks for coffee on the train. I watched the schedule board flicker destinations, arrival and departure times and at the last second it announced the track number where the crowd that amassed would stampede off to to start their commute. Time seemed to pass by quickly during the 3 hour ride to Kingston, Rhode Island and I was thankful for the beautiful scenery as we rolled by. Another plus was that there was WiFi on the train and outlets for me to keep my phone charged while I used snapchat, lol. Next time I'll be more prepared and bring my laptop like Amtrak riding pro and blogger boo Nellie of BrooklynActiveMama. 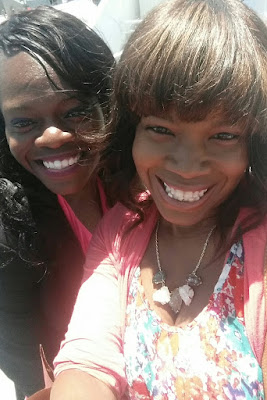 Once we arrived we were greeted by our lovely, expert tour guides and loaded onto a private and comfy shuttle that would take us to the Block Island Hi - Speed Ferry.  Everything you could possibly want to learn about Rhode Island, our guide Mark could tell you & then some.


Surprisingly, although it's a small town you may spy a few well known celebrities like pop icon Taylor Swift, Tony Goldwyn, television actor from Scandal and maybe even actress Viola Davis {a Rhode Island native} from television show How to Get Away with Murder. Make sure you peer through your sunnies every now and then for a bit of people watching.

If there are any animal lovers in your house, they'd be completely impressed in knowing that there are 450 species of migrating birds on the island and that you can visit Abrams Animal Farm  where they care for both domestic and exotic animals. We recently saw Finding Dory and I know kids at every age would love checking out Block Island Maritime Institute  for a close up look at marine life on the island. 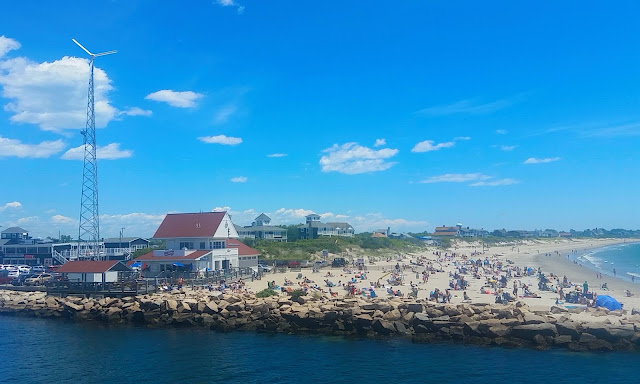 With 17 miles of unspoiled shoreline their beaches were named  one of  of "21 Best Beach Vacations in the United States" by Coastal Living.

Growing up my mom would take me and my younger sissy and brother for rides on the Staten Island Ferry, just because it was something fun to do. I know my boys would get a kick out of the Block Island Speed Ferry which had all of us cracking up at the breeze's tenacity as it sped it's way to Galilee where we'd be having lunch.


Ha! Talk about a breeze....Gorgeous day for a Ferry ride on the @blockislandferry as we headed to  the @nationalhotel for lunch. #riblockisland #blockisland #hosted #travel #travelblogger #blockislandferry #RhodeIsland
A video posted by Danielle (@dellahsjubilation) on Jun 15, 2016 at 11:58am PDT

Once us ladies got our hair back in order and made our way off the ferry we had a better chance to take in all of the scenery, since we were trying to make sure we didn't miss it's departure from Kingston earlier. 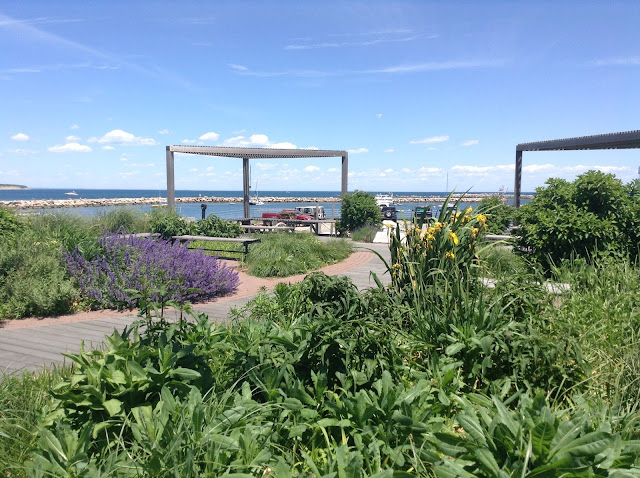 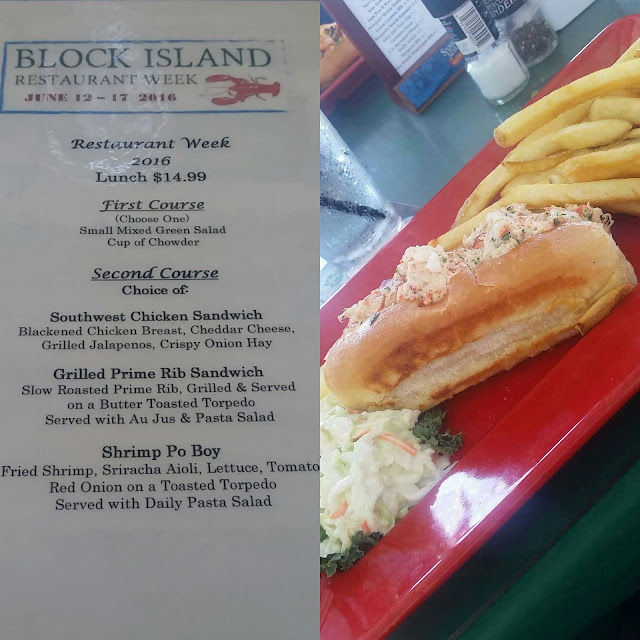 We had lunch on the porch of the National Hotel , a beautifully historic landmark with a view from our seats that overlooked the harbor. Being a fan of Restaurant Weeks here in New York I was excited that we were actually there to partake in theirs. I'm all for fine dining at an affordable price!  At first glance I wanted the shrimp po' boy off the special menu but succumbed to peer pressure and chose tradition in the cold lobster roll {I know right, poor me!} which was just as perfect as you could imagine. Around the table I know everyone else enjoyed their clam chowder, sweet potato fries, coleslaw and burgers. I'll just have to make sure to plan a trip to try out the po'boy on a future weekend trip when there's also live music. 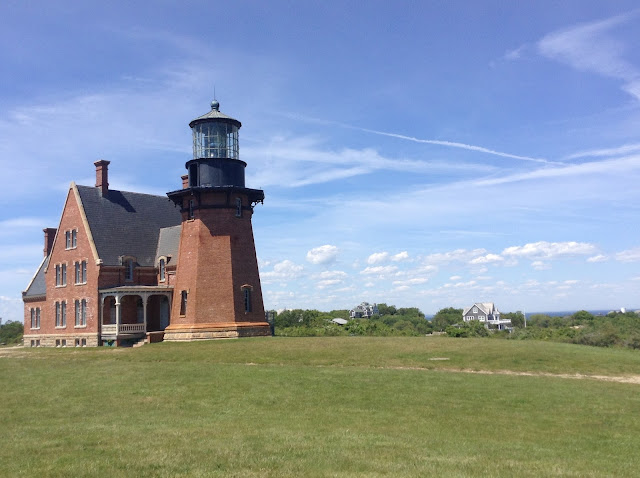 With belly's full we ventured off to the Southeast Lighthouse which was pretty amazing to see up close. I'm not sure how many times I watched Disney's Pete's Dragon when I was a little girl but I was always mesmerized by the scenes in the movie that featured the tides crashing on the beach as the lighthouse guided boats ashore. 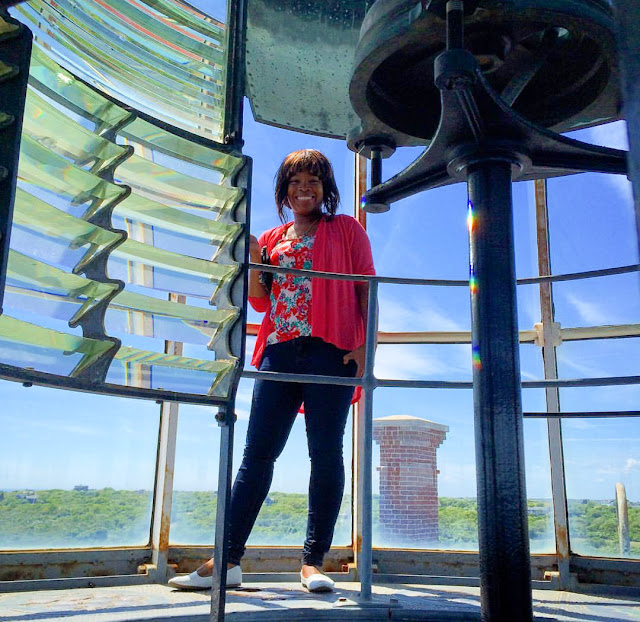 Currently the community is raising money to support their goals of renovating the inside of the lighthouse in hopes to host more guided tours which would allow patrons to the top. Just like their efforts where they rallied together to raise money to move the lighthouse 300 feet back since erosion slid it only a mere 55 feet from the water back in 1990. 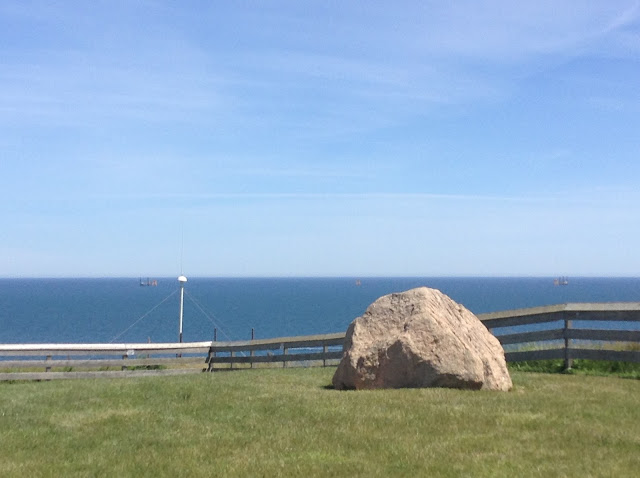 Block Island windfarm is America's first offshore windfarm that uses the harnessing of strong and steady ocean winds to be transformed into clean and cost effective electricity which can be transported where needed. 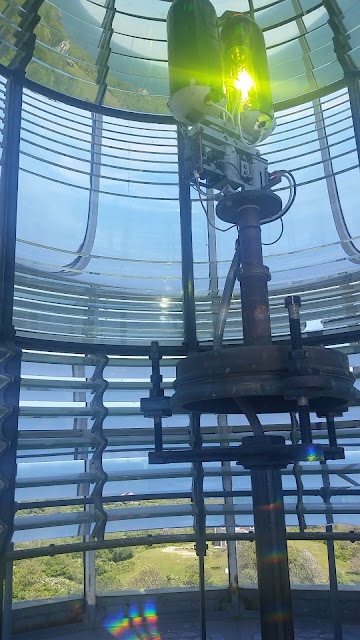 We climbed the spiral stairs to the top and made sure not to touch the glass surrounding the light all the way around, no smudged fingerprints! The views from the top were breathe taking, surprisingly we could see all the way to Montauk, Long Island. 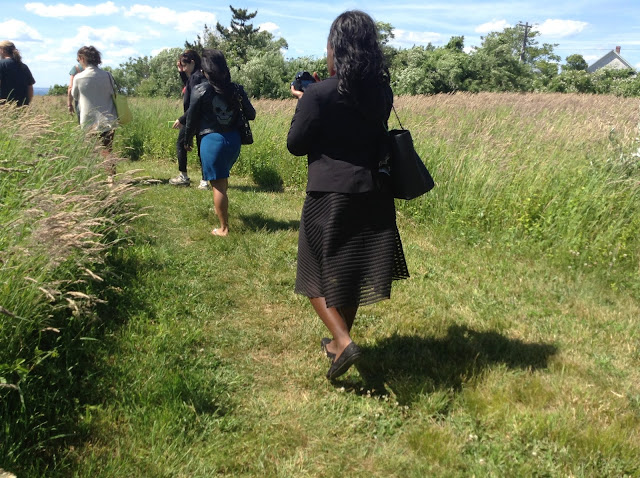 Scavenger hunts are a great way to bring families and friends together fun a good time, who doesn't love a little healthy competition among your favorite people? After our tour of the lighthouse we checked out the Glass Floats Project which seemed like a very unique & out of the box experience and we all joked about who would find one first.

"550 Glass Floats (glass orbs about the size of a grapefruit) will be hidden on Block Island. Floats will be dated, numbered and stamped with the shape of Block Island. All floats are clear glass except for 16 (because it is 2016), which are special colored orbs. One super special float is made entirely out of gold leaf."

This years scavenger hunt started this June and thus far only 33 have been registered over the last 4 weeks. I can't believe none of us were fortunate enough to find one, but you can catch a glimpse of a special colored one in the video below. 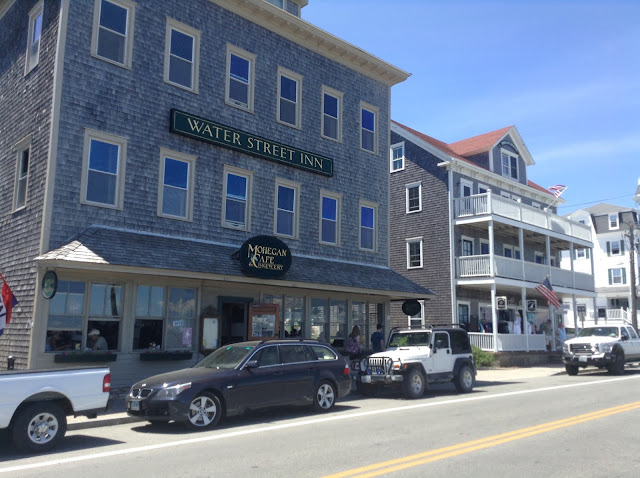 Realizing the time, we headed back to the National house for a few final photos before we had to board the Ferry. Back in Kingston and with about an hour of downtime before our Amtrak arrived we made a quick stop for ice cream. Avoiding the usual flavors we all tried out one of the unexpected mixes that were so darn good, a really sweet & refreshing way to end the day.

Take a peek at our trip

Block Island is an exceptional way to escape the hustle and bustle of the city with beautiful beaches, tons of outdoor activities, shopping and nature at every turn.

Which of these moments on Block Island peaked your interest & would make it onto you itinerary?