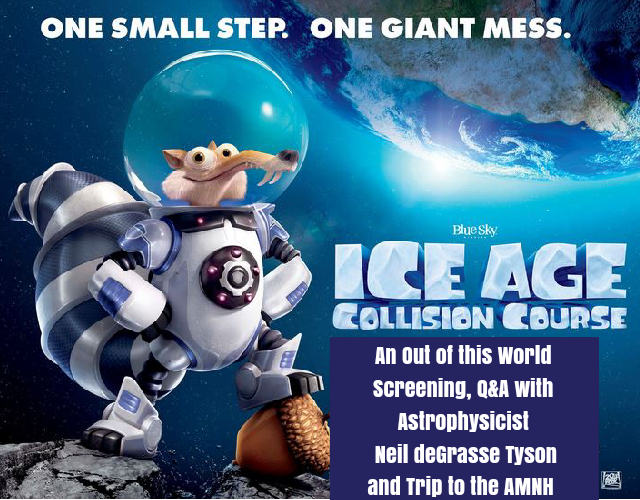 I'm all for a family fun movie that's not only going to cause a case of the giggles but that inspires kids to make connections to science without them even realizing they are learning. Thanks to 20th Century Fox and the American Museum of Natural History the boys and I got to attend an early morning screening of Ice Age Collision Course at the NYIT Broadway theater in 3D, asked questions during an interview with pop-culture's favorite Astrophysicist Neil deGrasse Tyson and enjoyed a private behind the scenes tour at the AMNH.

Note: We were provided tickets to screen the film and to visit the museum as media, no other compensation was received and opinions expressed are 100% my own.

Ice Age Collision course is in theaters now and definitely a must see, so grab your tickets to see it in 3D and be prepared to laugh! The fifth installment has us following the prehistoric adventures of Sid, Manny, Diego, their hilarious herd and the acorn chasing Scrat who's nutty obsession leads to a collision of mishaps that could destroy the ice age world. From steering clear of high flying, feathered dinosaurs, discovering love and the fountain of youth - to using electro-magnetic asteroids to save the Ice Age, your kids will enjoy and maybe uncover some interesting STEM lessons along the way while rooting for Scrat to finally catch that acorn. 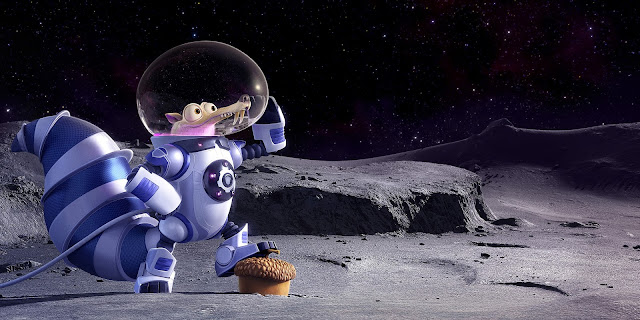 After the screening we were able to interview Neil deGrasse Tyson who voices Neil Debuck Weasel a character who knows everything about the cosmos and gives a scientific -masterminded plan to save them all from danger. During the interview Neil talked about his experience doing voice over work, how funny he thought it was that his character resembled him so much and what it's like to be a scientist. 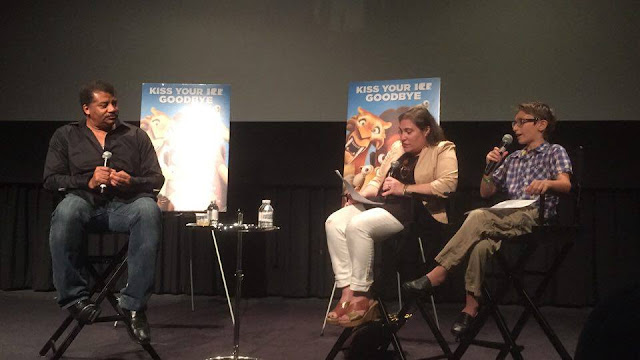 Neil deGrasse Tyson: "A scientist is a kid who never grew up.  When you’re kid everything is interesting to you.  What is that?  What happens if I do this?  What happens if I roll it?  Okay, well then, you know, let me roll it faster, even faster.  That’s kind of cool.  Does this unscrew?  I don’t know.  What happens if I put--kids do this, that’s what grownup kids do who are scientists. Everything that we don’t know and understand is a target of our curiosity.  We care about what we don’t know, just like kids.  Kids ask way more questions than grownups do, and something happens between being a kid and being a grownup.  We no longer ask questions.  We are no longer curious." 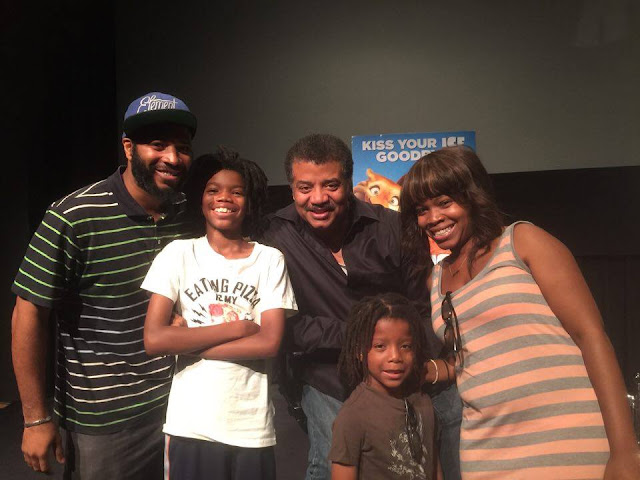 As a parent one great takeaway I received from the interview was to get out of the way of our kids - if there's a puddle of mud and you have nowhere special to be let them jump in it, and then teach them a little something about craters. If there's an egg on the counter and they want to hold it, stop worrying about it breaking because you can teach them about material science: the eggshell is hard, the yolk is wet and gooey and at the same time it could be tomorrow's breakfast!

There was a scene in the movie where Scrat is inside the spaceship and ends up getting squashed by the acorn which seemed heavier than normal and our 5 year old Tristan asked Neil how it was possible and learned a little about gravity:

Neil deGrasse Tyson: "So, if it's the scene I think you are remembering, --the squirrel is like a pre-squirrel.  It's a prehistoric squirrel, the Scrat we call him, and he accidently hit a lever that changed the gravity in the spaceship to be like 57 times bigger." Now, how much do you weigh now? Maybe 50 pounds? 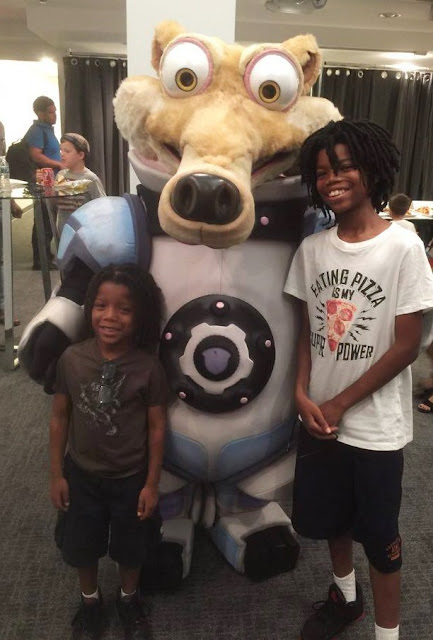 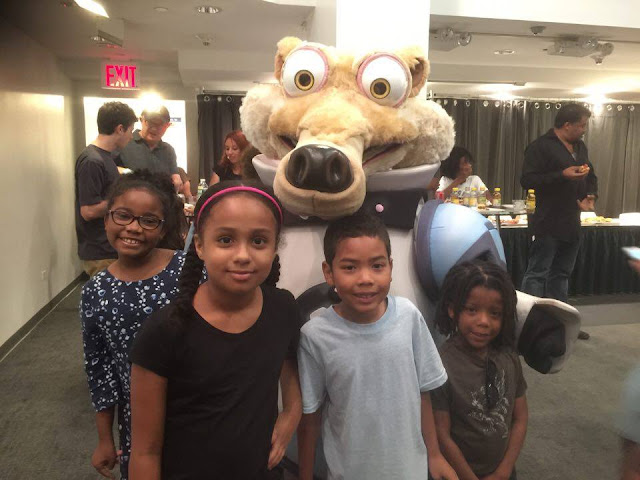 After the interview we enjoyed lunch, taking pics with Scrat and some one on one time with Neil who was so sweet with the kids and tried to answer as many questions as he could. If you really know my husband you'd know that he's a big science geek and I'd never seen him smile so big in my life during these types of screenings. All three of my boys were perched at the edges of their seat, hanging on to every awesome word that Neil said. I'd never seen our 11 year old so engaged in a conversation on science. If they could have followed him around the whole day they would have & they were really hoping he'd join us at the museum. 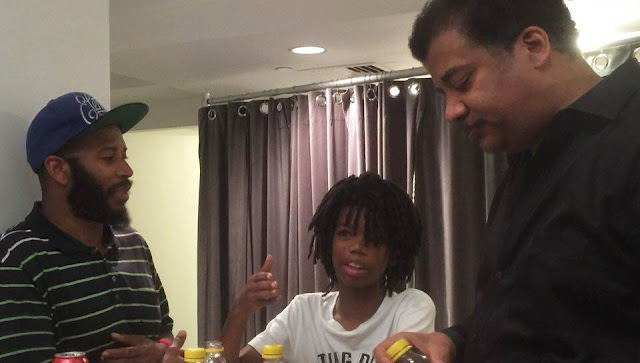 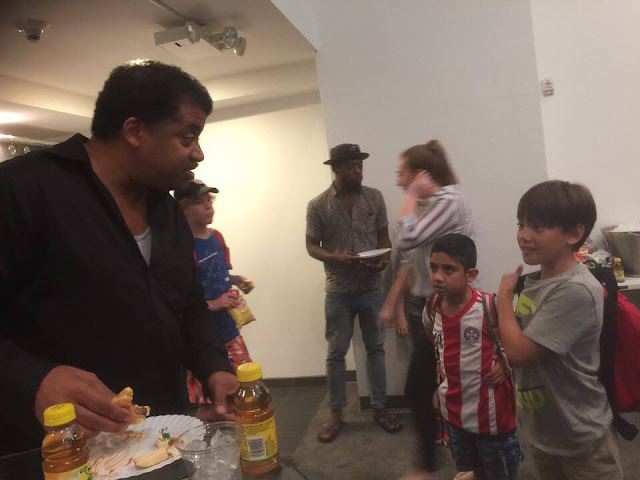 We all boarded a charter bus and headed further uptown to the American Museum of Natural History where we checked out the Dinosaurs Among Us Exhibit and finally got to see the Titanosaur who was so large he couldn't even fit in the room. 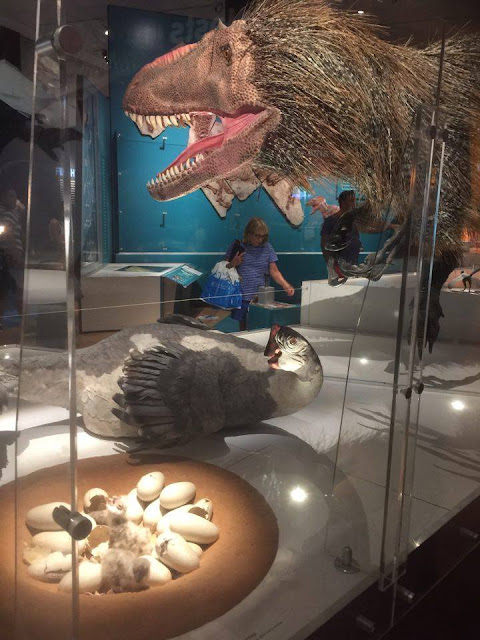 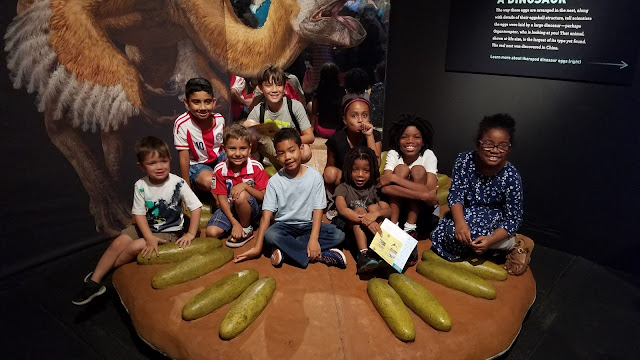 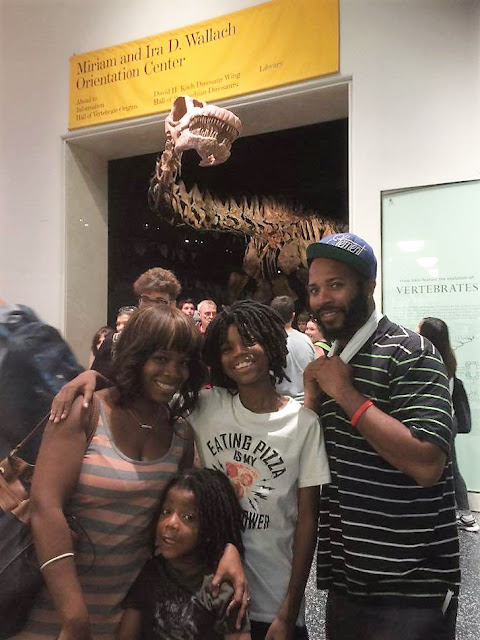 Later that afternoon we visited the Hayden Planetarium {only CJ had visited on a class trip} for our first time as a family where we viewed Dark Universe which taught us about the history of the universe and our role on it & featured Neil's voice as the narrator. As a former school educator and a mom I loved how the day encouraged kids of all ages to think a little deeper about science and to even explore more during everyday moments. Take a look at these cool facts and see Ice Age: Collision Course in theaters now!

Ice Age: Collision Course - In theaters now
Scrat’s epic pursuit of the elusive acorn catapults him into the universe where he accidentally sets off a series of cosmic events that transform and threaten the Ice Age World.  To save themselves, Sid, Manny, Diego, and the rest of the herd must leave their home and embark on a quest full of comedy and adventure, traveling to exotic new lands and encountering a host of colorful new characters.