The Kid Who Would Be King: Interview with Cast and Jr. Knight Training #KidWhoWouldBeKing 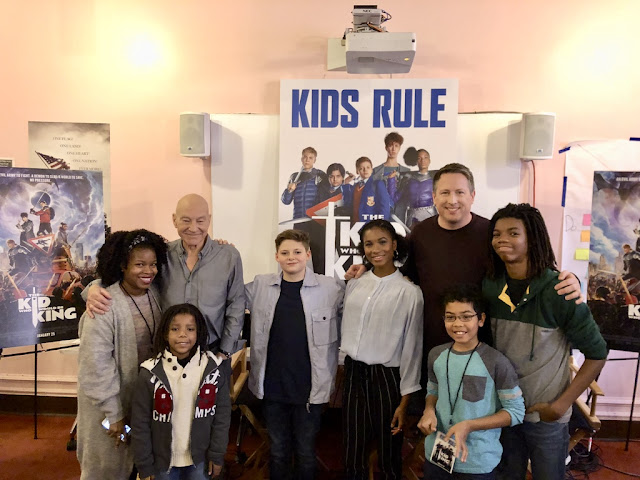 Disclosure: We attended this press junket as media views are 100% our own.

Remembering my love for the animated, classic movie The Sword and the Stone and reading the adventures of the Knights of the Round table, I was looking forward to the new spin on the story of King Arthur in the recently released film "The Kid Who Would be King" that hit theaters this weekend. In anticipation of the movie we attended a fun NYC press junket where we watched an early screening of the film, interviewed the legendary Sir Patrick Stewart, Director Joe Cornish and the cast, trained to become honorary knights with a lesson in swordsmanship and trip to our favorite toy store, FAO Schwarz to see who Excalibur would choose as the new king! 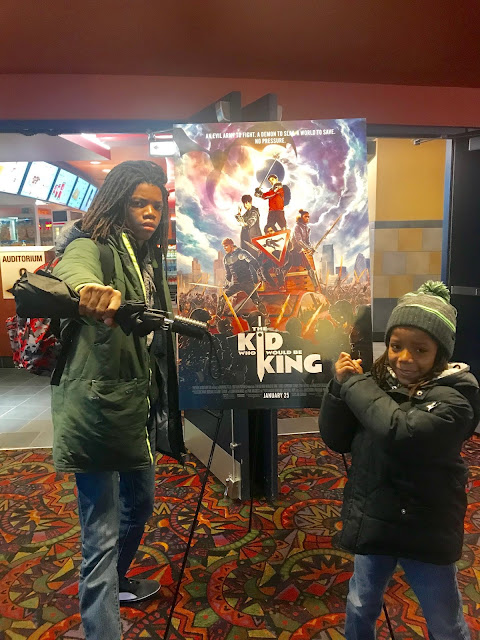 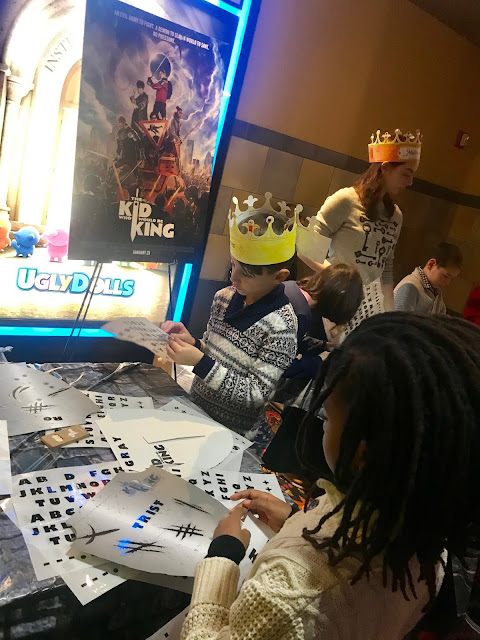 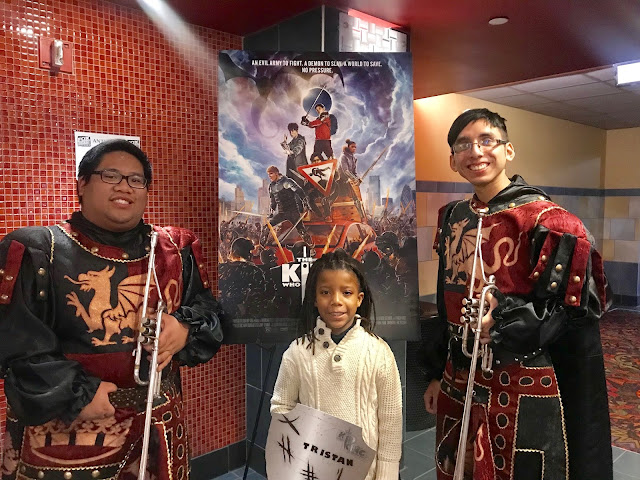 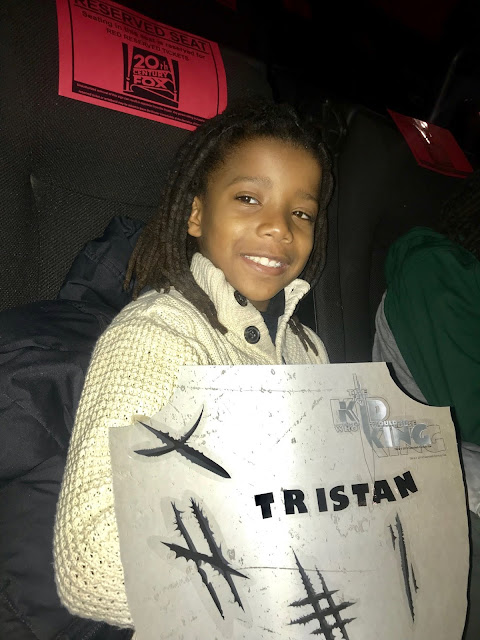 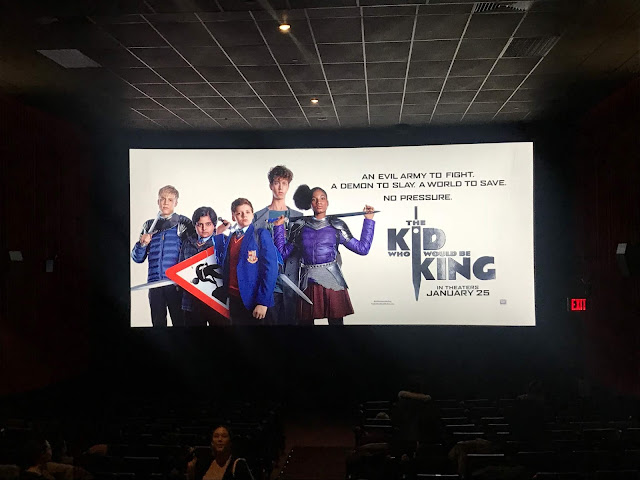 Once we arrived to the Regal Cinema in Union Square we were greeted by the Medieval Times trumpeteers and before the start of the film the kids jumped right into some crafting activities where they decorated shields and crowns. 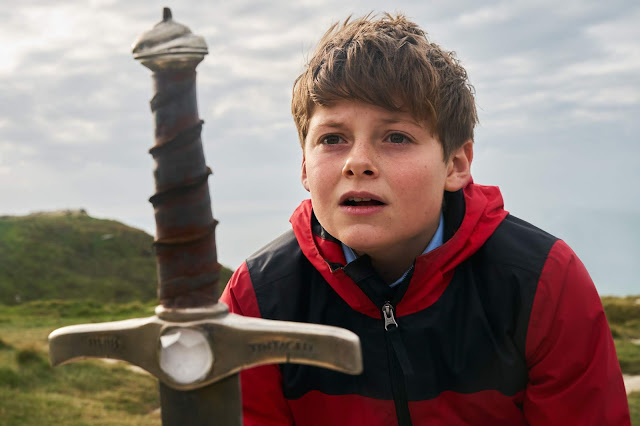 Presented by Twentieth Century Fox, the film The Kid Who Would be King is a story where old school magic meets the modern world in an epic adventure where Alex {Louis Ashbourne Serkis} thinks he's just another nobody, until he stumbles on the mythical Sword in the Stone  "Excalibur" after being chased onto an abandoned construction site by two school bullies, Lance {Tom Taylor} and Kaye {Rhianna Dorris}.

With the future at stake, Alex must become the great leader he never dreamed he could be and unites his best friend Bedder {Dean Chaumoo} and their enemies to form a new round table. Together, with the legendary wizard Merlin {Sir. Patrick Stewart} who takes on a teenage form {Angus Imrie} to blend in with the other students, the band of knights must take on the wicked enchantress Morgana {Rebecca Ferguson} who has been awakened to summon evil forces to take over the world.

In this current political climate, you can't help but relate to how many of us are hoping that a true leader emerges to takes their place to stand up against the bad guys and wrong doings in the world. 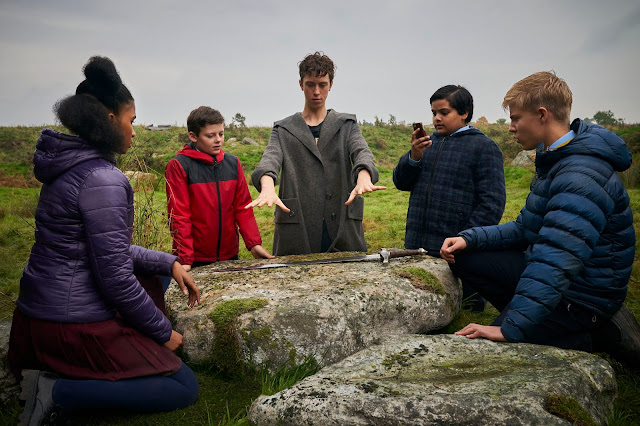 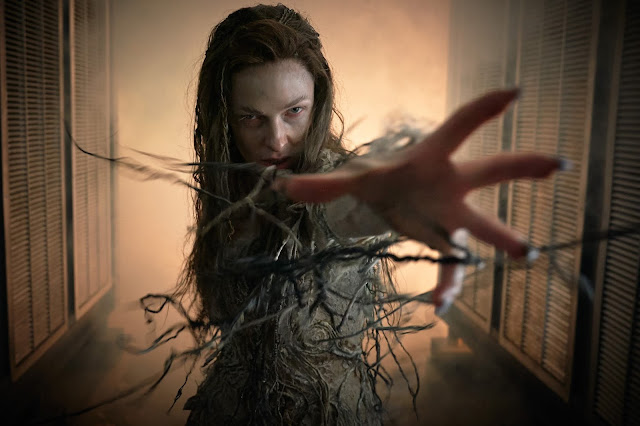 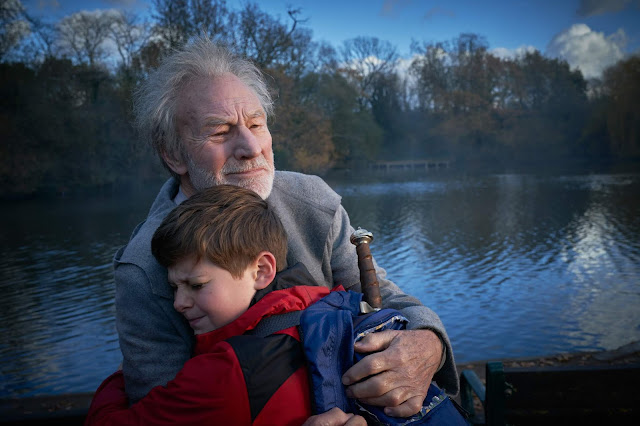 Our tween and teen truly enjoyed the film for it's humor and the crazy fight scenes with dark creatures who ride wildly on horseback with swords of fire (may be a bit scary for the younger ones). Of course Chris and Tristan tried recreating Merlin's magical sequence of hand movements into their own new handshake,  Angus Imrie as young Merlin was clearly their favorite character.

As a parent, what I loved about the movie was that it stayed true to the Arthurian legend: be honorable and stand up for those who need your help. We've taught the boys empathy and explained to them that sometimes not everyone will like you or want to be your friend and that's alright, but it's always important to do what they know is right and to treat people with kindness.

Unfortunately both of our kids have experienced bullying in school, where each had been through physical situations that were brought on by very troubled students at both their elementary and middle school. 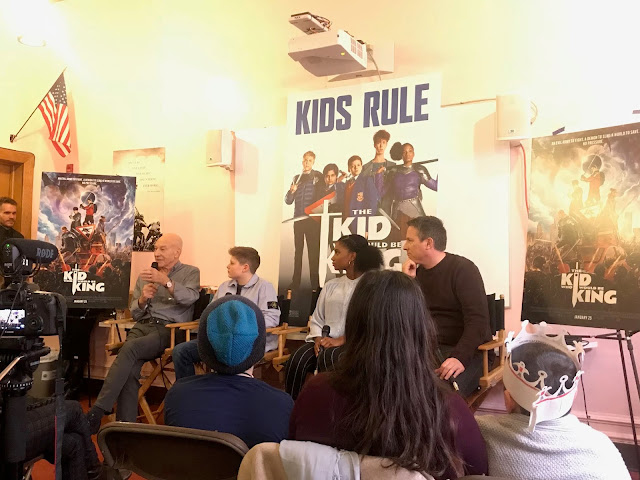 When Tristan raised his hand and grabbed the mic to ask the cast a question I couldn't believe how brave he was! Definitely a proud mommy moment, so proud that I was caught up listening to him and didn't record the conversation but you can listen to it here in The Mama Mavens video: starting at 3:48

For many of us, we were all pretty surprised when Sir Patrick Stewart revealed that growing up as a child he in fact was a bully who treated other children badly as a result of the unsafe environment and situations he was exposed to at home.

Tristan: What advice would you give to a kid being bullied at school?

Louis Ashbourne Serkis: If you're being bullied I would tell a teacher, alert your family, speak to someone and don't suffer in silence.

Director Joe Cornish: "The bullies won't do well, it's the people that are bullied that do well and get on in life. And bullies have usually got some kind of problem in their own lives."

Sir. Patrick Stewart: "I was a bully,  I've actually never spoken about this in public before but I was. I came from a background where my home life wasn't particularly safe and so the example I was being given was a very bad one. And I look back at what I did at that time and I am ashamed. I felt that in some way I needed to make myself feel important and the only way that I could do that was to control other children. I can't make my family responsible for what I was and who I was but it was an element and I deeply regret it now, and it's partly why I've become an activist against Domestic violence. It's a way of apologizing for what I did when I was a kid." 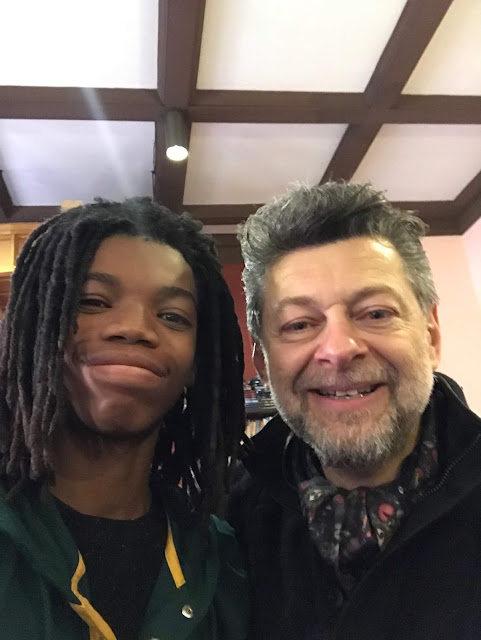 Did you know that in real life, Louis ashbourne Serkis's father is famous actor Andy Serkis? CJ spotted him and knew that he had to get a pic with the villain of Marvel's Black Panther {Klaw} and Gollum from Lord of the Rings. 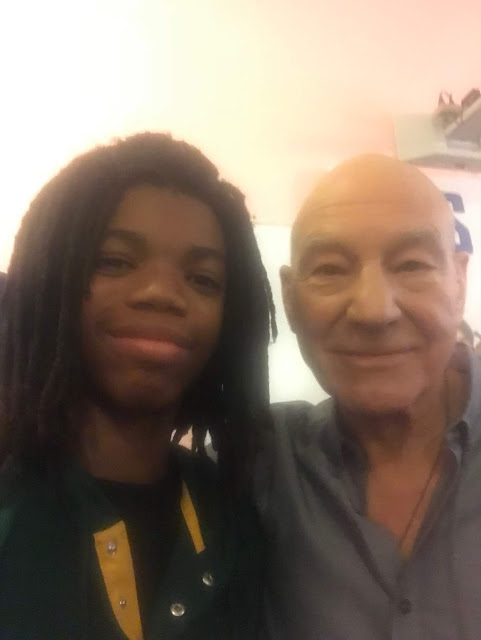 An epic pre-birthday selfie for CJ with Sir Patrick Stewart who was really lovely to meet. 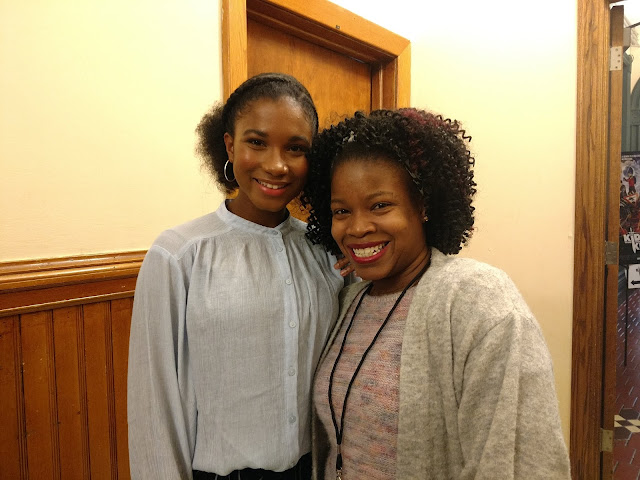 Rhianna may have played a bully in the film but she was the sweetest in person! Loved watching her character develop into Lady Kaye and her messaging during the interview about the importance of a girl being strong yet being able to show her vulnerability. 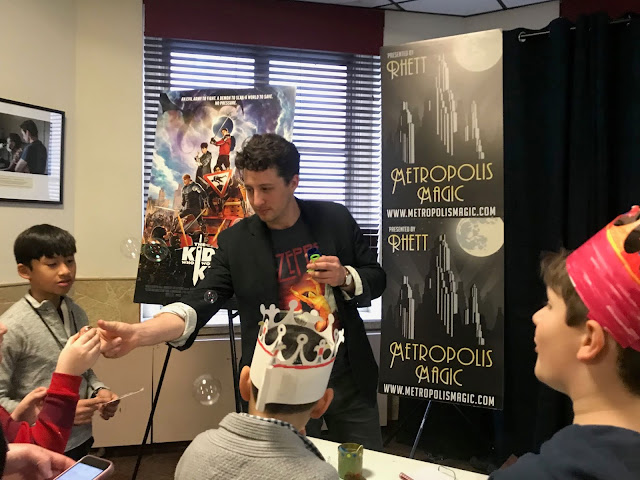 Who can resist a few cool magic tricks while having lunch? Naturally like Merlin in the film, this magician had to rock a Zepplin t-shirt. 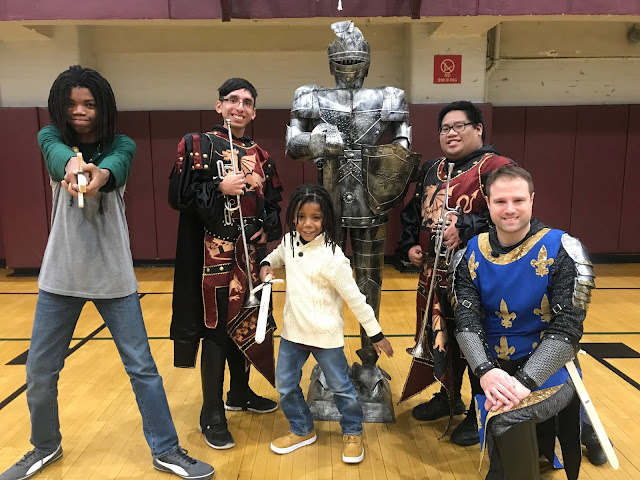 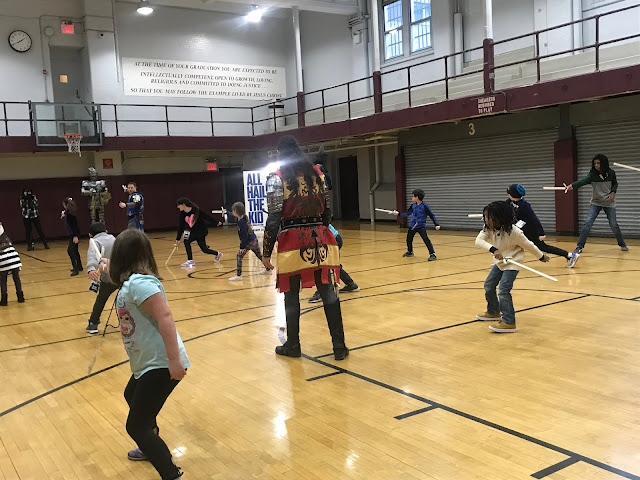 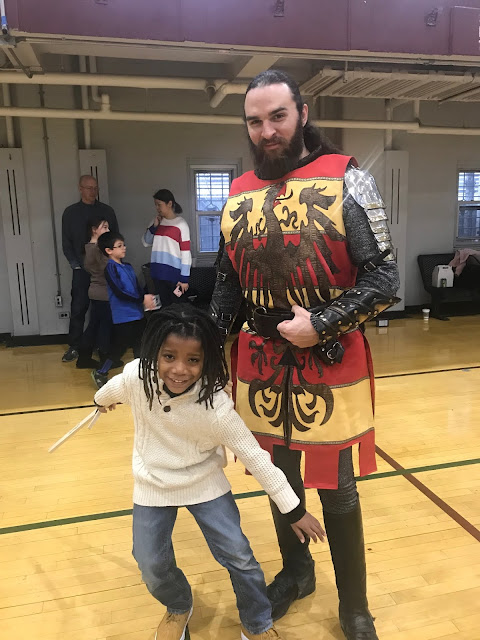 The Royal Knights from Medieval Times were on hand to teach the kids some techniques with the sword before officially knighting them. All hail the kids! 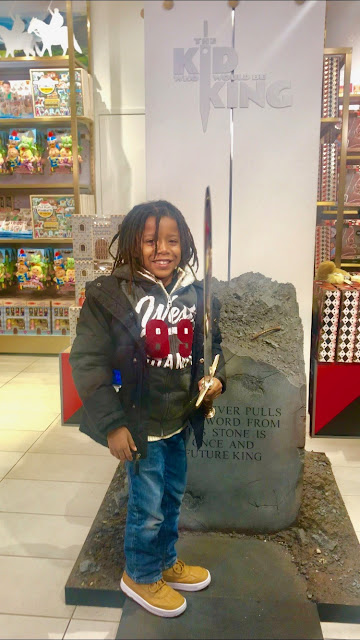 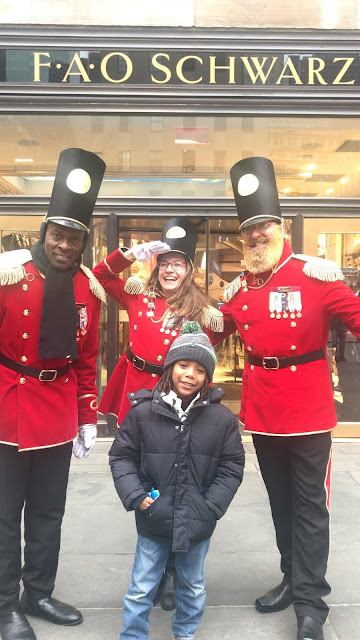 Our last stop of the day was to FAO Schwarz where everyone had the chance to try to remove the sword from the stone.

The Kid Who Would be King is in theaters now! Stay up to date on all the latest news:

Email ThisBlogThis!Share to TwitterShare to FacebookShare to Pinterest
Labels: 20th Century Fox, Bullying, Entertainment, Interviews, Lil' Monsters in NYC, Movies, Movies and Television, The Kid Who Would be King