Everything You Need to Know About the Queens International Night Market 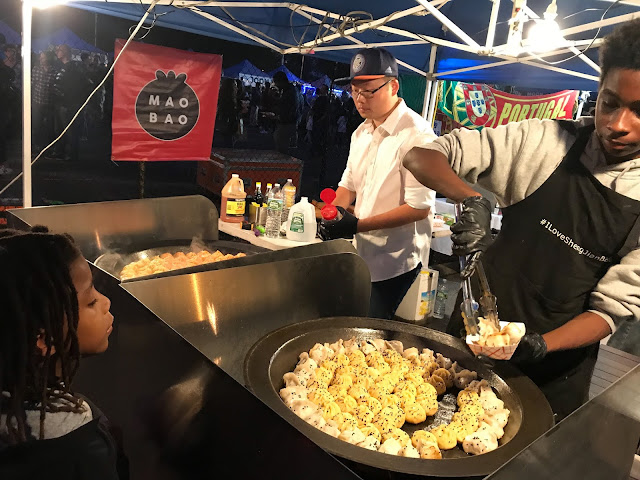 Spring in NYC means festival season is in full swing and NYC foodies and visiting tourists are going to get the most bang for their buck at the family-friendly Queens International Night Market. Growing up and raising children in Queens, New York has allowed Mike and I to expose our children to a diverse, variety of cultures that encompasses a beautiful mix of people, delicious flavorful foods and vibrant arts from around the world, without leaving the borough.

Sneak previews began April 20th and 27th and because of the unexpectedly large turnout on opening nights their first two years, limited $5 tickets were sold to minimize traffic, congestion, and the impact on the surrounding community. At least 20% of the ticket proceeds will go to the charities New York Immigration Coalition and City Harvest. The Queens Night Market will feature 20 new vendors this year and will be free and open to all starting on May 4th and every Saturday night at 5pm through August 17th & from September 28th to October 26th. You can check out our video of the yummy experience we had last year and grab some useful tips on what you should know when you head to the market. 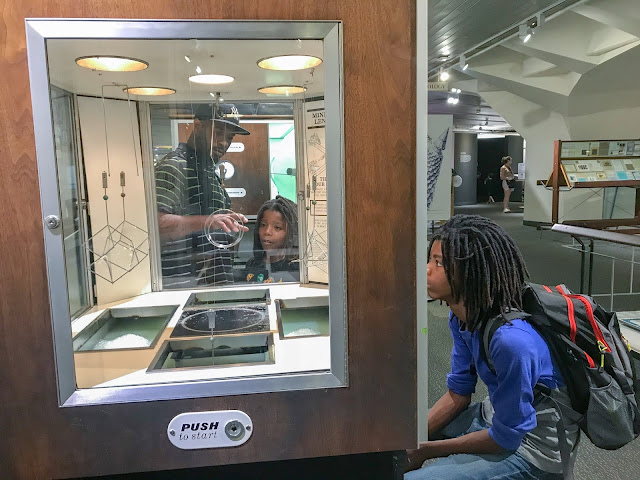 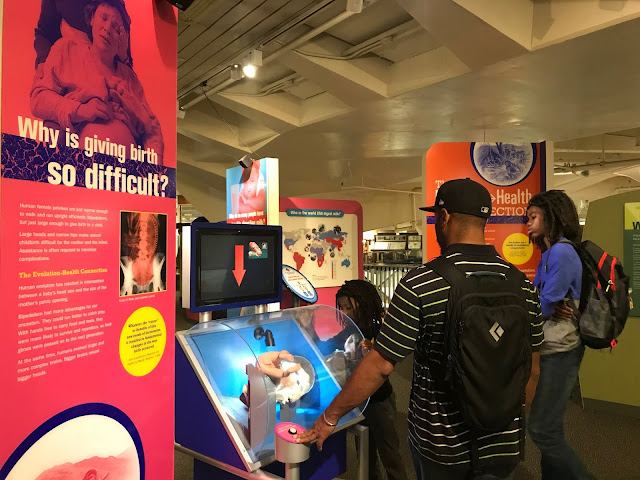 1. ARRIVAL EARLY & VISIT THE NYC HALL OF SCIENCE
This year, unlike previous seasons, you can enter the Queens International Night Market an hour earlier at 5 pm.  We decided since it had been a minute since we had last visited, that we'd kill some time and start the afternoon off at the NY Hall of Science since it's right next door. When we exited the hall at closing, the boys played outside as we watched cars suddenly driving into the lot around the corner. It took a moment to realize that they were all arriving for the night markets opening, an entire hour early to line up. On the website, they advise if you plan to drive in you should aim to get there with enough time to find a suitable parking spot since there are limited offerings. Ultimately your best bet would be to take the 7 train in because it's nearby but if you're planning to hang out till close at 12am make sure to check the MTA weekend schedule which can be unpredictable. 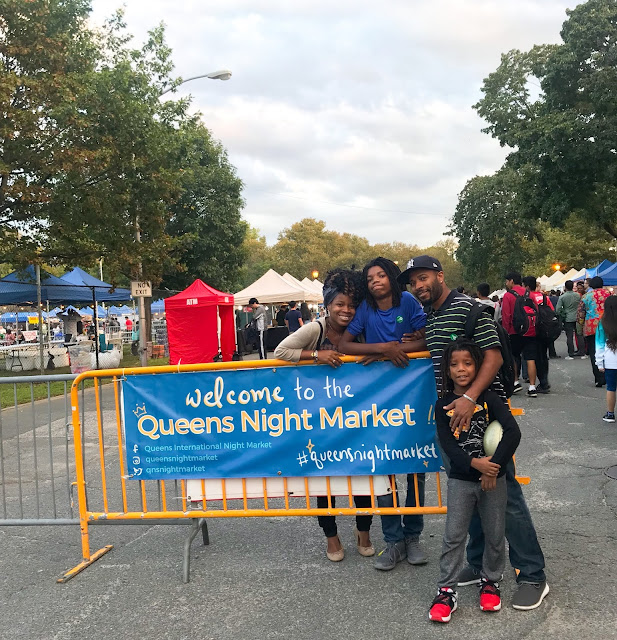 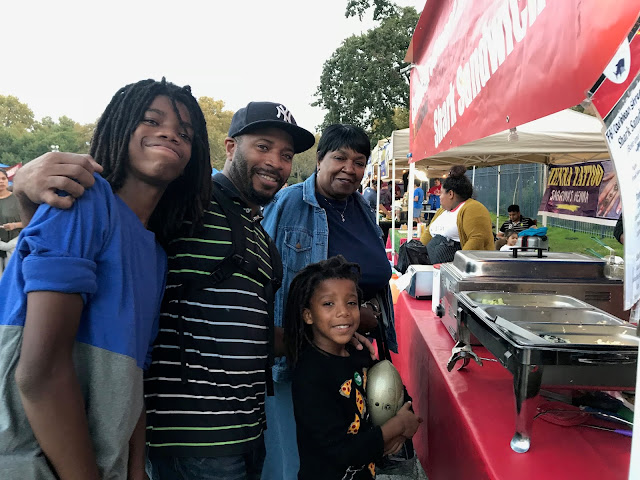 2. BRING YOUR APPETITE & AN OPEN MIND
Be prepared to enjoy good eats from all over the world, whether you're looking for a favorite dish that reminds you of home or something you've never tried before, there's literally a savory or sweet option for everyone. I must say there were definitely a few choices that had us raise an eyebrow (like balut and anything that mentioned blood!!) but we were ready to try just about anything. Since hubby is a chef and I LOVE food (despite a chronic gastrointestinal disease) we've always encouraged our kids to venture beyond what we eat at home in hopes to expose their taste buds to something new. Since preschool, they've enjoyed everything from Soba noodles and edamame to sushi and gnocchi.

You can't beat the price point, with a $5 - $6 cap on food, you could walk around and taste an assortment of bites that are all well portioned. Depending on your appetite, after checking out 3-5 vendors you could honestly end up full. We'd recommend that if you're going in a group (especially with kids) that everyone choose a handful of different options and share a few things here and there so you don't have to fully commit to something you may not like.  Honestly, there was not one dish we tried, that our tribe didn't enjoy! There's also a beer and wine garden for guests ages 21+, in previous years the area was enclosed with security and you you had to stay there to indulge, this year visitors are now allowed to walk around with their drinks. My guess is this needed to change so that people could still check out the food vendors as the night progressed. 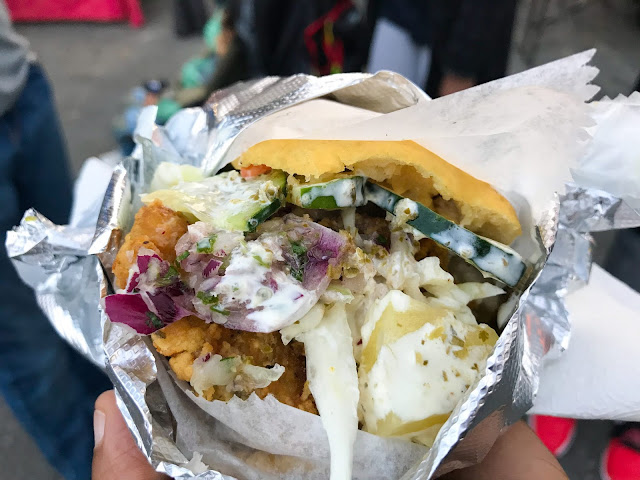 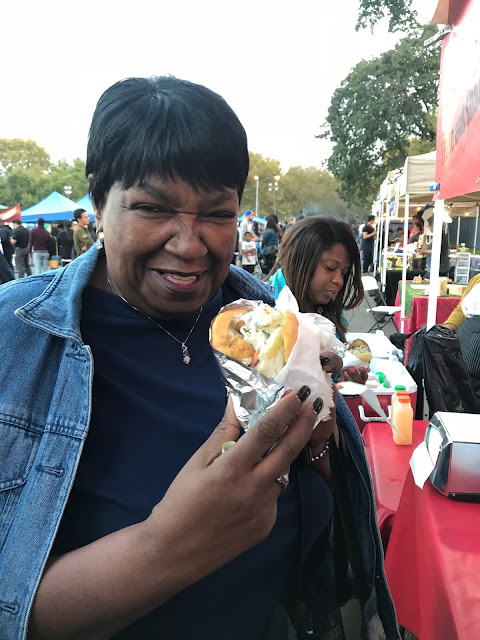 Years ago while randomly stumbling upon a street fair in midtown we had missed the chance to try out shark for the first time because it was all sold out, so it's been on CJ's foodie bucket list ever since. Imagine how happy he was to see that  Caribbean Street Eats was serving their infamous Trinidadian shark sandwiches. Our auntie Rita seemed hesitant at first but you better believe she finished every bite of hers! 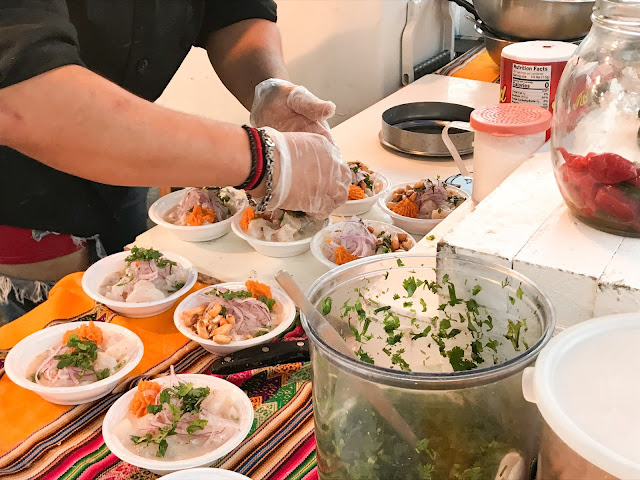 Don Ceviche - Ceviche is a seafood dish (not prepared w/ heat) typically made from fresh raw fish cured in citrus juices, such as lemon or lime, and spiced with seasonings including chopped onions, salt, and cilantro. 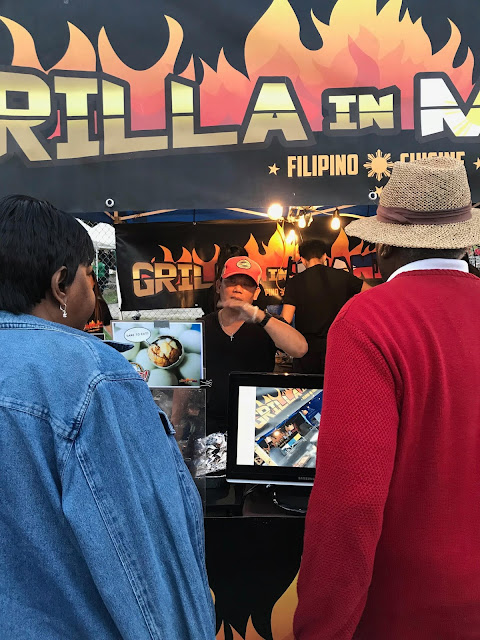 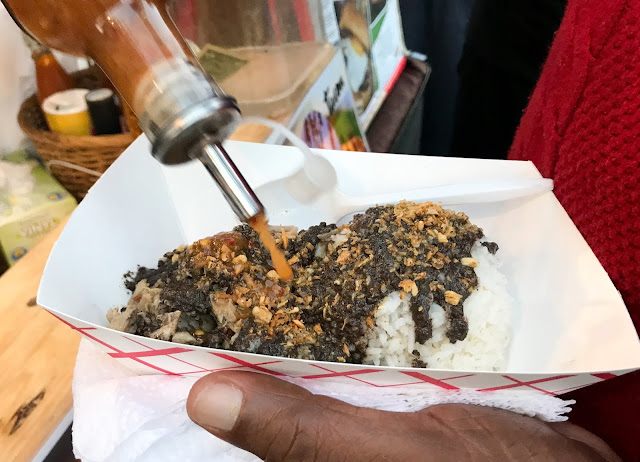 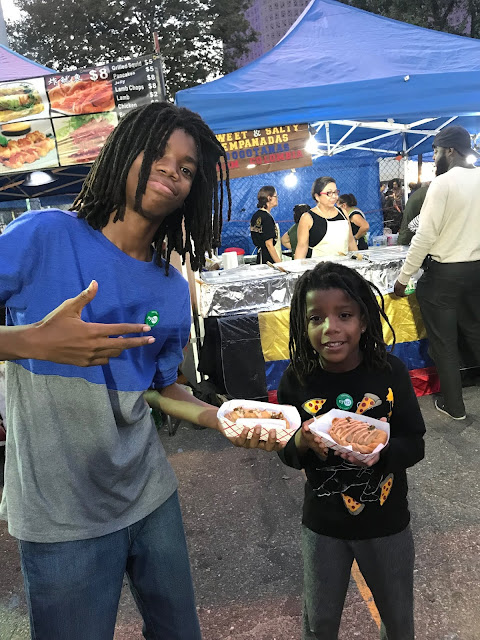 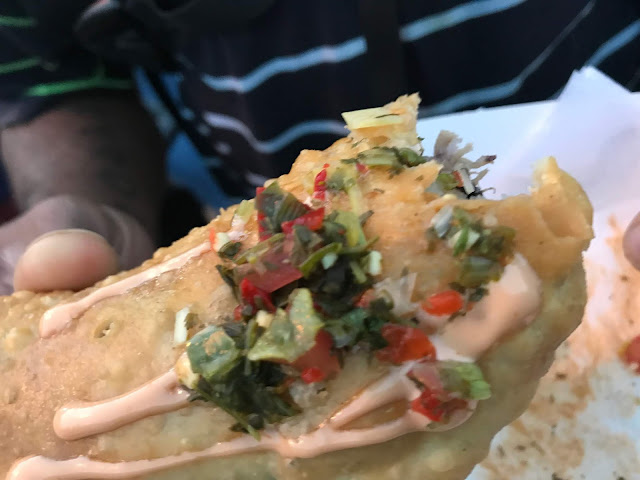 Sweet and Salty Empanadas - You can never go wrong with an Empanada! Growing up in Corona, Queens they'd be our go-to for a quick bite and even now when visiting our parents, heading to Flushing Meadow Park or running around to do shopping at Queens Center Mall or Junction Blvd. 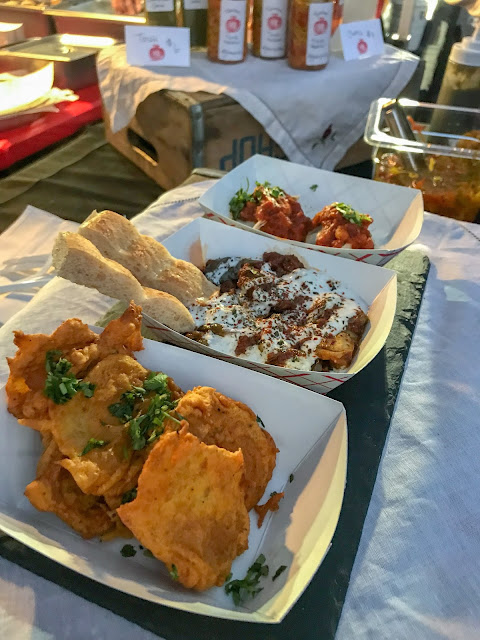 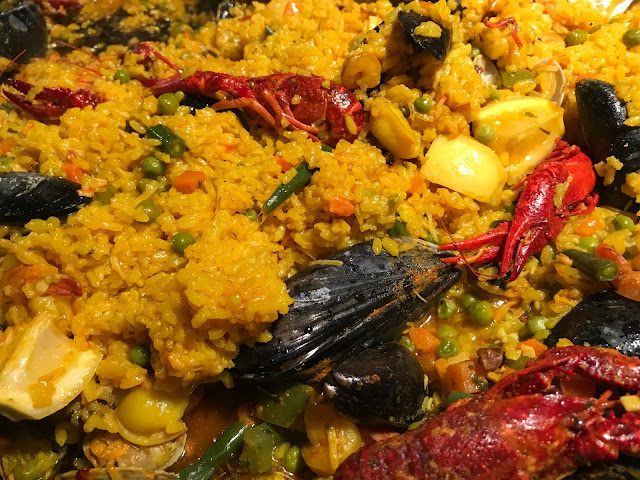 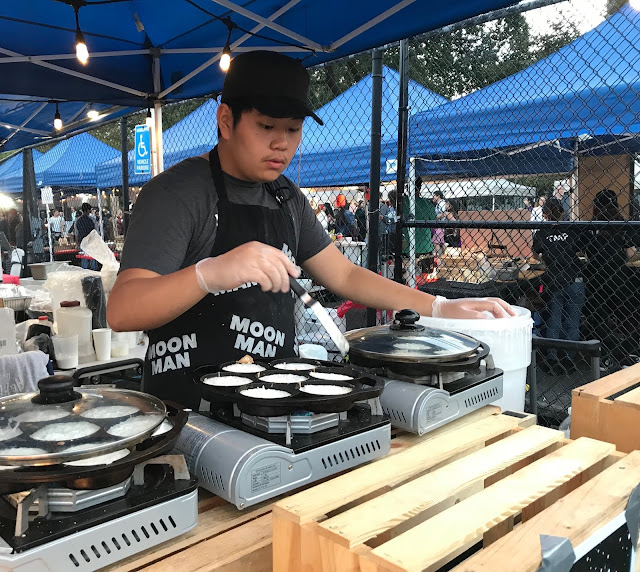 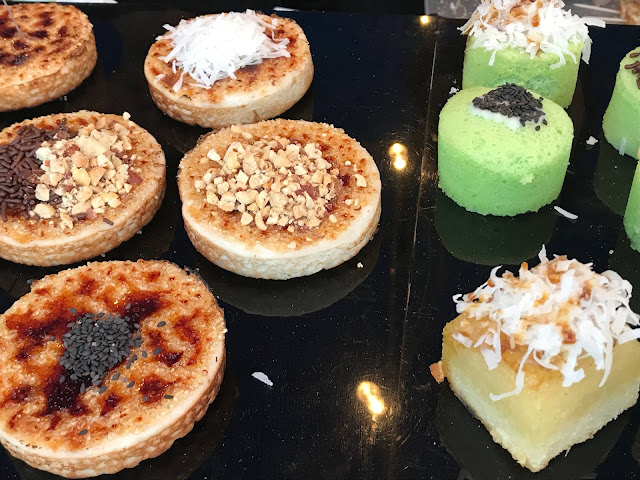 Moon Man - Specializes in modernized street food commonly found in south-east Asia, the sweet smell of their coconut pancakes really drew me in to check it out and their pandan cakes looked so fluffy and too pretty to eat. 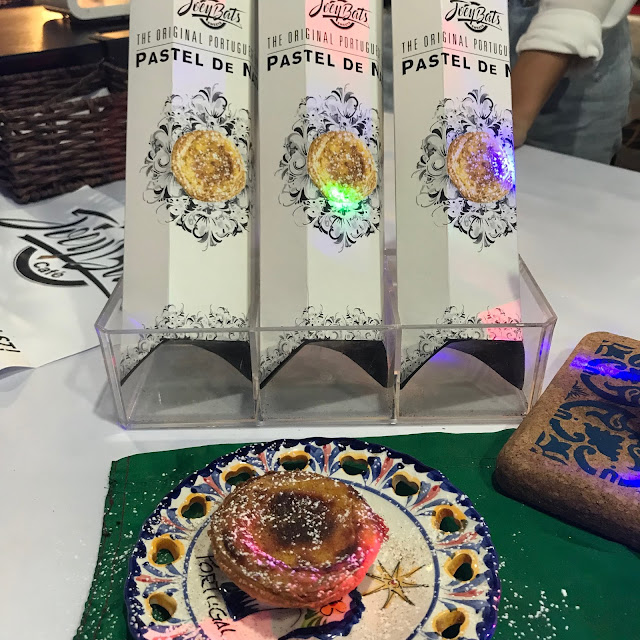 Joey Bats Cafe - Say whaaaat?? Creme brulee wrapped in a croissant sounds like heaven on earth, doesn't it? It was later on in the evening that we discovered these, so I was too stuffed to try it out but it's on our list for the next visit. But you can also buy them online! 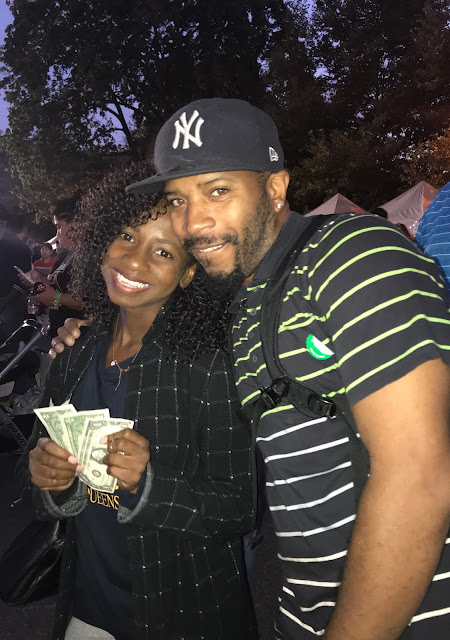 By nightfall, you better believe the hungry crowd will grow by the hundreds every night. If you arrive after 7pm be prepared to stand in long lines, a friend of mine who'd gone in the past suggested that we split up and try to tackle buying food faster. Don't forget to bring cash, but if you do no worries, you won't starve because there are 2 ATMs on site. 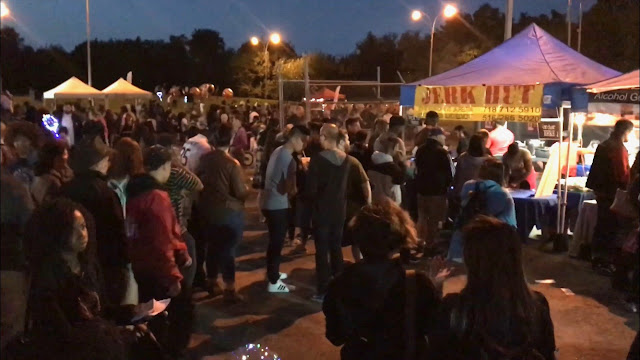 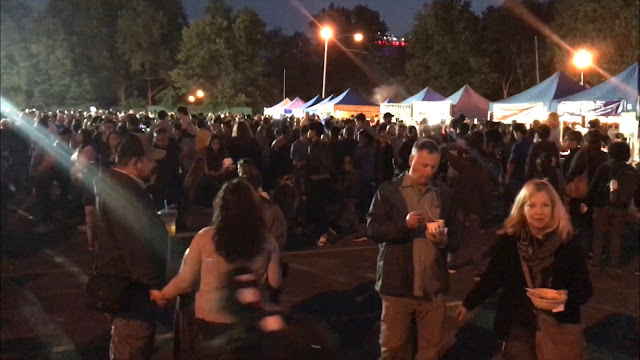 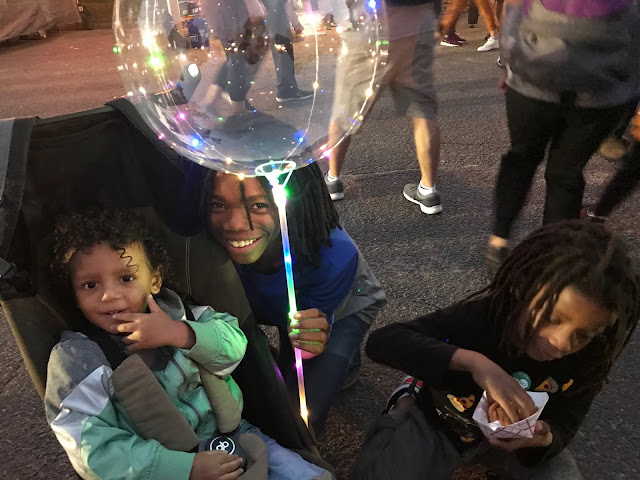 4. KEEP KIDS OF ALL AGES ENTERTAINED
Of course, the goal is to stuff your face while there, but there are a few ways to keep the little kids and grown folks busy. You'll find an assortment of vendors selling everything from neon-lit balloons and toys to jewelry trinkets, t-shirts and wellness products. 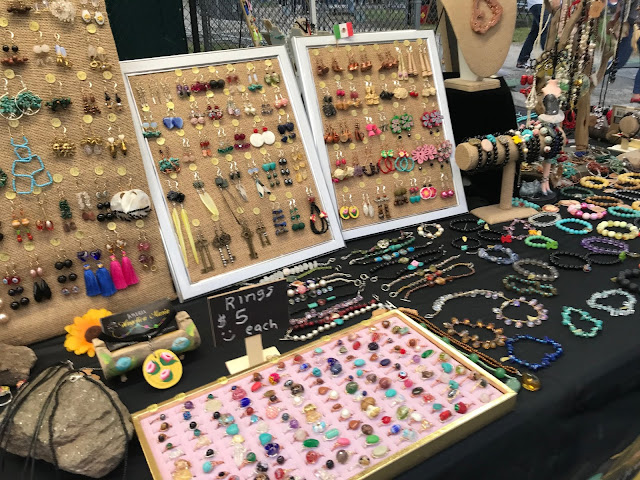 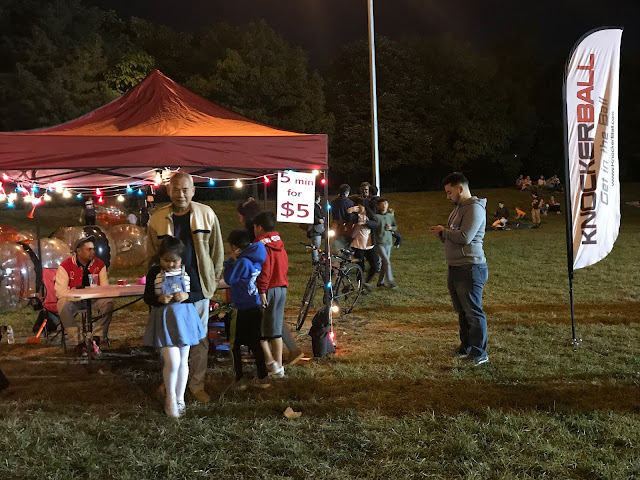 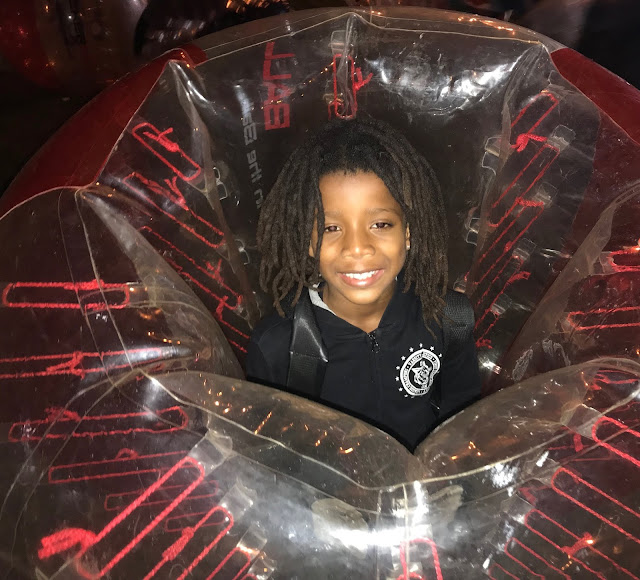 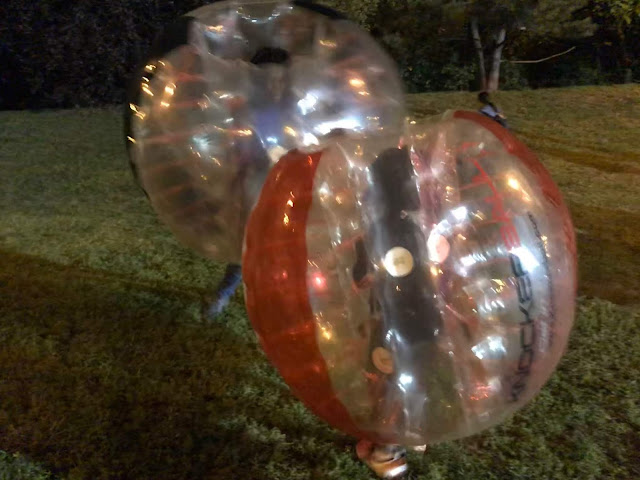 I wouldn't advise Knockerball after just chowing down, so make sure to try it early on or leave some time between taste testing and rolling around in these inflatable balls. I guarantee the fun experience will help work up an appetite and have you all cracking up at how silly everyone looks being knocked around the hills of the park. I'm not going to lie, I couldn't stop laughing at my 8-year-old flopping around, of course until his big brother took it too far by bumping him harder than expected. You've been warned! 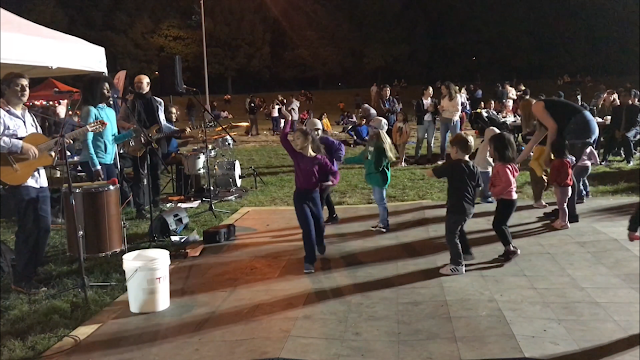 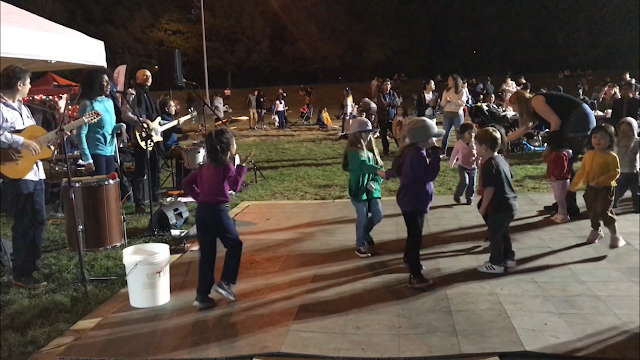 Aside from globally inspired eats, the Queens Night Market also has an incredible line up of performance artists and DJ's who will hopefully have you burning off some calories on the dance floor. The night we went the mini foodies were showing off their carefree moves like nobody was watching and seemingly not caring if anyone was.

Have you been to the Queens International Night Market before? Who are some of your favorite vendors? If you've never been before, what are you hoping to try? Don't Forget to Pin these tips to have on hand when you visit! 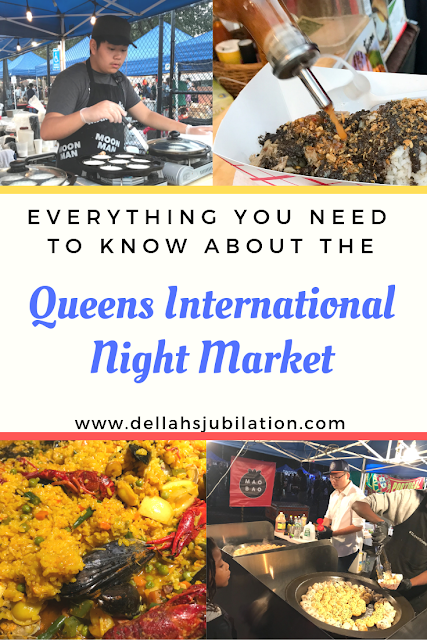