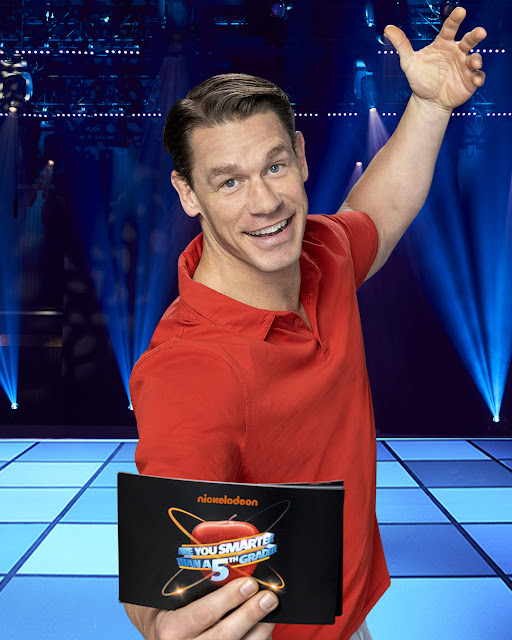 "You Can't See Me" is WWE superstar John Cena's infamous tagline, but it's the furthest from the truth because we can see him practically EVERYWHERE these days. From mainstream movies on the big screen to commercials w/ our favorite household brands on the small screen and even a children's book about a little monster truck with guts, the professional wrestler and actor has been solidifying his career outside of the ring as rumors swirl about his retirement. Nickelodeon is launching the family fun game show, Are You Smarter than a 5th Grader, with a week of premieres beginning Mondy, June 10th, at 7:00pm. (ET/PT). Hosted by John Cena, who also serves as executive producer. We love this show and play kids against grownups while tuned in and can't wait for the revamped series to start!

As a mama to a 3rd grader and 8th grader, I can whole-heartedly admit that even with a bachelor's in forensic psychology and a thesis class shy from my masters in elementary education, common core math can seem beyond freaking confusing! The new series follows the original premise of kids helping adult contestants put their knowledge to the test with questions taken directly from an elementary school curriculum.

We're a little bias and plan to keep an eye out for our hometown favorite, Chloe from Queens, N.Y.

In an all-new format that places kids in the center of the action, Are You Smarter Than A 5th Grader contestants must revisit the classroom to answer six questions on a variety of subjects from the first through fourth grade, before moving on to the final round where they must race against the clock to answer five questions taken from the fifth grade. Each time the contestants answer questions correctly, their bank increases with a possible winning of $100,000. Newly-added elements to the show include an additional “cheat” option and new ways contestants can enlist the help of their grade-school classmates.