Review of Paddington Gets in a Jam: Early Lessons of Good Intentions When Moments Get Messy! 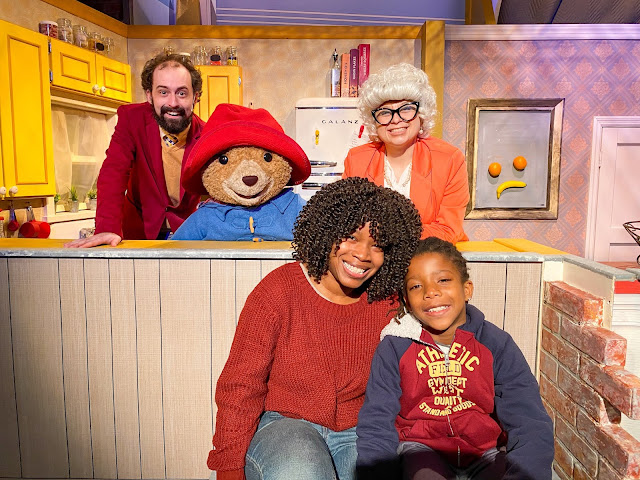 For more than 60 years, British-born writer Michael Bond has delighted children and families all over the world with his stories about Paddington. Growing up he was one of my fave storybook bears, alongside Courdoroy and of course Winnie the Pooh and over the years I've loved sharing his sweet tales with my two boys and now my preschool-aged nephew.

Paddington’s adventures have been adapted many times for the big screen and television, which now includes an adorable new Paddington TV series that recently launched on Nickelodeon and a third feature film is in the works.

We've always got an eye out for theater experiences that the younger kids will enjoy and thought that the new show and New York Times Critic's Pick, Paddington Gets in a Jam at DR2 theater would be the perfect performance for my sister and I to take the kids to. When the winter months roll around we look forward to trips into the city that get us out of the apartment and give the Lil' monsters a chance to witness engaging storytelling that effortlessly captivates their wildest imaginations.

Disclosure: We were provided with complimentary tickets in order to facilitate this review, opinions expressed are 100% our own. 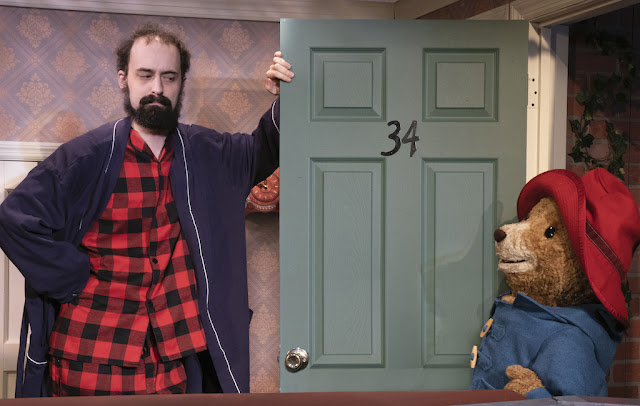 In this original slapstick comedy "Paddington gets in a Jam", the infamously friendly bear decides he wants to learn how to make his favorite sweet treat and goes next door to borrow a cup of sugar from his neighbor Mr. Curry, who seems to be in a panic because he’s expecting a visit from his Great Aunt Matilda. Like the charming bear that he is Paddington volunteers to help Mr. Curry with his to-do list before her arrival.
Throughout the afternoon Paddington attempts to complete the chores – repair the pipes in the bathroom, vacuum the floors, install new wallpaper, bake a cake…. But in true Paddington fashion, things get a little chaotic. 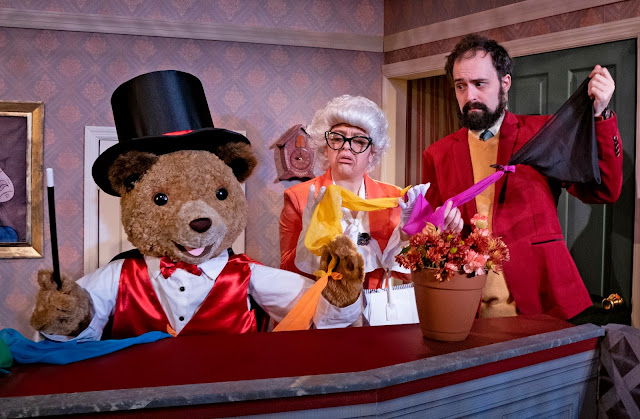 Created by the ultimate children's show production pro, Jonathan Rockefeller (I can't believe the boys were ever so little, but we really enjoyed his adaptation of Eric Carles The Very Hungry Caterpillar)  and written by Doug Smiotek, Paddington gets in a Jams brings the iconic storybook character to life in a really adorable way. With such child-like qualities, it was so sweet watching how with the best of intentions Paddington tries to be a good neighbor by volunteering to fix things up, but can he get all of it done before great aunt Matilda arrives?

As a mom, I remember countless moments when the boys would ask to help clean the living room or wanted to prove they could handle whipping up breakfast like their daddy and would end up making more of a mess then they or I could ever imagine. Paddington gets in a Jam reminds me of those days when my kids were younger that truly tested my patience and despite some of the unavoidable mishaps, there were unexpected lessons, infectious giggles, and priceless memories created in those innocent messes. 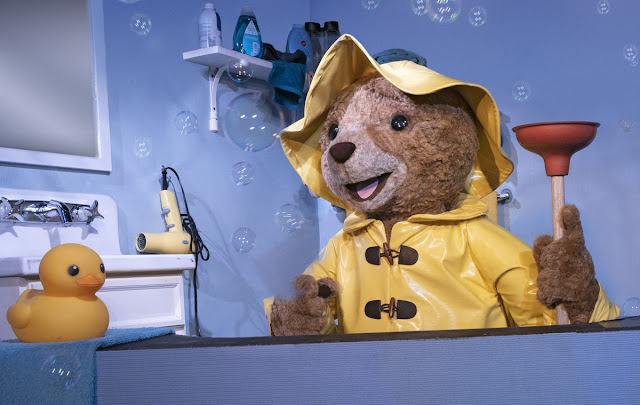 The set design is filled with eye-catching, vibrant colors that warm up the intimate theater, and has a layout that allows the human actors and the Paddington puppet to easily move from one room to the next in a way that makes it simple enough for little ones to follow along for an entire 60 minutes. Like most Rockefeller produced shows little ones won't feel overwhelmed by crazy bright lights or extremely loud sounds that may actually hinder their enjoyment.

A really special part of this show is that the team of impressive creatives manage to make the performance a lot of fun to watch regardless of how old or young at heart you are. A preschooler a few rows in front of us kept pointing and bouncing out of his seat while calling out for the ducky that I'm sure reminded him of his own rubber toy at home.

Paddington's silly antics really reminded me of the crazy things that the American storybook character Amelia Bedelia would get herself into. There were times when I'd hear whispers of questions being asked from children to their grown-ups or shouts of excited warnings when they realized that Paddington was in the midst of making a mistake.

With a positive attitude, a few quick costume changes and an emergency made marmalade sandwich for motivation,  Paddington reminds us that "it always helps to look on the bright side" and “In order to do a good job, you must first look the part”.

I promise you there'll be no shortage of laughter from the audience, I looked over and could see my own tween shaking his head in disbelief during the bathtub scene that he said was his favorite. You'd never guess that such an incredibly charming bear could get into so much trouble all while warming your heart and bringing big bear grins to your face. 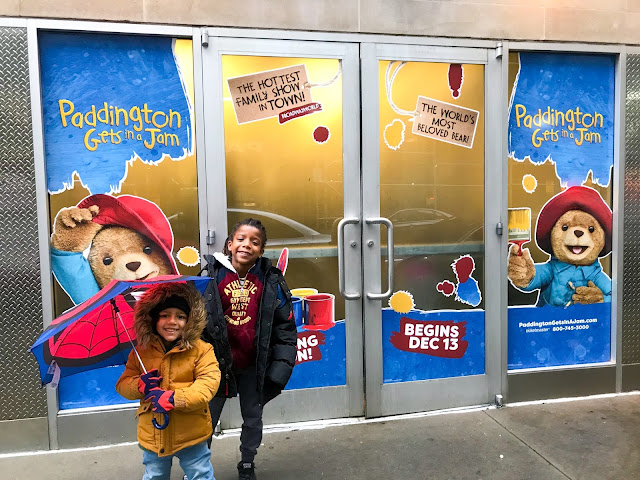 What to Know Before You Go:

Target Audience: Ages 4-9 years old (My nephew will be 4 in a few weeks and Tristan is 9)

Showtimes: Shows are every Friday at 10am and 4pm and Saturday/Sunday at 10am, 12pm and 2pm. 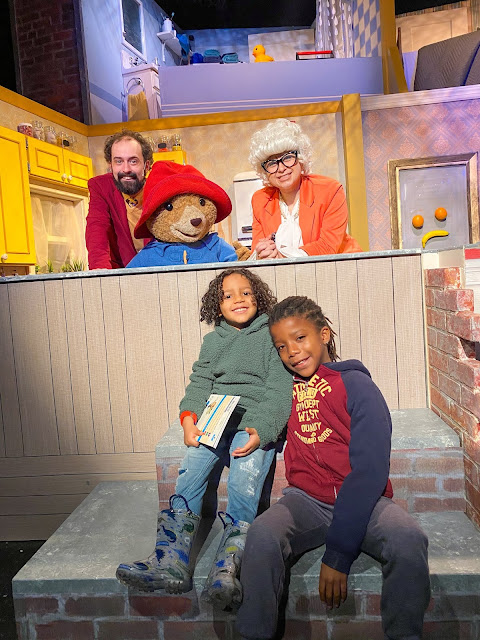 Tickets: You can choose from (4) Ticket Options
- Standard tickets with several great viewing options.
- Premium tickets that come with a post-show photo opportunity.
- VIP tickets are the best seats in the house, come with a post-show photo opportunity and special merchandise. Take a look at our meet and great with Paddington and the cast.
- Lap seating for children ages 12 months or younger.

Paddington Gets in a Jam runs through March 8th, 2020 in NYC before heading to Toronto and then back to the U.S. Pin this post below as a reminder to grab your tickets and enjoy! 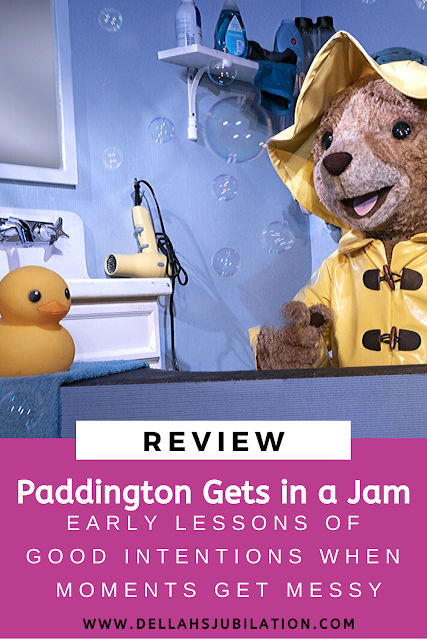