Sonic the Hedgehog Movie Review: Does Paramount Ring in a Win with Nostalgic Gamer Fans and Gen Z Kids?

Last April we all dang near lost our minds with the original release of the Sonic the Hedgehog movie trailer and sent Paramount animators back to the drawing board well before fans of the popular gaming brand rioted. We applauded the studio for listening to their super fans who championed a redesign and were rewarded with a better suited and Puma laced up CGI animated character that resembled the icon we've all grown up with.

Back in the day I remember playing endless rounds of the game with my younger sis and brother, trying to skip to my fave levels with cheat codes ( who else had that up, up, down, down, left, right, A, start memorized?) and binge-watching the cartoon series with a bowl of Lucky Charms in hand. Expectations were high and I was excited to share this cinematic experience with my sis and our preschool, tween and teenaged boys who've become lovers of the brand.

With the Paramount film releasing in theaters this Friday, February the 14th, my two Gen Z kids and I agree a movie night would make for the perfect Valentine's day family date. As long time players of the 30-year-old SEGA franchise, we were visually soothed by the much-needed overhaul and couldn't wait to share our trailer reaction while counting down to the advanced screening we attended this past weekend. 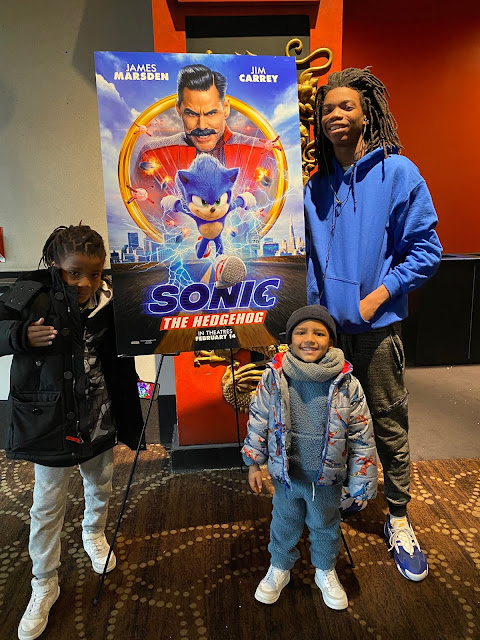 There's certainly a lot at stake for Paramount who I'm sure is hoping to bring in big bucks at the box office after some lack-luster reviews of last year's family-friendly roster of flicks: Wonder Park, Dora the Explorer and the Lost City of Gold and Playing with Fire. Listen, we actually saw and enjoyed those movies and took them for what they were, entertainment and family time with my kids. Every movie released isn't going to be an Oscar-nominated hit but that also doesn't make them trash. The Sonic the Hedgehog movie could be their 2020 redemption film that would bring a bit of nostalgic freshness to multi-generational families like ours and hopefully open the door to a few entertaining sequels and cool product launches.

Directed by Jeff Fowler, “Sonic the Hedgehog”  the movie opens up with a quick glimpse into our mini blue hero's (voiced by Ben Schwartz) origin story in an alternate universe.  We find Sonic trying to flee his world as he's instructed, in order to hide from masked bad guys who want to take his super-speed powers. With a satchel of magical rings that are used as portals to transport himself to other worlds, Sonic's able to avoid the threat of being discovered by warping off to planet Earth and a small town called Green Hills. I thought it was such a cute tie in to have it named after the first level zone in the 16-bit game where Sonic kicks off his adventures.

After moments of loneliness and an accidental encounter with a small-town sheriff (James Marsden,) Sonic’s presence is exposed to the world when his electrifying speed and superpowers cause a blackout which alarms the government who send out a mad scientist to capture him. The sheriff, Tom Wachowski was just on the verge of leaving Green Hills in hopes of finding a greater purpose but when Sonic's faced with life or death perils he ends up sticking around to help the "blue devil" alien. With lessons on the importance of companionship, these two make this a funny yet heartwarming buddy flick. 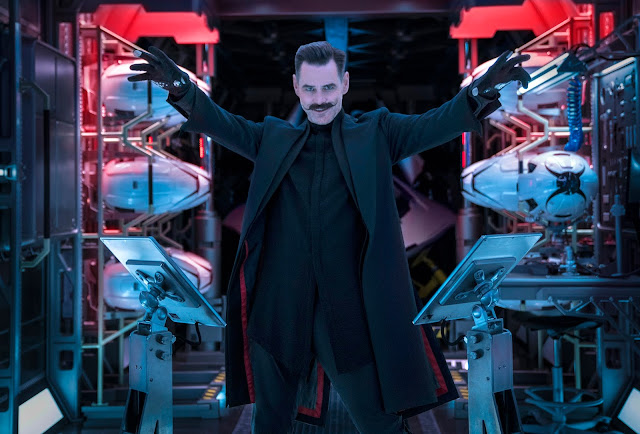 The last family-friendly film I remember seeing Jim Carrey in on the big screen was Mr. Poppers Penguins, how about you? I'll admit when I first saw the news that he was cast for the role of the megalomaniacal Dr. Robotnik I was a bit confused because I just couldn't see it, likely because in the game we aren't given much depth behind the character.

Honestly, the legendary comedian could probably do no wrong and having him play "Eggman" seemed so out of the box it was perfect for an actor of his caliber to make it his own. If you watched him back in the '90s (The Mask, Ace Ventura) then you'll definitely catch glimmers of the crazy, almost spastic mannerisms and movements we've come to know and love Jim Carrey for.

I smiled hard watching one scene that plays out like those final third-stage battle rounds in the video game, we know he's the bad guy but you can't help but like him. Like most villains he seemed to have more layers to him as he mentions being bullied, shows off his wacky dance moves and love of goat milk lattes. More Jim pretty please, he really gave a heck of a comeback performance. 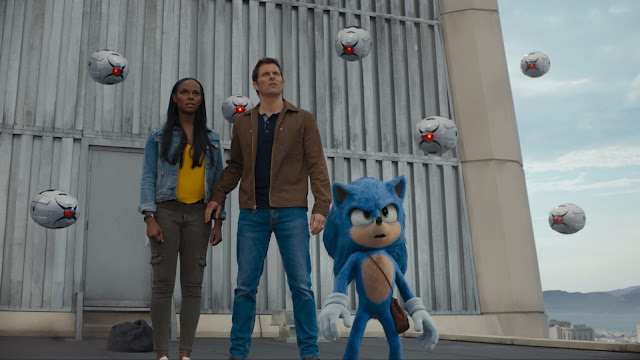 Is the Sonic the Hedgehog Movie for Kids?
Sonic the Hedgehog the movie receives a rating of PG for mild-violence and language. From one of the first scenes, I remember hearing Sonic say " Well this seems a bit excessive" when being shot at and with a preschooler viewing from my lap I kind of agreed. Now don't get me wrong, my threenager nephew is one of the biggest Marvel fans I know and this movie is nowhere near as violent so I guess there's that. Definitely better suited for kids ages 8+ in my opinion.

Since the film is based on a video game, there's no surprise that you're going to have some fight scenes, along with shooting drones, explosions, and whatnot so just keep that in mind if you aren't a fan of exposure to mass weaponry. In the scene pictured above, I personally was a bit startled by the lengths taken by Sonic to save his friends but of course, everyone's fine.

In regard to language, there are subtly implied phrases that will likely go over your kid's heads along with words like "stupid" and "butt" and topped with a few fart jokes but nothing alarming or overly crude.

Whatever you do, don't be that family to get out of your seats when you think the movie's over. Stay till the very, very end, you've been warned!

Overall we're thinking that Paramount levels up with the Sonic the Hedgehog Movie, it's entertaining, Sonic's way cuter now and Jim Carrey is freaking hysterical. True blue gamer fans and Gen Z kids are really in for a good time! Sonic the Hedgehog races into theaters on Valentine’s Day, February 14.

Be sure to check out our list of animated movies releasing in 2020 to see what others you can look forward to this year. 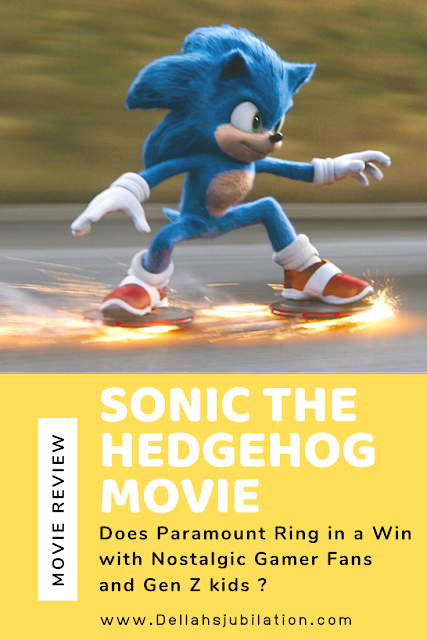