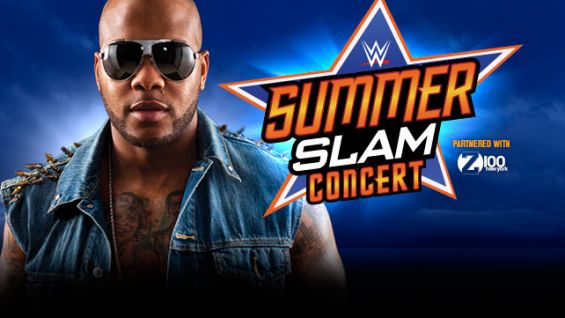 The countdown to one of the most popular WWE pay per views is well under way and in our house, aside from all the revamping of the Monday Night RAW and Tuesday Night Smackdown, Summer Slam is all my wrestling loving family can talk about & with the show headed back to NYC for the 2nd year in a row it's sure to be a night to remember. Can you picture how crazy the energy would be at a fully packed Barclay's Center in Brooklyn, New York in anticipation of a concert with music stars Flo Rida and Jason Derulo as a lead up to to the big night? For the first time ever, in support of Connor's Cure and the initiative to raise awareness and funds for pediatric cancer, the WWE is partnering with Iheart radio for a sure to be epic Summer Slam concert on Thursday, August 18th and tickets are on sale now.

The WWE SummerSlam Concert will also include performances by recording artist Daya and emerging hip hop recording artist Jordan Hollywood, as well as appearances by WWE Superstars Stephanie McMahon, Paul “Triple H” Levesque and more.
A portion of proceeds from the concert will benefit Connor’s Cure and be distributed to leading research centers and hospitals nationwide. In 2014, Connor’s Cure was created by McMahon and Levesque as a fund within Children’s Hospital of Pittsburgh Foundation to support pediatric brain and spinal cord cancer research. Earlier this year, WWE and The V Foundation announced a partnership to expand Connor’s Cure outside of Children’s Hospital of Pittsburgh Foundation and support cancer research nationally.


"I’m definitely honored to be a part of this spectacular event with my WWE family,” said Flo Rida. “They have been there from day one and I truly appreciate the opportunity to perform for all my WWE fans."
“We are proud to bring together some of the biggest names in music and entertainment for one night to support Connor’s Cure,” said WWE Chief Brand Officer Stephanie McMahon

Connor’s Cure was established in honor of 8-year-old WWE fan Connor Michalek, a patient at Children’s Hospital of Pittsburgh of UPMC who battled medulloblastoma, a rare tumor that affects the brain and spinal cord. To date, Connor’s Cure has raised more than $1 million and assisted more than 100 families around the world.

This first for the WWE Universe is sure to be a tremendously awesome way to get excited for the upcoming Summer Slam, don't you think?