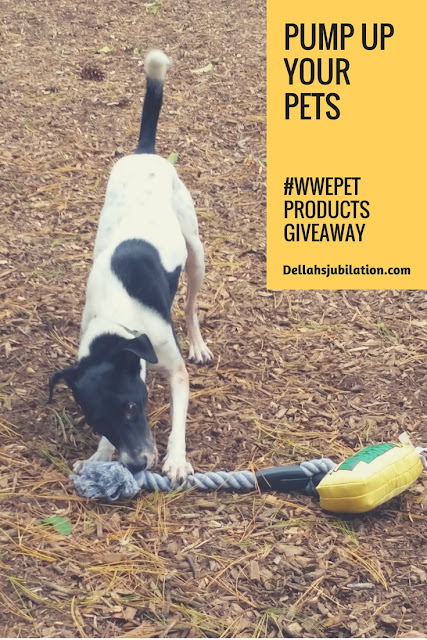 You can just call us die hard WWE wrestling fans, I grew up watching it as a kid when it was the WWF up until High School and now that I have two boys who found an interest in it all on their own, the brand truly a part of our every day life. During the week we countdown til' RAW and Smackdown and catch up on episodes on Hulu the night after it airs.We are subscribed to the WWE Network to cheer on our favorite over the top Superstars and try to catch a  live show any chance we get whenever they are in town. WWE fans can now share their passion with their pets as Petmate announces the launch of its new collection of WWE pet products available at retailers nationwide.

Disclosure: We were provided product to facilitate this review, opinions expressed are 100% our own.

When we first went out looking for a puppy to adopt at North Shore we new it would need to be one with lots of energy to keep up with the four year old son we had and any future kids that would love all over him and want to play with him for hours. The smooth Fox and Jack Russell Terrier mix that chose us, lives up to his name that CJ gave him after his favorite super fast video game character "Sonic" the Hedgehog. We had no idea of his speediness prior to bringing him home but his name clearly was the perfect match. If you get Sonic all riled up you'll notice the extra pep in his step as he practically prances, or rather bounces around the yard like a jack rabbit. And don't try to challenge him to a race because he'd go down in history for the best juke as he out runs every other breed in the doggy park. We've had Sonic since he was 7 months old and now he's almost 8 years young.

Since adding to our family, our now 6 year old Tristan loves having a dog especially if there's they rare occasion that the old pooch is willing enough to play. He's not as young as he used to be so Sonic may where himself out after 10 minutes or so, but it's so important for him to get exercising. 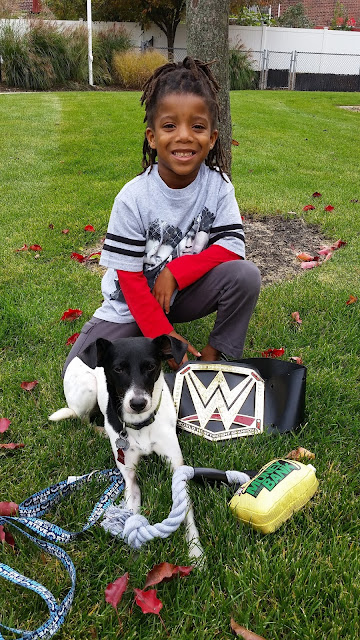 “There are more than 68 million American families devoted to their pets and you can count WWE fans among those passionate pet lovers,” said Chris Wilson, executive vice president of marketing and new product development for Petmate.

The new collection features iconic pet beds, fan favorite collars and leashes, and assorted rough and tough rubber and plush toys, capturing the excitement of WWE.  Showcasing the brand’s mega-themes and fan-favorite Superstars including WWE Superstars John Cena and The Rock, and WWE Hall of Famer Stone Cold Steve Austin, the collection is now on pet store shelves near you and online at PetSmart.com, Amazon.com and Walmart.com.


“The Superstars and iconic symbols of WWE translate extremely well into these new innovative quality pet products that appeal to all fans.” We can totally vouch for Chris Wilson's statement because John Cena, The Rock and Stone Cold are legends and if you've ever seen the three of them together in the ring you know there's just amazing energy that bounces and plays off each other. An energy so entertaining that it would have you jumping out of your seats. Petmates is also offering great exercise tips to encourage pet owners to Pump up their Pets to keep them energized, healthy and happy! 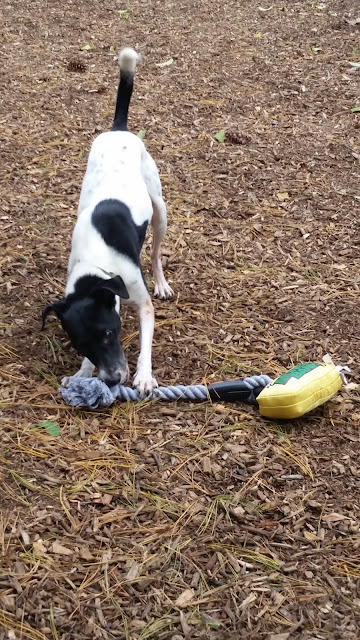 Sonic had a blast with this tug toy and we know this because he actually barked and growled. He only ever makes sounds when he's excited and happy, at home he's so quiet you'd never even realize we had a dog. 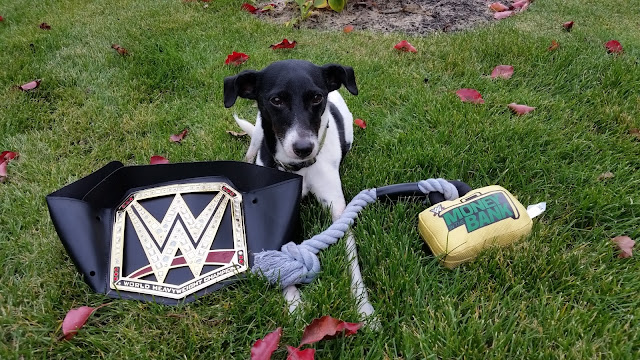 WWE Championship and Diva Belt Tug - $14.99 {not pictured above, my 6 year old thought he needed a championship belt in the pic though, lol}

WWE Money in the Bank Tug - $10.99
Designed for tough tug play between you and your dog, or for two dogs to wrestle and tug together. 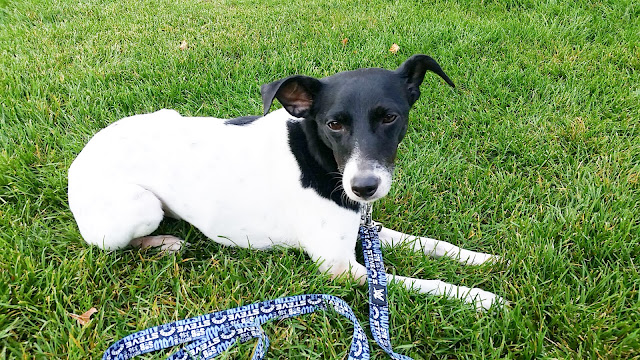 Couldn't he be a doggy model? We are hoping that they come out with a few more stylish leashes, like one for Roman Reigns, The Undertaker or Finn Baylor. 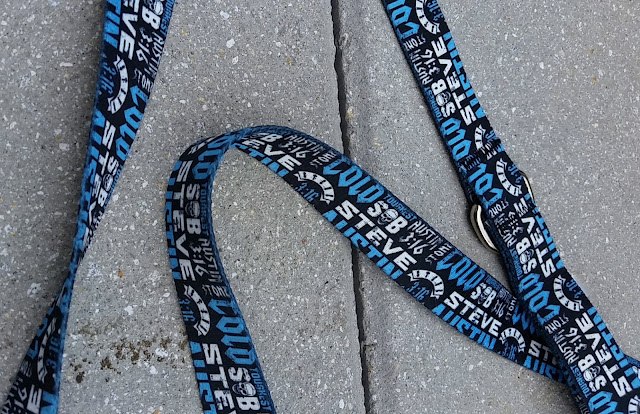 WWE Adjustable Collars - $5.99 - $9.99
These adjustable dog collars are soft and durable, and feature patterns from your favorite WWE Superstars. 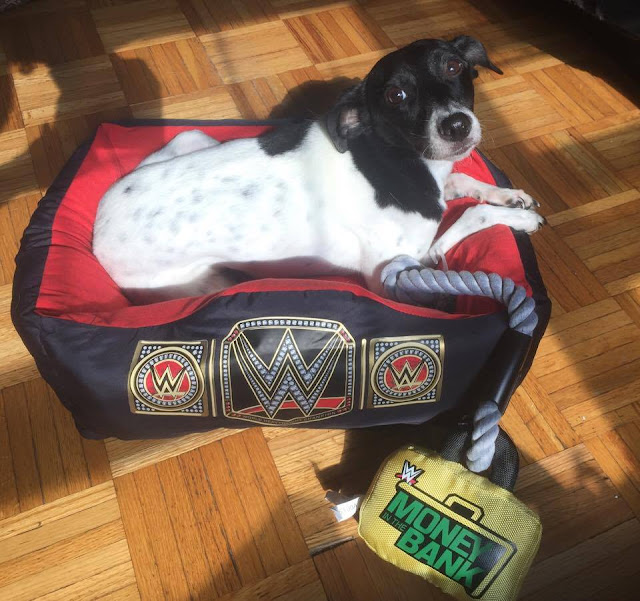 Beds
The WWE World Heavyweight Championship makes an appearance in the shape of a rectangular lounger for your pet to enjoy after a hard day of play.  Other pillow beds and loungers feature The Rock, the iconic WWE logo and Divas leopard print.  Highlights include:
WWE Pillow Bed with The Rock Logo- $24.99
WWE  Diva Pink Leopard  Pinch Corner Lounger Bed - $24.99
WWE Championship Rectangular Lounger Bed - $29.99
A wide variety of bedding styles for dogs of all sizes who want to feel like a true Superstar. 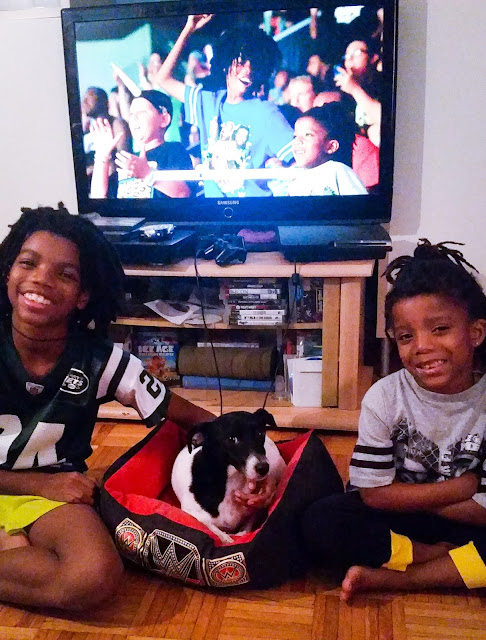 Naturally Sonic is a member of our WWE loving family and after an afternoon of running around the boys always love coming back home to just chill in front of the T.V. to watch the WWE Network. Every now and then they love playing the clip of themselves cheering in the stands of the Barclays center for Summerslam. Sonic loves his bed because he can crawl up into a ball. Does anyone else have a dog that likes to flip their bed upside down before they sleep in it?

We think your furry little friend deserves to rumble and play too and are giving away a few Petmate goodies: The WWE Championship Lounger Bed, The Stone Cold Steve Austin Leash and the WWE Money in the Bank Tug Toy to one dog lover by entering below.

Entry-Form
Posted by Dellah at 7:13 AM