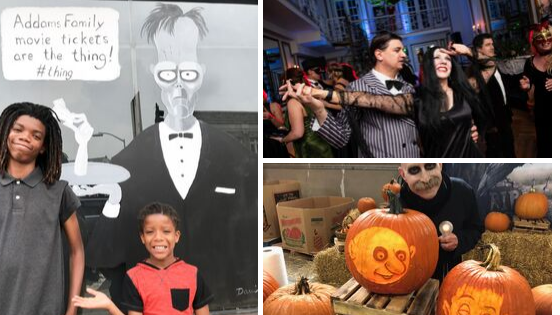 Imagine getting to celebrate Halloween with the creepy and cooky first family of scream, the Addams family in their home town! With their return to the big screen that’s exactly what you can do by heading to theaters for their first animated comedy feature premiering this October. Then, after the movie, take a trip with Lurch to Westfield, New Jersey for AddamsFest!!

Did you know that the creator of the original Addams Family New Yorker cartoons, Charles Addams, was in fact from this quaint yet eery little town in New Jersey? We had no idea and were intrigued by our visit to Westfield to tour where he grew up and see how the native son is celebrated with all the fandom of this iconic television family. 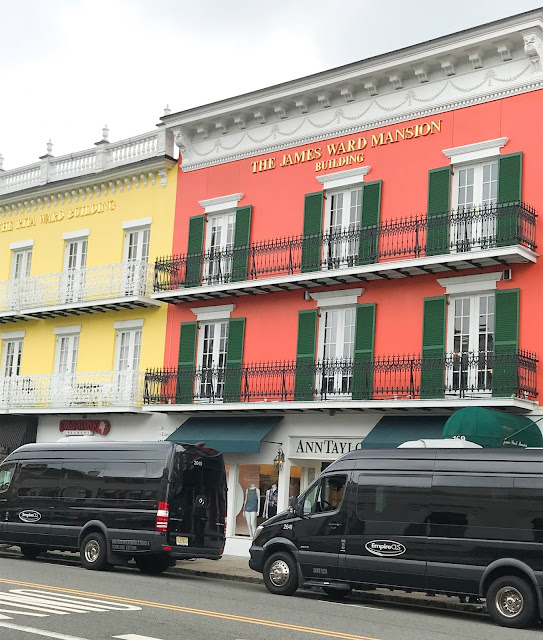 The trip began with us meeting with a group of journalists and bloggers in downtown Manhattan before heading to the charming, suburban, but still modern town of Westfield, NJ, which is home to approximately 30,000 residents. All of the older kids on the trip kept comparing it to Hawkins from the Netflix series Stranger Things. I guess because it has a natural curious vibe to it; too cute and charming to not also creep you out. 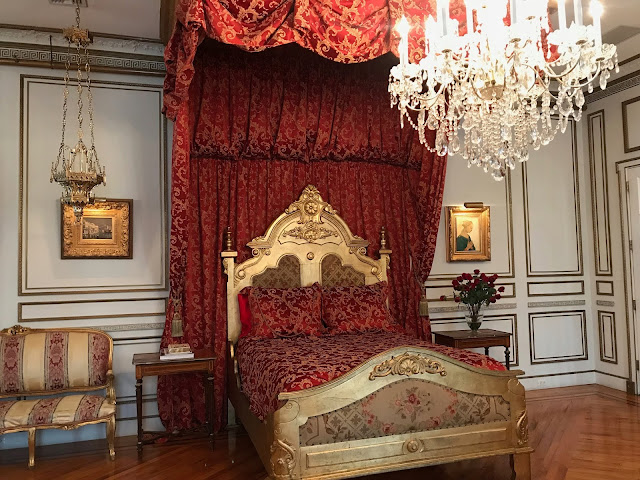 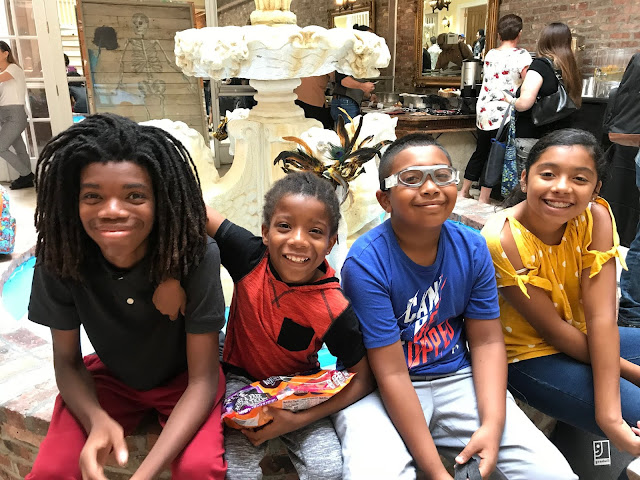 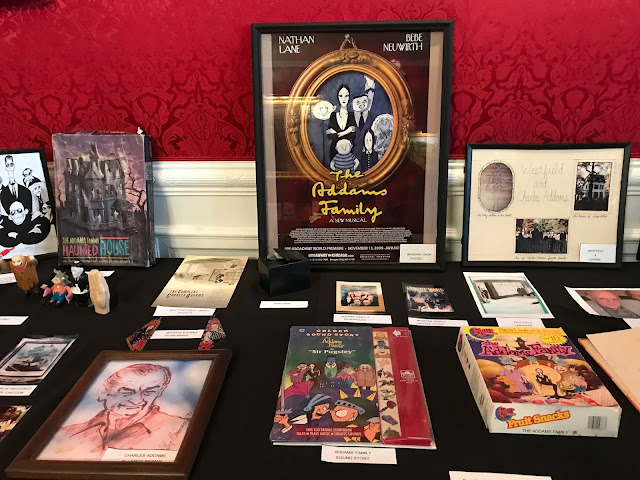 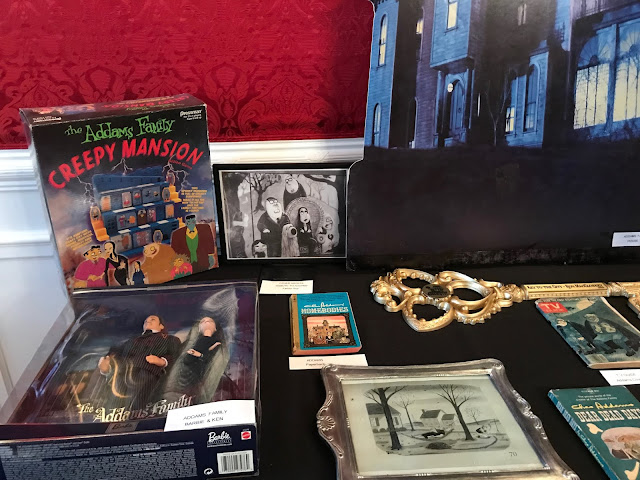 Our first stop on the tour was the absolutely stunning James Ward Mansion, where we enjoyed a continental breakfast while checking out old Addams family memorabilia. It's crazy that they had the Gomez and Morticia collectible Barbies on display because I remember all the craze around them when I bought the set back during my college days as a doll specialist working at FAO Schwarz. That is a classic collectible now. Where did I put my set?! 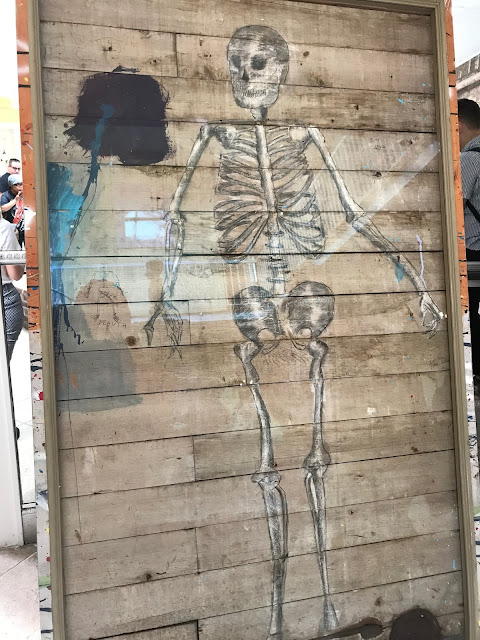 We were also introduced to Dudley - newly emancipated Charles Addams skeleton artwork that was unveiled at last year’s AddamsFest. This life-sized Addams original, drawn during his Westfield childhood spent nearly a hundred years on the second-floor barn on East Dudley Avenue. I’m laughing to myself as I type this because, like most parents, I'm sure you’ve all told your kids not to draw on the walls but look at how talented he was at such a young age and how successful he became because of his natural gift. It almost makes me want to let them break some rules to discover what hidden talents the Lil’ Monsters might have. Current homeowners, the Khichi family, have generously lent this valuable piece of history to the town on a long term basis. 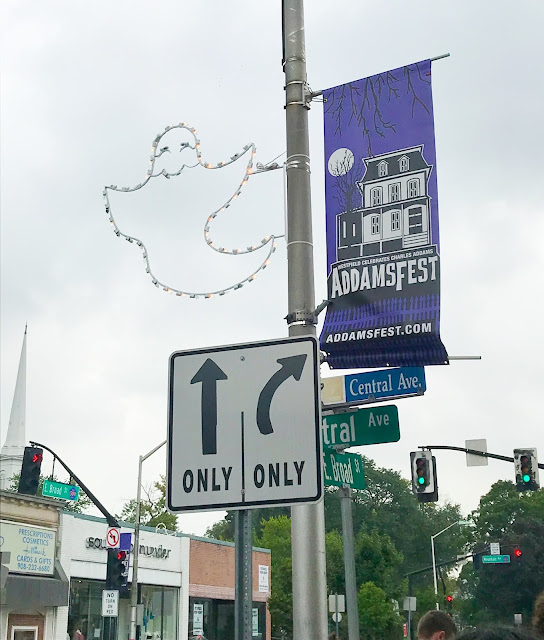 Every October during AddamsFest the town will be transformed into all things Addams with a series of family-themed events, movie screenings, art exhibits and more! During last year's successful inaugural year in 2018, over 12,000 attendees showed up to celebrate and honor the talent and creativity of Charles Addams while decked out in their best costumes.

Considering that, who better than Charles Addams expert, Ron MacCloskey to lead our group on a tour of the town. Having grown up in Westfield and sharing a love for drawing and monsters you could see how much admiration he had for the artist. This led to Ron founding a Charles Addams’ art scholarship and petitioning for Charles Addams’ childhood home to be declared a historical landmark, all while being instrumental in creating the first AddamsFest. 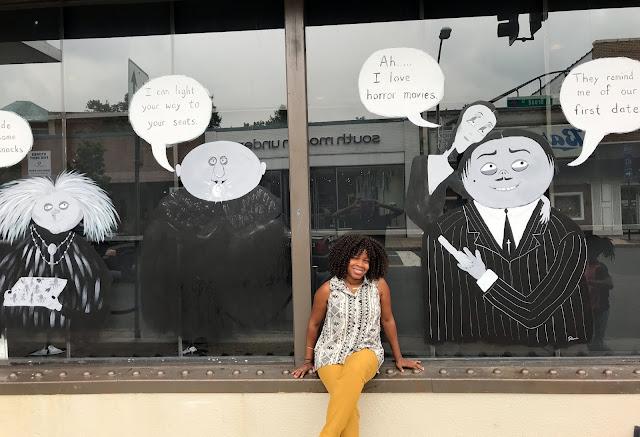 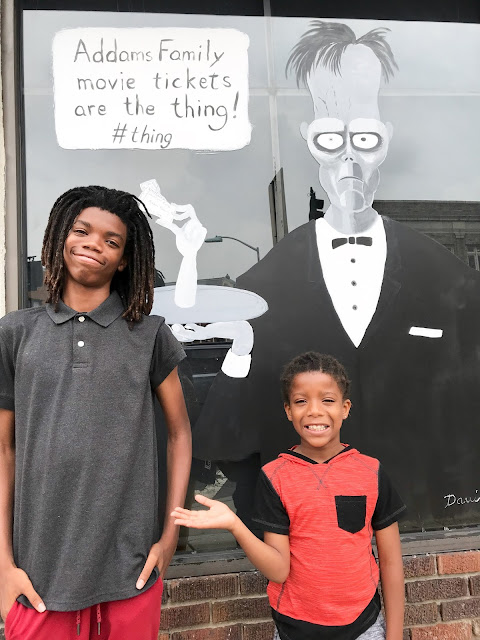 On our second stop, we headed a few blocks down to the Rialto Theatre for a presentation and sneak peek at some unfinished scenes of the movie. The kids loved the painted window murals and thought it was a really cool experience to see parts of the animations still in black and white while other portions were filled in with color. From the portion that we saw, the kids realized that the Addams family, however different from their neighbors, ultimately just wanted to fit in with everyone else. 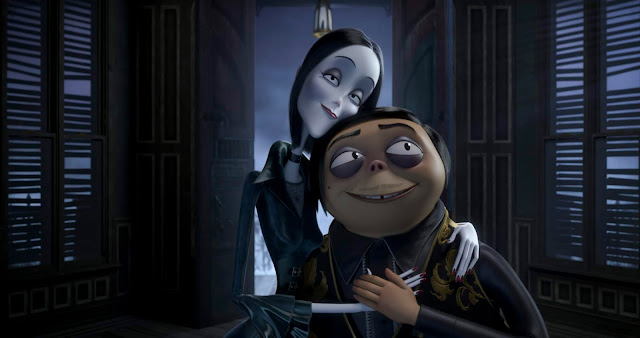 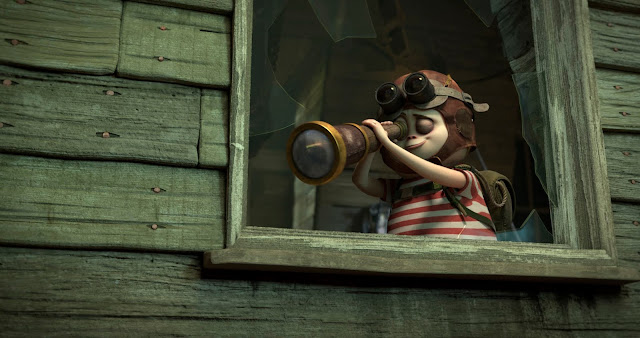 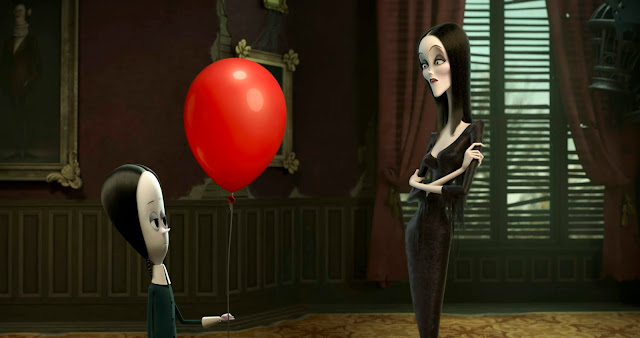 Synopsis: Get ready to snap your fingers! The first family of Halloween, the Addams Family, is back on the big screen in the first animated comedy about the kookiest family on the block. Funny, outlandish, and completely iconic, the Addams Family redefines what it means to be a good neighbor.
CAST: Oscar Isaac, Charlize Theron, Chloë Grace Moretz, Finn Wolfhard, Nick Kroll, with Bette Midler, and Allison Janney. 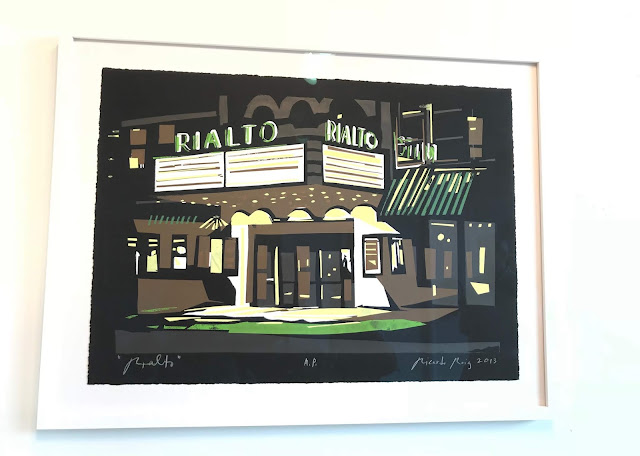 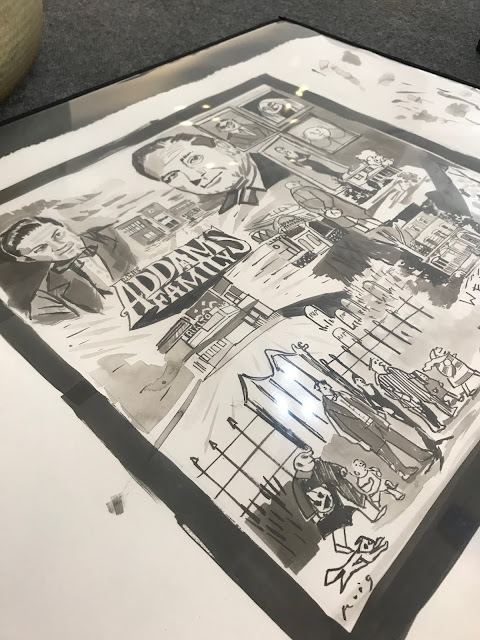 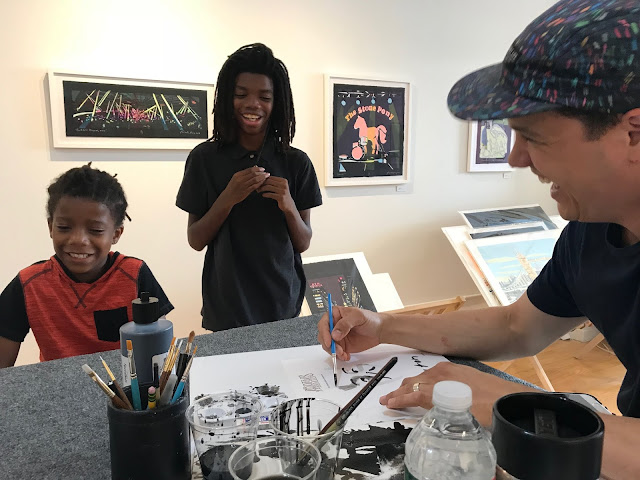 Afterward, we stopped by Roig Collection Art and Framing where we met Westfield native and professional fine artist, Ricardo Roig. Roig is known for his hand-cut prints made using his unique printmaking process. During our visit, he captured many of us in drawings done in Addams Family style. 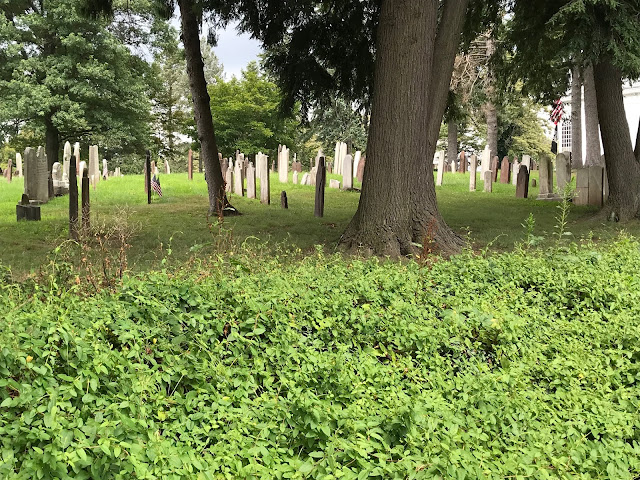 Our next stop was a place that no Addams Family themed tour should be without, their backyard, or what’s better known to us regular folk as a cemetery. With a reputation for having a dark sense of humor, Addams used to hang out at the Burial Grounds of the Presbyterian Church as a child. This was an interesting and odd stop that increased our connection to the mysterious mind of the creator. 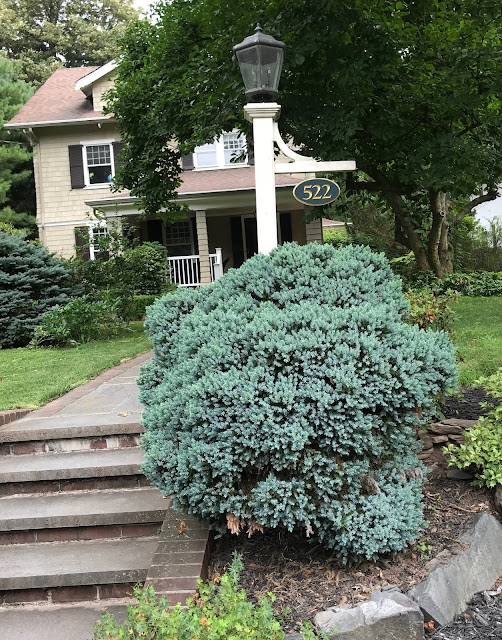 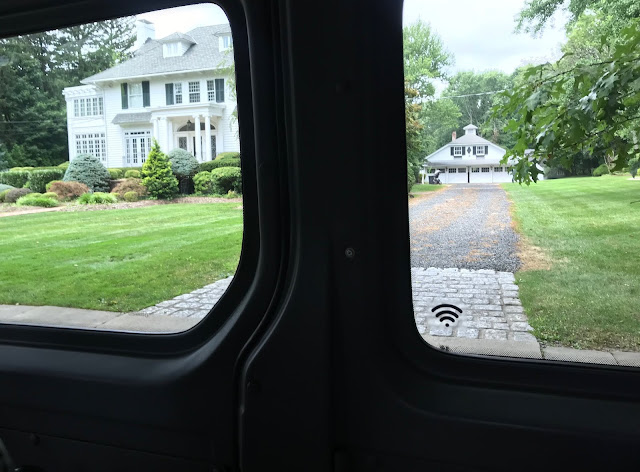 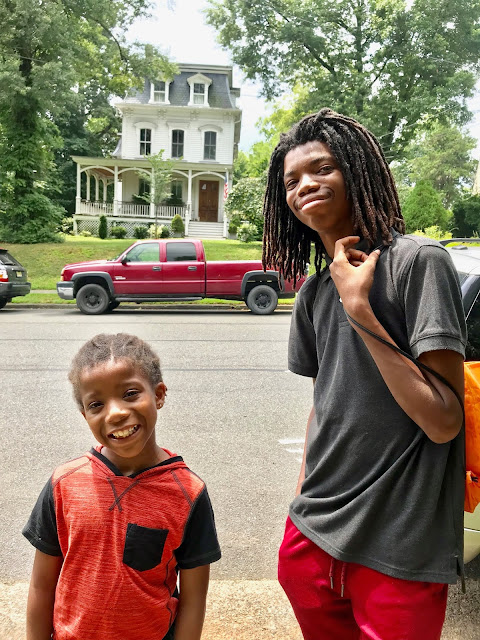 Afterward, we passed by his childhood homes on Elm street and Dudley avenue; both said to be the inspirations for the Addams Family mansion in his cartoon. And if we stopped at his home and his favorite hang out, we definitely had to visit Westfield High School, where he drew the cartoons for their student literary magazine. 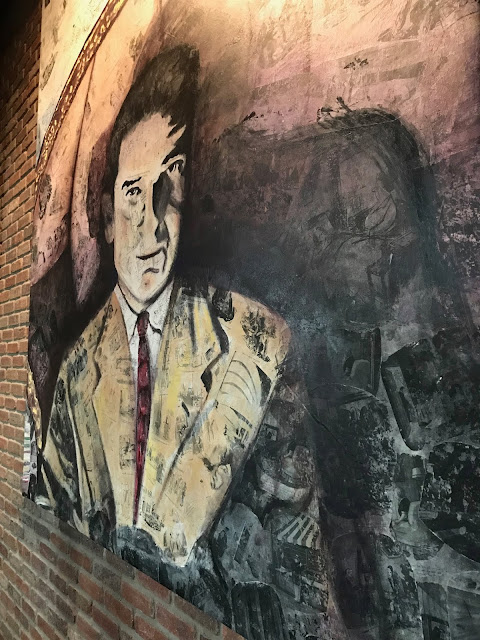 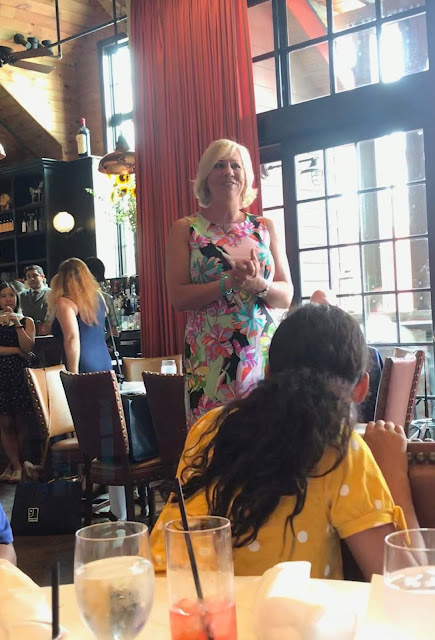 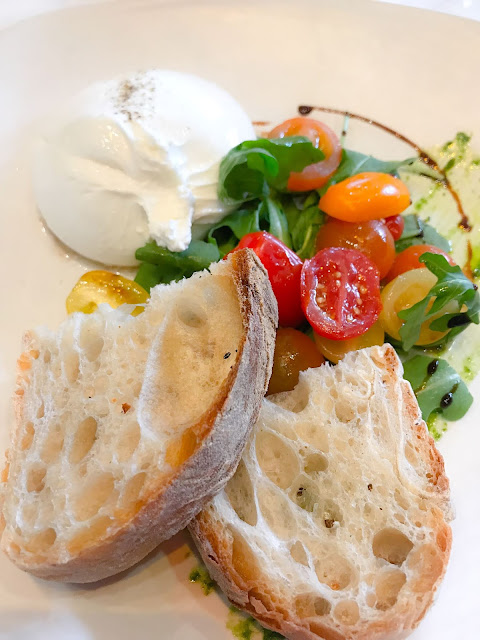 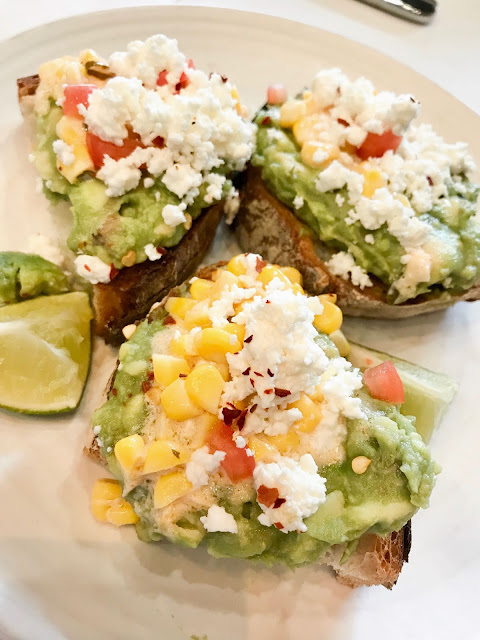 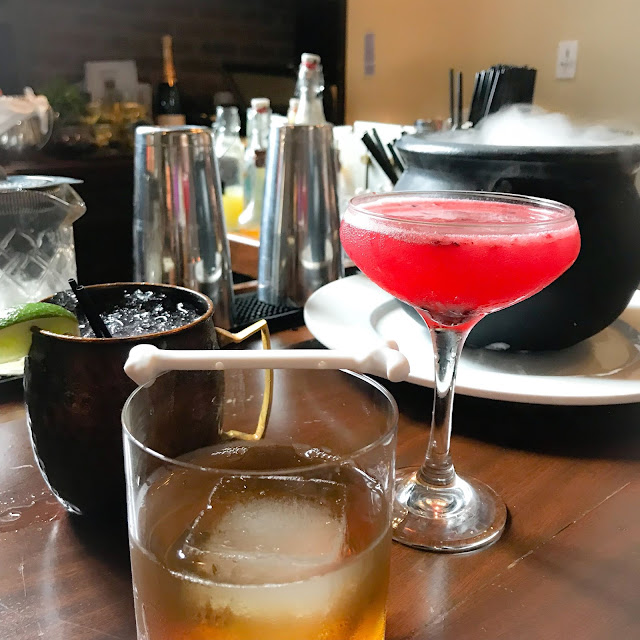 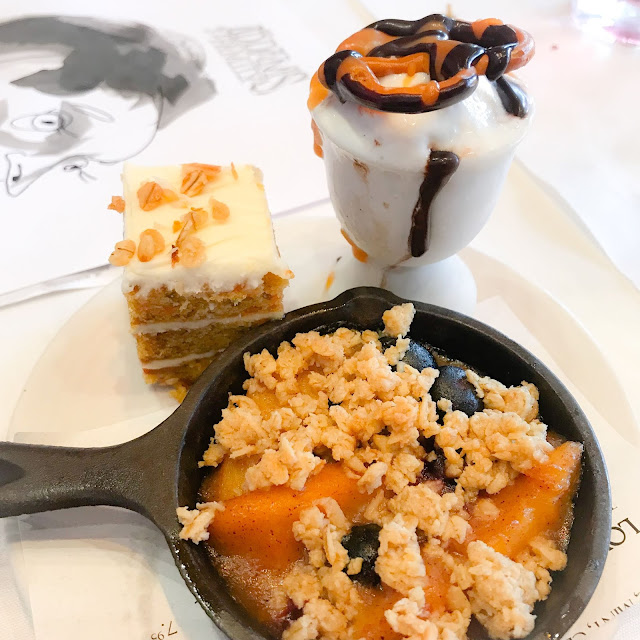 Hosted by Shelley Brindle, the mayor of Westfield, NJ, we wrapped up the day with lunch downtown at Addams Tavern which showcases New American inspired cooking, with fresh fish, grass-fed meat and locally sourced seasonal produce. After all the walking we certainly worked up a thirst and the grown folks enjoyed trying out the various Addams family-themed libations that were so dang delish.

The return of the Addams Family in film and this amazing visit to this town that embraces the strange keeps bringing back memories of my childhood. I remember watching the black and white television series with my grandmother on weekend visits and laughing hysterically with my sissy while watching the films from the 90's. Addams Family Values was my fave because I could relate to moments when I was less than thrilled to become a big sister.

Clearly, I could never get away with half the stuff Pugsley and Wednesday pulled off but it was all pretty funny to watch. And now, without a doubt, Halloween has become one of our fave family holidays. We do it even bigger than most since our youngest, Tristan, has a birthday just days before and we always have a themed costume party to celebrate this fun time of year. It would be even cooler if my 3 guys would give in to my wish to do a family costume, Mike as Gomez, me as Morticia, CJ as Lurch, Tristan as Pugsley & the dogs as cousin It and Thing. Cute, right? Help me convince them!

The Addams Family is an American staple that has entertained us since 1938. They have been around for three generations and with this new release, you can be sure that the Addams Family will continue to be the quintessential American family, of weird!

If you and your family are looking for a really unique way to get into the Halloween spirit, the animated movie The Addams Family will hit theaters this October 11th and AddamsFest will be welcoming ghouls from far and wide two weekends in October, from the 19th to the 20th and then from the 26th to the 27th. Make sure you plan for at least a day in Westfield if you are too afraid to spend the night, as the schedule of events below is quite full and is different for each day of AddamsFest. 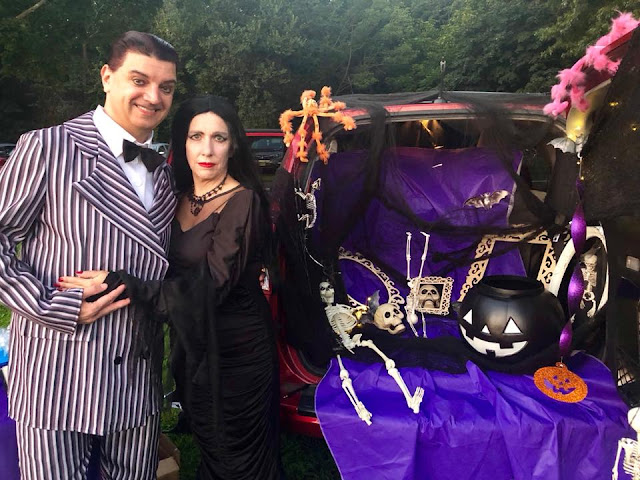 Saturday, October 19th - Morticia and Gomez’s Masquerade Ball
The festivities kick off in high style when Morticia & Gomez Addams host their Second Annual Masquerade Ball. After walking the purple carpet, guests will feast on Charles Addams-inspired gourmet fare, sip smoldering libations, and dance the night away in an interactive setting. Do the tango with Morticia & Gomez – or the mamushka with Fester -- and visit Morticia's aunt for a tarot card reading. Tickets go on sale this Friday the 13th, 2019.

Sunday, October 20th - The Addams Family Fun Zone
Families will get ooky and spooky on Quimby Street as they take in a variety of activities, including character visits, street performers, incredible displays by the Maniac Pumpkin Carvers and a Monster Mash dance party they will never forget.

Saturday, October 26th - Charlies Ale Garden
This year, there’s room for even more friends and neighbors to enjoy a variety of beers and wine, as well as food from local restaurants, as the Westfield Armory is transformed into an indoor/outdoor beer garden with live music.

Sunday, October 27th - Pugsley’s Trunk or Treat
The party is just getting started when the Halloween Parade ends, as the South Avenue train station becomes Trick-or-Treating Central with the Second Annual Pugsley’s Trunk or Treat. Calling all creative minds to register their cars, decorate them with an original theme, and distribute candy from their trunks for thousands of eager trick-or-treaters.

Sunday, October 27th - Gomez’s Dynamite Model Railway
A new addition to the festivities this year,  which will celebrate Gomez’s well-known love of model trains. Join in for exhibitions from both The Model Railroad Club of Union County and the Gersten family, whose small scale model railroad layout was built to represent major Westfield landmarks, past and present. This memorable exhibit is a can’t-miss event for train lovers of all ages!

Don't forget to PIN the post and plan your visit to Westfield for the AddamsFest. 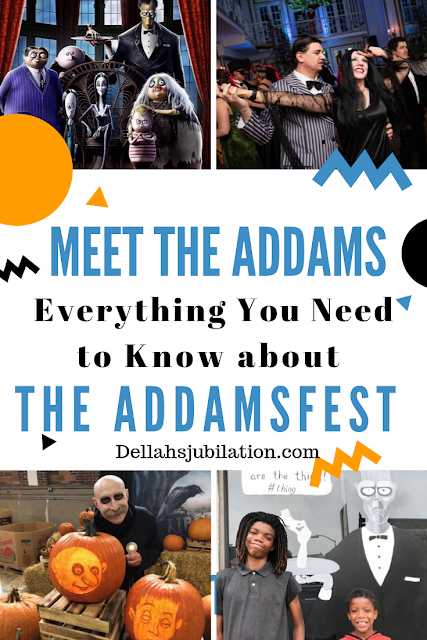 Thank you to the Town of Westfield, Mayor Brindle, Ron MacCloskey and everyone who participated in hosting us for this fun experience.