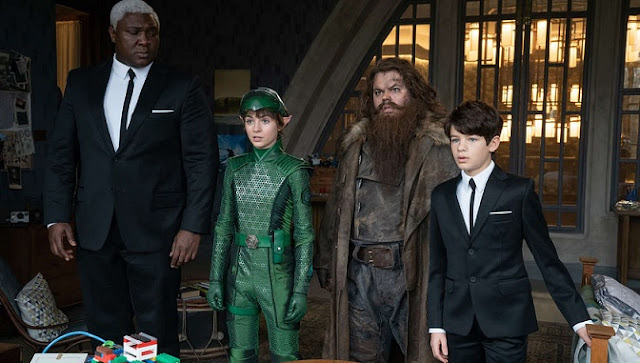 Family-friendly films, wrapped up in mystery and spellbinding adventure are definitely up our alley for movie nights. Last year when I heard all the buzz surrounding Disney's release of Artemis Fowl, I admittedly was intrigued but completely clueless and surprisingly so were my guys. Now that we've watched the movie, we can let ya know if you should watch it or skip it!

We didn't know much at all about the characters or plot which is really a rarity for us, so we had fingers crossed we'd be into Artemis Fowl after recording our trailer reaction video and streaming the movie on Disney Plus. 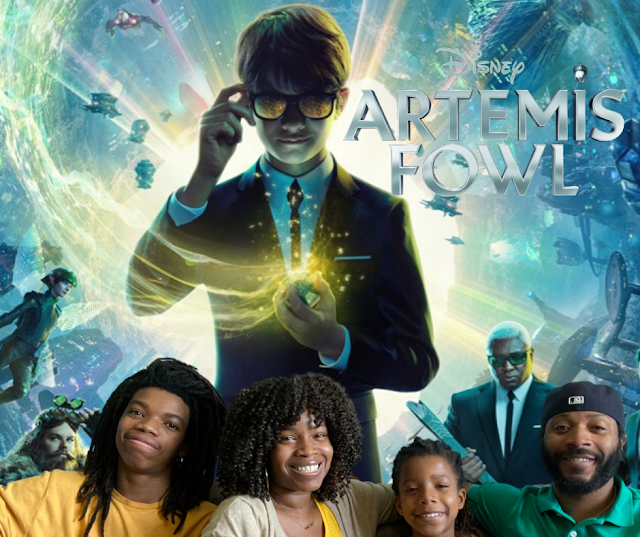 Disney’s “Artemis Fowl,” based on the beloved book by Eoin Colfer, is a fantasy adventure that follows the journey of 12-year-old genius Artemis Fowl (Ferdia Shaw ), a descendant of a long line of criminal masterminds, as he desperately tries to save his father (Colin Farell) who has been kidnapped.

In order to pay his ransom, Artemis must infiltrate an ancient, underground civilization—the amazingly advanced world of fairies—and bring the kidnapper the Aculos, the fairies’ most powerful and coveted magical device.

To locate the elusive object, cunning Artemis concocts a dangerous plan—so dangerous that he ultimately finds himself in a perilous war of wits with the all-powerful fairies. 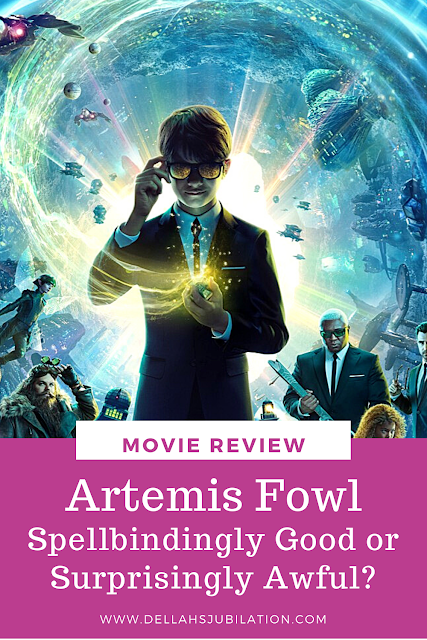 Spellbindingly Good or Surprisingly Awful?
Here's What we Thought + Reviews from Reel Families

Clearly, once Disney changed the release date and then moved the film from a big-screen release in August to an earlier premiere in June on their streaming network Disney Plus, most mega fans took those decisions as a big red flag. So was it any good?

Having never read the books we were completely open-minded to watching and overall on a scale of 10 the boys and I give it a 7, and I'm guessing some of you may feel that's really generous.

Where our teen would give it a 6 and thought it was decent. our tween was pretty eager to say he'd give it an 8 because it wasn't nearly as scary as he thought it would be after watching a creepy goblin shoot fire out of his nose in the trailer.

Would we watch it again? Yeah, why not, it was entertaining just not amazing. It's pretty safe to say, moving it to Disney Plus instead of a full theater release was a smart idea. I'm sure hardcore fans of Artemis Fowl would have purchased tickets to see it anyway but with big expectations would've likely been disappointed, leaving it to tank at the box office.

"What the Four Leaf Clover?!" Here's What We Didn't Like

Thankfully, with limited background knowledge, we could easily watch without any bias but there was a disconnect, it felt like we were missing parts of the storyline.

From what I knew, I thought that young Artemis was supposed to be some sort of evildoer and he didn't portray that all, in fact, he seemed to be more heroic as young viewers find themselves rooting for him.

Which was fine by us, but why depart from such a huge character trait at all? From the movie posters, I was thinking of someone a lot more sinister or darker. At the start of the film, Artemis does come off as a bit of a jerk, but as we move further along his character changes and not necessarily for the better.

Did anyone else get a Men in Black or Spy Kids vibe from watching? If you saw our trailer reaction video, you may have caught Tristan pointing out a snippet of the trailer that reminded him of the Will Smith and Tommy Lee Jones sci-fi, comedy. Between the black suits, the sunglasses, and mind-wiping, it all felt very "been there, done that".

There's also all of the laser-shooting, shiny gadgets and gizmos being handled by sassy and super-smart children, Artemis, Juliet, the butler's niece (Tamara Smart) and Holly Short, a junior fairy (Lara McDonell) who end up needing to save the grown-ups. Traveling through various points in time while facing off against villains all seemed a lot like the Spy Kids series, which we've watched plenty.

Of course, these types of storylines have made for blockbuster hits and childhood favorites but I think Gen Z kids and their parents deserve more these days. Especially with folks questioning whether or not they'll consider it safe to go to a movie theater in 2020 or whether a VOD movie makes sense for them to rent at home.

It's crazy how little we get of the raspy sounding, cloak wearing, "bad guy" Opal, who's actually a woman. If they do end up making a sequel, we'd likely watch it in hopes of them digging deeper into the story and us seeing more from this faceless character lurking in the shadows, who really doesn't do much of anything to be the main protagonist.


Funny enough, I (almost) wish this was a tween series on Disney Plus, instead of a movie. With different villains, almost like The Power Rangers. Lol. Every time Opal would say something in her distorted voice I thought of one of those crazy looking, evil creatures from the cult classic series. 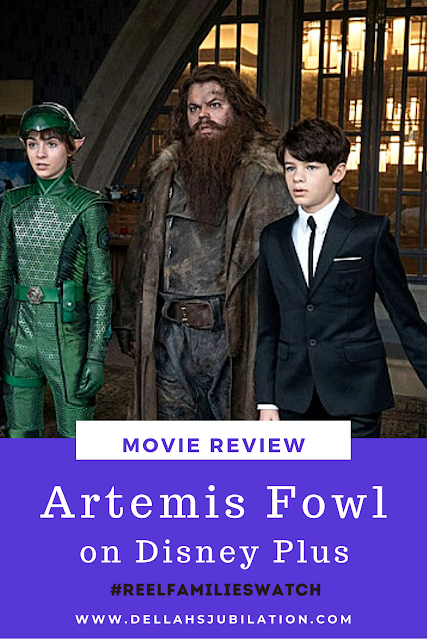 Here's What We Loved

Josh Gad! Let's just start with him, because he's one of our family's favorite characters and one of the nicest guys we've sat down to interview for both Angry Birds and Frozen 2. Just so down to earth, and someone you'd love to hang with.

You've likely never heard of a giant-sized dwarf, but if anyone could play the part of Mulch Diggums, the dirt consuming, narrator of the movie it was Josh Gad.  As the misunderstood con-artist I feel like his character would be that guy who'd keep you on your toes, make life interesting, and have you laughing non-stop. Except for when he's unclenching his huge jaw and farting.

Chris and Tristan thought it was so weird but both got a kick out of seeing him in this role and they laughed about it in our trailer reaction video. Clearly, he's no Olaf this time around, but he might still like warm hugs.

I'm not sure how the relationship between him and Artemis Foul evolves in any of the 8 books in the series, but I'm hoping if there does end up being a sequel, that we get to see him do way more!

Hubby and I love Judi Dench as 'M' in the James Bond Movies so I was excited to read she was playing a villain of sorts. At 85 years old, she still has a great presence on screen and her "Get the Four Leaf Clover, Out of Here" line had us crack up, a very Disney way to not be vulgar. In her role as Commander Root, she tries to stop their secret world from being discovered by humans. 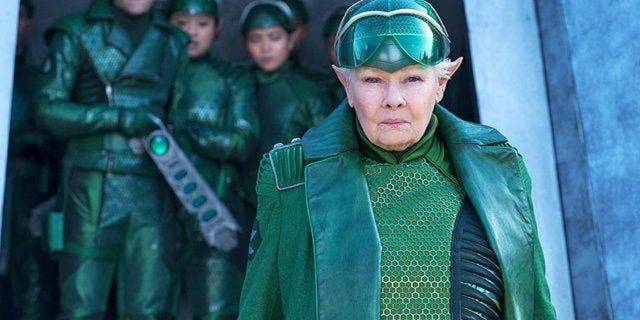 If you need something to watch with your tweens and teens on a laid back weekend at home, this movie works. Order lunch in, grab your snacks and pile on the couch with your family.

I had mixed feelings on the visuals, where the CGI was cool to look at, there was one point I remember not being able to tell if Artemis was actually played by human or not.

If you're into leprechauns, sprites, trolls, centaurs, hidden rooms leading to generations of secrets and cool relics from another world, this has all of that and then some more.

I'm not sure if there should be a sequel, what do you think?

I feel bad for the folks who as true fans are really disappointed. I can't even imagine how we would've felt if the Sonic the Hedgehog Movie bombed in theaters. Our teen actually stood up and applauded at the very very end, only to run out of the theater to call his friends.
Which was a first!

So we completely get why a lot of movie-goers are going to be bummed about this. But It's not terrible.

I know we're going to have to watch this again because even though we liked it there were some parts left us thinking, "huh -- what just happened / what did that mean?". However, our tween Tristan said he'd watch it again, without hesitation, and asked me to order him the series of books or graphic novels. I'm just happy he suggested adding something to his summer reading list!

Our movie-loving friends have also written some fun and insightful posts you should check out! There's always a cool layer that someone else brings to light in a movie review, making you want to watch it again with their perspective.

Lola Lambchops
Tania breaks down if the movie is kid-friendly, especially for those under the age of 8.

Popcorn and Tequila
Shaye is giving you hilarious real talk on costumes, race, music and more!

Mama's Geeky
Tessa gives us the scoop on how the many changes from the book series didn't work for her.

Life in Pumps
Tomika shares thoughts from the point of view as fans of the book series.

Have you watched Artemis Fowl on Disney Plus Yet? What did you think?